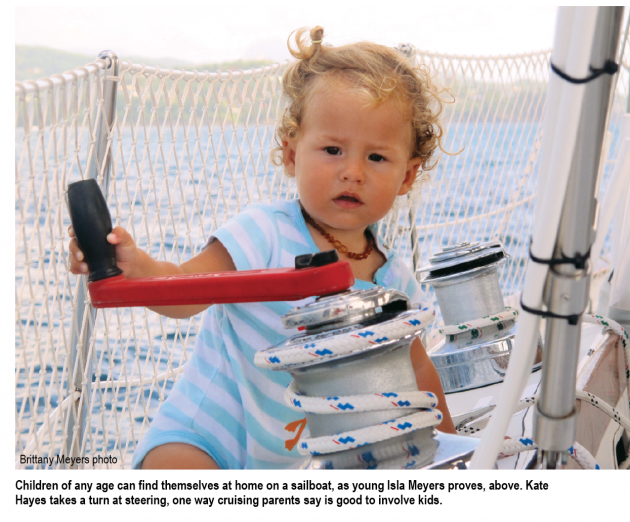 It can be intimidating to think about cruising with children. Most kids lead pretty structured lives from infanthood to college, so figuring out how to keep a family happy when the routine is going to change­-drastically-can be enough to make some parents put sailing with the family on perpetual hold. But parents who've been down the cruising-with-your-kids road report that with some planning and a bit of flexibility, it's not only possible to happily cruise with children, it's also incredibly rewarding.

"Cruising with a child, for us, makes it more fun," said Brittany Meyers, who lives aboard a Brewer 44 with her husband Scott and nearly 2-year-old daughter Isla. "We revel in seeing the world through our baby's eyes and watching Isla enjoy this lifestyle. She is clearly thriving in it, which makes all the work it takes totally worth it to us."

For the Meyers, who sail their Brewer 44 in the Caribbean (although the family is currently taking a break on land while Brittany prepares to have twins), the biggest adjustment was learning to sail the boat nearly singlehanded.

"When you cruise with an infant or especially a toddler, typically one person has to be on baby duty at all times, meaning they are not available to help out as much on the boat," Meyers said in an interview via email.

The Meyers chose their boat with an eye toward easy shorthanded sailing and have made further modifications that help sailing continue while one parent is busy watching Isla.

Angela and Nick Hayes took both of their daughters cruising before they could walk, perhaps an easier time to introduce a child to sailing than when they've reached toddlerhood.

"We would take an old car seat and strap it to the back of the cockpit and set up a kid-sized umbrella to keep them out of the sun," Angela Hayes said. "Many times it was much easier for them to sleep on the boat than it was on land, but there were plenty of bottles and board books lost overboard."

Safety first
Of course, safety is paramount when cruising with kids. The parents we spoke to had different strategies and theories when it comes to onboard safety, but all agreed it is the first consideration when contemplating cruising with the family.

Jennifer and Bruce Gordon have cruised in Alaska with their children Richard, 13, and Carmen, 11, since the kids were born. Jennifer Gordon said they set a few strict rules for the kids from Day One: Always go down the companionway backward; one hand for the boat and one for you; leave the cockpit only at anchor or (when they were older) while wearing a life jacket and tethered to the boat; and always wear a life jacket on deck.

While the Gordons instituted a life jacket rule, other parents said they felt more comfortable with an excellent fitting harness for younger children.

"Our primary goal is to keep her in the boat, and if she's clipped in, she cannot go overboard," said Meyers, who prefers to use a harness and tether. "We do have a life vest that we use on the docks and during dinghy rides, but the harness is, bar none, what we would consider the most essential for extended cruising."

The Meyers and Hayes families also used lifeline netting as an added precaution.

When the weather is particularly foul, many cruising parents advocated that small children just stay belowdecks. All of them stressed the importance of discussing onboard safety with kids, regardless of their age.

"Every boat and family dynamic is different, so we all have different ways of keeping the little ones safe, but the kids need to be taught what is safe and why, so they can make good choices," said Cindy Wallach, who cruises aboard a St. Francis 44 catamaran with her husband and two children.

Plan to provision, but be flexible
Provisioning is another plan-ahead item that can make or break family cruising. A hungry crowd will not be a happy crew.

Hayes said she has found freezing as much as possible to be helpful. Not only did it help keep the icebox cold, it helped food last longer.

"Freeze your cheese, freeze your bread. If you can freeze it, do it. It helps keeps everything colder," Hayes said.

Hayes also would do as much of the food prep as possible in her home kitchen before the cruise, even cooking things like spaghetti noodles ahead of time and then bagging them so they only had to be warmed before serving, and there was no need to have a pot of boiling water on the stove. As much as she plans, sometimes even meal plans go by the wayside, she said. A hearty stew meant for a dinner on an overnight race (the family now often races together and then cruises afterward) might go uneaten if it's particularly hot outside, but cans of soup or sandwich makings can substitute in a pinch.

Hayes said she also made it a point to offer special foods to her daughters Kate, now 19, and Elizabeth, 16, when they were young cruisers.

"We would have some things that were kind of a novelty like those mini cereal boxes and licorice," she said. "You have to have some fun routines that are different from life on land."

Hayes said her "emergency pack" of foods that are always on the boat regardless of whether the family is cruising or racing include saltines, ginger ale, lollipops and frozen water bottles, which can also be used as ice packs in case of an injury. All of the foods help stave off seasickness and can be grabbed quickly for a boost.

Emma Mather, who sailed around the world over five years with her young family, also spoke of the importance of planning ahead.

"When (the kids) were smaller, I had a basket of juice, granola bars and snacks so they could help themselves, as I would not be able to make anything to eat," Mather said.

Meyers said provisioning includes healthy snacks for Isla which provide as much distraction as they do sustenance.

Passing the time
Keeping kids safe and well-fed onboard is obvious, but parents want their children to love sailing as much as they do. With kids who are "plugged in" and often highly scheduled from an early age, facing an abundance of free time aboard a boat, often with an active child, can be intimidating. Cruising parents said little imagination goes a long way.

"She is not quite independent enough to sit quietly and play by herself for anything longer than 30 minutes, which means we do a lot of entertaining by reading to her, singing to her and playing very basic, everyday things with her," Meyers said. "While it definitely takes more work, creativity and effort on our part, I must say these things have only benefitted our child's development."

For other parents, family games come to the rescue to stave off boredom.

"Sometimes we would be at anchor for days and not able to get off the boat due to weather, so we would learn new card games or play Uno, chess or board games," Mather said.

Crafting supplies were on most parents' must-have lists.

"A cruising family can never have too many pencils, notebooks, journals, markers, books or crafting supplies," Gordon said. "We always had a few simple games like Boggle and Scrabble and a few decks of cards."

As children learn to read, books can be a wonderful companion to help pass the time.

Hayes said she has fond memories and mementos of onboard craft projects, including an alphabet book in which every letter was representative of something the family was seeing or experiencing. "I still have it," she said.

A few beloved stuffed animals and small figurines seemed to be favored over electronic devices, but there is no substitute for good old fashioned imagination.

When they were young, the Hayes girls could be amused for hours with buckets of water and plastic toys on the cockpit sole, their mother said. When they were docked, the family would plug up the cockpit scuppers and fill the cockpit with water to create a private wading pool for the girls, Hayes said.

Playing word games like 20 questions or I Spy is easily done even in a pitching cockpit. Searching for marine life, other boats or describing the shapes that puffy clouds are making can be remarkably fun, even for a child used to playing video games.

"I imagined my high-energy boy going stir crazy in such a small space with limited outlets for large motor activities," Gordon said. "What I discovered was that, in fact, life is simpler in a small space where the furniture doesn't move. Our son and daughter have spend hours in their V-berth playing games, reading, wrestling or napping, or in the cockpit, noticing the natural beauty around us, learning how to sail and talking with us and each other.

"And as far as getting that gross motor energy out, that's what anchoring and running around the beach and the woods is for. The handrails on the ceiling making a perfect climbing apparatus for our daughter. She spent one season traveling around the boat like a monkey, swinging from one rail to the next."

And there is one cure-all for onboard boredom, Gorden said.

"When nothing else works, we get ashore as quickly as possible. Rain or shine, sleet or snow, there is nothing like a romp on land to set things right again."

As children get older, involving them in the decision-making and sailing of the boat is important, parents said.

"It would start with having them steer with an adult next to them and talking them through it for short stretches," Hayes said. "Then it might move on to releasing a jib in a tack. There are so many opportunities for mentoring. We always included the children in the planning of the trip. Children will feel vested if they have a say in the destination."

Sailing for life
Certainly there are challenging moments when cruising as a family, but parents said the experience is so enriching, any difficult times are worth it.

"I think when you spend a lot of time on a boat as a family, it strengthens your connection," Hayes said. "Sailing is an experience when you're always learning and it keeps your experiences fresh. Whenever you spend time with a person on a boat, I think you're always connected to that person for sharing that experience."

The Hayes girls not only learned to love sailing, they also gained valuable skills learned on board, their mother said. "They've learned confidence, teamwork, problem solving and they have an appreciation of nature and a sense of empowerment."

Not bad for a little cruising with mom and dad.