Keeping it simple, casual and fun in a relaxed fleet will make you enjoy your boat even more

For many sailors, the world of sailboat racing is completely foreign. It can be an intimidating experience filled with complicated rules, fancy gear and packed starting lines filled with yelling. And while that might describe the scene at high-profile events, most of the racing happening every week at yacht clubs and sailing clubs around the country is much different. 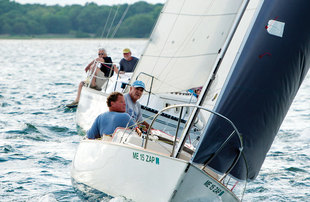 Racing can be fun, casual and a great excuse to use your boat more often, said Ken Quant, who helped revive a Milwaukee-area casual racing group called MAST.

“We get people who are not dedicated racers,” Quant said. “These are people who just want to get their feet wet at racing. They just want an excuse to go sailing, they don’t really care about winning.”

And it turns out there are a lot of people with just that attitude. Although the Milwaukee Area Sail and Trail (the trail part no longer exists but Quant said he’d like to work an off-season skiing component back in) group was formed in the 1970s, interest waned until about eight years ago when more and more people were interested in going sailing. Now the group has about 70 boats in the fleet.

“If somebody wants to try racing, don’t start in a big series,” he said. “Look for something that is short and simple. Out, in, done.”

Traditionally, weekend racing is more competitive, although some clubs are seeing interest in weekend club racing wane and Wednesday night racing become more competitive. Find out from fellow sailors what the level of competition is like before you jump in to a race. Most fleets offer jib-and-main divisions that do not allow boats to fly spinnakers, and Quant said that’s a good place for new racers to start.

“It’s just easier when you don’t have to worry about a spinnaker,” he said. “You can focus more on the racing stuff than the boat handling.”

For sailors new to racing, there is no better introduction than sailing on another person’s boat. Simply showing up on the dock before a race and asking around is usually fail-safe, but if you want to plan ahead, get in touch with the fleet captain or race organizer and ask him or her to spread the word that you’re looking to go sailing. If you show up with a six-pack of beer for after the race, your ride for the day will be even happier to have you aboard.

Some owners are wary of racing because it can be difficult to find crew. Quant said that Facebook is a great way to find crew, even for people reluctant to embrace social media.

“I posted on Facebook that I needed some crew and within five minutes I had four people reply.”

Many fleets offer lots of off-the-water social activities and that can also be a great place to connect with potential crew.

The MAST organization has three parties during the racing season in addition to off-season events. In addition, the group holds short seminars on basic sailing skills throughout the year, but particularly in spring.

“We keep it super simple and we don’t overlook anything,” Quant said. “We start with the most basic thing, even the difference between port and starboard. We keep it to about an hour and don’t get into the finer points of any topic. If we can get them 80% of what they need to know about it, they can find out the other 20% on their own.”

Since the MAST group is not affiliated with a yacht club, it has no dedicated committee boat. Members of the fleet take turns serving as race committee for the group’s Friday evening races.

Sailors whose clubs are having a hard time finding race committee workers or boats may want to consider a similar system in the interest of reviving a lackluster racing night.

But Quant said the biggest hurdle that keeps non-racing sailors from joining the fun is a lack of knowledge about the rules.

“Rules intimidate people more than anything,” he said. “I always say that the nuances will drive you crazy, but if you know the basics, you can go out, sail safely and not feel intimidated.

“The key thing is safety. The most dangerous thing on a race course is people who don’t know the rules. So if you can just get people comfortable with a few basic rules, they can go out and have a good experience.”

Quant created a primer on basic racing rules (available on www.sailingmagazine.net) that stresses basic right-of-way issues but he said all a sailor really needs to know to start racing is some common sense: if in doubt, just get out of the way.

“We’re all about having fun,” he said. “It’s not blood and guts. Racing has a very intense reputation with people who are cruisers. I think all cruisers think racers are really crazy. If in doubt, just get out of the way. It’s just a sailboat race. There will be another one next week.”

And that’s the beauty of joining a local racing fleet. Each week you can be out there, using your boat, meeting new people and having fun. If you do well along the way, that’s a bonus.

“What we’ve seen happen is that people are using their boats more,” Quant said. “It’s an excuse to use your boat.”

You can’t argue with that.

How to keep club racing fun

• Consider a grand prix division that starts first and is out of the way before casual racers start.

• Encourage sailors to serve on the race committee with compelling rewards.

• Don’t be afraid to change something that’s not working in mid-season.

• Set up a Facebook page or other system for owners to easily connect with potential crew and each other.

• Be available to answer any question, no matter how basic. Let owners know that everyone is welcome regardless of how much experience they have.

• Have a system for protests, even if it’s a casual one. Nothing kills a fleet faster than a bully.

• Check with a local club or ask on the dock about a more casual racing fleet.

• Try to sail with someone before taking your own boat out to get a feel for races.

• Start sailing in a non-spinnaker division to keep crew demands low and to allow you to focus on racing more than boat handling.

• Don’t get caught up in the nuances of the rules. Know the basics of right-of-way racing situations. If in doubt, stay out of the way.

• Remember, it’s supposed to be fun. Keep it that way.