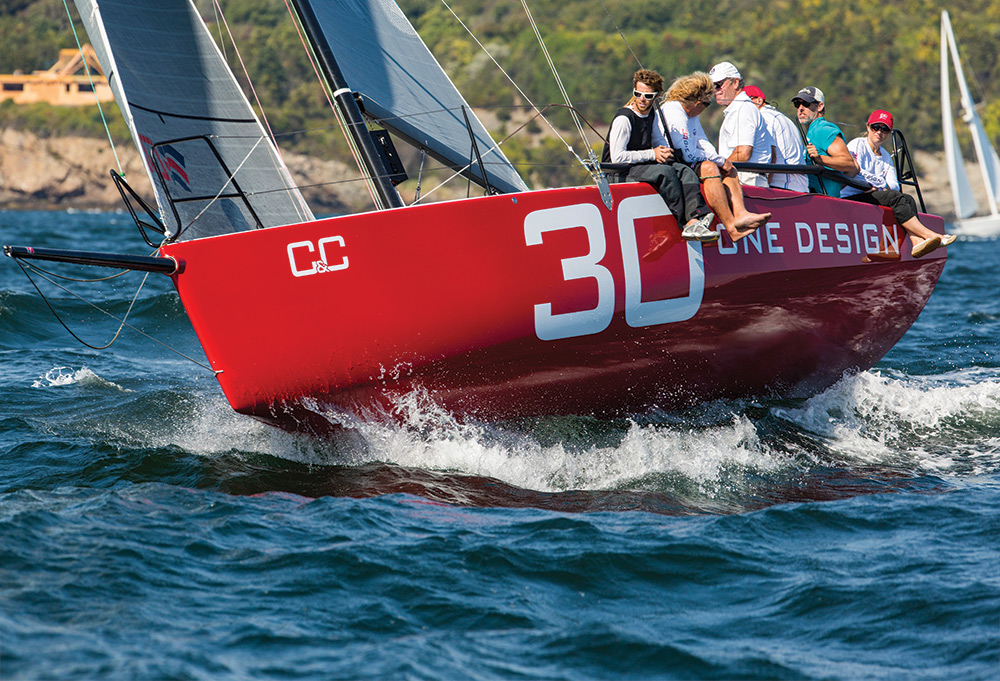 If you’ve ever imagined steering a rocketship but had your dreams dampened because you’re not a NASA astronaut, I have good news for you. The new C&C 30 one-design race boat provides fast acceleration, light-air performance and so much exhilaration you’ll be convinced this is exactly how it feels to hurtle through space as the hull planes across the water. And it doesn’t take long to grow accustomed to leaving slower boats in your wake.

On the last day of summer in Newport, Rhode Island, the excitement was palpable as admirers focused on the red Awlgripped hull No. 1 that was docked at Newport Sail along the Fort Adams State Park waterfront. A rendezvous of C&C sailboat owners was coincidentally in progress only a few feet away as we boarded the 30-footer for a test drive in 12 knots of balmy breeze. There had been plenty of dock talk about the simplicity of the C&C 30’s deck layout, and it wasn’t lost on us that simplicity is often a relative term. But until you actually take the helm of this technological marvel, you may not appreciate just how much of a difference an uncomplicated system of sheets, halyards and winches can make as the wind picks up, the sea builds, and you’re about to abruptly change course. Envious C&C fans gathered at the dock, excited to witness the company’s latest racer set out to strut its stuff. Our crew of seven was short by at least two for the ideal crew weight, the sailors having drifted off to race in the J/24 Worlds being held nearby. That meant Bob Allen, who sailed his C&C 24 to the rendezvous from Connecticut, would join us aboard to handle the running backstays. Local talent Emory Williams was on the bow, while C&C jack-of-all-trades Will Harris scampered about, making sure we didn’t break anything aboard the brand new boat. That was hardly likely to happen with C&C project manager Barry Carroll at the helm. Carroll apprenticed under famed builders Everett Pearson and George Hinterhoeller—the latter at the original C&C company—and then ran his own yacht design and build firm, Carroll Marine, for 20 years before joining the current management team. C&C’s Marketing Director Sarah Fawle rounded out the crew. Carroll shouted out commands and within seconds we were headed into the bay, tacking around slower boats and getting a feel for the sleek hull beneath our bare feet.

The C&C 30 is aimed at the thrifty gofast crowd. With a price point not far above the $120,000 mark, this affordable masthead sloop is positioned to compete with the best one-design boats in its size range. According to Carroll, the C&C 30 is being compared to his well-received Mumm 30 and the equally popular Melges 30 and 32.

“Keep in mind the Mumm 30 was new in 1997 and there have been plenty of advancements in technology that make a difference in a new boat of the same size and purpose,” Carroll said. “There’s a lot of carbon fiber and other strong but lightweight materials in this boat.”

Although the Mumm 30 is of pre-millennium vintage, the Melges 32 joined the racing circuit more recently, and its ability to plane in low-velocity winds has earned it plenty of hardcore followers.

“This boat replaces the Melges 32 in our minds,” Harris said. “We spent the whole summer prototyping. Essentially we tried to break it. What we found is that it’s quick downwind and the pros love it, but you don’t have to be a pro to sail it.” Billy Black
The C&C 30 is being built near Newport in Warren, Rhode Island, at a factory once operated by Pearson Yachts. At press time, 19 boats were sold and interest is growing in Rhode Island, the Annapolis area and in the Great Lakes. Two boats are bound for their new owners on the West Coast and potential buyers are arriving from northern Europe for sea trials.

Designer Mark Mills used advanced computational fluid dynamic research to develop the hull, which is vacuum infused so that it’s strong, stiff and lightweight. According to Mills, the chine keeps the wetted surface down in light air and increases stability in breezier conditions. As he put it, the only rule followed during the design phase was simple: Raw boat speed matters.

The boat has a carbon fiber mast by Hall Spars with stainless wire shrouds. The boom is aluminum to save slightly on cost and fitted with an 8-to-1 outhaul and one reef. The carbon bowsprit does not retract, but is removable for transport or tight docking situations. Below the waterline, the carbon fiber keel fin holds the torpedo-shaped leadbulb keel. (The keel retracts for transport.) The rudder is constructed of E-glass and carbon-reinforced.

“The flat-top main sail can dump air quickly if needed,” Carroll said. “Yet it has more sail area than a standard triangular sail and can be flown with less mast height, so you end up with more sail area up high.”

The C&C 30 has swept spreaders that provide more structural stability to the mast. The twin Dyneema topmast running backstays are easily adjustable with dedicated winches.

Volvo Ocean Race skipper Charlie Enright and pro sailor Jesse Fielding helped design the deck layout, which they describe as ergonomically easy and extremely efficient. All lines lead back to where they can be reached by the trimmer. Two primary winches control the jib sheets. The traveler spans the cockpit sole inches from the open transom. The entire deck is covered in a non-skid, rubberized material. C&C partnered with Harken to provide the hardware, some of which has been upgraded since the boat was first launched, and New England Ropes for the sheets and halyards. Hull color and brand of sails are two of the few decisions left to the owner. Other than that, the boats are identical.

“We’re trying to be careful, making sure this boat is built to precise specifications, that each boat is exactly like the next one, so that it can be raced as a one-design class,” said Randy Borges, president of USWatercraft, C&C’s corporate parent.

Being a one-design racer, the C&C 30’s interior is simple and functional for racing, with two cushioned settees, a portahead and an optional single-burner Origo stove.

The inboard Volvo saildrive 12-horsepower auxiliary engine is located under the companionway and is partially accessible by removing the fiberglass panel directly below the tubular, stainless steel companionway ladder. The engine can be fully accessed for major servicing by removing both the fiberglass panel and the ladder. The engine can also be serviced through side access panels to port and starboard. Gauges and the battery switch are affixed to the bulkhead just above the engine compartment door hinges. The fuel tank holds 6.5 gallons. The boat comes with a two-blade folding propeller.

There are canvas pockets for stowing small gear items that are screwed to the hull on both sides in the cabin. In an effort to reduce weight, there is no furniture. 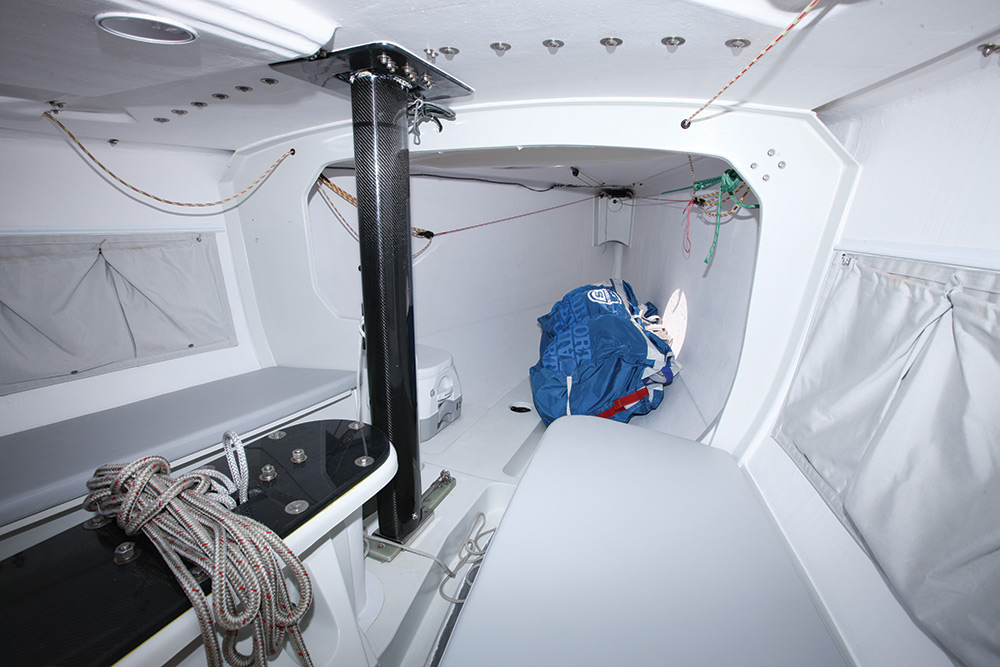