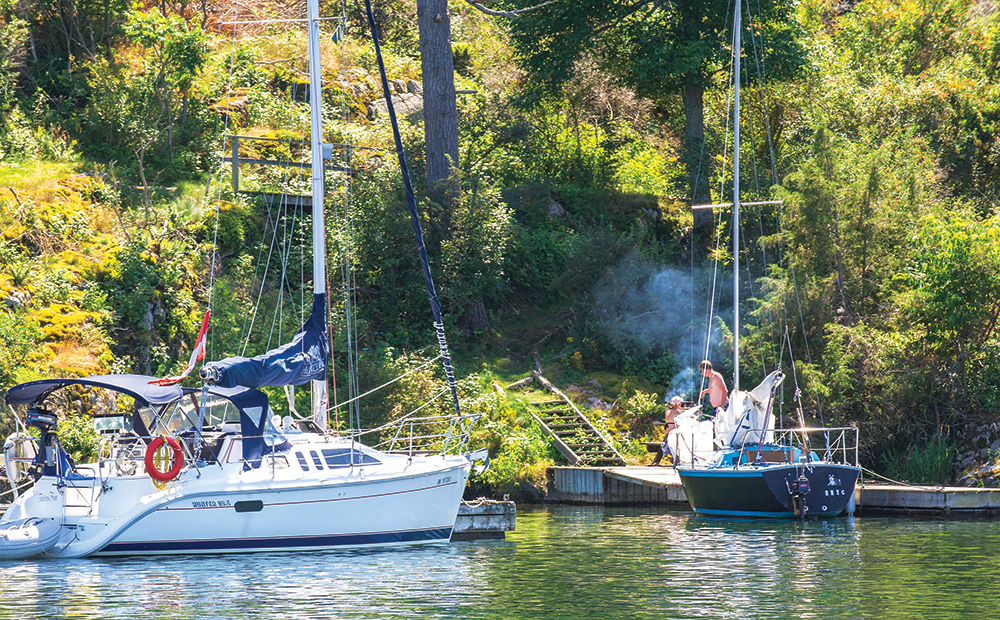 Cruisers tuck into Cedar Island, the ideal spot for a first night in the Thousand Islands if you're lucky enough to screw a berth.
Sharon Matthews-Stevens photo
The winds were off the starboard stern at around 15 knots, steady and warm on a sunny July afternoon, blowing up Lake Ontario out of the southwest. The water was flat in spite of the long fetch, protected by Amherst and Wolfe islands off Kingston, Ontario, where the Great Lake flows into the St. Lawrence River, starting its 650-nautical-mile journey to the sea. We were bound for the Thousand Islands, a world-class cruising ground with a wealth of anchorages and a multitude of delights.

Just off our port bow, Kingston sprouted from a green canopy of tree-lined streets and church steeples. A dome-topped building dominated the downtown shoreline along with the ruins of the 300-year-old Fort Frontenac at the mouth of the Cataraqui River where the Rideau waterway begins. As a history buff, I couldn’t wait to explore ashore.

A mere half hour after casting off at Portsmouth Olympic Harbour, we made our way east on a broad reach, surrounded by a fleet of Lasers slicing sun-dappled waters. From the wheel of Tankard, our chartered C&C 30, I watched the sailors with delight as I steered our way east toward Kingston, toward the fort, past a battalion of windmills standing sentinel over Wolfe Island. I glanced at Andrew Kelm, our skipper and guide for the next four days, reclining in the cockpit like a potentate in his own right, gesturing with my arm at the scenery about us, at the fleet of 200 boats scattered across the waters.

“Hundreds of good reasons to sail here,” I said over the wind whistling in the rigging. 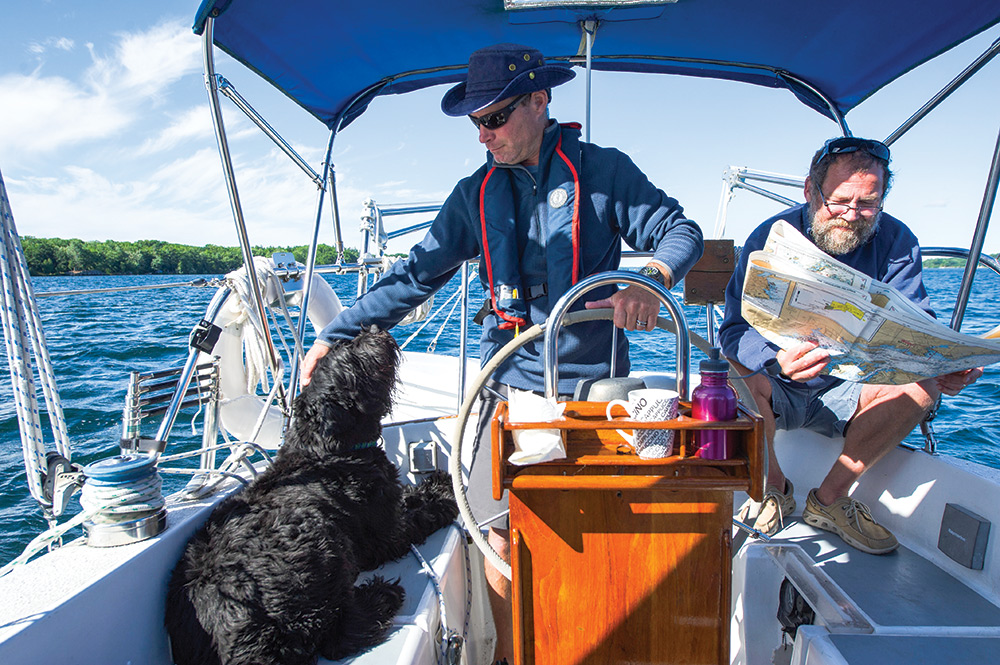 Skipper Andrew Kelm takes the helm of the C&C 30 Tankard with help from his first mate Mischa, a black Russian terrier.
Sharon Matthews-Stevens photo
He sat up and pointed dead ahead to Cedar Island where the red roof of a Martello tower, a unique stone fortification that was part of a line of defensive structures that lined this section of the frontier between Canada and the United States, rose up from a rocky expanse decorated by pine and spruce south of Fort Henry. Far to the east, blue-gray and misty in the distance, we could make out the outline of a multitude of islands.

“A thousand good reasons,” he said.

“There are rules,” Ross said. “To be an official island it has to have two trees and six square yards of grass.”

With only a few nights to cruise, we were just going to break the surface of this region that many consider among the best freshwater cruising grounds in North America.

We opted for a skippered charter, having booked through Ahoy Rentals out of Kingston, to get an insider’s guide to the archipelago, which also gave Kelm a chance to sea trial the boat and spend some downtime with his black Russian terrier Mischa. We could work as hard as we wanted and relax when we wanted.

The passage to Mermaid Island was no work at all, just sheer unmitigated pleasure. The weather gods cooperated all afternoon, with nearly clear blue skies and hints of cirrus. We skirted Navy Bay and Dead Man Bay, and sailed into open lake waters east of Wolfe. The low-lying green expanse of Leek Island off in the distance, lurking behind a nasty piece of water called Forty Acre Shoal, appeared first off our starboard then the port as we tacked backed and forth. At some point, the wind clocked to the east, fomenting possible weather for the next day, but making this passage a delightful jaunt with a boat speed of around 5 knots in 10 knots of steady winds. All too soon we arrived at the dock in Mermaid. Tankard sails downwind from Gananoque.
Sharon Matthews-Stevens photo
Two people waited to take our docklines. We set up the barbecue on shore and waited for the coals to heat up. As we did that, lounging on a picnic table and watching the sun fall over Aubrey Island, burnishing the waters in gold, I chatted with Pat Hedley, who was stretched out beneath a purple umbrella.

“What day is it today?” she asked. “We’ve been here since Thursday.”

The good news was that she didn’t know what day it was. Even better was the news that I had to think about it for a minute myself.

One more good reason for this cruise. There was a timeless quality here that, over the next couple of days, snuck up on us.

That was partly due to the geography of the Canadian Shield. Islands littered by gnarled pitch pine on their west ends, with juniper, blueberries, white pine and red oak on the interior contained secret places to drop the hook or dock. The 20 islands that form part of Canada’s Thousand Islands National Park have evocative names: one group is named for the Royal Navy ships that plied the Great Lakes, one for the captains who commanded those ships and one for members of the British Admiralty. You can anchor off Death Dealer or Dumbfounder, ply the waters of Wanderers’ Passage or Lost Passage, pull up beside a castle midstream or cruise past an island that was once the grand prize on “The Price is Right.”

It was easy to lose track of time exploring ashore, which we took advantage of when the weather didn’t cooperate. After a rolly night spent in Mermaid, with halyards clanging, tree branches whispering and rain pelting Tankard’s coachroof, we cast off and motorsailed across the pewter-colored water to Gananoque, a village on the river’s north shore.

We spent the night at the dock snugged down in a gorgeous emerald bowl courtesy of towering oaks and maples, by an attractive and historic settlement where Victorian mansions lined gently sloping tree-lined streets. The rain scaled back to a drizzle then to mixed skies late in the day. We browsed the boutiques housed in historic buildings, and enjoyed a fancy dinner in the elegant dining room of the Gananoque Inn, housed in a circa-1860s carriage factory. We ended the evening with a live professional play at the waterside Playhouse and after-show cocktails in Tankard’s cockpit. Gananoque's unique and historic architecture makes the trip ashore a treat.
Sharon Matthews-Stevens photo
It was a good thing for us that Gan, as the town is known, is not the only charming settlement scattered about the Thousand Islands. Alexandria Bay on the New York side was a village with colonial charm, great views of the river and a wealth of restaurants and party spots if you sought excitement. Far to the west, Clayton on the American side boasted lovely shops and restaurants in historic buildings and the Antique Boat Museum, one of the best marine museums on the continent. Kingston was a repository of history, culture and downright fun so appealing that you needed to discipline yourself. Tie up at Flora McDonald Basin downtown, hit one of the local pubs, explore the farmers market and you might never cast off.

But we did cast off, threading the boat through Wanderers’ Passage for the more open waters of the Canadian Middle Channel. With the sails hoisted and full and by, the wind increased and the waves grew throughout the day. Whitecaps first littered the water like errant snowflakes then filled in until we finally brought in the jib, still making 5 knots toward the Navy Islands.

“Wind has to be 20 knots,” I said to Kelm, who took over at the wheel as my wife and I enjoyed the breeze and the vistas of cottages crouched on granite outcroppings, candlesnuffer roofs, turrets on Victorian artifacts, wraparound porches, one cottage boasting Adirondack chairs set up strategically around a spot for a campfire. Boathouses dotted the shoreline by the water, with cedar strip and mahogany runabouts straining at docklines in the growing winds. We sliced through the cobalt-colored water past big islands sporting multitudes of mansions and islets where but two trees and a tiny cottage held court.

“Better than 20 right now,” Kelm yelled back. And then we turned south. “That’s the border,” he said, pointing at the sun-bathed shoreline dotted with farms next to green forests.

And just as suddenly, the winds were almost silent, the waves stilled in the lee of Camelot Island as we pulled into the dock at Endymion, another Parks Canada oasis. As we tied up the boat, Kelm’s dog cavorted ashore under the setting sun, which cast a warm glow spotlighting one lone cottage to our east past a dock populated by vacationing Quebecers in powerboats.

We fired up the barbecue and set the picnic table, which was balanced precariously on great pink and gray slabs of granite. I looked around at this little piece of paradise inaccessible to landlubbers, across an international border. I thought about the places we’d sailed and the places we hadn’t sailed. Either due to time constraints or due to sheer navigational challenges. One reality of cruising here is the fact that you might motorsail for as many hours as you fly beneath the main. I realized that I’d seen enough to ensure that this was hardly my last visit here. I’d begun to understand why so many people made this a nautical must-do. I remembered Pat Hedley’s words back on the dock on Mermaid Island.

“We started coming here when my youngest daughter was 6,” Pat said. “She’s 33 now. We missed one year.”

I stared out at the water, watching the sun bathe it in orange and red and purple. I took a deep breath, savoring the scent of pine, the aroma of grilling chicken.

“There are lots of good reasons to cruise here,” I said to Kelm, raising my beer in a toast. “A thousand good reasons.”