With sleek, modern looks this cruiser is kitted out for long voyages at a quick pace It was a sunny Southern Californian afternoon picture perfect for a test sail of the Moody DS54 and the ideal conditions for a revealing look at this offshore cruiser.

At first glance, the 54 is an impressive boat. Its contemporary look is apparent in the plumb bow and a nearly flat sheer, and the raised bulwark reduces the visual height of the cabinhouse but accentuates the high freeboard. Overall, this gives the boat a strong modern look.

It was immediately apparent as I stepped aboard that the Moody DS54 feels like a much bigger boat, giving a strong megayacht vibe. With a blend of German engineering, innovative design and craftsmanlike finishes, this offshore cruiser is shaking up the performance-cruising market. 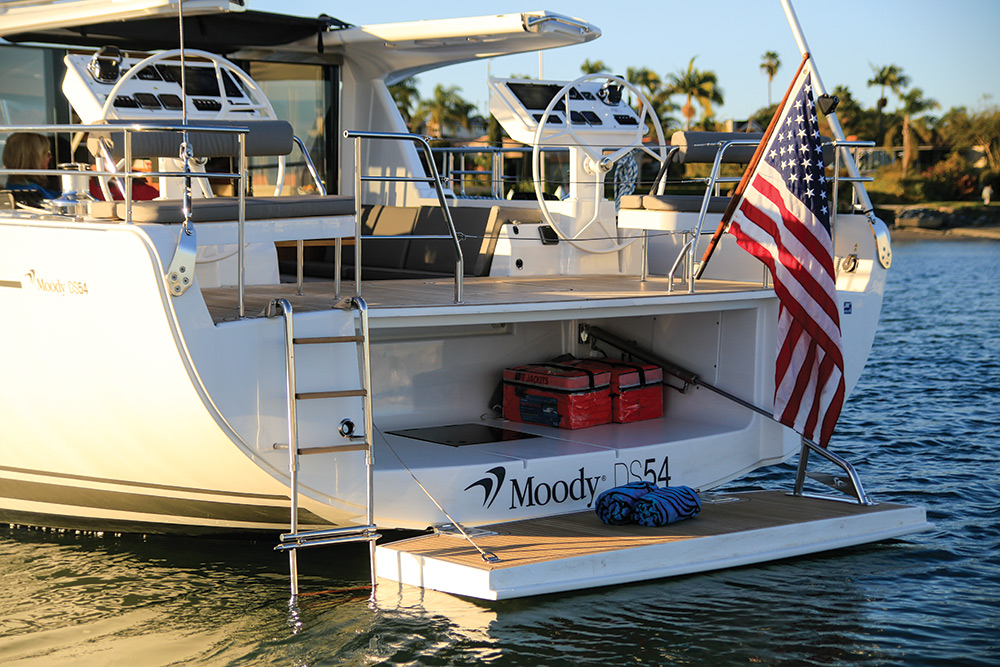 The transom lowers hydraulically at the push of a button to create the swim platform and allow access to the garage, which is large enough for a semideflated tender.
The details

The design is a blend of creative forces.

“The DS54 design was a collaboration between Judel/Vrolijk and Dixon Yacht Design,” said Jeff Brown, president of JK3 Yachts in San Diego, California. “They put a lot of fresh thinking into the design.”

Moodys are built at the Hanse Yachts production facility in Greifswald, Germany, on the Baltic Sea. In addition to the Moody and Hanse lines, the company also builds its Dehler line at the same plant. The DS54 hull is constructed with cored fiberglass with vinylester outer skin and the deck is fiberglass and balsa-core sandwiched with polyester resin.

The deck saloon concept puts the cockpit at the heart of the action. The wide cockpit features an integrated hard-top bimini with a retractable soft top to allow for sun and increased visibility of the rig. The 54 makes the most of its 17-foot beam in the spacious cockpit, which features a large teak table with a folding leaf set between opposing settees.

The twin helm stations are on a raised deck aft, but even with this height advantage, the visibility looking forward was slightly hindered by the deckhouse. Both helms have controls for the engine, electric winches, bow and stern thrusters and mainsail furler. There is Raymarine multifunction display on each helm. The DS54 is perfectly set up for singlehanding, whether under power or sail, from either helm, which also allows for redundancy in the event of a breakdown.

The transom door is hydraulically controlled by a button on the helm station or by a remote control. It lowers easily, and is reached via a lowering ladder that is integrated in the railing. The garage can be used for dinghy storage, however, the tender must be slightly deflated to fit.

Although it was a bit of a trick to get from the cockpit to the side deck, once making my way forward it was seamless on the wide teak side decks. There are few toe-stubbing obstacles, with folding cleats and flush-mounted hatches. The lower shrouds are on the deckhouse while the uppers lead to the rail, further opening up the side decks. The full bulwark, continuous stainless steel railing and plenty of stainless grab rails on the coachroof add security.

The beefy stemhead has double anchor rollers, with a deck-mounted windlass and large chain locker. The short bowsprit gets the anchor and chain out away from the plumb bow. Access to the forward cabin, which can be configured as a crew cabin or sail storage locker, is via the foredeck hatch. It’s a misnomer to say you’re going down below on the DS54 as there isn’t a companionway—the cockpit and the interior are on one level, separated by a sliding glass door much like a multihull. With the doors open, it’s the best of indoor/outdoor living. The saloon’s many large windows and overhead skylights give a panoramic view of the outside.  The sunshades use innovative latches with a central release, making it easy to get privacy or shade.

The attention to detail is evident in the saloon, with beautiful joinerwork and luxurious finishes such as the optional leather upholstery, the cherry finish furniture and Acacia floorboards. There is excellent headroom throughout the boat, and with my personal 6-foot 3-inch bridge clearance, the aft cabin was the only place I had to duck.

There are three interior layout options, and the boat we sailed was the galley-up version. This would make the cook very happy, as the large windows and overhead skylights filled the saloon with light.

The starboard side U-shaped galley features Corian countertops with integrated sinks, a three-burner LPG stove and oven and a front-opening refrigerator and freezer. The steps leading down to the staterooms are on the starboard side, which lead to the large sail locker storage room to starboard and a guest cabin with two single berths. The aft head is where the washer and dryer are located.

The master cabin, with a large centerline berth is in the forepeak with an en suite head and separate shower. There is plenty of storage in every cabin.

The 54’s systems—the heating and air conditioning, batteries, alternator and entertainment—are controlled via a center panel and iPad system.

The engine room has reasonable access to important systems, and the sound-proofing was remarkable—we couldn’t hear the engine running as we powered out. The test boat was fitted with the optional 11-kilowatt generator and extra capacity 243-gallon fuel tank. The double headstay allows for a roller-furling self-tacking jib and a large overlapping genoa. The DS54 is perfectly set up for shorthanded sailing, with all sail controls led back to the cockpit and controlled with electric winches.
Under sail

Leaving the berth at Shelter Island harbor was easy with bow thrusters and a powerful 150-horsepower Volvo D3 diesel. The Jeffa steering system was tight and responsive.

It was also easy to set sail as the DS54 is optimized for shorthanded sailing. All sail control lines including reefing lines are led back to a winch just forward of the helm and within easy reach of the helmsman. The boat can be easily singlehanded from either helm, whether under power or sail.
We unfurled the roller-furling 851-square-foot genoa from the headstay, and set off on a fast reach. The main on the Selden rig, and both headsails, are controlled with electric furlers. The test boat had the optional inner forestay that flies a roller-furling self-tacking jib, but with the wind at 10 knots with gusts to 15, the genoa had us scooting along at 8.5 knots on a reach across San Diego Bay.

Sailing upwind, the L-shaped, cast iron and lead keel with the standard draft kept the 54 on its feet. The boat felt sure-footed and solid as we made our way around the bay.

Although it was a beautiful day to be on the helm, using joystick-controlled steering from the inside stations would be priceless during inclement weather.

I reluctantly threw the helm over and we headed back into the bay. This cruiser has the legs for long ocean passages, and can do it in comfort and style, no matter the weather. Next time I’ll head out to sea and not come back.