It was no dark and stormy night, but the middle of a bright Florida afternoon when I spotted the mystery buoy. It was near our course and I had no idea what it marked, so I brought the engines back to neutral and we drifted while I issued orders.

“What the heck is a green nun with vertical white stripes? Where’s Claiborne’s cruising guide? Is there a copy of Chapman’s aboard?” I called out.

As my wife, She Who Must Be Obeyed, rummaged through the briefcase of books and charts I’d brought aboard, she murmured just loud enough for me to hear: “Perhaps it’s a submarine transit zone? Or a seaplane anchorage?” 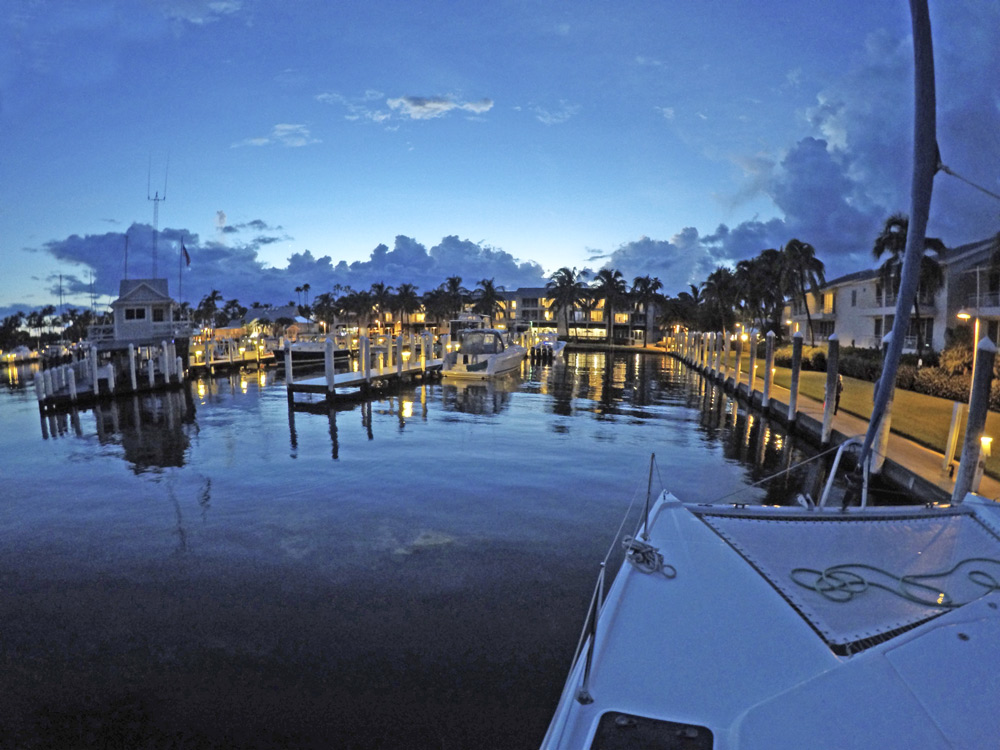 The sun sets over the South Seas Island Resort.

A few evenings before, preparing myself for the buoyage of our voyage, I had bored her senseless with all the never-seen buoys from the pages of Chapman’s Piloting and Seamanship. Now Chapman had bitten me back.

I grabbed the binoculars to look for a number on the mysterious buoy and, ta-da, problem solved. It was, in fact, a green buoy but the vertical stripes were surprisingly neatly applied streaks of bird poop. Somewhere, I knew there must be egrets laughing and giving each other feathery high-fives as they humiliated another skipper.

As I eased the engines back into forward, I could also feel SWMBO’s smirk in the hairs on my neck. I didn’t look around. Southwest Florida is home to the Shell Islands of Captiva and Sanibel.
Chris Caswell

We were exploring the waters out of Cape Coral, Florida, aboard one of the charter sailboats from Southwest Florida Yacht Charters, and it was proving to be an immersion course in buoy navigation. If Berlitz can teach you Greek in a week, cruising this area can help you remember everything you learned at that U.S. Power Squadron course ages ago.

The west coast of Florida is one of those secret cruising grounds that is overlooked because it is just so darn convenient. No foreign airports, no passports, no hassles with provisioning and, although you’re in the Deep South, not much of a language barrier.

What’s not to love about a bareboat charter destination that is within easy driving distance of half of North America and has warm weather, warm water and warm breezes year-round, not to mention smooth seas? It’s a bareboating paradise dotted with luxe resorts with great marinas, more getaway-by-yourself anchorages than you can count, and white sand beaches covered with the most amazing shells.

If you’re accustomed to bareboat chartering in the Caribbean, this is a different animal. First, there are no fleets of cookie-cutter lookalike boats. Southwest Florida Yacht Charters has an eclectic fleet of privately owned yachts, which it manages in its charter program. In its sail fleet, these range from a 29-foot Hunter to Island Packets and Catalinas of various sizes, and its power fleet is equally eclectic with Grand Banks, Carvers, Beneteaus and Mainships. Our choice was a Leopard 38 sailing cat appropriately named Southern Comfort which, in fact, was a perfect description of this four-stateroom, two-head yacht.

The boat was in pristine condition when we arrived and the staff member who did our check-out was thorough and knowledgeable on everything from the location of breakers to finding the best burgers. Even better, there were manuals for every piece of equipment aboard. Not sure how to work something? Look it up!

The SWFYC base is convenient to major airports and highways, and it’s on the doorstep of Pine Island Sound, a cruising wonderland. About 15 miles long and 4 miles wide, the sound is protected from the Gulf of Mexico by the barrier islands of Sanibel and Captiva. You can spend a delightful week without ever leaving Pine Island Sound, sampling a different anchorage or marina every evening, hunting for shells or simply floating in bathtub-warm water.

Two navigation tips proved to be invaluable advice, particularly to those of us new to the Intracoastal Waterway, which has its own navigation system. First was “red-right-returning-to-Texas,” a mnemonic device that makes sense out of why red buoys sometimes seem to be on the wrong side of the channel, especially for those of us who usually navigate by red-right-returning.

The second piece of advice is vital because these waterways are often deceptively shallow: “White is all right, blue review.” Look at your chart, and you’ll see that deeper water is shown in white, while shallow water is in blue. If you’re planning to tiptoe into the blue zones (which you will), review the chart beforehand. Carefully. These are thin waters and I don’t remember our depthsounder reading much over 10 feet most of the time. A good pair of polarized sunglasses can help, but common sense is even more essential. “Let’s anchor over there ... no, wait, I think those birds are standing, not floating.”

Although we went through channels where I couldn’t bring myself to look at the depthsounder, we never touched bottom, although even an occasional touch is rarely a problem because the bottom is generally soft mud or sand. Once you break the habit of sticking just to the main channels, Pine Island Sound and neighboring Charlotte Harbor have a multitude of little anchorages and protected waterways that can give you solitude even in the busiest months. Southwest Florida beaches a preface for whiling away the time with a good book.
Chris Caswell

A lazy start the first morning sent us reaching northward along the Intracoastal (toward Texas!) and we found that the appropriately named Picnic Island, which has an anchorage protected from southerly winds and a curving beach that hides an inner lagoon, was already lined with sportboats. Moving on, we had our first encounter with the dolphins on Pine Island Sound, which amused themselves and us by playing in our bow and stern waves. Talking to other skippers, it seems that dolphins simply love boats and nearly everyone on these waters has had several encounters with them.

We tiptoed into the blue area of the chart (after review) at Ding Darling National Wildlife Refuge on Sanibel Island and dropped a lunch hook in what seemed to be a set for the
Discovery Channel. This refuge has the largest mangrove ecosystem in the U.S., and is home to more than 200 species of birds including the bald eagle. An osprey family had built a complicated nest of twigs on a nearby piling, and we took the dinghy to examine it more closely, until the arrival of father osprey with a display of razor sharp talons and beak encouraged us to keep our distance while he gave us a yellow stink-eye.

Because Pine Island Sound is oriented roughly north and south, the predominant easterlies gave us a wonderful close reach that afternoon. This isn’t man-against-the-elements bareboating and if you’re looking for big seas, go elsewhere. Pine Island Sound has flat water and pleasant trade winds, which were perfect for our cat.

Our first night was spent at ‘Tween Waters Inn, a folksy resort on Captiva Island with a rustic marina. What started as a collection of fishing cottages in 1931 has morphed into a casual property that still caters to fishermen and families. While the docks seem to be original from the 1930s, it had 30-amp power and fresh water, always bareboat requirements.

After a long but easy sail, we opted to anchor the next night at Cayo Costa, a state park with a protected cove and excellent holding. Because it can only be reached by boat, its incredibly perfect beach isn’t clogged with tourists and you can often find yourself alone on it. The rangers run a shuttle to the gulf side, and a gentle breeze kept the anchorage cool and bug-free all night.

With a solid easterly the next day, we took advantage of the open waters and breeze of Gasparilla Sound for some power-reaching in flat water, with our cat hissing along nicely. Hunger took us to Cabbage Key, a private resort known for a cheeseburger that allegedly inspired Jimmy Buffett to write “Cheeseburger In Paradise.” Dubious as that distinction may be (dozens of restaurants also claim that title), the fact is that its cheeseburger is well worth the visit: “Heaven on earth with an onion slice!” 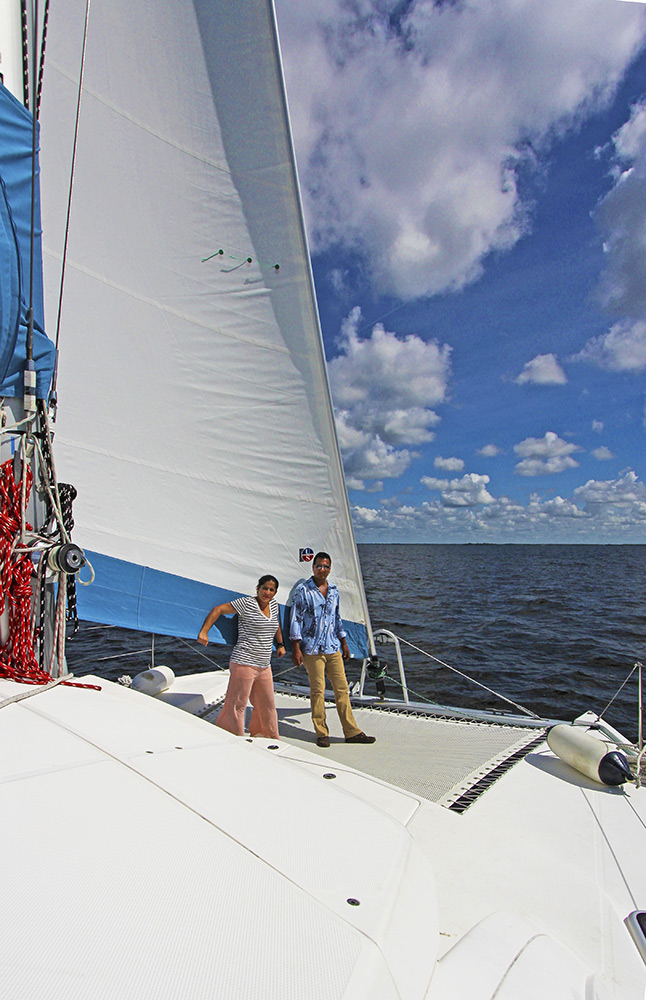 The crew rides the tramp across the Gulf of Mexico.
Chris Caswell

Another power reach the next day took us to the South Seas Island Resort at the northern tip of Captiva that boasts a truly great marina (dockmaster Charles Martz and his crew are superb) with everything fresh: docks, pilings and electrical.

Florida weather is variable and, as they say, if you don’t like it, wait a few moments. In the afternoon, we watched huge thunderheads build into white castles in the distance, and it wasn’t long before we were deluged by a biblical downpour. That evening, we were treated to a spectacular fireworks display of lightning.

The next day was pristine, however, and we went sailing in a fine breeze, with our crew sunning against the full jib while we sliced through the smooth waters. We had kept our side-tie at South Seas and returned in the afternoon, sated with sailing, tingly with sun and wind, and ready for shelling. South Seas has 2 1/2 miles of sparkling beaches for swimming and shelling, a 330-acre wildlife preserve and no fewer than 20 swimming pools, although we’re taking their word for it. Cute shops and endless activities on both land and water make this a great family getaway. Expect to see docile manatees nuzzle up to your boat to gently slurp the freshwater coming from your air conditioning condensation drains. It was the cook’s night off and we dined at The Pointe which, though casual, has a terrific menu. The skirt steak was amazing, shrimp scampi with fettucini not to be missed, and huge mahi-mahi tacos.  Trust me: Do not miss The Pointe.

With regrets, we headed for Cape Coral the next morning. It had been a delightful charter, with a good yacht, an attentive charter company, and a wonderful cruising area. Broad-reaching along our course back down the Intracoastal (away from Texas!) was a lot easier after several days of buoy practice. It had rained hard one day, so that vertically striped green nun was now washed back to a solid green, although there was a heron sitting on it as we passed.

I think he was grinning.

For more information on this charter visit Southwest Florida Yacht Charters at www.swfyachts.com or contact by phone at (800) 262-7939.