When helmsman Peter Burling buried the hulls of his 50-foot foiling ACC catamaran on the way to the start line, lost control and nosed-dived into Bermuda’s Great Sound, there was a chance that the America’s Cup was over for Emirates Team New Zealand. But like Humpty Dumpty, the shore crew picked up the carbon fiber pieces and put the fragile cat back together again, and the Kiwis went on to dispatch the British Land Rover BAR team in the challenger playoffs semifinals, and the Swiss Artemis team in the finals to win the Louis Vuitton Cup, setting up a rematch against Oracle Team USA for the America’s Cup in June. Emirates Team New Zealand pitchpoles during the Louis Vuitton Challenger Playoffs semifinals in Bermuda in June. The team went on to win the right to challenge for the America’s Cup.
ACEA 2017/Gilles Martin-Raget photo

“It’s the first time we’ve sailed these boats in this much wind, and it’s absolutely mind blowing,” said Ben Ainslie, skipper of Land Rover BAR, after his opponent’s capsize. “These boats are so twitchy, they have to be perfectly sailed, but when you get it right, it’s rewarding.”

The America’s Cup Match, a battle to be the first to seven wins, was to begin June 17. Defender Oracle Team USA enters the match with a point already in the win column, thanks to a bonus point from winning the qualifying round.

If it’s any indication of how the Cup will go, the quick-moving challenger series offered a preview, living up to the hype by providing plenty of thrills and spills, and arguably some of the closest racing in recent history. It was a contest of perfection—teams paid dearly for even the slightest mistakes, and winning the start often meant winning the race. Like any good match race, tactics played a role more than predicted, yet it often came down to pure boat speed and never falling off the foils, with a “100% fly time” the goal. For teams to achieve that they first had to select the right foils for the often variable wind conditions before the start of racing.

“They were a bit quicker than us in the last race,” said Nathan Outteridge, skipper of Artemis Racing, on the last day of the finals. “We knew they were going to be quicker with their set up in the light winds.” Outteridge and his tactician Iain Percy dominated the starts against Team New Zealand in the first-to-five challenger finals, winning all but one, and while they may have had a boat speed advantage in the heavy air, overall the Kiwi design proved faster. It didn’t help that Artemis was forced to retire from a race when Outteridge became the first America’s Cup skipper to fall overboard during a race.

“The boat stood up quicker than I expected, and the terrain underneath disappeared. I just wished the guys good luck as I surfaced from the water, and tried not to get run over by Pete as they bore away around the other mark,”  Outteridge said. “It happens often to us in training, but it was unfortunate that it happened on such an important day.”

Going into the final day of racing, the Kiwis were up 4-2, needing only one win to clinch the America’s Cup berth, and the lighter wind gave them a speed advantage over Artemis. The New Zealand team had taken the biggest risk in the design of its boat, with obvious differences such as using cycles instead of grinders to generate the hydraulic power needed to control the foils and wing sail, and using computer touch pads instead of buttons and levers on the wheel to adjust the foil positions, all of which proved to be advantageous. But it might be the shape of the foils that makes the biggest difference.

“Their light-wind boards are quite interesting, they look big but their area is actually quite small, and the higher pitched foils are really efficient upwind,” Outteridge said.

Although the Kiwi team may have made the right call with its radical design clearly having a speed advantage in the more moderate wind that is likely to be the conditions in Bermuda in late June when the Cup is raced, it is uncertain if opting out of training with the other teams will have given their young skipper enough experience to face Oracle’s Jimmy Spithill, one of the best match racers in the game and a veteran of five America’s Cup. 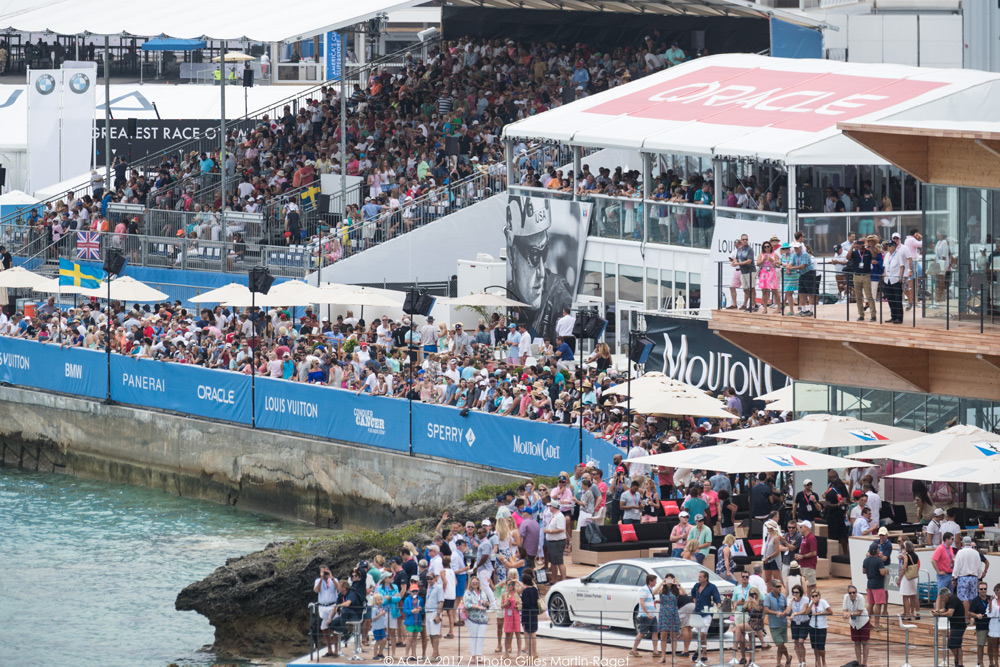 Fans line the Bermuda race village to take the action and cheer on their favorites, with the finish line located just feet away.
ACEA 2017 / Photo Gilles Martin-Raget photo

In the final race, Burling won his first start over Outteridge, and led into mark one for the first time in the series. From there, the Kiwis showed blazing speed, extending around the racecourse for what appeared to be an easy race win.

“We feel like we’re in great shape to take on Oracle Team USA now,” Burling said after crossing the finishing line. “Artemis Racing has been an amazing opponent. They’ve pushed us incredibly hard. They’ve put us in good shape for the America’s Cup.”

It’s likely that Oracle will have some tricks up its sleeve, and the team has been keeping close tabs on its opponents throughout the series and has the ability to make adjustments. In 2013, in San Francisco, Oracle managed to make design changes that led to one of the greatest comebacks in sport, racing back from a 1-8 deficit to win 9-8 over Emirates Team New Zealand. While crushing at the time, the 2017 Kiwi team doesn’t appear to be scarred from that experience.

“I think the lessons we learned out of San Francisco has made us stronger going forward,” said Glenn Ashby,  Emirates Team New Zealand wing trimmer and skipper and the only holdover crew from 2013. “The team has been rebuilt from the ground up and what has been created is a stronger unit than we’ve ever seen before. The motivation going forward is certainly there.”

The Oracle-Team New Zealand match-up is fueled by a longtime rivalry that hasn’t gotten friendlier. The Kiwi team has been the only challenger to hold out on several Cup changes proposed by the defender. Their Kiwi countrymen, who hold a stake in the team by virtue of the fact that it is partly funded by the New Zealand government, have been vocal in their belief that Oracle has stacked the deck in its favor—a long-standing benefit of the defender’s position. Can a country of fired-up sailing fans who won’t be satisfied with anything less than the America’s Cup back on their home turf provide enough encouragement to drive Team New Zealand to an America’s Cup win against a well-funded and well-positioned defender—a true Goliath—against the odds?

Hang onto your foils. The Cup is in for a high-flying ride. --Greta Schanen