Jeanneau Sun Odyssey 449: Taking ergonomics to the next level with walkaround side decks and an innovative interior packed into a powerful hull, this new cruiser is challenging the status quo

You can’t ask for better weather conditions for a boat test. It was 85 degrees with an east-northeast 18-knot wind blowing across Biscayne Bay as I walked out the Key Biscayne Yacht Club docks. All eyes were on the brand new Jeanneau Sun Odyssey 490 hull No. 2 pulling in, having just left the Miami Strictly Sail Boat Show docks up the cay from the club. From the full-length chine, slab sides, moderate freeboard and wide beam that stretches from the full bow sections aft to the transom, the boat exuded power. I couldn’t wait to get sailing. I stepped aboard and was greeted by longtime Jeanneau representative Paul Fenn, and the first thing I noticed was the wraparound deck. This concept is a paradigm shift in sailboat cockpit design. I walked straight back to the helm and walked into the cockpit instead of clambering over the cockpit coaming, stepping down onto the seat before reaching the cockpit sole.

The SO490 and its recently launched little sister the SO440 are designed by Philippe Briand with an interior designed by Piaton Bonet Yacht Design. The boats are built at the JTA factory in Les Herbiers, France. The company has long been a leader in vacuum bag technology, and the hulls are built light and strong using what the company calls third Generation Technology to reduce VOC emissions.

While the SO490 is a cruiser by nature, Briand’s raceboat design background shines through. The 490’s double swept-spreader rig is available with 1,188 square feet of sail area or the performance rig with 1,307 square feet.  One of the first things I noticed was the angle of the boom created by the lower gooseneck. Not only does this make reaching the mainsail easier it also created enough room in the cockpit for the tall dodger. There’s no need to duck to go below, even for a very tall sailor. The SO490 side decks slope aft to end in the cockpit, allowing sailors to walk from stem to stern and not have to step over the coamings to enter the cockpit.

The walkaround deck is created by sloping the teak side decks as they run aft, ending at the same level as the cockpit sole. The cockpit itself is huge thanks to the 14-foot 8-inch beam that carries through to the transom. A clever design concept is the optional seat backs that can easily fold flat to create lounge pads. The folding cockpit table on the test boat had the optional 12-volt cooler, which is removable so you can take it with you for picnics ashore.

The transom folds down electronically to create a large swim platform with a telescoping ladder and provides access to the life raft. There is an abundance of on-deck storage: deep lockers under the helm seats, a large locker aft under the sole that can be used for the optional generator, under both cockpit seats and forward where there is a deep anchor locker and separate exceptionally large sail locker. I found the sheet bags that are tucked aft of the seats handy to keep the cockpit tidy.

All deck hardware is Harken, from the optional electric winches, to the blocks and tracks. The test boat had the a integrated bowsprit that is not only a place to tack the A-sail but also gets the anchor out away from the bow so there’s no accidental dings when raising. The electric windless is a beefy 1,000 watts. Walking around the deck was easy with few tripping points as the lines are led aft underneath the deck and the hatches are flush.

The twin helm stations are located all the way aft and I found it comfortable to sit either on the helm seat or outboard on the coaming. Visibility is excellent. The engine controls are at the starboard helm and the mainsheet winches are easily reached from either helm. The test boat had the The dual helm stations are located all the way aft, and the helm controls are on the starboard side. The mainsheet winch is close at hand.
optional composite wheels, which felt comfortable and looked sharp. The distance between the helms means that you have to let go to switch to the other wheel in tacks. The twin rudders ensure that one will be in the water at high angles of heel, especially important with the large beam at the transom. Docking is made easier with the retractable bow thrusters that come standard. The Raymarine nav display was easy to access and displayed chart and performance information.

Jeanneau has always been known for bright and well-designed interiors, but SO490 has taken design to a new level. Stepping down the companionway I was immediately struck by how expansive it felt and it took a minute to There are no upper cabinets in the saloon, which make the cabin bright and airy, and Jeanneau has designed creative storage under the cabin sole and behind the settees, such as this wine locker.
realize why. There are no lockers at eye level, just like the trend of removing upper cabinets in home kitchens. Instead, there are windows in the hull, allowing you to look out at the ocean. In all, there are eight large windows, six opening ports and six flush deck hatches that flood the interior with light. To make up for the lost storage, Jeanneau has tucked ingenious cabinets in every nook and cranny—under the U-shaped settee and floor boards, and there is even bottle storage behind the backrest.

The port side U-shaped galley has a two-burner stove or the optional three-burner with grill. On the test boat, there was the optional pop-up microwave cabinet. The counter tops were Corian and the drawers were soft close. The double stainless sinks are deep and the refrigerator is top opening with an option to add a door. There is space for an optional second refrigerator or freezer.

The forward facing navigation station is just to port of the companionway and is set up to be a breakfast nook with an additional seat facing aft. But the nav station itself is no afterthought. There is plenty of storage for charts, gear and books. There is also easy access to the electrical panel and nav gear.

The 490 is available in four layouts: three cabins and three heads, four cabins and four heads, five cabins and three heads, and two cabins and two heads, which is the one I sailed. In this version, there is a large owner’s cabin forward, an aft double-berth cabin with a workroom opposite. The second head with separate shower is just to starboard of the companionway. This layout is clearly intended for liveaboard sailors.

The owner’s cabin forward takes up almost a third of the interior, and I was struck how livable and creatively laid 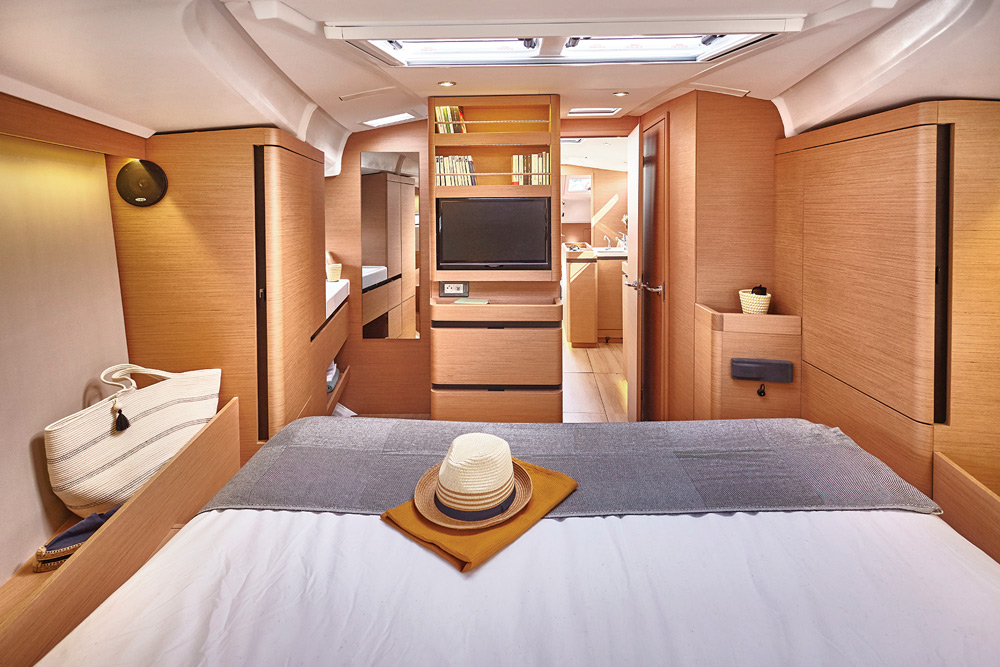 The owner’s cabin features a center bureau and media cabinet that separates the shower and dressing area from the head.

out it was. As you enter, there is a head with sink to port. The V-berth is not shaped like a V, but is a full-sized double berth that can use regular sheets. On the starboard side of the cabin is what I would call a dressing area, with a mirror and dresser out board and separate shower stall. There are full-sized hanging lockers port and starboard.

“It feels very much like a hotel room, people want to sleep on a real square bed,” Fenn said. “ With all the storage and lockers, it’s easy to feel at home here.”

We headed out into busy Biscayne Bay with the 57-horsepower Yanmar easily pushing the boat along. We set the main and unfurled the 155% genoa and set off across the bay. The wind was a typical south Florida 15 knots, with puffs in the high teens. The boat felt sure on its feet with just enough weather helm to provide good feedback, and when the puffs hit you could feel the chine kick in as we zipped toward Miami at 8-plus knots. Even though the test boat was outfitted with the 5-foot 4-inch shoal keel and the standard rig package, there was plenty of power and we even managed to pass a 50-foot cruising cat that was also out on a test sail.

Jibing was easy, as I threw the helm over. The midboom mainsheet uses a Y-bridle system, giving the boom good control without a track. Giving up the helm, I headed up to the foredeck. Even though we were rail down, it was like a walk in the park to get to the foredeck with the walkaround decks. We rolled up the jib and doused the main and reluctantly headed in.

The Sun Odyssey 490 is a comfort cruiser with a powerful sailing package that is sure to start a trend.