“We just took such good care of each other. There was no barking orders. Instead it was ‘Thanks for doing such a great job on the foredeck.’ Everyone was so kind to each other.”

That’s not to say there weren’t trying moments for the team. After the race checkpoint in Bella Bella, a log was lodged under the boat in the middle of the night. The team opted to slow down wait until daylight to assess and fix the issue. 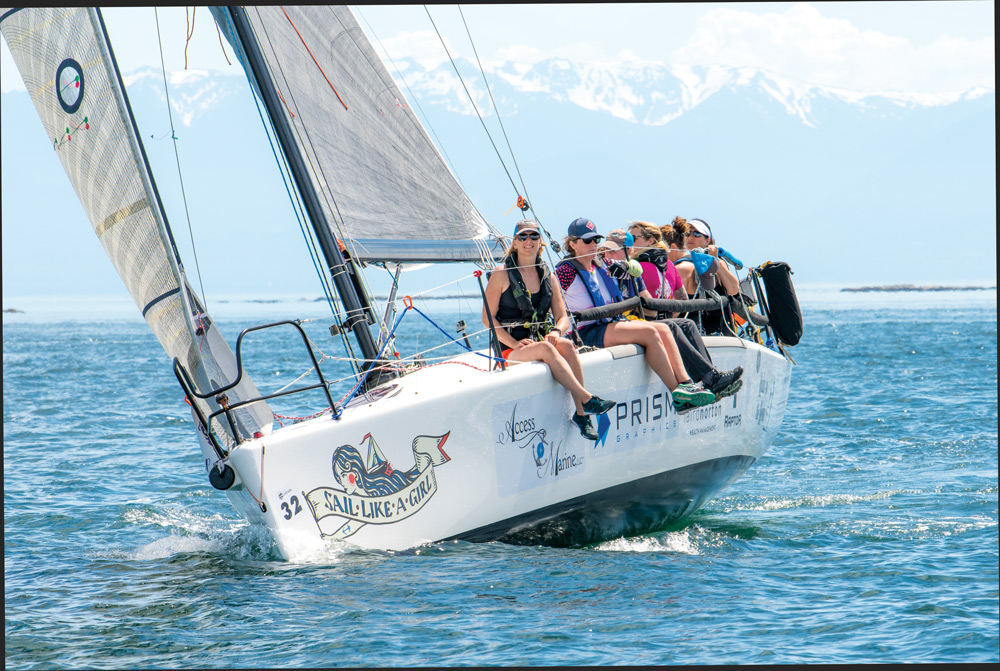 It was all smiles on the rail—sometimes—for the winning team.

The team was rewarded with an excellent position report on the race tracker when they did get back into coverage and buoyed by a strong breeze just 25 miles to Ketchikan, where they were able to do some of the best sailing of the race.

“We never went into it to win, but when we realized we were in first place, we would have felt bad for the people who helped us so much if we lost it at the end.”

But they didn’t lose. In fact they became the first monohull to win the race as well as being the first all-woman crew to do so. After tying up, the team jumped on the dock and rang the bell signaling their finish together. And if they thought they support they saw on the dock at midnight was something, it was nothing compared to what happened after the race, Goussev said.

“What really overwhelmed me was the response we had online and in the news and the effect that a group of women had on a greater community,” she said. “It was really touching and humbling, and an experience I just never expected.”

As much as Goussev is proud of the team’s accomplishments, she admits she wishes it wasn’t such a big deal that it was a group of women sailors who won.

“It shouldn’t be noteworthy, but women are still under-represented on the start line,” she said. “I wish more women would be motivated to not just be crew, but to make the tactical decision and to feel that. It’s really fun to be in charge and call the shots. There is nothing more gratifying than to be the leader of a team like this. Women can be powerful and competitive in a sport like this. I hope we inspire people to take that leap. Do something courageous. Sure, it’s scary, but do it anyway and tackle it with everything you have.” 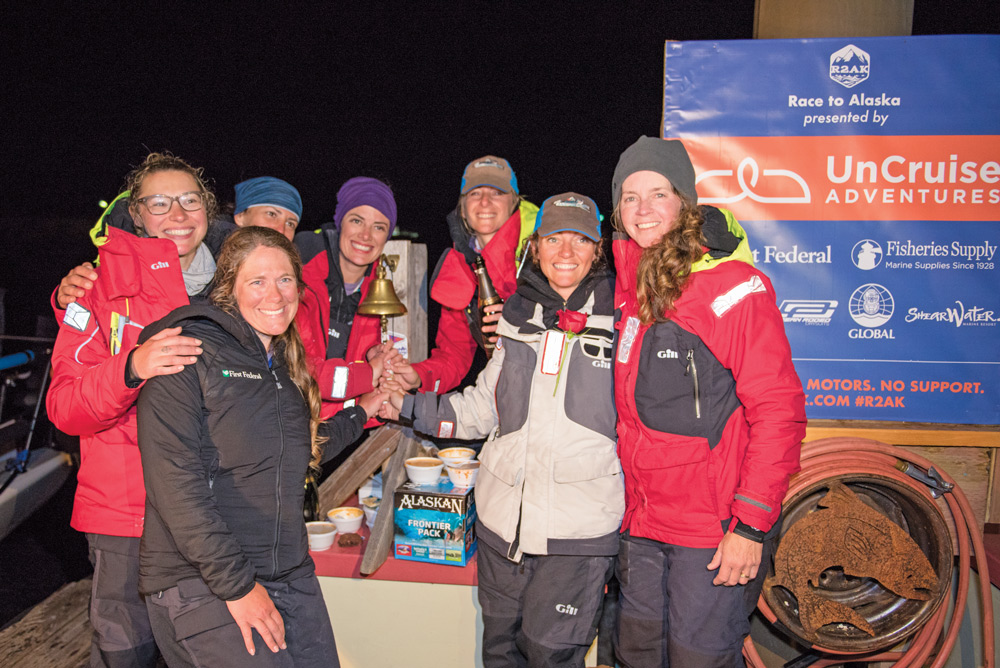 The winning team rings the bell at the finish. Race to Alaska photo

The team, which worked equally as hard at fundraising by selling T-shirts and hosting parties as they did training for the event, had a handful of in-kind sponsors and First Federal provide some financial support to become a title sponsor. The sailors decided to donate the winnings after they covered boat expenses—about $5,000—to the nonprofit Pink Boat Regatta, which raises money for breast cancer research. The charity was chosen not just because the sailors are supporters but because the entire crew was inspired by family and friends who have had breast cancer. The names of women close to the crew who had been diagnosed with breast cancer were written on the mast down below and the team drew strength and inspiration from the battles they knew these women had faced, Goussev said.

“It was important to us to do something beyond just sailing a race,” she said. “We hope our win can do something more than benefit us. Our reward was in finishing in the manner in that we did.”

For complete results of the Race to Alaska, go to www.r2ak.com. Sail Like a Girl has a website at www.saillikeagirl.us.