Afresh trade breeze was gusting across Florida’s Biscayne Bay and we unfurled the screecher to make the most of it. The sail filled and the Seawind 1260 picked up the pace as we headed toward Miami. It was the perfect setting to put this new offshore cruising cat through its paces. The large wraparound windows make not only for a bright interior, they allow for almost a 360-degree view from the twin helms.

Australian Seawind Catamarans was founded 35 years ago by Richard Ward, who has used owner feedback to refine the company’s line of cruising catamarans that ranges from the 38-foot 1160 and the 1190, a 39-foot racer-cruiser, to the 53-foot 1600, with more than 600 launched. The 1260 was launched as a powerful bluewater cruiser that can be easily doublehanded.

“All of our catamarans are built to withstand the harsh conditions along Australia’s eastern coast,” said Seawind’s Shane Grover. “Our boats are meant to sail well in the 25- to 35-knot wind and 6-foot-plus seas common on the Tasman Sea.”

At 42 feet, this midsized cruising cat replaces Seawind’s 1250 and it takes full advantage of advancements in boatbuilding technology and composite materials, resulting in a stronger and lighter boat, with displacement coming in at 18,077 pounds.

“Built in Vietnam, the boats are vinylester-infused with modular hulls that are glassed and tabbed to create a rigid and strong boat. There’s no plywood on our boats,” Grover said. “You won’t hear any creaks or groans underway.”

Multihulls are not known for their beautiful sheerlines and shapely cabinhouses, which instead often resemble superstructures on aircraft carriers. The Seawind 1260 stands out with its sloped bows and low-profile deckhouse, giving it a svelte look—a result of thoughtful design that rewards speed and seaworthiness. It’s a case of function dictating form. 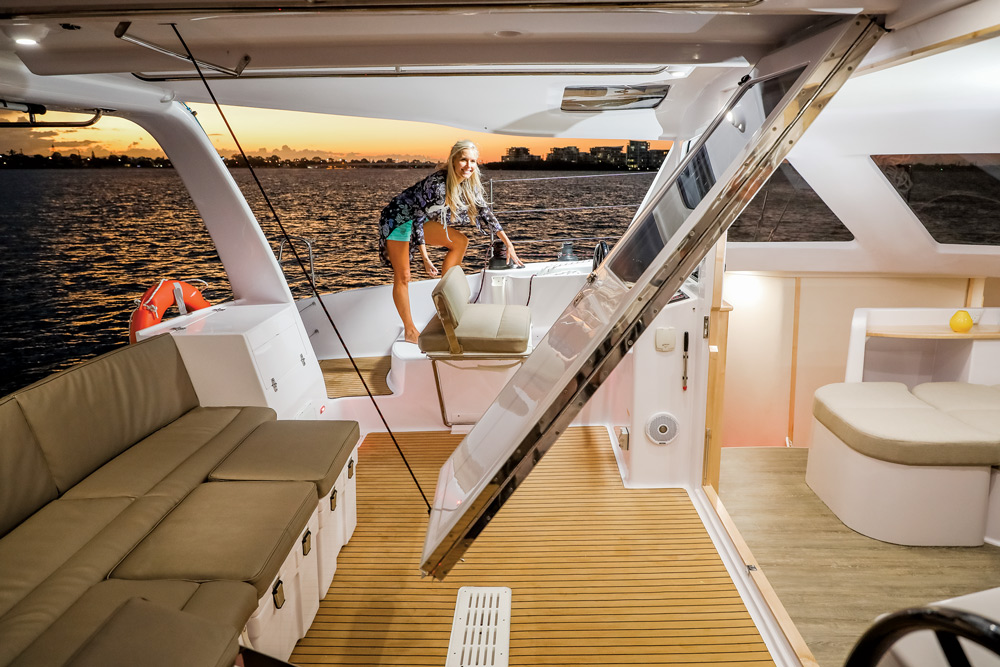 The three-panel companionway door quickly folds and then is lifted up into a recess in the hard-top bimini and locked in place. This opens up the saloon and the aft deck, making one living space.

“The tapered bows help reduce windage,” Grover said. “None of our boats in the Caribbean flipped in the hurricanes last year.”

The low-profile cabinhouse is also a result of function as the saloon and cockpit soles are on the same level, and while that might not be unusual, having twin helms in the cockpit is. There’s no climbing narrow stairs up to a helm station that needs to be perched high enough to see over the cabinhouse. That’s because the  extended large windows provide 360-degree views from almost anywhere in the cockpit, including from the helms.

There are windows in the aft end of the cabinhouse just forward of the helms that  lower with an electric switch to increase visibility and also allow the chartplotter to swivel to face the saloon for keeping an eye out while in the interior of the boat. The windows throughout the boat are high-quality tempered glass rather than plastic that can craze and fog over time.

The helm stations are the command center of the boat. All control lines lead aft to winches at the helms. One of the benefits of twin helms is that you can steer from either side depending on weather conditions or docking situations.

The cockpit makes the most of the 22-foot 3-inch beam. Along the aft cockpit under what the company calls a Targa arch is a settee flanked by a grill to port and an outdoor sink to starboard, both situated in lockers that close when not in use. I could picture filleting a freshly caught mahi mahi in the sink and popping it right on the grill.

There was a convenient handhold as I walked forward and the wide-open foredeck had grippy molded nonskid. The headstay is on a crossbeam along with the anchor-roller. A windlass is located midforedeck in a recessed locker.

It’s a stretch to use the term “down below” on a multihull, but on the Seawind, you can’t really substitute the term interior either. Seawind is renowned for blending the interior and exterior, creating indoor-outdoor living spaces. It took it a step further with the 1260. The three-panel companionway door quickly folds and then is lifted up into a recess in the hard-top bimini and locked in place. This opens up the saloon and the aft deck, making one living space. 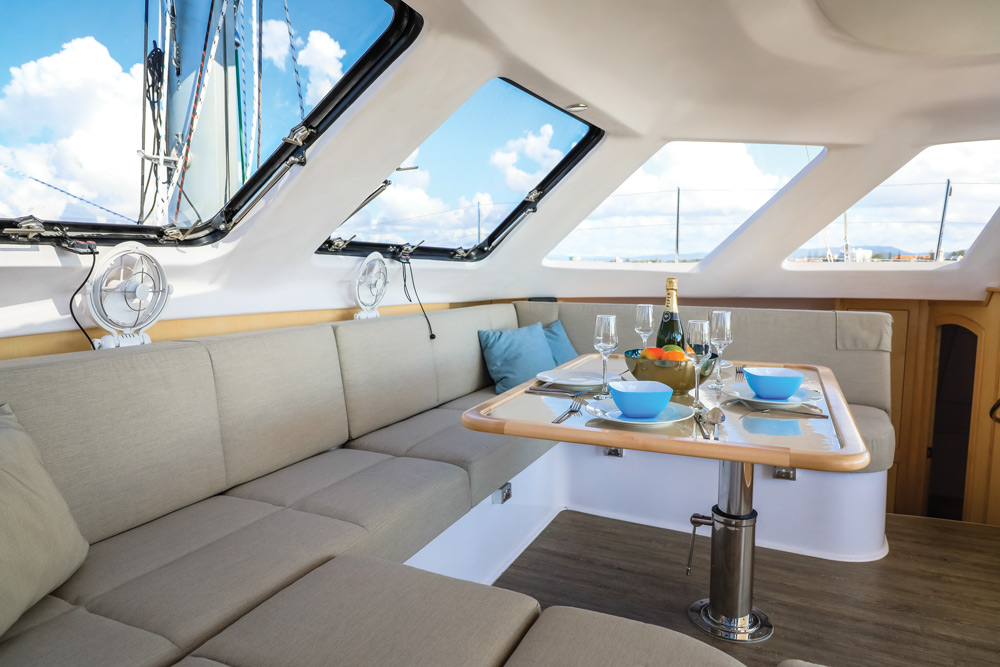 The modular interior allows the dining table and U-shaped settee to convert to a coffee table and lounge area with a daybed.

Modular furniture is a signature feature of the 1260. The U-shaped settee can be reconfigured into a daybed or set up as dining seating around a table that converts from cocktail to dining height. The nav desk is located on the port side of the settee, and is large enough to lay out a full size chart.

With a racing background, I am not a fan of heavy furniture and liners that make access to deck hardware difficult and where mildew festers. It was refreshing to see the modern aesthetic with clean lines and simple functionality in the 1260’s interior.

The light floods the saloon with the nearly 360 degrees of windows, and the ventilation is excellent with two large opening windows forward. The light and air is also evident in the hulls with large opening sidelights in the side hulls. The optional air-conditioning may only be needed in sweltering locations. The test boat was not outfitted with this option or the generator option as the large solar panels on the hard-top bimini provided 800 watts of solar power.

The galley is down in the starboard hull, although it is not closed off from the saloon. (A galley-up arrangement is an option.) The inline galley has refrigerator/freezer, storage and counter space inboard with the double sink and three-burner stove outboard. Everything was close at hand. Even though it was down in the hull, it felt bright and open with the large sidelights.

There is a four- and a three-cabin interior layout available. The test boat had three cabins with a port side owner’s cabin and larger head. Access to the engine room was through the head. One downside of the tapered bows is the tight headroom over the berths.

The 1260 smoothly left the Strictly Sail Miami docks, and felt sure under power at 8 knots with the twin 29-horsepower Yanmar saildrives. Grover said the 1260 moves so efficiently through the water, you can power with one engine. Getting under sail was a quick process and accomplished entirely from the cockpit with the electric winches. We hoisted the main and unfurled the self-tacking jib and set off across Biscayne Bay. The helm was fingertip control as we easily hit 8 knows in the puffy 15-knot wind. As we tacked, the boat lost almost no speed.

As we fell off the wind, we popped the nearly 300-square-foot screecher and set off, the speedo nudging 9 knots. (A 1,238-square-foot spinnaker is also an option.)

The tapered bows made a difference in pointing ability as we turned back upwind and were able to sail at 38 degrees apparent.

It was easy to keep an eye on the sails when at the helm through the windows in the hard-top bimini, which is also the location of the full-length traveler with end-boom sheeting.

I popped below to check Grover’s claim. As I walked forward into the owner’s cabin all I could hear was the swoosh of water rushing past the hull, not a creak to be heard. The 1260 felt effortless as it moved across the bay.

As the sun began to dip lower in the sky, we reluctantly headed back to the dock. The Seawind 1260 is the perfect boat for a couple or small family who loves to sail and wants to make the most of living in touch with nature.