Bringing your pets aboard may have its challenges, but a little planning can make for happy times cruising with your four-legged friends

The cruising life is often difficult enough, with confined space and endless maintenance. Throw an animal into the mix aboard a sailboat, and cruisers are presented with a whole raft of additional challenges. Litter trays and fur balls, seasickness, and vet bills; these are just some of the obstacles pet owners face. International cruisers also have to deal with customs clearances and immigration laws. But many cruisers have found the joy outweighs the hassle. 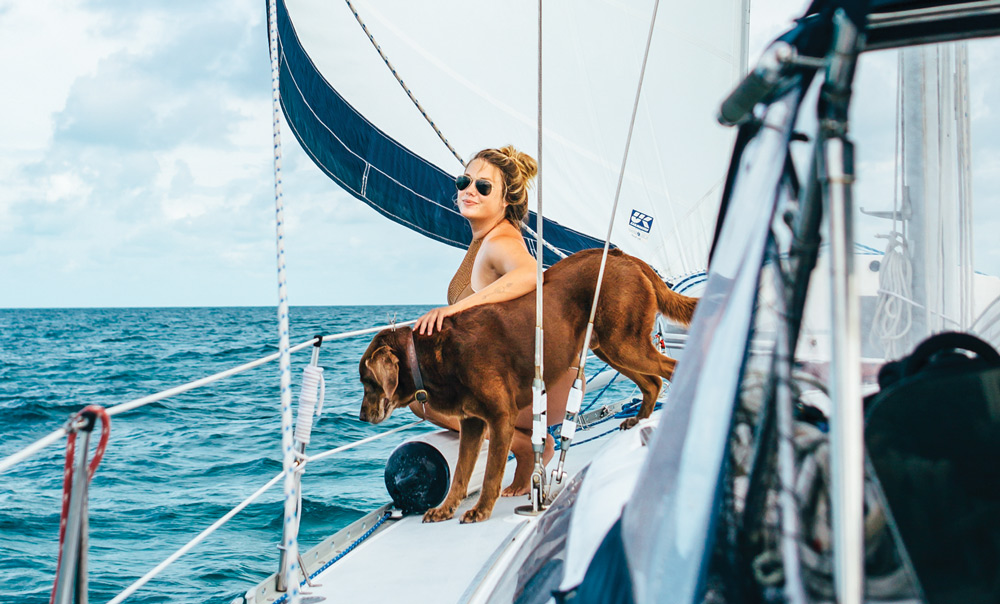 Brooke Conway had planned on leaving their chocolate Lab Bourré ashore with family when taking off for an extended cruise, but he settled in onboard and wouldn’t leave.
Brooke Bass photo

Pet owners feel a sense of loyalty toward their four-legged friends. After all, they are members of the family and for some, leaving them behind is not an option. Brooke Bass' dog Bourré, a large chocolate Labrador retriever, had been a member of the family for seven years before Brooke and her husband Barrett, moved aboard their 38-foot catamaran Solstice.

“We planned to leave Bourré with my mom in Louisiana for a couple of years, thinking it would be too much to have a dog on board while traveling from country to country,” Brooke said. “But when we moved on board, he followed us, quite literally, and wouldn’t get off the boat unless we got off first. He just seemed so content on the boat with us, he ended up coming along for the journey.”

Stephanie Colotti Ferrie also felt very strongly about bringing her two Labradors along for the adventure.

“Having dogs was a long-term commitment our family had chosen, and we’d had both Emmie and Summer since they were puppies. We couldn’t imagine leaving them behind,” she said.

Neither of her dogs had ever stepped foot on a boat until they moved aboard their 44-foot monohull Serendipity. Lucky for them, it was a smooth transition.

“Our dogs love being with us 24/7. At home, they would often be alone while we ran our four kids around. Now they get to spend so much more time with us, and they clearly love it,” she said.

It wasn’t such a smooth transition for Sharon Fisher and her cat Mollie aboard Spindrift. She too wanted to bring her pet along, but she had a hard time trying to help her kitty adapt to boat life. In the end, they had to stop cruising.

“We totally failed at getting our cat on board. She was so sick. She was always vomiting, unable to adjust to the movement of the boat—it was horrible. In the end, she was part of the reason we had to stop sailing,” Sharon said.

For others, their pets seem to find them. 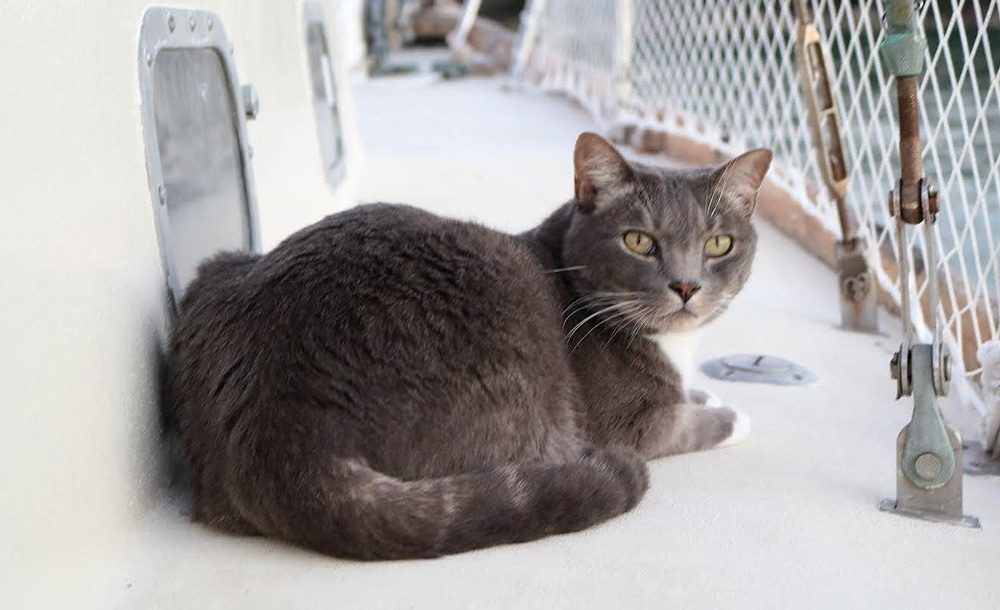 “A feral Tunisian cat rescued us,” said Nikki Fox Elenbaas. “When we pushed off in 2016 aboard Grateful, our rule was ‘no pets.’ We thought they would be too much hassle. Yet, when we found Bumpkin, she was injured and alone. Her brother had been killed, and her mother was nowhere to be found. We took her home with the firm plan of helping her recover from her injuries and gain some weight. That was 18 months ago.”

Pets that travel aboard boats have an increased risk of health issues compared to their suburban friends. Exposure to the elements, a greater number of risky activities and foreign animals, requires pet owners to be prepared when setting sail with a pet onboard. For the comfort and safety of your pet, it is essential you consult with a vet before you set sail. It’s also important to ensure you are capable of some basic medical care for your animal, should you be cruising in remote areas or your animal is injured while underway. While vets are accessible in many locations, it’s still important to bring along supplies to treat common injuries such as coral cuts on paws, skin and ear infections and dehydration. Pet first-aid kits are not unlike our own, and owners should bring antibiotics, antihistamine, anti-fungal and anti-inflammatories along with heartworm and flea treatments.

Seasickness is a genuine problem among pets, but while most of the pet owners I spoke to had some experience with their pet getting seasick, it wasn’t all doom and gloom.

Piper, a 4-year-old German short-haired pointer Lab mix, is the much-loved pooch of Dawn and Sam Weigel aboard Windbird, a Tyana 42. With only one bout of seasickness in the three years he’s been cruising, Dawn is more worried about Piper going overboard due to his enthusiasm.

“More often than not he wanders around the deck, when conditions allow, looking for dolphins and flying fish. I’m pretty sure Piper can hear dolphins long before we see them swimming at our bow,” Dawn said.

Having a larger high-energy dog onboard means that Dawn and Sam have to provide Piper with a means of exercise several times a day.

There are several options available in terms of seasickness and anti-anxiety medication, and it’s important to follow the dosage recommendations. Providing plenty of comfort and reassurance while underway is also necessary. Animals are often frightened when the boat is pitching and rolling.

Cats have been sailing aboard boats for centuries. Revered as a good luck charm, they were also used to rid ships of mice. It seems they don’t require the same level of exercise as man’s best friend, saving multiple trips to shore each day. Kach and Jonathan Howe of Two Monkeys Travel Group live aboard their monohull Empress with two cats, Captain Ahab and Zissou. 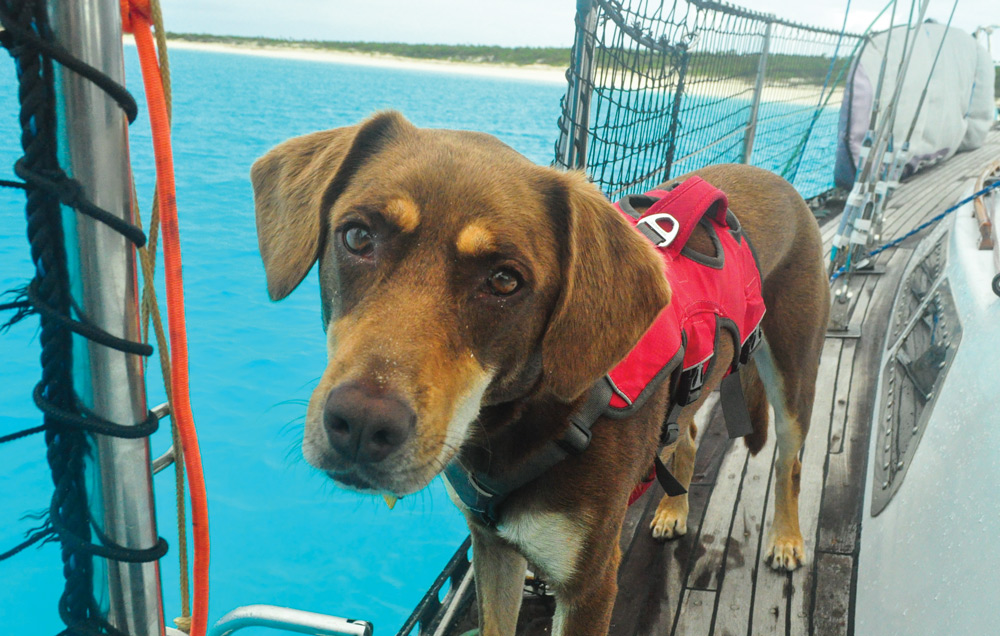 “Our sailboat is basically a 37-foot jungle gym for them, if the mast were a material they could get their claws into, they would have climbed to the top of it by now,” said Kach.

Then there is the issue of ensuring your pet doesn’t fall overboard and teaching them how to clamber back onto the boat if they do. Owners should also be mindful of stray animals when traveling ashore, as the incidence of mange and other transmittable diseases are common in third-world countries. Mange is caused by microscopic mites and is highly contagious for both animals and humans. Unfortunately, it is a disease that is easily transmitted and can be caught simply by being in the wrong place at the wrong time.

Pets are also susceptible to sunburn just like us, so ensure you protect them from the UV rays with hypo-allergenic sunblock. While zinc oxide is an effective sunscreen for humans, it is toxic for dogs. White dogs with short hair are more prone to sunburn, so it is recommended that owners apply sunscreen to sun-sensitive areas such as noses, lips, ears, groin and belly. Ensure that you purchase a sunscreen that is suitable for your pet prior to departure.

What is often most taxing on pet owners is the numerous trips to shore each day to allow pets to relieve themselves. While there are techniques owners can try in the hope to train their pets to relieve themselves on the boat, a large percentage of dogs do not feel comfortable doing so unless they absolutely have to, such as when they are on a long passage. However, all the dog owners I interviewed agreed that while being forced to take their pooches to shore was usually at inconvenient times, such as first thing in the morning and last thing in the evening, the pros outweighed the cons. They all mentioned meeting many interesting people, both fellow cruisers and locals alike, they made new friends and explored more of the area because of their regular trips ashore, and they too had an excuse to exercise. Despite only being 18 months old when he moved aboard, Piper steadfastly refused.

“Perhaps it was because he was kennel trained at home, he now considers the whole boat his kennel,” Dawn said. “When we’re anchored or moored near land, we will take him to shore two to three times a day. During long passages at sea, he will hold as long as possible, but will finally pee after 24 hours at sea and do his business after 40 hours, after that he’ll do both once a day, usually at night.” 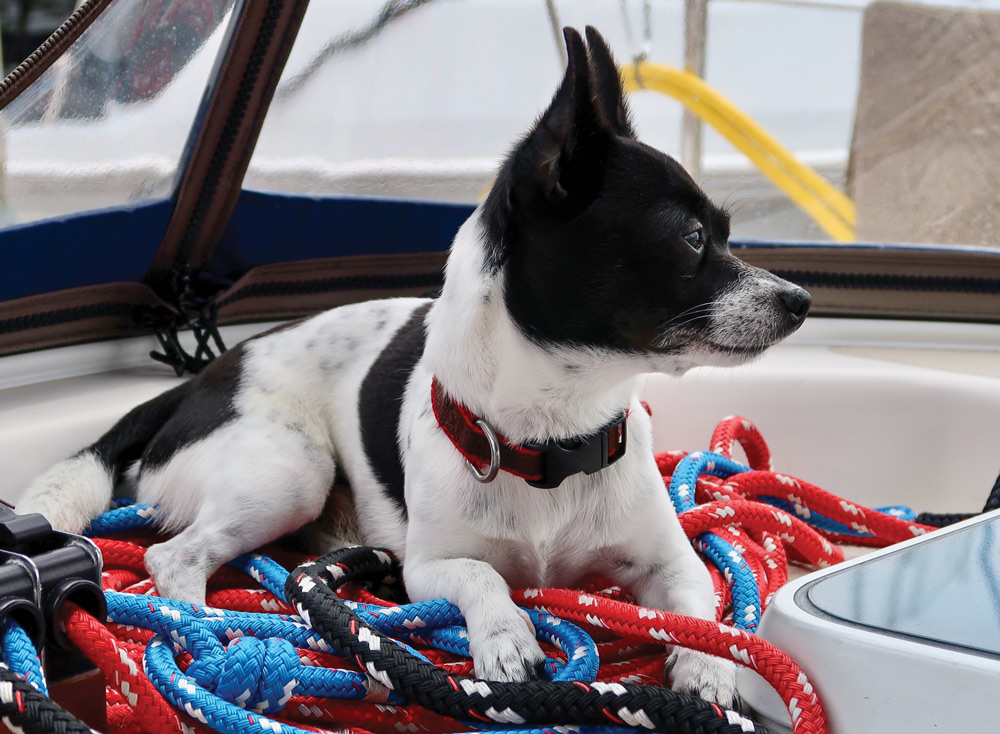 Arthur rests in the shade of the dodger.
Erin Carey photo

Kelly Porter and Nick Johnson’s pup Arthur, or King Arthur as he is fondly known, lives aboard Satori, their 44-foot Morgan, and is less than five pounds soaking wet. Arthur is so small, he travels with his doting parents in a backpack. However, it’s not so much the size of the animal but their level of stubbornness.

“We’ve tried to train Arthur with a pee pad, said Kelly, but he is so stubborn and will not go consistently. We even tried with real grass, but he just used it as a bed. Now we take him to shore at least twice a day, and that’s not always fun, especially after a big night of sundowners or a long day of boat maintenance.”

So, while dogs present issues as far as toileting goes, cat owners seem to find this side of things much easier to accommodate. While Captain Ahab had been a member of Kach and Jonathan’s family before moving aboard, Zissou was found struggling to survive in a drainpipe in the Dominican Republic, when he was just a few weeks old. Kach had a soft spot for ginger cats, and the little kitten bared a striking resemblance to Capt. Ahab, who they already had onboard. After a brief adjustment period, the two cats bonded, and the pair are now inseparable. As far as toileting goes, Kach seemed to find this aspect much easier than those with dogs.

“We have a litter tray on board which both cats are happy to share, and sourcing litter for their tray has been easy. I only ran out once and had to resort to sand from the beach. Luckily there’s always plenty of that around,” Kach said.

Finding a secure area for the litter tray is essential for both cats and humans. Boats can often move around quite violently while underway and an unsecured tray is not pleasant for anyone. Owners should consider an enclosed box, and it should be firmly strapped into place before each passage.