Starting in January 2018, the pair worked on Mariah, with Thurston revisiting an old friend and Jared discovering a new love. Two or three nights a week, Jared would leave work, pick up a six-pack of Heineken, and meet Thurston under Mariah’s cover, where they’d run lights and heat and work until they got too cold or ran out of tasks. Because of the temperature, most epoxy work or painting was out of the question. They’d also work Saturday mornings and the occasional Sunday.

The first job on the work list was general cleaning. The boat had been sitting in the yard for years and when the cover blew off, the boat filled up with water, which froze and thawed over the years, Thurston said. Sometimes things look worse before they get better, as the evidence of a months-long renovation collects in the saloon.

“The boat essentially sunk on land,” he said. “To compound this problem, for some reason the previous owner changed the oil and emptied it into the bilge. When oil gets into fiberglass it’s almost impossible to get it out.”

It was fortuitous that Thurston had painted the bilge when he owned the boat the first time, which helped minimize the oil damage, but the smell, and sneaky pockets of dried oil, persist.

They replaced the cabin sole, but much of the structural work Thurston had done years before was still in good shape. The same could not be said for the deck, which had significant areas that needed to be cut out and replaced, including a large area around the mast. Once again, all the hardware was removed from the deck. Some hardware was replaced, other pieces were rechromed or repaired, and the deck and cabinhouse were repainted before all the hardware was rebedded.

They also removed outdated equipment, like a staysail track on the foredeck, and as much of an odd steel plate around the mast that had punctured the top skin of the deck.

“It was complete overkill,” Jared said. “We cut that out and then all the deck around it and recored it all.”

The project was daunting, particularly at the beginning, Jared said. They set small goals at first.

“Steve would say we’ll call it quits if we can’t get this one thing done,” he said. “Then we’d get that done and move on but there was always a Plan B if something didn’t work.”

They stopped adding up their man hours when it became clear the answer would be depressing, they said. But they did realize one thing: they made a good team.

“There’s no other person I would have done this project with other than Steve,” Jared said. “He has so much knowledge on the industry and on this particular boat.” The cabin sole was replaced with new teak and holly.

One of the deciding factors in agreeing to take on the project was that Thurston had replaced the engine when he owned the boat the first time, so the pair had a reasonable expectation that it would be in good shape. But it turned out it wasn’t as easy as they anticipated.

“At one point we decided that if we didn’t get the engine started by a certain date, we’d stop the project,” Jared said. “It was the one thing not progressing.”

In fact, the boat ended up being launched—accidentally—without a functioning engine. Due to a miscommunication at the boatyard, Mariah ended up being launched before Thurston and Jared were ready. They towed it around the peninsula to a mooring, and continued to work on the engine. Finally a local diesel mechanic, who had made it his personal mission to get the old Westerbeke running, got it started. It wasn’t easy, but it was better than replacing the engine.

“It took us months to get it started, but I’m so glad I made that change back then,” Thurston said.

Getting the engine going meant the boat could make its debut on the bay in the last race of the season in September 2018, if only barely. The race was a bust: it was cancelled due to lack of wind, but it was a moral victory.

“It was borderline tearful,” Thurston said. “We were really proud of the effort. All of Narragansett Bay knew we were involved in this restoration, and everyone knows the boat. We were among 100 boats out there and so many people came by to say congratulations and check out the boat. It was heartwarming.”

Although the majority of the main punch list was taken care of before the launch, work continued after the 2018 season, and the boat saw its first full season on the water in years last summer. The Kellys, with their three daughters, ages 11, 9 and 6, did some sailing and spent the first of what they hope will be many nights onboard.

“The boat sails wonderfully,” Jared said. “It’s a classic design and really well balanced. It’s so easily sailed. We’re able to unfurl the headsail and not even put the main up, and just reach around the bay.”

More work is planned for the future including replacing winches and making sense out of the collection of electronics on the boat that span decades, Jared said.

The Kellys are now the fifth owners of Mariah—the name has remained since it was christened by Cox—and the plan is to do what many of her previous owners have done: cruise a lot, race a little and raise their family onboard. The boat is perfect for all of it, said Katie.

“It’s amazing now,” she said. “It has awesome sails and the interior that a Pearson 36 hull No. 1 should have.” 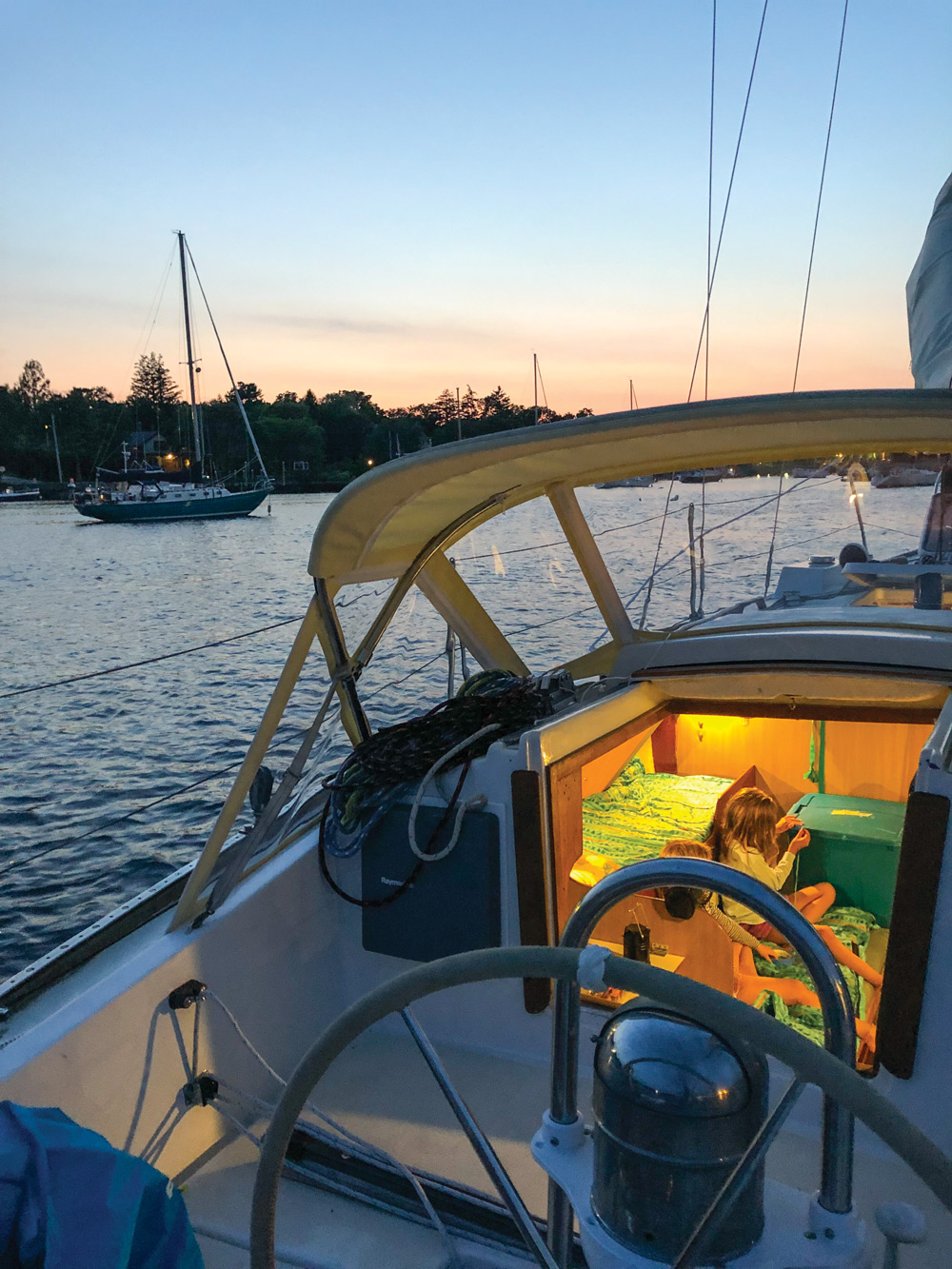 The Kellys have great cruising plans in mind for their three girls, who got a taste of life on board over summer when they spent their first night on the boat.

Jared said it seems like every sailor near Barrington has a Mariah story. The owner of the boatyard couldn’t help but share how thrilled he was to see the boat in great shape again. It turns out he sailed on Mariah on the very first Tuesday night race that launched the Barrington Y.C.’s Tuesday series back when Cox owned the boat.

Another sailor stopped by when Jared was working on the boat to say it was the first boat he’d ever raced on. “You could almost see him go back in time reminiscing about his time on the boat,” he said. “It connects a lot of people.”

“I think about how I can now give back as my predecessors did,” he said.

Cox’s legacy will forever be tied to Mariah, but there’s a more tangible reminder of her original owner that has stayed with the boat.

When the boat ended up back in Thurston’s hands a second time, Cox’s glass case was still mounted to the wall, his eyeglasses still inside. 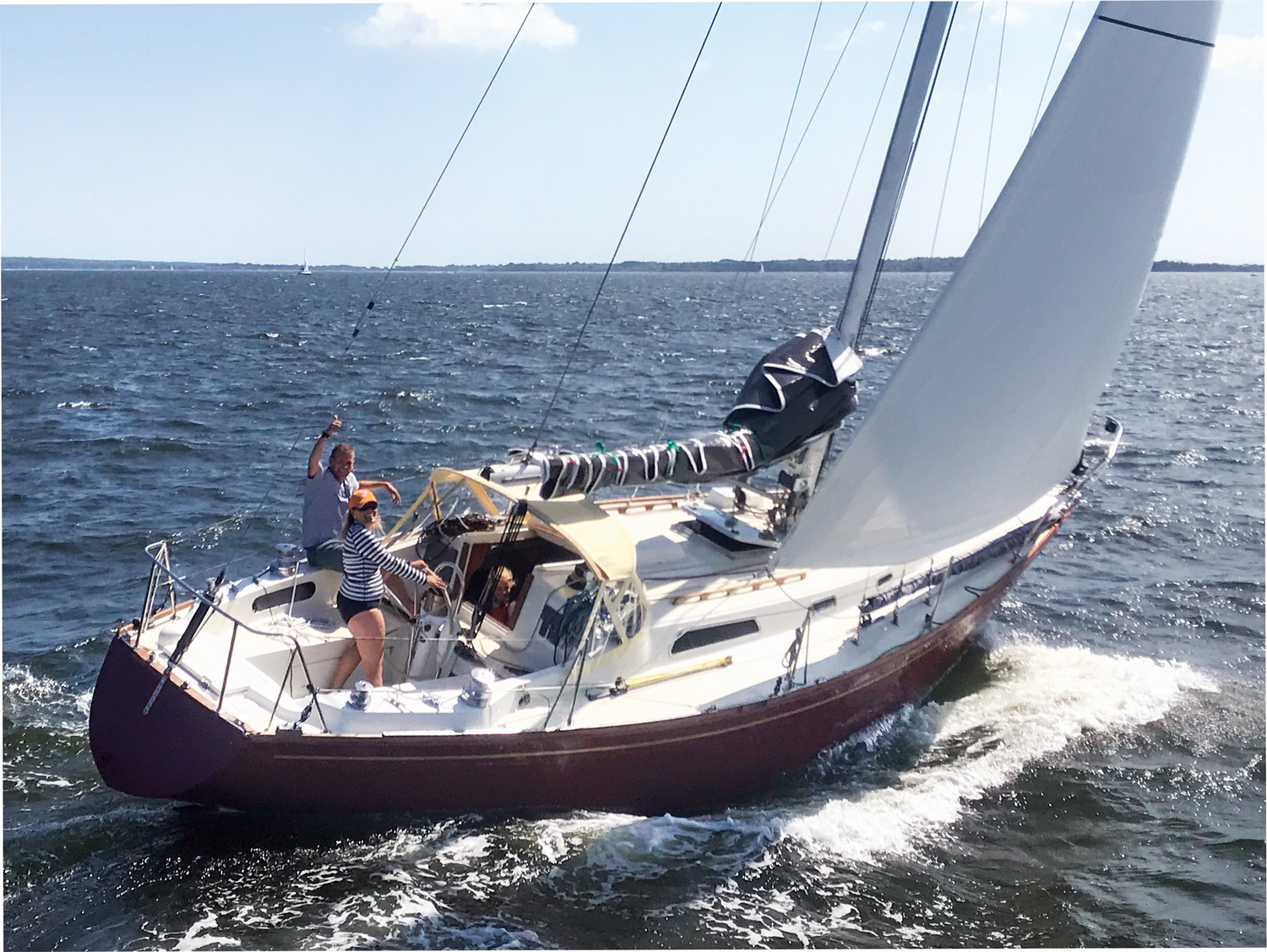