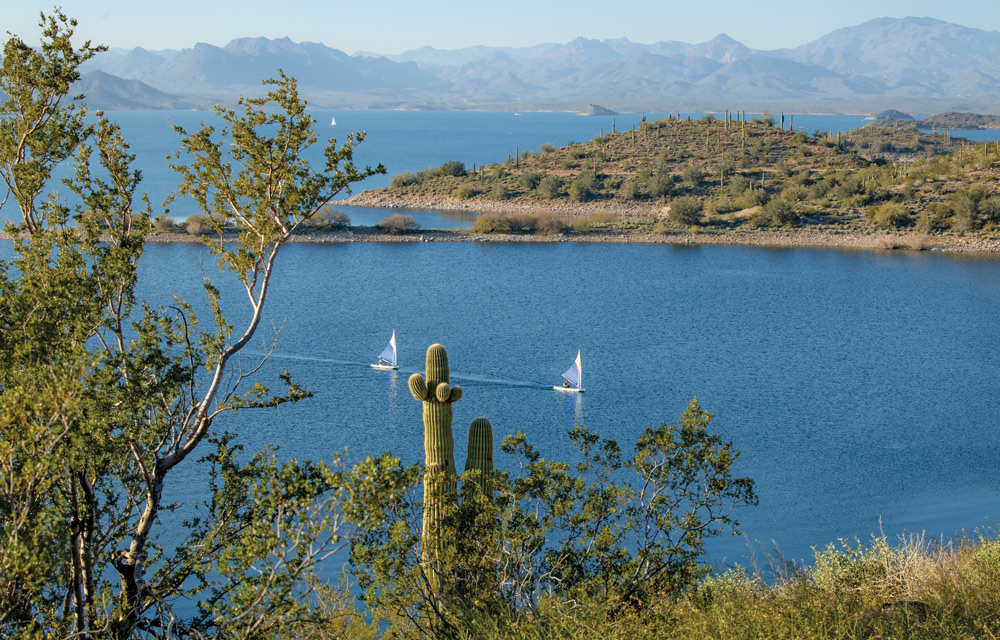 When Bob Naylor visited a yacht club on the East Coast and presented his yacht club card that features a cactus on its burgee he was met with a quizzical look. “Is this real?” the bartender asked. “Where can you sail in the desert?”

In fact, Naylor not only sails near his home in Phoenix, Arizona, he is also a member of the Arizona Yacht Club, founded 62 years ago and now boasts more than 250 enthusiastic sailing family members.

“Most people think we are fly-over country that’s only sand and cactus, but we are a avid bunch of sand sailors,” Naylor, the club’s rear commodore, said.

The Birthday Regatta and Leukemia Cup in February is one of the club’s major regattas, and this year it drew more than 80 sailors to Lake Pleasant, 30 miles northwest of Phoenix. One-design classes for Merit 25s, Buccaneer 18s, Santana 20s, Sunfishes and Lasers raced along with PHRF classes for sportboats and cruisers.

“We had sailors from all over the West and New Mexico, and we even had a guy trailer his Sunfish from Wisconsin to camp and sail,” said regatta chairman Naylor. 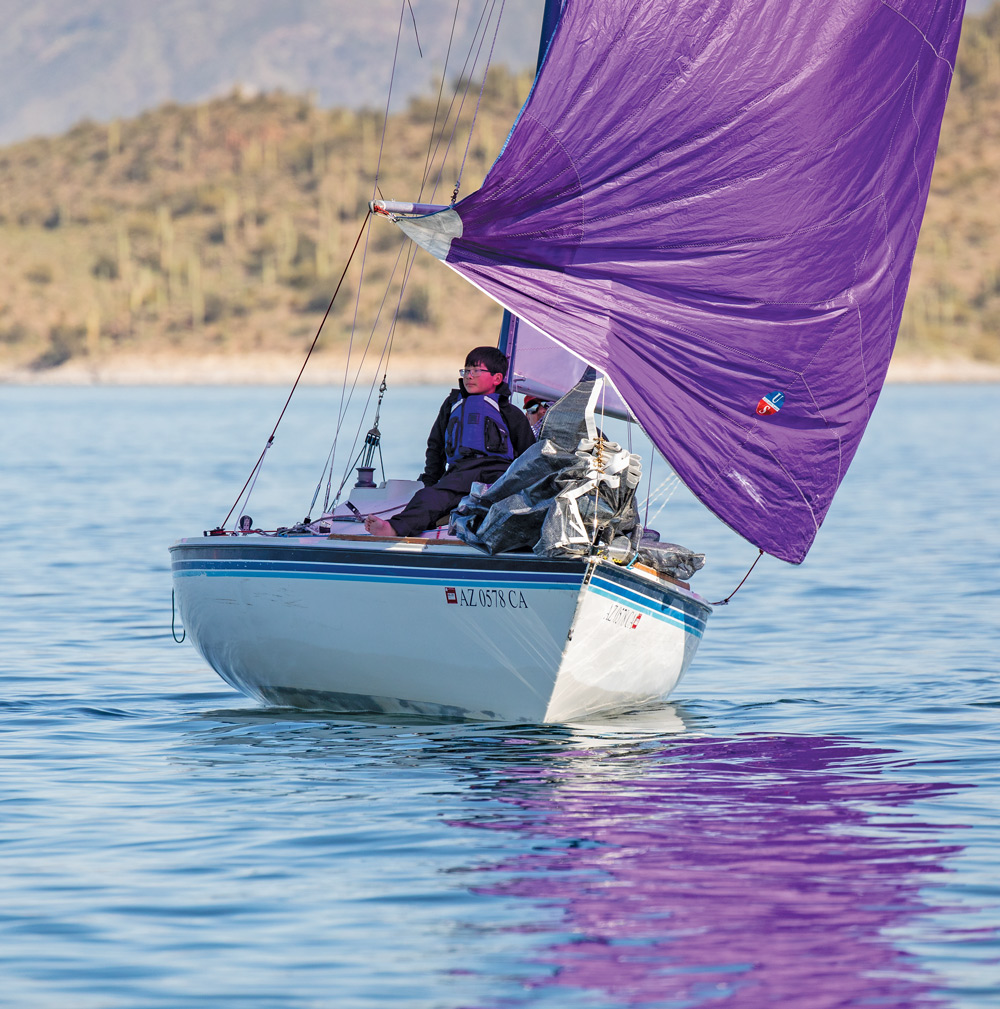 Lake Pleasant, the club’s primary sailing venue, is a 10,000-acre reservoir created by the Carl Pleasant Dam and fed by the Colorado and Agua Fria rivers. Winter temperatures are moderate, with 60s and 70s during the day, dropping to the 50s at night. The cool waters of the 200-foot-deep lake on the valley floor of the Sonoran Desert make for interesting sailing conditions.

“We are affected by a diurnal wind pattern where the cool mountain air comes down from the Bradshaw Mountains in the morning from the north, but switches over to the south in the afternoon with the heating of day,” Naylor said. “We usually get a steady 6 to 10 knots.

The wind for the Birthday Regatta at the end of the season struggled to reach 10 knots, but that didn’t dampen the fun. Many of the sailors trailered their boats and camped at Pleasant Harbor Marina. The marina is one of two on Lake Pleasant and is where many yacht club members keep their boats during the season, either in a slip or dry sailed out of the marina’s mast-up boat storage. It’s also where the club stores its race committee pontoon boat.

The Arizona Y.C. is unique in that it operates without a physical club, holding its monthly meetings at a Dave and Busters restaurant in Phoenix.

“Most of the land around the lake is owned by the government's Bureau of Land Management,” Naylor said. “But we are saving up to hopefully have our own place.” 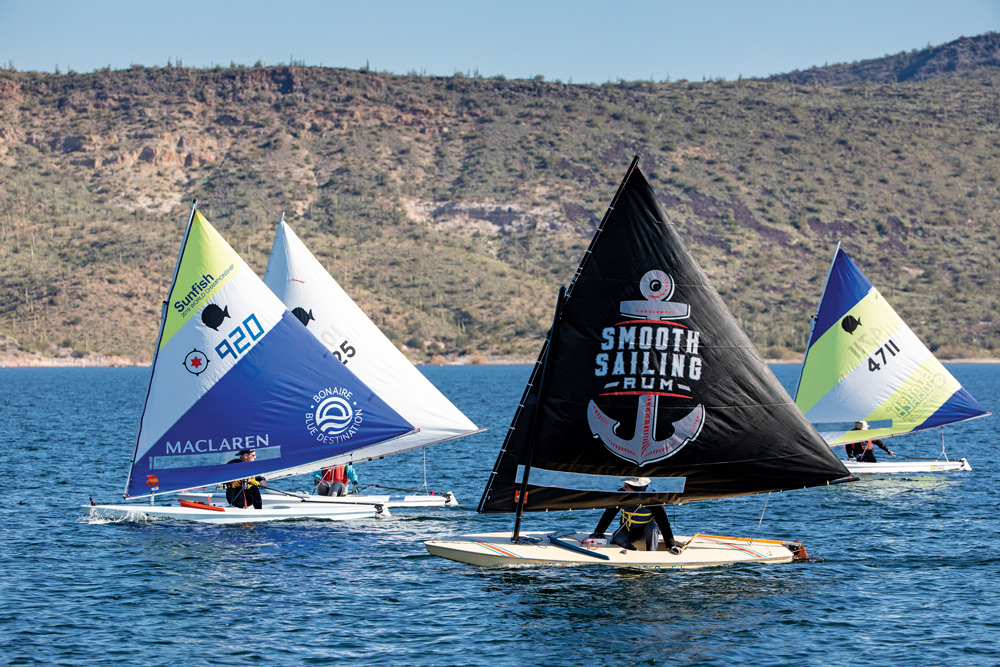 The meetings drew an average of 100 people before the coronavirus pandemic moved all meetings onto a virtual platform. Held in a conference room, the monthly meetings bring in speakers, with recent speakers such as Haley King, co-skipper of the Race to Alaska winner Team Sail Like a Girl, and Jerome Rand, who sailed his Westsail 32 on a nonstop circumnavigation.

The club isn’t all about serious racing, with many members participating in raft ups and fun regattas such as the Tall Cactus Regatta that sails around the islands on Lake Pleasant.

The club was founded in 1958 by Ruth Beals, the first sailboat dealer in the area, who sold W.D. Schock boats from a vacant lot in Phoenix.

“Ruth was a real character,” Naylor said. “She read a story in ‘Life’ magazine about sailing and went in all the way, selling hundreds of Lido 14s. She singlehandly got hundreds of people into sailing.”

The club had 17 charter members, but the numbers quickly grew to 125 thanks to the $1 membership fee. With few boats, the early years were spent taking newcomers sailing to grow the club, a tradition that continues to this day. The club maintains active educational programs, including monthly speakers and junior and adult learn-to-sail classes. The club founded the nonprofit Arizona Sailing Foundation that provides community sailing lessons. 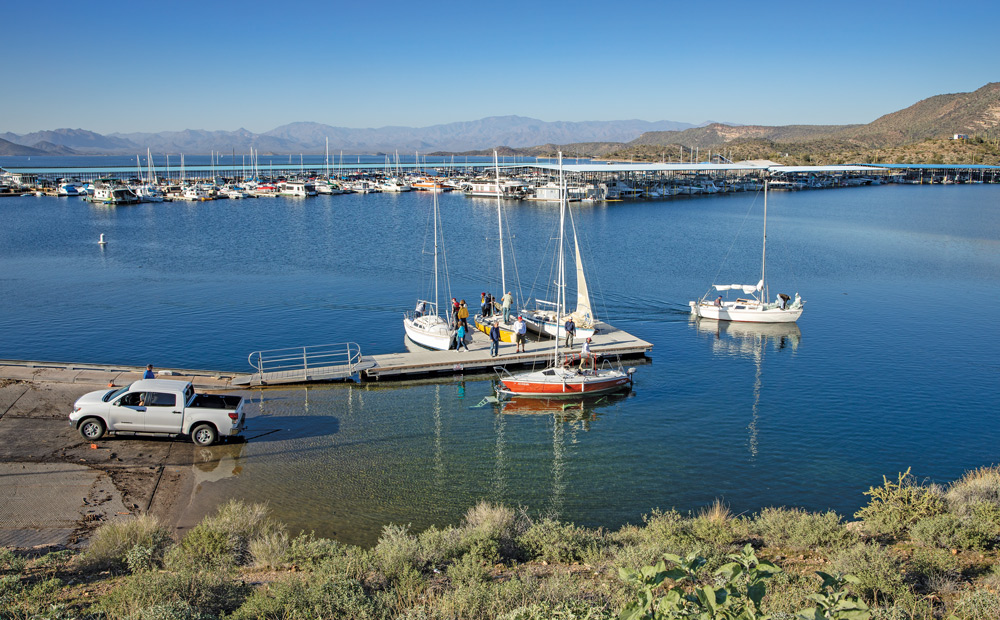 In the summer months many club members trail their boats to San Diego, a six-hour drive away to get away from the heat. Last summer, many cruising members held a flotilla to Catalina Island.

The club also sails on Tempe Town Lake, a small manmade lake in the city that Naylor describes as having an “urban vibe.” The club offers community learn-to-sail programs and runs a Wednesday night beer can series in the summer months.

“Our sailing season is opposite of the rest of the country, where we do most of our sailing in the cooler winter months,” Naylor said. “Instead of frostbiting we have our heatstroke series.”

The next time someone walks into a club with a card emblazoned with a cactus burgee, you’ll know there really is sailing in the desert.