In the most extreme Cup ever sailed, a promising American challenge flops as a small fleet pushes the limits of technology

It was a scene that looked more like a futuristic movie than one from a sailing racecourse. Patriot, the New York Yacht Club’s AC75 challenging for the America’s Cup, bucked out of Auckland’s Hauraki Gulf, popping a wheelie with the bow more than 20 feet in the air. Crashing down, it rolled onto its side as the sailing world held its collective breath.

Helmsman Dean Barker’s words delivered in a normal voice to his teammates right before the crash sounded oddly calm given the impending doom. “I’ve lost the rudder.” American Magic’s capsize in the second round robin of the Prada Cup was gravity-defying and catastrophic. After the boat popped a wheelie, it crashed on its side.
Luca Butto photo

But what American Magic lost was far more. Although the team would make a herculean effort to repair the damage and hope remained that they could pull off the kind of comeback story the Cup loves, it turned out that what the team had lost was the chance to face Emirates Team New Zealand in the America’s Cup.

The capsize became the defining moment in a promising challenge. Back in the America’s Cup game for the first time in nearly 20 years, the New York Yacht Club put together a well-funded program, bringing together sailing elites both behind the scenes and on board, even wooing veteran America’s Cup helmsman Barker to join the team. The team was the first of the challengers to arrive in New Zealand and quickly took to the water to make up for the lost time experienced by all the teams when two of the so-called World Series events in the lead-up to the Cup were canceled due to the Covid-19 pandemic.

Without those events, the first time American Magic’s Patriot would line up against the paltry group of challengers—just two other teams, Italy’s Luna Rossa Prada Pirelli and England’s Ineos Team UK came to fruition—was at a mid-December regatta in New Zealand that included Cup defender Team New Zealand. 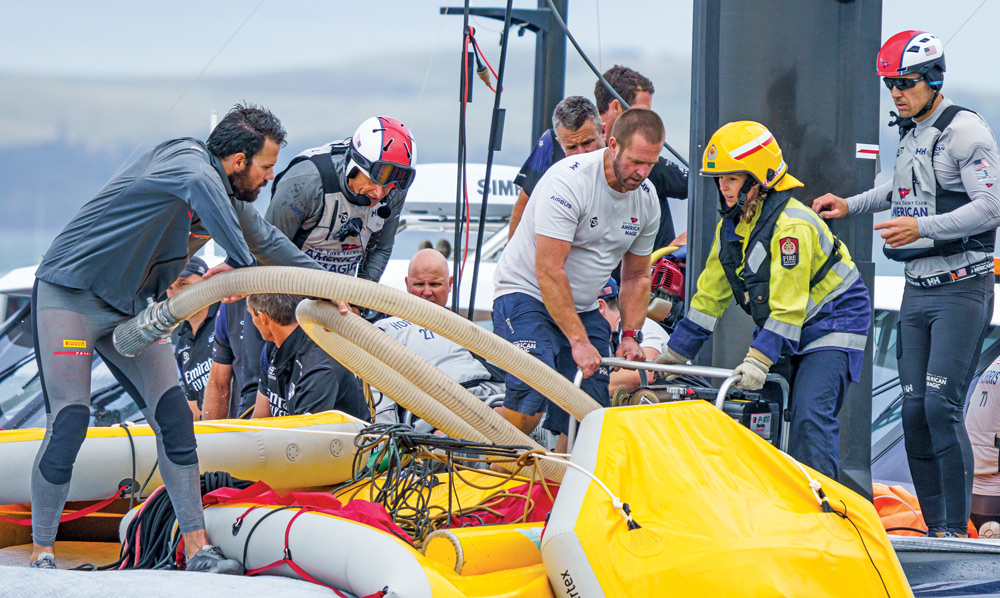 When it was righted, teams, firefighters and even helmsman Dean Barker aided the effort to keep the boat from sinking.
From the first race, American Magic stood out, looking fast and tactically superior to the other challengers facing off in radical foiling monohulls that sail above the water, not through it, and achieve speeds over 40 knots even in light to moderate breezes. The Americans even handed Team New Zealand its only loss of the series. The Brits, meanwhile, were in bad shape, losing all six of their races in the event and looking like they were so far behind the rest of the teams that there might be no shot at redemption. Luna Rossa, helmed by notoriously aggressive Aussie Jimmy Spithill who sailed for the American BMW Oracle Racing team in the last two Cups and Francesco Bruni, showed moments of promise but clearly had yet to work out its unusual double-helmsman setup.

American Magic finished the December regatta looking not just like the challenger to beat, but also a team that could stand a real chance of upsetting the Kiwi’s defense.

During the break between the December event and the start of the Prada Cup, the new name for the challenger series to determine who will face Team New Zealand in the America’s Cup, every team made improvements to both the boat and their crew work. As is common in classes in which the boats are still developing, the learning curve is steep and small changes can make huge performance gains.

When the three challengers hit the water in January, it was clear that some teams were climbing the learning curve faster than others. Ineos Team UK, led by skipper Ben Ainslie, was unrecognizable as it went on to flip the scoreboard from the December regatta and go undefeated during the round robins.

Even former America’s Cup skipper and press conference moderator Bruno Troublé asked Ainslie after the first day of racing if he was sure he was sailing the same boat.

“It’s definitely the same boat, it’s just had quite a few modifications,” Ainslie said. “The boat is obviously going a lot better.”