In the most extreme Cup ever sailed, a promising American challenge flops as a small fleet pushes the limits of technology

Luna Rossa, too, seemed to have found new gear, although the team’s crew work and communication seemed off at times. The Italians were the only team to go with two helmsmen—Spithill driving on starboard tack and Bruni on port. It was an innovative solution to a problem all the teams faced on the new boats that rip through the water when they are balanced on winglike foils and wallow like lazy whales when they can’t build enough lift to get up out of the water. With aerodynamics more important than hydrodynamics, the boats are sleek, with sailplans that minimize windage but also severely limit visibility. Double-skin mainsails skim the deck so there is no visibility from the leeward side of the boat and a small sliver to windward. Tacks and jibes require helmsmen on both sides of the boat to complete the maneuver. American Magic, gliding just over the water, takes aim at Luna Rossa as its crew looks for a passing opportunity during the Prada Cup.
Luca Butto photo

All the teams other than Luna Rossa send a crewman, often the main trimmer to the other side of the boat prior to the maneuver to take the wheel and then after it’s completed the helmsman clambers behind the mainsail and slips past the guy holding the wheel, all while building speed upwards of 40 knots. It’s a process that not only seems fraught with peril, but also means that the helmsman loses site of the course for a good amount of time, a situation that is particularly problematic at speeds that eat up the racecourse in the blink of an eye.

With two helmsmen, Luna Rossa always has a dedicated helmsman on the wheel, although this method, too, has its downfalls. At times the momentary delay in a call from one helmsman to another seemed to foul the team’s timing, with foils dropping and raising just a bit off the pace, creating slow tacks and jibes. In the semifinals it seemed the team was prepared with a much different and more decisive communication strategy that eliminated these issues and made the two-helmsman approach look superior.

In the final race of the second round robin, American Magic had yet to win a race in the round and desperately needed a win, not just to get points on the board but build some confidence in the team that seemed to have gone from hero to zero in a matter of weeks. Leading Luna Rossa into the final mark it looked like the Americans  would finally be able to put a win on the scoreboard. It had been a moderate to heavy-air day with puffs along the course and the Americans favored the mark to port where they saw more consistent wind down the course. Flying along at 45 knots, they tacked around the mark and were bearing away to head down the course just as a 24-knot puff hit. The boat started heeling and the sails eased, but with a leeward running backstay preventing the mainsail from dumping much wind, the die was cast. As though possessed by a bucking bronco, Patriot caught air, its bow high in the air, and came down hard on its port side.

Crew in the leeward cockpit found themselves stuck under the mainsail, with Hutchinson having to be cut out by another crewmember, but all were quickly accounted for.

At first the disappointment for the team was centered around losing a race they had in hand. Just a couple weeks before Team New Zealand had capsized during practice and seemed no worse for the wear after the boat was righted, so it was assumed the same would be true for Patriot. 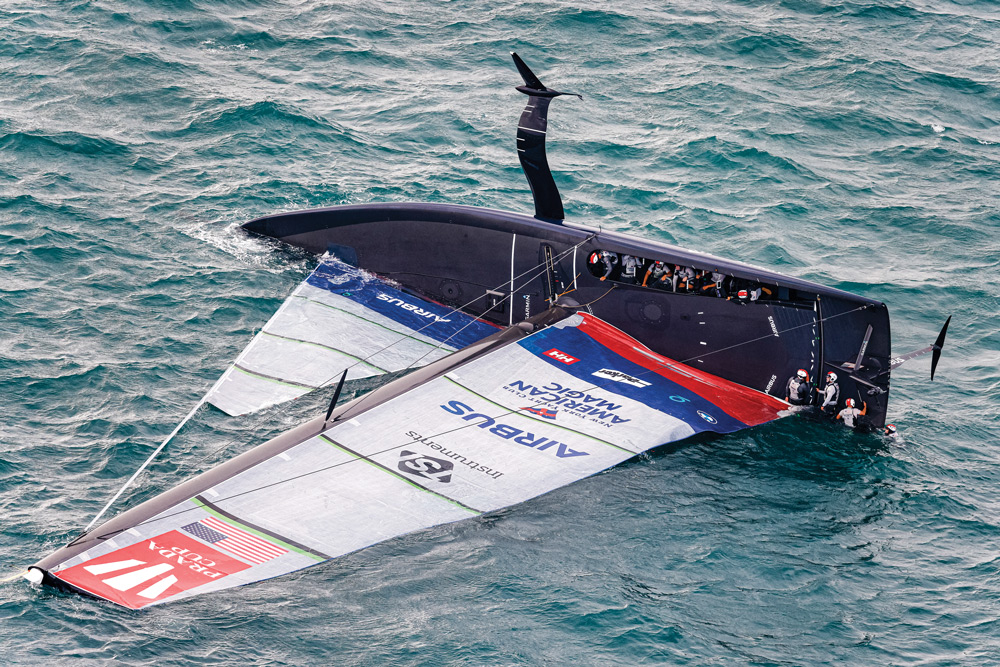 But as the boat was righted and a chase boat picked up a chunk of carbon fiber 3 feet in diameter, it became clear that catastrophic damage had occurred. Crewmembers standing on deck had several inches of water over their shoes. Buoys, airbags and pumps were quickly brought over to help, but seemed little match against the giant hole in Patriot’s side. At one point an inflatable buoy was lifted to the top of Patriot’s mast to be used as a marker to find the boat should it sink in the 12-meter deep water.

Auckland firefighters as well as all the other teams rushed to assist in what had become a rescue mission. Eventually a massive, flat inflatable raft wrapped under the hull and around the hole seemed to provide hope, as 16 pumps removed water from the boat. Hours later,  after a slow, 10-mile tow to the team’s base, the boat was lifted out of the water around midnight and the full damage was visible. Seeing carbon fiber hanging like ribbons from the gaping wound was dramatic, but even more profound damage had been done to the boat’s sensitive and crucial electrical systems.

“The easiest part is rebuilding it, the hardest part is getting the electronics up to speed,” Hutchinson said the day after the capsize. “The boats are finicky if you have concerns or worries it’s dealing with the gremlins in the boat.”

Over the next nine days the American Magic team would work around the clock to repair Patriot, pilfering pieces from their first boat Defiant, and getting help from the other America’s Cup teams and the boatbuilding community. They were fueled by pizzas sent to the shed and coffee from a nearby shop, where customers donated more than $1,500 to caffeinate the American team. 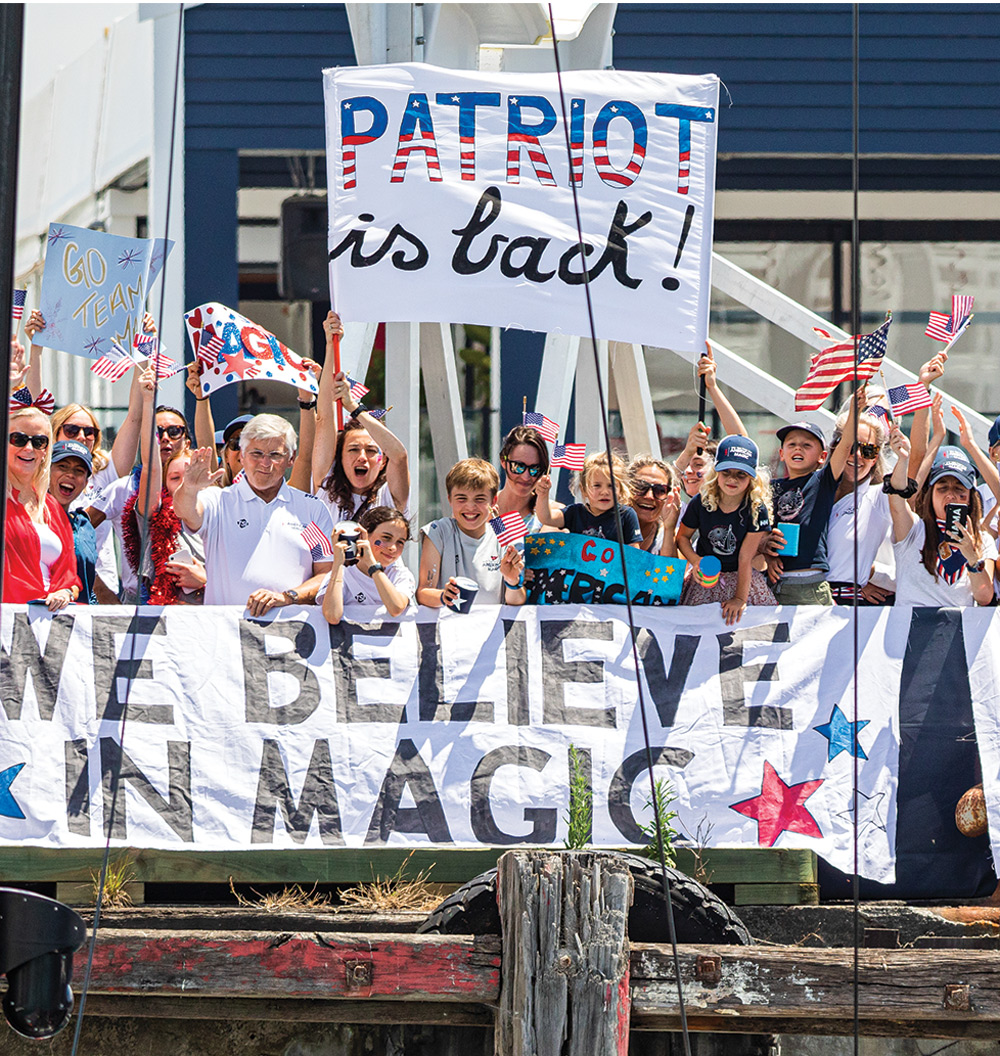 A crowd of supporters were on hand to cheer the team on as it left the dock to return to racing.

When the boat emerged from the shed having missed the remainder of the round robins, it sported a vinyl bandage-shaped message thanking the other teams. But while Patriot was being frankensteined back together, the British team was putting an exclamation point on their domination of the round robins, getting an express pass to the Prada Cup finals. Luna Rossa would face the Americans in a best-of-seven semifinal.

Once again, American Magic was bested by a team that was getting better faster than they were. The Italian team seemed to have solved its communication issues during the break before the semi-final and cranked out two nearly perfectly sailed races the first day.

A bruised American Magic team seemed to not know what hit them, perhaps still gun-shy just back on the water on a breezy day described by Luna Rossa’s Bruni as “the most difficult conditions” they’d sailed in. But more than that, it was clear the boat was not 100%. Patriot couldn’t point with Luna Rossa, and although there were bursts of speed, the Italian boat bested them there too. Onboard communication on Patriot hinted at the crew’s frustration.

On the second day of racing the team showed signs of getting their feet under them, but then disaster struck again. In the second race of the day, it was win or die for the Americans and a problem with the battery-operated cant system left the boat wallowing in the water, a victory out of reach and the team struggling to just finish the race in a final testament to its determination.

“We were up against a team that had make a big step up from when we sailed against them two weeks ago,” Barker said. “In this game in these development boat a week is an eternity and you can see how quickly things can be turned around.”

With the Americans first out of the Cup, the Cinderella comeback story was not meant to be. The Prada Cup finals were to feature a British team that had seen its comeback in the early rounds and Luna Rossa, a team that’s been chasing the Cup for two decades and now fueled by Spithill’s renewed never-say-die mentality. As they sailed across the finish line in the semifinals, the team allowed itself one moment of celebration before Spithill said, “On to Ineos.”

The America’s Cup challenger series has always been as much about selecting the best challenger to face the team defending the Cup as is it about preparing a challenger for the task ahead, but until challenger faces defender on the starting line of the first Cup race March 6, no one really knows which team has made the decisions that will allow its crew to loft the Auld Mug in the air.

As the Americans licked their wounds, there was no word from New York YC if they would challenge again in the next Cup, but for his part, skipper Hutchinson was eager to continue.

“The America’s Cup is a harsh game but it’s a game worth fighting for,” he said. “If you never set the bar out that far in front of you how are you going to know what you can achieve.”