A chartering pro visits the British Virgin Islands to get a firsthand look at how to navigate pandemic protocols. And it turns out it’s pretty easy. 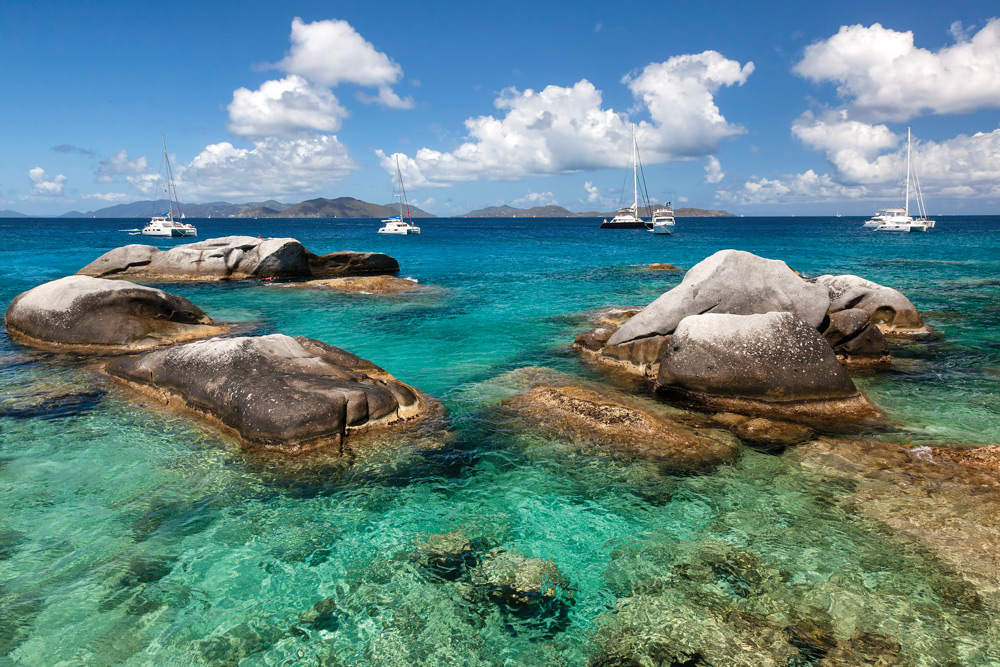 The rugged beauty of The Baths is a popular BVI spot.

When chartering is your job, sometimes you have to take one for the team. Such is the life of Josie Tucci, who is the vice president of sales and marketing for The Moorings and Sunsail charter companies. With uncertainty about Covid restrictions in one of the most popular charter destinations in the world—the British Virgin Islands—Tucci headed there herself in February for a firsthand look at how it all works. This BVI adventure included stops at idyllic and largely empty anchorages.
She was rewarded not just with the primo sailing conditions, warm water and sunny skies we expect from the BVI, but also an experience much different from her previous trips—which she says number more than 20. Instead of a race for a spot in a favorite anchorage, Tucci and her crewmates found themselves with the luxury of picking the perfect spot nearly whenever they wanted.

At press-time the BVI requires a negative PCR Covid test result to enter the country, and additional tests upon entering the country and four days in to a stay. And while that sounds complicated, BVI Tourism has created an online travel authorization gateway that organizes and arranges for all of these extra steps. There is a $175 fee.

Tucci said the entire Covid process took just minutes at the Tortola airport. They received a test in a designated area, went through customs and immigration and received tracking devices in waterproof bags that they were told to keep charged.

After arriving at the Moorings base, they quickly registered and went to their Moorings 4500 catamaran on the base’s quarantine dock. The boat had been provisioned and they ordered carryouts delivered from the yacht club.

Briefings are done in a masked, socially distant fashion and after that the crew was free to go. Quarantine, it seems, is a lot better on a boat.

Until the crew passed their Day 4 Covid tests, they could sail around the beautiful BVI all they wanted and stop in 16 off-the-beaten track quarantine anchorages, where they could swim, paddleboard and even walk a bit on the beach before enjoying sundowners in the cockpit. 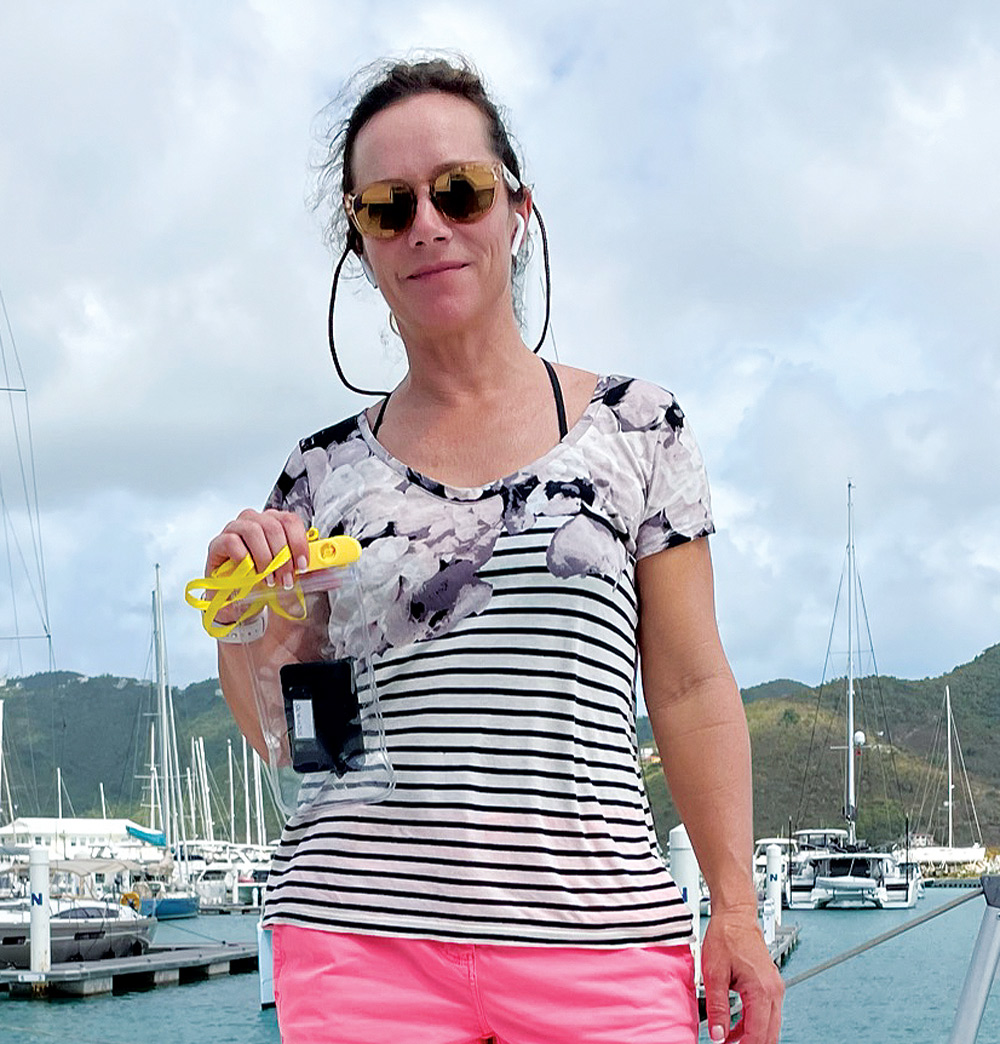 Josie showed off her Covid tracking device given as she entered the country, which she had to hang on to until she received her negative Day 4 Covid test.

“There’s really no one about, and that’s the point,” Tucci said. “Actually it was great. I didn’t really even notice that I wasn’t getting off the boat.”

Stops at Norman Island’s Benures Bay, Leverick Bay and Virgin Gorda’s Valley Trunk Bay, just down the beach from The Baths, filled the next quarantine days, with long sails just for the joy of sailing, good times with friends, and the exquisite paradise of the BVI, sans the crowds.

“If you’re into the sailing, and it really is about the sailing, you’ve got that to look forward to,” Tucci said.

One afternoon was spent paddleboarding and swimming at Valley Trunk Bay, where Tucci paddled to the pristine beach for a stroll, where her footprints were the only ones to mark the sand.

Anyone who sailed the BVI knows that the close proximity of its islands allows for the day’s whims to carry you almost anywhere you’d like to be, so the trip back to civilization for a Day 4 Covid test was a low-key affair. Tucci and crew sailed west to Nanny Cay, where they docked and were picked up by a taxi to be taken to the hospital for testing, all pre-arranged through the BVI gateway and included in the $175 fee.

“The whole thing took about an hour,” she said.

The crew would receive their test results the following morning, so they sailed to Peter Island’s Little Harbor, knowing that the famous Willy T was around the corner for when they were officially out of quarantine. With results delivered by email, the crew lowered their yellow Q flag and had no restrictions on where they could visit.

Onshore exploring included Virgin Gorda where the crew enjoyed views of North Sound during a stop at Hog Heaven and a happy hour at Sugarcane overlooking the Dogs and Tortola. A quarantine anchorage near The Baths offered a unique experience: paddleboarding to a beach where Josie was the only visitor.

But in between all this very normal charter-type activity, there was something else Tucci was finding. Because there just aren’t as many people sailing around the BVI right now, she was meeting lots of fellow charterers and seeing them over and over again.

She talked with a pair of families chartering a big Moorings cat and by all accounts having a great time. Water toys, paddle boards and kids having a blast, it was the kind of fun most people haven’t experienced in a long time. She also ran into a father and son sharing a sunny charter a few times over.

And then there were moments that are the kinds of experiences you only find in the BVI. Although Tucci stayed behind to work on the boat (onboard Wi-Fi can be a blessing or a curse), the rest of the crew ran into none other than Foxy Callwood, owner of the must-stop Foxy’s Tamarind Bar on Jost van Dyke. Later the crew stopped by for dinner, the only people in the place.

And that’s one of the things to note about sailing the BVI now: some businesses aren’t open during the quiet midweek, there just isn’t enough business to support keeping the same hours they’ve had in the past.

A negative Covid test is also required to re-enter the United States, although conveniently on eight-day charters, the Day 4 test suffices. Tucci and crew, however, visited the nurse on Jost van Dyke who offered tests from a small tent, with the bonus of more time to explore the island.

Although the BVI is a bit different these days, the charm, beauty and fun remains. And for pandemic-weary sailors it might be just the tonic they need.

“This was a real escape from the misery of being stuck at home working at my dining room table,” Tucci said. “It was such a nice break. It was very much an unwind, relax and slow down kind of trip.”

For more information, visit: The Moorings The Moorings 4500 slips through the empty BVI.