The race down the West Coast from Newport Beach, California, to Ensenada, Mexico, has drawn racers for 75 years with fun and challenging sailing “When he was abeam of us, we threw out anchor and that was our finish line that year!” Bain explained. 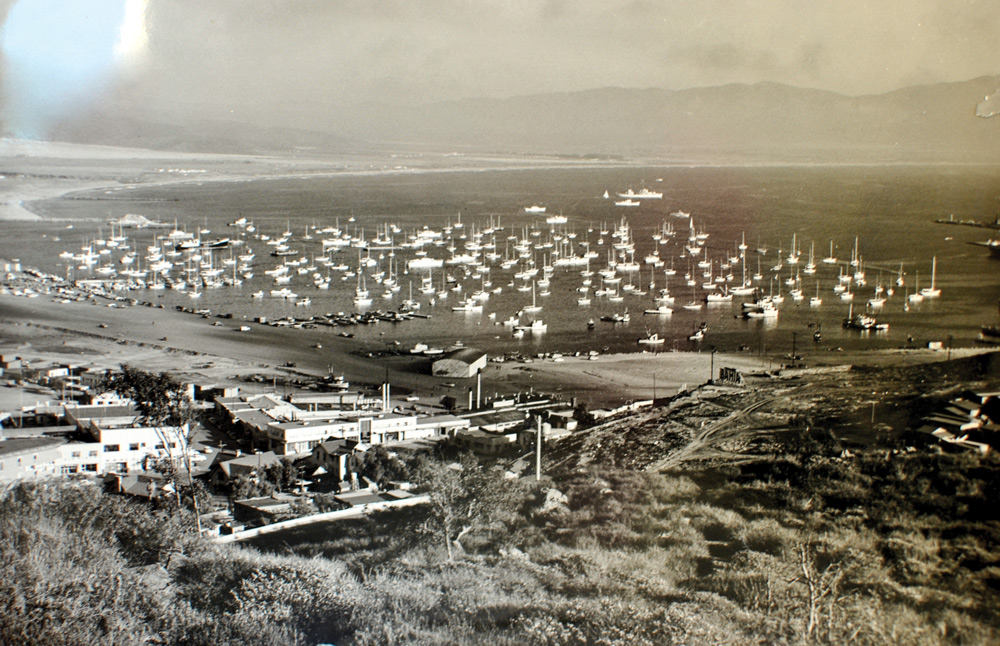 Boats fill Ensenada Bay in the early days of the race, dropping their anchors and hitching a ride ashore on a fisherman’s panga.

Like many sailors I can’t recall the exact number of N2Es I’ve done. Of course I remember my first race to Ensenada aboard a Cal 40. We using the race as training for the Transpac Race, becalmed 10 nautical miles from the finish, we finally drifted in after midnight of the second day so late only one bar was still open. A couple of years later, on a Soverel 33, we rocketed toward the finish line Saturday morning in a busting breeze. When the hotdog skipper accidentally jibed the boat and got knocked silly by the boom, the trimmer merely straddled his slumped body and finished the race. We quickly doused the spinnaker and offered first aid (he was fine). Another time, racing a J/35 in light air, we opted to motor in so we didn’t miss the parties, but years later racing aboard a Catalina 34, we nearly missed our ride home, the breeze was so scarce and the crew so determined to finish the race. Most years conditions are mixed, but as yacht and sail design and construction has advanced, more often than not we beat the sunrise. Racing aboard a Hylas 49, Santa Cruz 50, C&C 41,  J/120 and our Class 40, I’ve made several trips to the podium, winning the Caroline Starr Trophy for best corrected time of an all-female crew a few times too.

For many years the race headquarters was at the Bahia Hotel, a horseshoe-shaped motel surrounding a grassy Roy P. Disney, racing his newest Pyewacket, a modified Volvo 70, finished the race in 9 hours, 47 minutes and 21 seconds, just missing the monohull record by 12 minutes. Tom Walker photos
Tom Walker photo
lawn. After finishing the race, sailors anchored (usually poorly) off the Baja Naval shipyard and caught a panga to shore, cut through the fish market and Civic Plaza and across the rutted streets, duffel bags in tow, to reach the Bahia. Racers sprawled out on the grassy courtyard drinking $1 beers and margaritas, clambering on the donkey statues and perusing the mile-long finish board. Yacht clubs rented guest rooms and hosted parties with more drinks, and a chance to shower and change. The balconies of the hotel were loaded perilously with revelers. The Sunday prizegiving was raucous. In the early days, officers and dignitaries paraded along Avenida Adolfo López Mateos in blue blazers and red caps, carrying the bounty of perpetual trophies. Winner after winner was called to the stage with the crowd roaring, the festivities often punctuated with announcements that a boat was dragging anchor.

In recent years much has changed. Race HQ has moved to the more modern Coral Resort and Marina, and the boats as well. Festivities are a little more orderly and confined to the resort, although racers still head downtown for delicious comida callejera (taco stands and food carts) as well as for the gourmet dining and to peruse the silver jewelry shops that line the main avenidas, and markets with an unimaginable  selection of tequilas and local wines. And late-night revelers still wander downtown to Hussong’s Cantina, Papas & Beer and other cervecería. It seems Ensenada was the original “what happens here stays here” destination, so those legends will go untold.

As for us this year, our race and revelries were fairly tame. We’d departed our slip early on a gray morning but by the time we joined the swarm of eager racers gathered near the Balboa Pier the sun was starting to burn through. Team Yippee Kai Yay strut their stuff as they collect a third place trophy in class
The breeze, although from the southwest, held at 8 to 10 knots and following the progression of rolling starts  on dual inshore and offshore start lines, we took off. Solid and steady, we ticked off the miles beneath our massive masthead genoa until finally the angle was right for the spinnaker. We dashed past Point Loma and reached the Coronado Islands at dark, praying the wind would hold. It did, but a late night shift meant we’d throw in several jibes as we made our way down the course. Anticipating a 3 a.m. arrival, the wind shut down in the final five miles. How is it the last 20 minutes always take two hours? We struggled in with the faintest of breezes, with multiple sail changes, crossing the line at last at 5:17 a.m. with an elapsed time of 17:27:55. Nothing close to the record monohull time of 9:35:34 (set by the 63-footer Aszhou in record-wrecking 2016) but good enough for us to garner third in our division.

From the very first N2E in 1948 sailors have had a love-hate with the race. Deemed a spectacular run down the 125-mile coast, sometimes the winds turn and that run is a beat, or it eludes you altogether, peppered with rain, fog or blazing sun. And outside influences such as rumors of drug wars, swine flu, and ultimately a pandemic, have affected attendance. But in the end the event has prevailed and is inching toward an exciting 75-year anniversary in 2023.

Will we do the race again? For now, we say no, but give us a few months and no doubt we’ll be saying, “sí, sí” again.