Saved from the scrap heap

After falling off its jackstands, a J/105 gets repaired and retrofitted by a new owner

During a fierce winter storm that plowed across New England in March 2018, the J/105 Eclipse tumbled off its jackstands at the Jubilee Yacht Club in Beverly, Massachusetts. Not unlike Humpty Dumpty’s shell, some of the 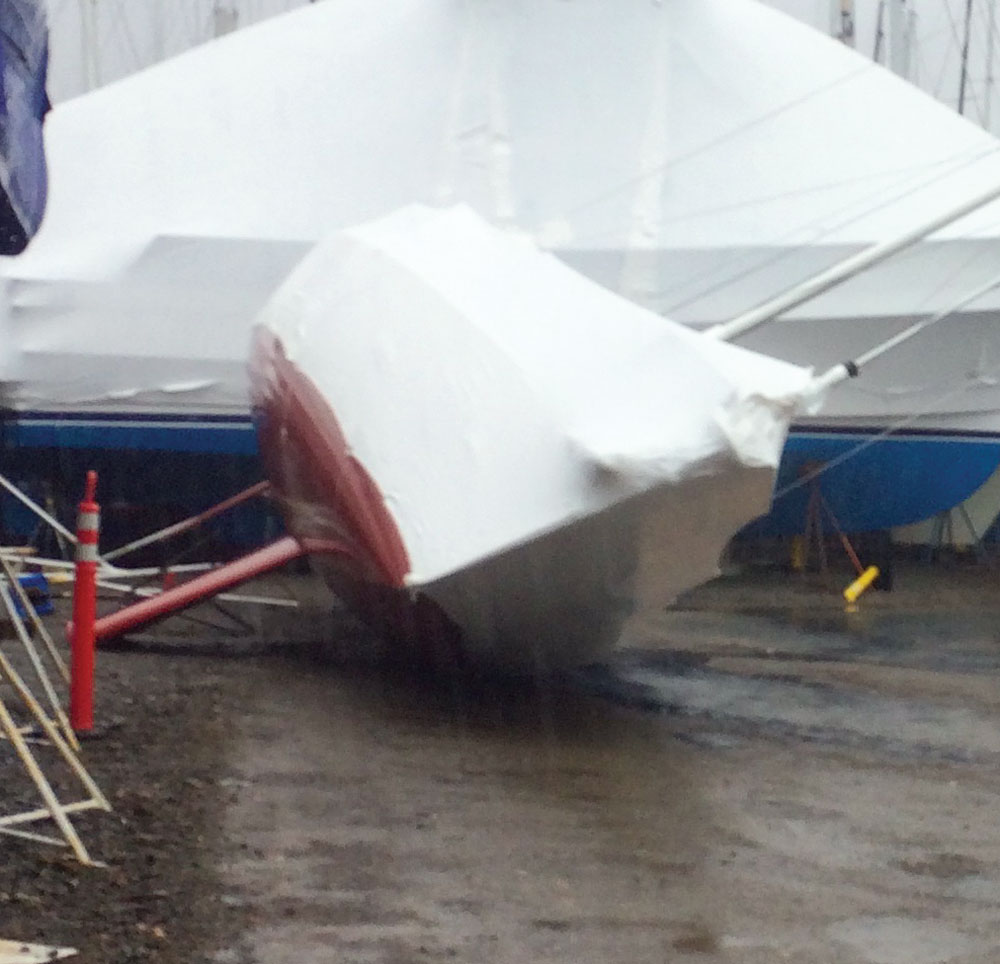 The J/105 fell off its jackstands in a winter storm.

boat’s bulkheads cracked upon impact. The boat was hauled to Brewer Yacht Yards and Marinas in Rhode Island where the boat’s owner met with insurance company representatives and declared it officially totaled. At least it seemed that way to just about everybody except Ric Dexter, a devout J/105 sailor fighting a battle against pancreatic cancer and looking for a project to keep his mind off doctors and hospitals.

Dexter had received word about the boat from his longtime friend Andrew Flaherty, the so-called gelcoat wizard and owner of Marblehead Composites, a regional boat repair business. According to Flaherty, the damaged J/105 might be worth a look. Eclipse was built in 2000 and had spent its first six years as a freshwater boat in an Oklahoma lake. It held promise. Retired from his lengthy career at General Electric’s aircraft engine division in Lynn, Massachusetts, Dexter was eager to put his engineering skills to new use.

To describe Dexter as a man of great patience and determination would be an understatement. But that’s getting ahead of the story. Dexter had spent the previous 15 sailing seasons doing all the maintenance as well as skippering the J/105 Circe’s Cup, which was moored in nearby Marblehead Harbor. When Circe’s Cup was put up for sale, he found himself without a boat to sail for the first time in his life.

“I’m 65, and I started sailing relatively late, but I love it and I enjoy every minute that I’m out on the water,” said Dexter, an avid racer who also serves as official measurer for Marblehead J/105 Fleet 2. “Back in the early 1990s, I hired a guy at GE who belonged to the Jubilee Yacht Club and owned a Pearson 33. It was a nice boat and he taught me to sail.”

Moisture meter in hand, Dexter brokered a deal for Eclipse and had the boat hauled from Rhode Island to Flaherty’s shop back in Massachusetts. Squeezing the boat inside the warehouse was tricky, but Ronnie Wiswell, the ace boat hauler from Marblehead Trading Co., made backing in the 35-foot hull with its 11-foot beam look like child’s play.

“Andrew has a heated warehouse, so that’s where we put the boat. It was the last one to fit inside. We had to retract the bowsprit just to close the barn door,” he said, proudly noting the J/105 is the first boat ever designed with a retractable bowsprit. “Being the last one in meant I’d have to be the first one out in the spring.”

The clock began ticking. It was the end of October. Dexter figured he had seven months to complete the extensive repairs before the other owners started clamoring to get their boats out of the warehouse and into the ocean.

“The pressure was on,” he said, having presumed a May 8 deadline. “I started stripping the boat of every last piece of hardware, every fitting. I took out the damaged bulkheads, the settee, the headliner, the entire interior, all the wiring, the head, the electronics. It all came out and then I went to work.”

Looking back on the project, Dexter estimated he invested 750 hours in the repairs. Of those hours, 25% were spent on actual repairs and 75% addressing damage caused by a lack of maintenance.

“The boat had a lot of water damage from years of neglect,” he said. Balsa-cored hull and decks such as the J/105’s need to be repaired if there is water intrusion.

“I knew I had to start by rebuilding the bulkhead near the middle of the boat. That one cracked when it bounced.”

Luckily the fall did not damage the mast or boom. 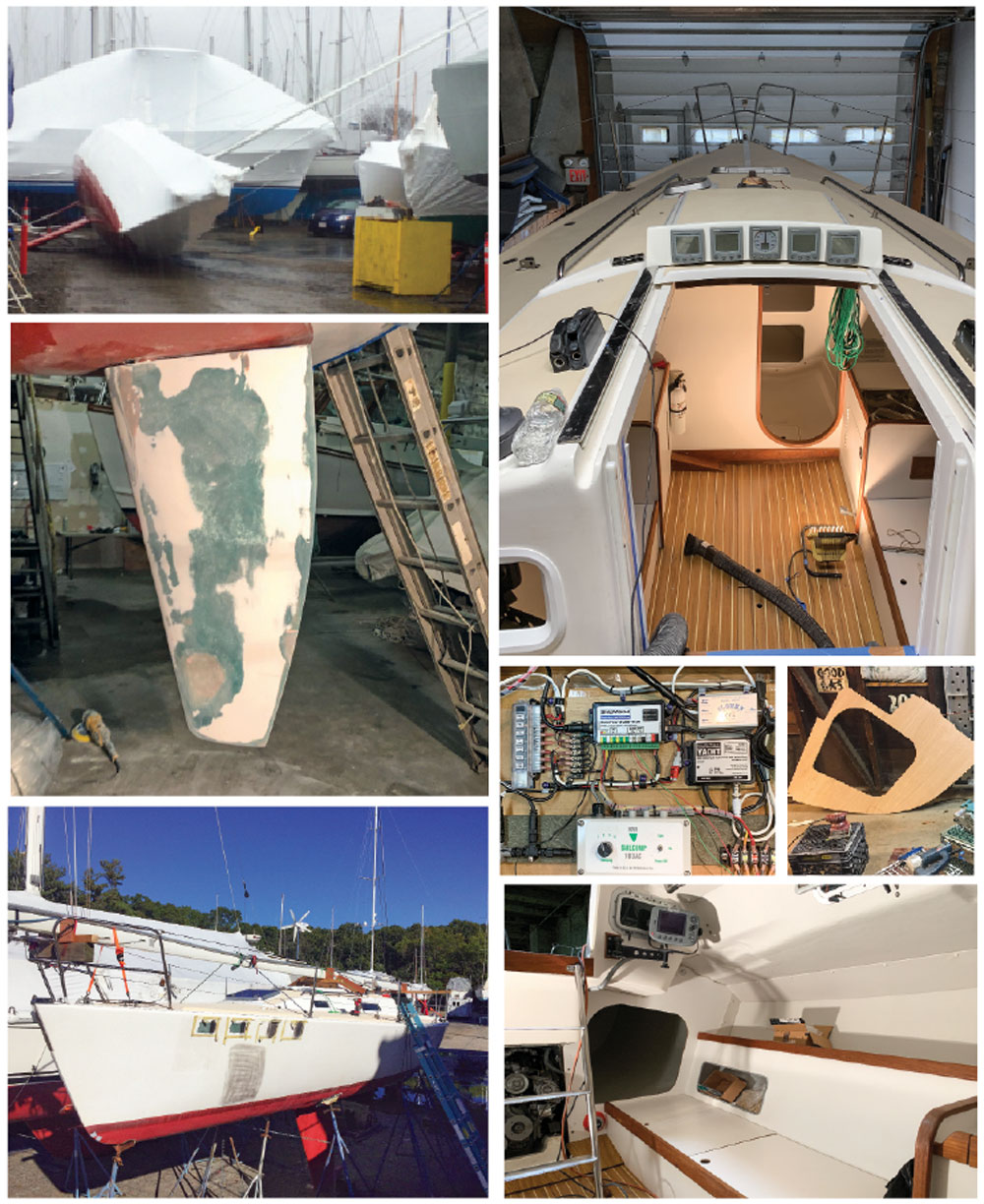 The J/105 fell off its jackstands in a winter storm, top, bought for a song by Ric Dexter, who put together an extensive seven-month refit that included repairs to the damaged ring frames, above, and the rudder, above middle. Other fixes and updates inclu
Continue reading: Page 1 | Page 2 | Next