Spice up a charter by throwing in some competitive fun 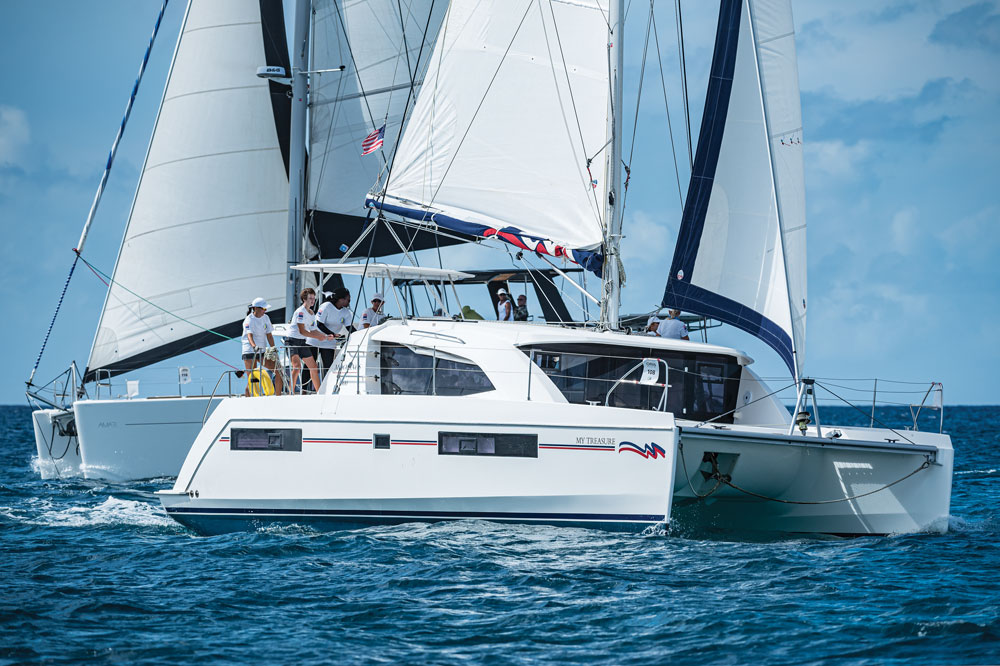 The crew of My Treasure rounds the mark.
Laurens Morel photo

So too did the nearly 20 boats that entered the first edition in 2019. Although stalled by the pandemic, the regatta has had a promising showing since, with hopes of flourishing in a post-Covid future.

“Caribbean regattas over the past decade have demonstrated a move toward greater focuses on niches,” said Ferron, who helped found the Heineken Regatta in 1980. “There’s a classic niche in Antigua, a superyacht niche at the St. Barth’s Bucket,  a long distance niche at the RORC 600 and upmarket niche at Les Voiles. We wanted to latch onto a niche that was likely to have growth and excitement, and chose this one, which coincides with a long tradition of multihull building and sailing in St. Maarten.”

Part of their mission will be defining and reaching the vast array of multihull sailors in the Caribbean, Ferron said.

“We know bikers have events that focus on two wheel enthusiasts, but seem to come from all walks of life,” he said. “The same challenge appears to apply to multihull sailors!”

That was confirmed as we met our competitors that evening, which ranged from sailors aboard slick custom carbon 50- and 60-footers to speedy Diam 24 tris. But rubbing elbows around the bar at St. Maarten Yacht Club, we all felt like friends and equals.

Maggie, Jordan and IG trim while Annie puts the boat head to wind.

Race day arrived and the first race was a 10-nautical-mile sprint from Simpson Bay west to Baie Longue and return. But the second race was a 22-nautical-mile romp east to Molly Beday islet and back, rounding Proselyte mark on the way home. It was a bit unnerving to be skirting so many sites named for shipwrecks, but equally reassuring to have experienced local sailors aboard. It’s always best to solicit local knowledge when chartering abroad.

At the same time the smaller boats were racing, the faster boats were racing 60 miles on a power reach from Simpson Bay, around St. Barth, and back to St. Maarten. Steady winds in the mid-20s had the winners sailing at 25-knots as they dashed south and around the rougher windward side of St. Barth. Greg’s Bieker 53 Fujin won, finishing in less than three hours, 45 minutes.

We approached Molly Beday’s rocks and reefs to the southeast of Oyster Pond with all but one competitor ahead, and the last close astern. As part of the Pirate Fleet, we were clearly the slower boats, but still our goal was to catch as many as we could. It was tough stuff when sailing on the same course as privately owned boats with snazzy colorful spinnakers for the downwind run. But we had one rival to keep at bay and by now our team was secure in their positions, a great mix of brawny, enthusiastic youngsters to muscle in the sails even though there was one push-button winch alongside sage veterans. We bested our opponent on corrected time in race two and were proclaimed the day’s winner in our class. After a short debrief from Annie, the customary post-race frivolity ensued.

The advantages of a charter boat include comfortable accommodations aboard. Our boat could sleep six to eight in air-conditioned comfort with two heads, although just three non-islanders stayed onboard. Each morning the crew convened early as coffee brewed, taking advantage of the abundance of room to stash gear and provisions.

We were pirates after all, so on Day 2, when the race committee posted the 30-nautical-mile around-the-island course, our division mutinied. With the wind forecast in the high 20s and seas to match, we and our rivals begged for a different course. Kindly the race committee agreed and started us on a route that began with a windward jaunt through Simpson Bay and a minefield of superyachts.