Somewhere along the line I learned to steer clear of religious discussions; they have no possible conclusion and they frequently become acrimonious. Exactly the same is true of an investigation of anchors. The variation in types of anchor and types of sea bottom makes it difficult to do much more than state the obvious. I will only note that on our 15-ton, 39-foot steel cutter Moose we have removed the CQR and the steel fluke type and are very satisfied with a 50-pound Bruce and an 80-pound fisherman anchor. 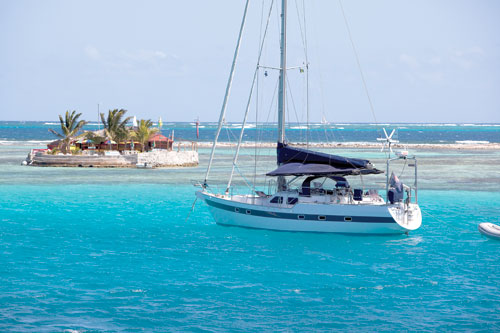 Safely past the choice of an anchor, perhaps we can all agree on the actual technique of anchoring. Let's walk through an example, from arrival to cold drink-but first, a personal opinion. Irene and I once watched a yacht arrive in a Caribbean anchorage late one afternoon. The skipper was a big solid sort of guy and he put his boat through several circles, like a dog about to lie down. He barked an order and up to the foredeck trotted a petite woman, with leather gloves that came up to her elbows. The poor woman had to wrestle the anchor loose and ease it over the roller, while managing the run-out of chain. Brutus stood behind the wheel shouting encouragements. This seemed silly.

Parts of the anchoring procedure can require strength, so it seems practical that chain, rope and shackles are equipment best suited to a stronger person. I would suggest that the stronger person be put on the foredeck and the other takes the helm unless you are fortunate enough to have a windlass.

Frequently you'll anchor where other boats are already anchored, so the first task will be to agree where you'll position your anchor. I like to stand on deck just forward of the cockpit so we can discuss, at a conversational level, where to set up shop.

Depth of water is often the deciding factor. Moose draws about six feet of water. By looking at the beach I can see that the tide is high and I know that the tidal range is about three feet. The wind may change after I'm anchored and I don't want to be blown into more shallow water, so I calculate: six feet for the boat, three for tidal drop, three for swing and six more to clear the bottom enough to sleep well. So I need to find a spot outside the 18-foot contour. 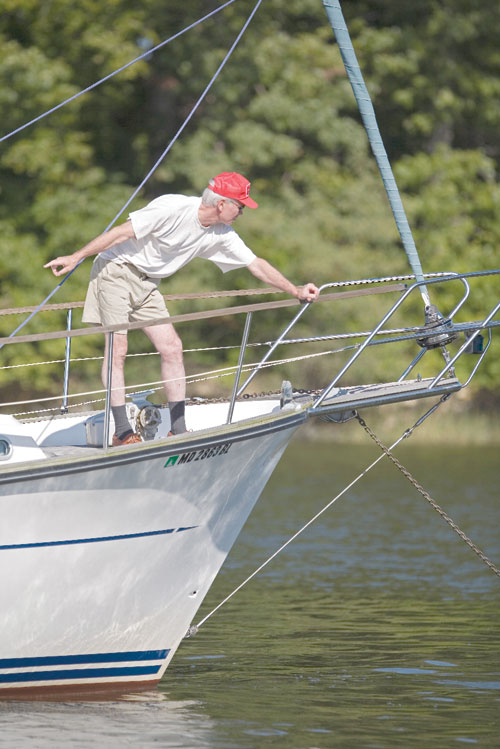 Usually in a busy anchorage you will want to put your boat into a pocket formed by three or four other boats. Both etiquette and safety will come into play here. It's courteous to allow yachts already anchored as much privacy (space) as possible; if they wanted you for dinner you would have been invited. You may be advised by an anchored boat at this time that you are too close for their comfort. It would probably be correct to anchor elsewhere, if only to avoid continuing unpleasantness. Safety also dictates that you try to position yourself in the middle of your chosen pocket. Doing so is easy.

A good rule of thumb is to have five to seven feet of rode out for every one foot of water depth at high tide.

Naturally, if there is any wind, boats will lay to their anchors; in other words, their anchors will be in front of them. In a flat calm a boat may lay to a vague current and the weight of the chain on the bottom holds it in place; the anchor might well be behind the boat. In this sort of an anchorage the positions of the boats will alter radically when the wind re-establishes.

At this point you know that the other yachts have out about 100 feet of chain and that they are lying to the breeze. To position yourself, simply motor slowly upwind (when you look straight ahead, the sound of the wind on both ears is equal.) Go through the spot in the pocket where you eventually want to end up. When you are about 120 feet past that point, drop the anchor. The helmsperson responds by stopping the boat smartly. All this can be accomplished with a couple of hand signals and no hullabaloo.

When the anchor hits the bottom the foredeck person signals the helm to reverse slowly as the 100 feet of chain pay out. Snub up the chain now and the anchor will gently bite in. With the gearbox in neutral allow the boat to lay back to wind. After this occurs, shift back into reverse and slowly bring the rpm up until the chain pulls straight and fairly taut. Give it a fair test. Attach your snubber, subtly draw your finger across your throat ("kill the engine") and walk quietly aft; you will be noted and admired.

A final point to remember in the protocol of anchoring among other boats is that the first boat to drag its ground tackle is obliged to weigh and reset its anchor. You should pull it up and re-anchor at the first sign of dragging. You may be fouled by a chunk of coral or a plastic sack, and dragging down on anchored yachts, hoping for a miraculous reset, doesn't show the concern for property that others appreciate. Generally, in a group, it's clear who has dragged, but there are those who will argue, with a clean conscience, that another boat has dragged upwind.

Once you have these fundamentals at your command, try anchoring in silence-with the spot chosen, the rest of the exercise is executed purely by each partner anticipating what comes next. This will wonderfully frustrate the sadistic glee that your new neighbors (and all of us) secretly wait to indulge.

Moorings
Since we began by mentioning religious discussions, let's move directly to the ultimate leap of faith: picking up a mooring.
In Ko Rok, Thailand, we picked up a mooring in a national park. It had a new, two-foot-diameter float with a chafe-protected attachment loop and a thick new hawser going down into the depths. Bulletproof Government Issue, I thought. Later, in the park office, we came across a surprising notice that warned against pulling on the moorings with the motor. Subsequent investigation revealed that, down in the murk, the hawser was threaded through a convenient hole in the coral and secured with a pair of overhand knots.

The bottom line is that when you pick up a mooring, you are placing blind faith in someone else's engineering talents, and betting the farm on it. I think it would be fair to quietly, but rigorously, back up against a mooring to see if it's reliable.
Picking up a mooring is a tougher job for the helmsperson than positioning the boat for anchoring. The foredeck crew can help a lot by standing at the bow and pointing directly at the mooring buoy with the boathook. If the approach can be made slowly and upwind, opt for this. At a distance of half-a-boat length the helm will be blind, so the foredeck should calmly call out the distance to the mooring buoy, all the while diligently pointing the boathook. As soon as the attachment line is picked up, signal "stop" and quickly lead the line inboard through the appropriate fairlead and drop the loop over the Samson post or cleat.

The great danger in this operation is that the boat will overrun the mooring before the foredeck crew has the line attached and that the boathook will be torn out of his or her hands. This is why the helmsperson must accurately stop the boat from going forward, or backward, at this critical time. If you can't judge your motion through the water, spitting (in a ladylike manner) onto the water surface will give you a fixed point of reference.

If you're forced to approach a mooring in poor conditions and tight quarters, and effectively manhandling a slimy, barnacle-encrusted hawser seems unlikely, try having a 10- to 15-foot length of line with a bowline in each end ready. Have one bowline over a strong point on the boat and the other led so it can be quickly one-handed through the loop in the attachment line of the mooring and then brought back to the strong point. You can fine-tune the arrangement later, but for now you're safely moored.