Regain control with a temporary system fashioned on board

Losing a rudder ranks high on the list of serious sailing emergencies, but it is one that can be managed on board with some know-how and preparation.

Whether the boat incurs damages, the rudder loses integrity, or actually drops away from the hull, a rapid change in the ship's speed can lead to loss of balance and crew injuries. As with any emergency situation that arises at sea, the first consideration is always crew safety; assess for injuries at once and delegate the most qualified person on board to administer first aid to anyone in need.

Before you begin slinging lines and lashing cabinet doors to the whisker pole, let's discuss how dropping a rudder affects the boat, since that drastically alters the boat's motion and determines what we need to accomplish in efforts to regain control. Two factors cause a sudden and drastic change in boat motion. Rudder loss moves the Center of Lateral Resistance forward, leading to exaggerated weather helm and the boat may immediately round up into the wind. The most severe affect is often caused by waves from abeam or aft toward the quarter; a deep rolling action takes place as the boat wallows in response to the seas. Initial actions must address these uncomfortable and possibly dangerous conditions. 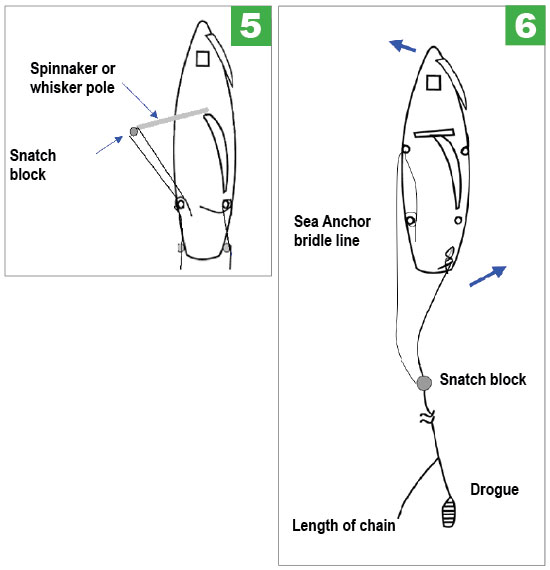 Weather helm is most easily countered by making various adjustments, including reducing the mainsail area, moving the traveler to leeward, easing the mainsheet to increase sail twist aloft and moving ballast aft.

Gain control of the boom and mainsail with the preventer or mainsheet tension. The response to ocean waves is less readily corrected, and ultimately depends on regaining steering control. However, heaving-to is always a great technique for easing boat motion while repairs are underway, but takes some maneuvering in this situation.

Without way on, first gain momentum by trimming sails to head down wind. Once the boat is moving with adequate speed, gradually head up by bringing the main up on the traveler. Luff the jib to decrease forward effort that will allow the bow to come toward the wind. When you've generated enough speed, you can attempt to tack as the boat comes up. If the bow goes through the wind, allow the jib to backwind then ease the mainsail down on the traveler. You are now hove-to. Bear in mind the main will probably have to be higher on the traveler to compensate for the windward rudder position you'd normally have.

If inadequate speed prevents the bow from turning through the breeze, you can ease the leeward jib sheet and haul the sail to windward with the windward sheet. If the jib can be brought to the windward side, the maneuver is completed by adjusting the jib sheet as necessary and dropping the main traveler.

You will probably have to play with the adjustments to get the boat to lie properly; about 45 degrees off the wind, coming up a bit and then falling down to leeward, but maintaining an approximately close reaching attitude. Once hove-to, the boat stabilizes and becomes much more accommodating.

The other immediate option for stabilization is to set a sea anchor, bridled to one side to establish an approximately 45-degree angle to the elements.

Once the initial deer-in-the-headlights anxiety is overcome and the boat has been temporarily stabilized, adopt a tactic for regaining control. A basic and practical method is by trailing a long, single warp from the transom. The warp trails directly aft when sailing straight ahead, and is shifted from side to side as needed to increase drag in the direction of a desired turn.
All components in this configuration can be formulated very easily from materials normally present on sailboats. The system is comprised of a bridle from the transom used to control the warp, the warp line, methods to create drag and a weight to keep the system submerged.

The bridle requires line of suitable length, such as a spinnaker sheet or spare halyard. Hardware includes four blocks and either a stout ring or large shackle.

The trailing line, extending 200 to 300 feet aft, can be comprised of virtually any long single line or several lines tied together. Good options include anchor lines, sea anchor rode, halyards, spinnaker sheets or guys and jib sheets.
Then tie a series of knots in the warp line or attach a variety of objects to create drag. Some options are drogues, fenders, a storm jib, sail bags or duffel bags.

Without some form of weight, most devices will lose efficiency by floating near the surface. Weight, in the form of chain, a small anchor or anchor sentinel keeps the drag device submerged and pulling.

To prepare for attachment of a warp to the control bridle, bend a large shackle or ring at the midpoint of the bridle line (Figure 1).

The trailing warp will be connected to this hardware to decrease chafe that occurs when lines are tied together directly. Once this connection is made, lead each end of the bridle through blocks at the quarters to minimize chafe of lines rubbing on the hull.

From the quarters, the lines are taken forward and looped through blocks (Figure 2) to gain purchase that make adjustments easier against the pull of the warp.

With the bridle construction complete, attach the drag apparatus of your choice to the warp end and then connect the weighted object forward of this device. Place this end of the warp onto the cockpit sole and prepare to connect the warp's forward end to the bridle hardware installed previously (Figure 3).

Once warp and bridle are wedded, toss the warp and its attachments into the water, and then pay out line until it's fully extended. Center the warp amidships to begin with.

Ship control is gained by shifting the drag of this warp from side to side as needed for course corrections. Figure 4 illustrates a turn to port as the starboard bridle is eased while the port bridle is tensioned. The warp moves gradually to the port side, effecting a turn in that direction.

Those who desire more precise and responsive direction changes will be happier once a wide base is created to increase leverage of the system. This can be accomplished by looping one side of the bridle through a block placed at the end of a spinnaker or whisker pole that is extended and secured outboard (Figure 5). The line is thereafter taken aft to the cockpit winch and controlled as before, but with a wider base the warp has a greater range and extends farther outboard laterally for more turning control.

Yet another system makes use of gear that comes as standard equipment with the sea anchor (Figure 6); namely its control line normally used to adjust the sea anchor rode's angle to the bow.

Figure 6 illustrates the sea anchor's control line, with float and snatch block, attached to a warp that extends from the starboard quarter cleat. The control line leads through the block at the boat's port quarter, forward through the turning block, and thence back to the cockpit winch.

Steering is controlled by either easing or tensioning the control line to position the warp as desired.

The sea anchor control line is comprised of snap shackle, line and float device. The snap shackle is placed onto the warp, and its bitter end is taken through a block at the opposite quarter, to the turning block forward, and thence back to the cockpit winch.

Warp positioning is controlled by the amount of tension applied to the control line. Sailing straight ahead is done by bringing the warp to an amidships position. Turning to starboard is accomplished by releasing control line tension, allowing the warp to move more to starboard. Tensioning the control line brings the warp to the port side, effecting a turn in that direction.            The initial surprise and fear that follows a sudden loss of steering control is only natural. If no injuries were incurred in the original incident, a grand opportunity presents itself. I'll tell you by experience that there is no measure of the satisfaction gained by overcoming such adversities at sea; striving together as a team to make landfall with that stricken boat. That is seamanship at its best, and you'll revel in the satisfaction forever.