Quiet, clean and economical are just some of the benefits of 'green' auxiliary power 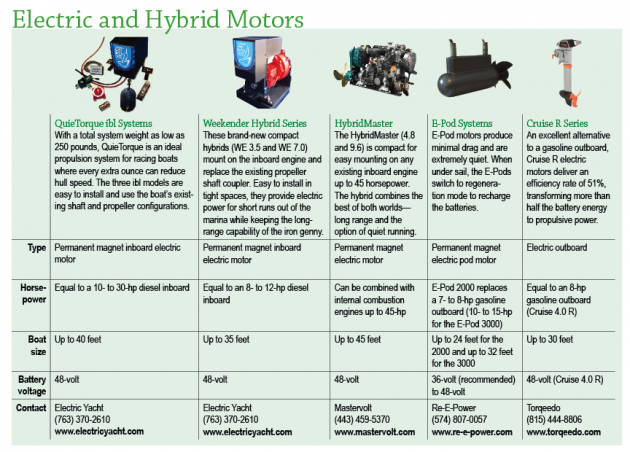 I hardly use a tank of fuel in an entire season," the purist sailor boasts, gleeful about all the money he or she is saving by running the inboard just long enough to leave the harbor.

Thrift isn't the only reason purists don't like the iron genny. Inboards are noisy, they vibrate and they stink, especially if you're running downwind under power. They also require consistent maintenance.

Until recently, there was no alternative to the gasoline or diesel engine, but today there is. Electric motors and pods are becoming more common in sailboats, eliminating the fossil-fuel drinkers completely. Parallel hybrids-electric motors that can be mounted on an inboard engine to spin the existing prop shaft-are still in their infancy, but they too are available and provide a clean, quiet option of going electric for a pleasant day on the water without firing up the inboard. Many day and weekend sailors are taking a good hard look at going electric, while others, particularly cruising sailors, are seriously considering adding a hybrid electric motor to their existing inboards.

The advantages of going electric are numerous. The electric motor delivers power instantly with no waiting for it to warm up. The motor won't stall at slow speeds. There's no transmission to burn out, no oil to change and no need to carry heavy fuel (a gallon of diesel weighs about 7 pounds). A typical 30-horsepower inboard weighs 500 pounds. An electrical propulsion system weighs much less, making it great for racing. There's almost no maintenance (with AGM or gel batteries). Quiet running is another important benefit of electric motors.

Electric inboard motors can replace existing diesel or gasoline engines as a repowering alternative. The motor mounts on the original engine mounts, and the shaft and prop are simply connected to the electric motor. An electric retrofit can even be done without hauling the boat out. Pod propulsion, meanwhile, is just what it sounds like. An electric motor inside a bullet-shaped housing is mounted to the hull and turns a three- or four-blade prop. A hybrid motor is an electric motor mounted to an existing inboard engine. When running electrically, a battery bank powers the electric motor, which turns the existing prop shaft. Some hybrids act as generators when the inboard combustion engine is running, channeling energy back to the dedicated battery bank.

An electric motor is far more efficient than an internal combustion engine. Some of the power of a conventional inboard is diverted to run equipment such as pumps and alternators. This means that an inboard rated at 30 horsepower isn't delivering all the horsepower to the prop shaft. Electric motors don't have similar power draws from auxiliary equipment. In general, you can get essentially the same boat speed from an electric motor as you would from an internal combustion engine rated at twice the horsepower.

The key to these systems is a large battery bank capable of delivering enough electricity to power the motor for several hours or more at reduced speeds. Going more slowly dramatically decreases power consumption. Every extra knot and a half of speed doubles the power consumption, so poking along has its advantages. The more capacity you have in the battery bank, the longer you can run and the farther you can go (you can also buy a small diesel generator to provide longer ranges). Ranges of 10 to 15 nautical miles are not difficult to achieve with an electric motor system, some of which only require dedicated battery banks with amp-hour capacities of between 100 and 250, but obviously more capacity is better.

Deep-cycle lead-acid batteries are the least expensive type and they will get the job done. However, most experts agree that the closed AGM and gel types are better suited to running electric motors, in part because they are more easily recharged. Lithium ion batteries are less bulky, netting a savings of 70% in volume and weight, while delivering charging cycles three times that of lead-acid batteries. The downside is the expense. The battery voltage required on many electric motor systems is 36 or 48 volts, making it easy to configure a bank comprised of six-volt cells.

Going electric is a no-brainer for the vast majority of sailors who only go for a daysail on the weekends, and it's not without merit for cruising sailors either. Best of all, electric is good for the environment, too.