A couple's journey from Germany to La Paz, Mexico included their Hereshoff 28

If you're walking through a marina along a major seaboard, with hardcore cruising sailboats tied up and moored in every direction, you'll know that at least a few good sailing stories are swirling nearby. If you're sitting on a sunny patio in a Sonoran Desert village, however, that sense might elude you a bit.

Eleven dusty miles from La Paz, the bustling capital of Mexico's Baja California Sur, is the village-come-suburb of El Centenario and the quiet lanes of El Comitán, a neighborhood filled with birdsong, riotous bougainvillea and 1,400-year-old cardón cacti. Here, Dr. Eberhard Holzgraefe and his wife Renate maintain their modest home of nearly 30 years as well as a 15-year-old assemblage of rental casitas, cabanas and motel rooms known as Hacienda Del Sol. 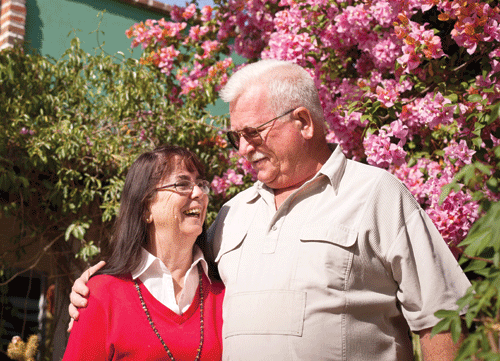 Eberhard Holzgraefe landed in El Centenario after sailing much of the world in Möwe, his Hereshoff 28. He and wife Renate now make their home there and run a resort. All the proceeds from the resort are donated to local charities.

Dr. Alemán, as he's affectionately known throughout the city, has a beaming smile, an impressive collection of jokes ready for the telling and an encyclopedic wealth of area-specific information, from where to get the best coffee in La Paz and which evening to stroll the malecon, to the best spot for a box-canyon hike and the least-crowded beaches. He welcomes neighbors and guests for cookouts, and he'll check on each visiting household daily, just to see if he can help with anything. Or perhaps regale you with a story or a joke or two.

You may spot him and Renate later in the evening, enjoying a twilight stroll to the beach with their German shepherd and little black cat trotting along. And you might wonder what brought this stout European optometrist to this tranquil desert place.

As it turns out, a Hereshoff H28 named Möwe ("seagull" in German) carried him from the Old World to the new, and they circled the globe together on the way.

Holzgraefe was born in Berlin during World War II, and as a youngster, he became a refugee to West Germany. It was here, on a lake in Kiel, that he learned to sail. While he set sailing aside so he could finish university and his professional training, he returned to it as soon as he could; he purchased Möwe in Holland in the early 1960s and cast off for a different life.

"The world is so big, and Germany is so small," he said simply.

He sailed to Gibraltar and Morocco first, then down the West African coast to Cape Town. From there, he explored Madagascar before returning to Durban, South Africa.

"I didn't like the climate, so I left again," he said. "I hugged the east coast of Africa and then sailed to India, Malaysia, Singapore. I always took my time; whenever I found a nice place, I'd stay awhile."

Möwe sailed on to Hong Kong, Japan, Australia and New Zealand, then skipped across the South Pacific to the Marquesas and, ultimately, Hawaii. Holzgraefe acknowledged that he had a few problems; after all, on long passages, things break. But the boat, he said, did her job well.

Holzgraefe undertook his voyage alone, and he remained alone for the duration.

"I didn't want to take on the responsibility for another person," he said. "But then I had to face the psychological factor of sailing alone … you have too much time to think."

The grin faded and the bright eyes focused on an invisible horizon as he recalled those long bluewater passages, days and even weeks alone at sea. He said no matter how many times a singlehanded sailor does it, each passage follows a pattern.

"Before you start a long passage, you're busy preparing everything-provisions, water, fishing gear," he said. "Then you raise the anchor and hoist your sails. You're excited for a new trip. You're overwhelmed and so happy.

"After a few days out of sight of land, however, the boat gets smaller," he continued. "You're just a speck in a huge ocean. Then comes the time when the fear sets in, especially if you run in bad weather. You think about everything that can go wrong, and there's the temptation to turn and go back. But your pride won't let you.

"Imagine, you're out there on a gorgeous day; the fish are jumping, you're moving in good trade winds, and you even saw the green flash at sunrise. There's no better place on earth than this.

"Then the barometer drops lower and lower, and the bottom falls out. The sky isn't blue anymore, and the waves are getting bigger. Something's coming. So you put on your harness, you check to make sure your life raft is ready to deploy, you secure your deck and everything down below, you close the hatches and make sure the boat is as waterproof as possible, and perhaps you heave-to. Then you pray."

Ultimately, the blow ends. The weather turns calm and clear. You have a day or two where you can sleep. And somewhere along the way, you gain the peace of the passagemaker. The boat no longer feels small, the fear is gone, and you become part of nature, part of the ocean.

"You don't see yourself as a foreign object anymore," Holzgraefe explained. "You're just part of it all, so you don't mind if it's blowing like stink, with huge waves that you're fighting through."

Eventually, the occasional resting seabird will turn into flocks of birds, and you'll see some mist as well as the silhouette of an island or a mountain. The air will smell differently. You've nearly reached port.

"Arriving in an anchorage is the best moment," Holzgraefe said, grinning. "You drop the hook in crystal-clear water, and you see it grabbing the sand perfectly in 50 feet. You don't give a damn about anything; you drop into your V-berth and sleep."

He and Möwe repeated this dance over and over, making their way from Hawaii north to Canada and Alaska, exploring the Inside Passage and then cruising back down the West Coast to San Francisco. Eventually, Holzgraefe discovered La Paz and "swallowed the anchor" for the last time.

"As a sailor, it's impossible not to love the Sea of Cortez," he reflected. "Some islands are straight out of the South Pacific, where the only footprints in the sand are your own. And contrary to the Caribbean, there are not bars and entertainments everywhere. Here, your entertainment is nature."

Holzgraefe attributed his decision to build a life in the Bahía de La Paz to three things: the underwater world, with its abundant sea life and startlingly visibility; the Sonoran Desert, with its ancient cacti, multihued volcanic mountains and secret canyons; and the city of La Paz itself, with its universities, theater, music school, art galleries and cosmopolitan free-port shopping.

So here he made his home, with fellow optometrist Renate, whom he met at a conference and who shares his love for Baja California Sur. The couple realized they had three problems, despite living in such a sublime desert oasis: They didn't want to spend their time only on recreational pursuits, they wanted to enjoy the company of interesting people from all walks of life, and they wanted to do something to give back to their adopted community.

"Renate had the idea to make a peaceful little resort and welcome people from all over the world," Holzgraefe recalled. "And we knew the local charities needed help, so we decided to donate all our income from the rental properties, after expenses. Not even one centavo is payment to us."

The Holzgraefes started with the Red Cross and the city's two orphanages, one for newborns up to age 5 and the other for school-age children. Since then, they've taken on Desarrollo Integral de la Familia, EMAS, a nursing home and the local equivalent of the Salvation Army.

The couple also helps individuals who are in need, such as a 14-year-old Paceño boy suffering from epilepsy.

"People come to us," Holzgraefe explained. "We check out the situation and support them too, if we can."

And what of Möwe? She's on a trailer in the Holzgraefes' garden; a local university charters her, and she needs a new mast before she is put back in service.

No, you might not know what stories lurk in the back lanes of El Comitan if you're just driving past on Mexico 1. But if you stay at the not-for-profit Hacienda Del Sol and get to know Doctor Alemán, you'll learn all about an intrepid passagemaking sailor who spent his younger years traveling the world in search of a better life-and who is now spending his retirement years helping to provide a better life for others.