The late yacht designer Olin Stephens once eschewed going barefoot on deck, insisting boat shoes were necessary to keep sailors from stubbing their toes on unforgiving hardware. He might have thought differently had he stepped aboard the Swan 66FD.

Besides the boat's obviously strong build, among the first things to impress a visitor are the clean lines and flush deck. Absent are protruding hatch covers, blocks, cleats and running rigging. The linear view is a showcase of teak, creating an overall streamlined look that is at once smart and handsome. Even the forward dodger, when retracted, is level with the deck. Although the Swan 66FD was designed by German Frers in 2007 and splashed into European waters shortly thereafter, its debut in the United States is relatively fresh, which is why SAILING accepted a late-summer opportunity to sail hull No. 1 on Narragansett Bay near Newport, Rhode Island.

Lionessa was docked at the Hinckley yard in Portsmouth where we were met by Keith Yeoman, president of Nautor's Swan USA East, along with skipper Andy Quarterman, first mate Moira Foster, and Ettore Mattiello from Nautor's Swan in the Mediterranean where he represents Italian businessman Leonardo Ferragamo and a group of investors who have controlled and managed the company since 1998. All were eager to get out on the water rather than sit at the dock and point to the boat's finer features.

In minutes we were cast off, the 165-horsepower Austrian-made Steyr diesel engine purring toward open water and easily pushing all 30-plus tons quietly and efficiently. When the docklines were stowed, Foster pushed down on the stainless bow cleats, which disappeared into the deck. Presto. Once under sail, the geared folding propeller also tucked away to reduce drag.

It was a calm day, the wind threatening to wimp out at 8 knots, which might have brought an end to the fun aboard some boats, but the Swan 66FD doesn't require much of a breeze. We moved along, until we reached the open bay where the wind speed was 10 knots. It was there that the hull picked up and soon we were clipping along, the boat heeling nicely. 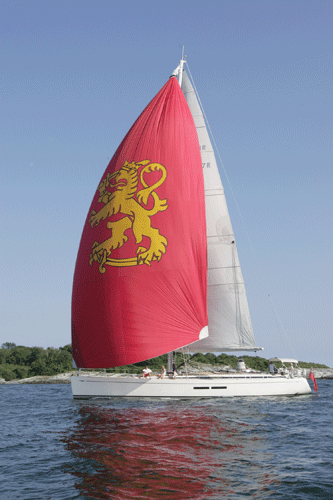 Quarterman graciously offered the helm-twin, leather-covered carbon fiber wheels. The wheels themselves were another mark of quality, as were the leather pouches affixed to the twin steering pedestals, affording a place to store small tools or a handheld GPS or radio. The boat was laden with these "little touches" above and below deck.

Both canted pedestals were fitted with a binnacle compass, but the starboard pedestal was literally a command center with push-button controls for the boat's myriad electronic and hydraulic features. The deck layout left ample room for the helmsman to maneuver and directly behind is a cut-out transom that acts as a landing platform for the inflatable. A cavernous storage locker on the platform can accommodate a deflated tender and its outboard engine.

Without stepping far from this station, it was possible to read the GPS and navigation displays, control the powerful electric winches, adjust the tension between vang and boom, operate the engine, and press down with a toe to activate the bow thruster. We had seen the latter device demonstrated at the dock, illustrating how few hands it takes to sail this 66-footer. 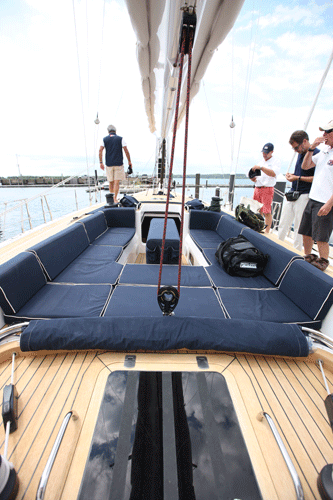 During our sail, Quarterman was pelted with general and esoteric questions about the boat's performance and handling characteristics. He obliged with good-natured answers, joking that everyone who buys a Swan 66FD contacts him because he has been at the helm the longest.

The Swan 66FD is built in Jakobstad, Finland, or actually nearby in the lesser-known city of Kallby, where the facility also makes the Swan 42 and Swan 53. The newest part of the yard is churning out maxiboats, like the Swan 60, all the way up to the Swan 100, and plans are materializing for a Swan 130.

The fine craftsmanship for which Swan interiors are famous happens at a third facility in Kronoby, also near Jakobstad. The cabinetry is handmade, every joint smooth and seamless. Such workmanship is evident in the main saloon, the staterooms, galley and navigation station. Samples of wood from each Swan yacht are stored at the factory so that exact replacements can be fashioned if needed, Quarterman said. The bulkheads are teak, the sole bamboo.

Plenty of sensible thought went into designing the deck seating. Cushioned settees face one another amidships, with a table running lengthwise. The forward dodger can be raised to shield these passengers should the weather turn sour. The layout makes it easy to socialize, especially when anchored or at the dock.

A second retractable dodger mounted farther aft protects the cockpit, as does a sun tent mounted on the boom. The Swan's beauty and efficiency continues belowdecks, where warm woods add to the overall feel of elegance. The galley, navigation station and table for six are integrated into the main cabin. Again, it's designed for socializing, so the cook isn't hidden behind a galley bulkhead.

Because Lionessa is owned by two Finnish couples, a bulkhead was added to the master stateroom. This particular boat also has an extra fuel tank created by sacrificing a water tank. "You don't need another water tank because the boat has a watermaker and an icemaker," Foster said, noting the latter is worth its weight in gold when sailing in warmer climates like the Mediterranean or the Caribbean, where ice can be used for trading. 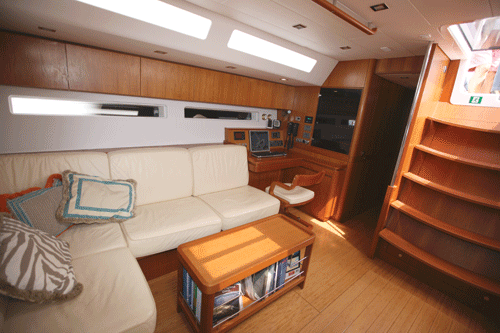 Lionessa also sports a dishwasher and a clothes washer. The heads offer push-button operation and gaining access to the engine and generator is as simple as lifting the hinged companionway steps. The boat has a 24-volt electrical system with an inverter to reduce current strength for appliance use.

On the day of our sail we avoided the region's many lobster pot buoys, but there was little cause for alarm because, unlike a torpedo-shaped keel, the Swan's is L-shaped, decreasing the odds of getting snagged. Had the wind piped up dramatically, we could have reefed the full-battened mainsail, aided by blocks attached to the leading edge of the sail. Reducing sail area on the genoa requires little more than keeping watch on a series of large dots on the sailcloth, indicating how much sail is furled. But we didn't need to do either, nor would we need the windlass or the anchor stowed neatly in a flush locker at the bow. We would, however, hoist the big red genniker emblazoned with a yellow lioness, the sight of which brought a cheer from both crew and passengers. According to Quarterman, it's not uncommon for Lionessa to reach speeds of 12 knots or more.

Returning to the dock was simplified by lazy jacks that guided the mainsail into the long tray fitted to the topside of the boom.

"Very neat that way," Quearterman said. "Once the sail is in place, I simply flake it from the end and that's it."

With fenders deployed and a nudge from the bow thruster we were at the dock in no time and, unfortunately, back ashore.