Home . Articles . News . Features . The secrets of the phantom fleet

The secrets of the phantom fleet

A group of sailing friends knows the best anchorages on Lake Champlain, but they're not telling 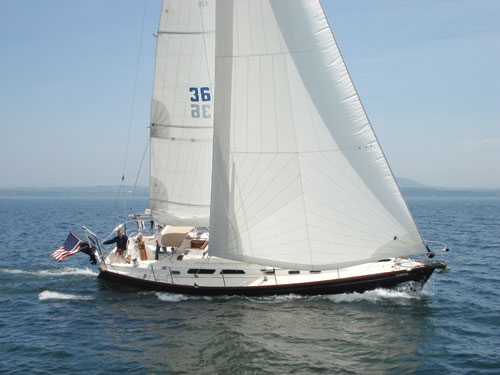 The first daily order of business for the skippers and crew of the Phantom Fleet is to decide where to anchor for the night and on whose boat to share cocktails-not necessarily in that order. The fleet consists of a group of good friends who sail five boats ranging from 36 to 42 feet on Lake Champlain. Our main goal is to discover new anchorages away from the madding crowd. The lake is tucked between the Green Mountains of Vermont and the Adirondacks of New York, where the funnel effect of the mountains offers some lively sailing. But as this beautiful lake becomes increasingly popular, quiet anchorages become more difficult to find, forcing us to become a little more creative in our choices.

Our method for finding new anchorages is simple. We look at our charts and pick spots that have no names and offer minimal protection at best and will be tenable as long as the wind doesn't shift. A steady wind is not something one can always rely upon on Lake Champlain, since the weather can change pretty quickly between these two competing mountain ranges, and often around 3 a.m. However, if the weather does hold, these anchorages, being so exposed to the open lake, can offer magnificent views of sunrises and sunsets. It has happened more than once that we've been forced to move in the middle of the night, but that's the price of beauty and peace. Besides, there's a sense of satisfaction that comes with a successful night crossing to a more secure anchorage, and it makes for a better story the next evening. Some nights have been uncomfortable, but not quite to the point where we were willing to get out of our cozy cabins to deal with ground tackle and sails in the dark. Those nights we just laid awake hoping that things would settle down, and if they didn't, the next day when we have had a stiff breeze for a rowdy sail.

Before committing ourselves to a new anchorage, we usually explore the likely candidate on a calm day from our dinghies, using a boat hook to check the actual depth. We poke around, looking for rocks that might not be on the chart, then choose points of reference on shore to mark our anchorage. It's surprising how deceiving a place can look on a chart, where once we've entered it we would find it offered more protection than it appeared from the outside.

Another advantage of anchoring with friends is that we can all agree on the amount of ground tackle for the job. We all have good anchors and plenty of chain and generally use the same amount of scope. In some of the more popular anchorages we have often seen boaters just drop their hooks to the bottom, figuring they're fine for the night, and then along comes someone who anchors near them with enough scope for a hurricane. When the wind dies during the night and all the boats start wandering around pointing every which way, the bumps in the night are inevitable. When we go to sleep, we are pretty confident that the boats in our fleet will stay put.

While many cruisers are forced to anchor early in the day to ensure their spot in the popular anchorages, the Phantom Fleet waits until later in the day to avoid detection from other cruisers who might think that we are in a legitimate anchorage. Secrecy is important to protect our destinations. Sometimes we leave our slips at Willsboro Bay Marina under the cover of darkness to avoid having to tell anyone where we might be going. On weekends we generally start out on Friday nights to get an extra morning at anchor. When we return on Sunday, we are all sworn to vagueness when asked by our dock neighbors where we spent the weekend. We have all become quite adept at describing the place in general terms, and it helps to point in the opposite direction when describing where we've been. However, we avoid outright lying about being in a certain anchorage where there is a chance that our neighbor might have been there. It can be quite embarrassing. "Oh, we were there, too. We didn't see you," I have heard. "Maybe it was because there were so many others boats," I might respond, red faced.

If we need to choose a new destination over the radio as conditions change underway, we use names we've created. The boat that makes the initial call raises the Phantom Fleet, so as to include everyone in the call, then suggests a place like Cold Water Bay, The Nest, Thunder Bay, Ernesto's Bay or Shotgun just to name a few. The names we picked all have meaning to us, relating to some event. Like "Ernesto's Bay," where we sought refuge from the remnants of Hurricane Ernesto that hit Lake Champlain on Labor Day Weekend 2006. We were perfectly located for the unusual southeast wind forecast for that night and enjoyed dancing under the glow of a full moon that appeared magically through a break in the clouds around midnight, casting sparkles on the water around us. Perhaps it was the eye of the storm. Names like "Cold Water Bay" are pretty obvious but never mind how "Shotgun" got its name.

We all remain on the same working VHF channel, and we often hear different groups calling each other. There must be times when we discuss anchorages over the radio, leaving other skippers to scratch their heads as they pour over their charts in search of these elusive hideaways. We once heard other cruisers asking each other where "Pi-R-Squared" is.

Some of our secret anchorages are great bass fishing spots, and Tom, Lee and Fred often head out in their dinghies at daybreak, midst the lonely cries of loons, to provide fine dinners for our fleet. However, sometimes they go "fishing" and sometimes they go "catching," and they can't always be relied on for our next meal.

Cocktail hour in the Phantom fleet is an event unto its own and is usually accompanied by enough snacks to make dinner an optional choice. It's a welcome opportunity for good friends to get together, compare notes about our past week's experiences and talk about the great sail we had getting to our anchorage. Somehow, as long as there is any wind at all, they are all great sails, with no two voyages alike. The Phantom Fleet is made up of experienced sailors who are able to squeeze the most pleasure out of every trip. My wife, Lee, and I have been sailing on Lake Champlain since 1976 and our Beneteau 393 Lyra is our fourth boat.

Getting from one anchorage to the next never involves racing. We are all strictly very civilized cruisers and not the least bit competitive. It was completely coincidental that we all bought feathering props one year. (If we had at least admitted it to each other, we could probably have bought them all together and gotten a great deal.) And the fact that some of us spend our winter months in physical therapy to recover from injured elbows from grinding winches doesn't mean we race. When I tore two headsails in the same day it had nothing to do with trying to go faster in very rough conditions. It's all about camaraderie, nothing more.

Two of our skippers are wine aficionados and are always most welcome at our evening gatherings. Rolland and George have wonderful collections, filled with bottles that always include mature vintages that need to be opened quickly lest they turn into very expensive vinegar. The rest of us are more than happy to help them. These are times when plastic wine glasses will simply not do. When waiting an hour for an uncorked bottle to breath properly is not an option; I've seen some very creative methods used to speed the aeration process. If the folks at Châteaux Petrus or Margaux could see their wine being poured back and forth between two coffee cups to air it, they would probably stop exporting to the United States. Having our own private anchorages together with wonderful friends is a special occasion, one worth celebrating. A decent sunset or a starry night seems to beg for a bottle or two of champagne. It's only civilized.