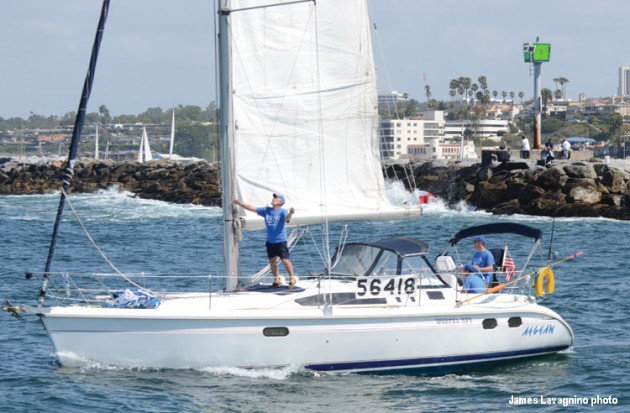 Four sailors racing in the annual Newport to Ensenada Race were killed off the California coast in the early hours of April 28. The tragedy came just two weeks after five sailors died off San Francisco when their boat was hit by a rogue wave and driven onto the rocky shore of the Farallon Islands.

In the Ensenada Race shipwreck, the bodies of three members of the crew of the Hunter 376 Aegean, William Johnson Jr., 57, of Torrance, California; Joseph Stewart, 64, of Bradenton, Florida; and Kevin Rudolph, 53, of Manhattan Beach, California were recovered. Skipper Theo Mavromatis, 49, of Redondo Beach, California, was still missing at press time, and presumed dead.

The fatalities were the first in the 65-year history of the popular 125-nautical-mile race from Newport Beach, California, to
Ensenada, Mexico, organized by Newport Ocean Sailing Association. 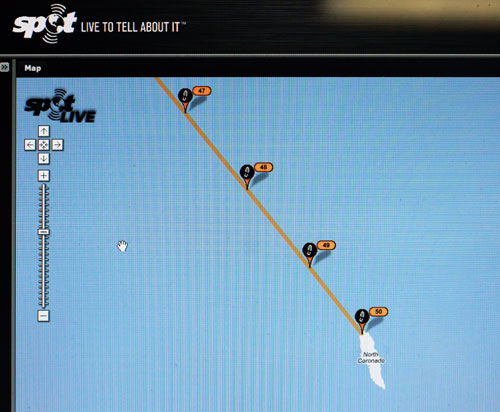 "I was in shock when I got the information," said Chuck Iverson, commodore of NOSA. "Our first realization was a call from the wife of the owner around 8:30 Saturday morning saying the boat's tracking devise had stopped at 1:20 a.m." But even as NOSA officials were contacting the U.S. Coast Guard, indications of the tragedy were unfolding at sea.

Conditions had been mild with winds in the 7- to 12-knot range and 8-foot ocean swells when the fleet started off Newport Beach's Balboa Pier midday Friday April 27. But the breeze had dropped substantially after dusk, with other boats in the vicinity reporting just 2 to 3 knots of wind late that night.

The Hunter 376's automatic tracking device showed slow progress until just off the coast of San Diego when it seemed to indicate the engine had been turned on, which is allowable in the cruising division with a time penalty. The boat's track showed a brisk pace starting at around 10 p.m. averaging 7.2 knots. From that point on until the tracking device stopped transmitting following its 1:36 a.m. scheduled report, the track shows the yacht made a steady heading directly to the rocky shore of North Coronado Island. The Coronado Islands, seven miles offshore and just south of the U.S.-Mexico border, lie directly on the rhumbline for the race course and provide a tactical challenge for competitors, who have to decide whether to pass east or west of the barren isles. 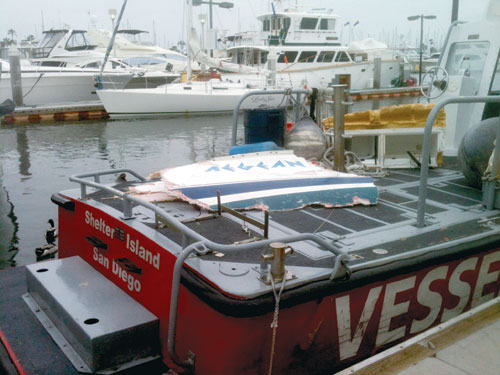 Aegean's speed would have been unlikely under sail in the light breeze, leading experts to determine the yacht was under power.
Aegean had been using a Spot Satellite Tracker device to automatically transmit its GPS location every 10 minutes.

Investigators were aware of Aegean's track colliding with the island, but had not searched the island as of press time.

"Initial search-and-rescue assets out there were not specifically looking for an impact area, and did not find any debris," Fitzgerald said. "We are looking at going out there again and doing more in depth examination. That is something we are looking into as one of the possibilities of what may have happened."

Meanwhile the Coast Guard continued to survey boaters in the vicinity about shipping and other hazards, saying it had not ruled out the possibility of a collision with a ship.

"But of all the scenarios, at this point it is potentially less likely," Fitzgerald said.

The first signs that something was amiss came at 7 a.m. when racers began sailing through a field of debris and brown foam near of the islands.

"We noticed hatch doors, cushions, chunks of plywood no bigger than one foot square and other debris, including unopened bags of potato chips drifting atop the big swells," said Rick Griffin, crew on the Hobie 33 Rolling in the Deep. "We thought maybe it was storm wash or flotsam from the Pacific Gyre. We had no idea."

Around 10 a.m. the Beneteau 35 Starckweather also sailed through debris.

"We had jibed back in toward the Coronados when we came across a large area of debris, and our initial thoughts were that it might be flotsam or from the Japan tsunami," said helmsman Russ West. "But when we saw an inflatable life jacketwe said 'This is a boat,' and immediately thought there might be people who needed our help. We called the Coast Guard, who sent the Mexican Navy," he said. "We had stopped racing and were just picking stuff out of
the water."

"The wood was just splintered apart," West said. "Whatever happened, it was massive."

At the same time, Eric Lamb of Vessel Assist, a longtime sponsor of the race, was shadowing the fleet to providing aid to the racers and sweep the course for stragglers. Lamb was off South Coronado Island when he spotted a part of a refrigerator compartment and a chunk of hull with a bootstripe and porthole in the water.
Lamb said he began following the debris trail north, and when he came upon a five-foot piece of transom with the name Aegean on it, he called the Coast Guard and another racer broke in to say there was a boat of that name in the race.

"We kind of picked up the pace at that point," Lamb said, and the boat began a search pattern for survivors.

A Mexican Navy gunboat and a U.S. Coast Guard helicopter joined the chase. The helicopter crew spotted bodies in the water. Vessel Assist recovered two bodies, one outfitted in foul weather gear and a harness. The Coast Guard recovered a third crewmember. None of the crew were found wearing life jackets. The bodies of Johnson, Stewart and Rudolph were transferred to a Coast Guard vessel and taken to San Diego.

The Coast Guard suspended the search for Mavromatis on April 29. The San Diego medical examiner ruled the cause of death for Johnson and Rudolph was blunt force injuries to the head and neck. The office said Stewart's cause of death was drowning.

In the 56-mile Full Crew Farallones Race April 14 when the Sydney 38 Low Speed Chase foundered while rounding the Farallon Islands. A rogue wave washed six of the eight crewmembers overboard, and a second wave flung the boat on the rocky shore.

Three sailors, owner James Bradford, and crewmembers Bryan Chong and Nick Vos, were airlifted from the islands. The bodies of Marc Kasanin and Jordan Fromm were recovered, but the bodies of Alexis Busch, Elmer Morrissey and Alan Cahill were still missing.

The deaths were the first in the history of the race run by the San Francisco Yacht Club.

Coast Guard officials in San Francisco temporarily halted offshore racing permits for two events after the incident, but Coast Guard Capt. Cynthia Stowe, sector commander for the port of San Francisco, said she expected the ban to be lifted by mid-May. Fitzgerald said he was not aware of discussions to do the same in Southern California.

US Sailing appointed an independent panel to review the Farallones race accident, and US Sailing President Gary Jobson said another panel will be formed to investigate the Newport-Ensenada race tragedy.

"I think it's important to put this in perspective," said Chuck Hawley, chairman of US Sailing's Safety at Sea committee. "In a given year approximately 700 die doing recreational boating and about 15 of those die on auxiliary sailboats. We are stunned to have two accidents two weeks apart, but it is exception and it does not represent a trend. It's not a change in seamanship or boat construction. I caution us not to think of this as the start of something new; it's actually an extraordinary coincidence."

Greta Schanen and Erin Schanen contributed to this story.