Home . Articles . News . Features . Sailing at the top of the world

Sailing at the top of the world

At 12,500 feet above sea level, Peru's Lake Titicaca draws a sailor and his daughter to cruise the world's highest navigable body of water 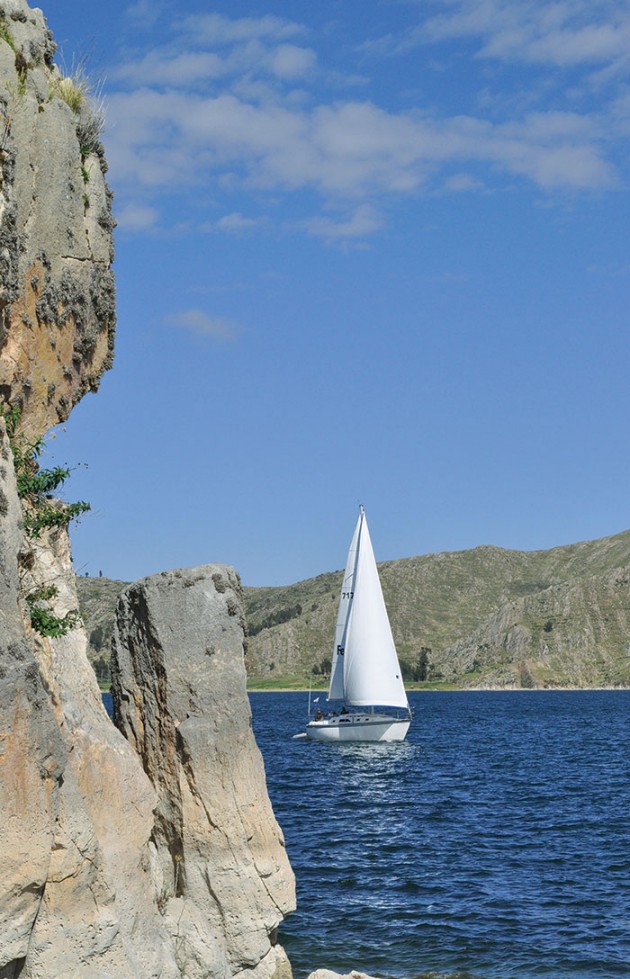 In January 1974, the legendary sailor and storyteller Tristan Jones slipped his 17-foot sailboat Sea Dart into the murky waters of Peru's Lake Titicaca. At 12,500 feet above sea level, it's the world's highest navigable body of water and it was the first time an oceangoing sailboat had plied the waters of South America's largest lake. Jones and his companion Quechua Indian Huanapaco would spend the next eight months cruising and mapping the 3,200 square miles of Titicaca. During that time the intrepid yachtsman helped an indigenous tribe tie its floating islands together with a 600-foot storm anchor line, was thrown into a Bolivian jail and was feted by former Nazi Kreigsmariners at the Bolivian Yacht Club in Huatajata.

In April 2011, my daughter Betsy and I went to Lake Titicaca in search of the Tristan Jones legend. We found that while much had changed in the ensuing years, much remained the same. We were fresh from a 50-mile hiking pilgrimage to the Lost City of the Incas, Machu Picchu. And while I had enjoyed watching the sun rise over this mystical city and poking around the ruins, it was this section of our father-daughter adventure that I had been looking forward to the most because, like Jones, I am a pretty fair storyteller and I felt in him a kindred spirit of wanderlust and daring-do.

Our first glimpse of this mythical lake, said to be the birthplace of the Inca civilization, came as our commuter plane descended onto the high Andean plateau known as the Altiplano Basin. With an average height of 12,300 feet, the Altiplano comprises the most extensive high plateau outside Tibet. Ringed by the Andes and Cordillera mountain ranges, this 600-mile-long plateau is home not only to Lake Titicaca, but also the Peruvian cities of Puno and Juliaca as well as the Bolivian city of La Paz. A series of active volcanoes ring the area.

The origin of the name Titicaca ("stone of the puma") is shrouded in mystery. Some say the name is derived from the fact that the shape of the lake when seen from the air resembles a puma chasing a rabbit. The lake is an impressive body of water. It measures 118 miles long and 50 miles wide, with more than 700 miles of shoreline. At 3,200 square miles, it is about half the size of Lake Ontario, and at its deepest, Lake Titicaca descends to 1,000 feet. Average water temperatures range from 50 to 57 degrees. Arctic blasts from the surrounding mountains can send the nighttime air temperature to well below freezing. Gale-force winds are not uncommon during the winter months.

After a bone-jarring 90-minute drive down roads with potholes big enough to devour our eight-passenger Land Rover-a drive made even more uncomfortable by our driver's constant swerving around huge boulders the local Indians had placed in the roadway as their way to "strike" against the Peruvian government-we emerged from our transport and were treated to a night sky so filled with brilliant stars we felt we were at the very rim of the universe. Directly overhead, the Milky Way seemed so close we could drink from its foam. To the south, the Southern Cross pointed the way to the mysteries of the lake that stretched as a black mass spreading to the horizon.

The next morning, I watched a spectacular sunrise as I sipped strong Peruvian coffee from the deck of our eight-room lodge perched within yards of the shimmering lake. The sun's strong rays were burning off the early-morning haze. My morning's observations echoed those written by Jones 40 years before:

"Sunbeams streamed through the rain clouds in golden shafts, illumining green, green island…as the clouds rolled apart, they revealed the bluest water in the world."

Our plan was to explore the lake by river barge as well as by sailboat. We had engaged the guide services of an Uros Indian, Armando Suana, who grew up on the floating reed islands that dot the lake. Armando would escort us to his reed-island home as well as to the 2.2-square mile "real" island of Taquile, located 25 miles east of the lake town of Puno. Jones had visited both of these places with Sea Dart.