This latest result of German engineering and Bruce Farr design is a fast, state-of-the-art cruiser 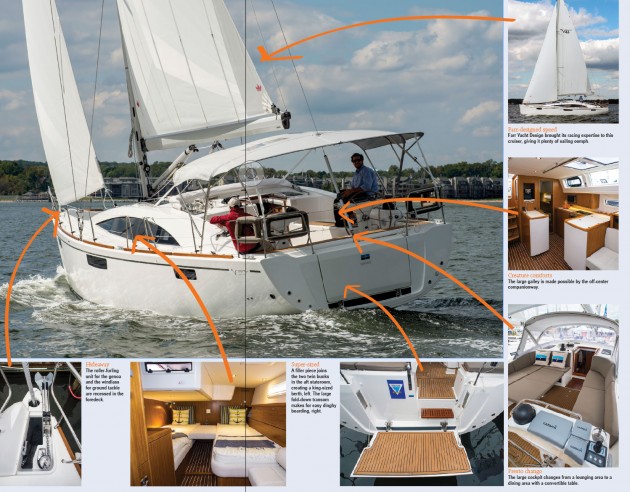 It was perfect weather to test sail the Farr-designed Bavaria Vision 46. A moderate breeze out of the northwest off Annapolis, Maryland, made for flat water, and the fact that it was a Wednesday in October meant that there was little other traffic on the Chesapeake Bay.

The few sailors who were nearby were treated to views of a handsome, long-waterline cruiser that flaunts a powerful look with an almost plumb bow, beam carried well aft, moderate sheer and a straight transom. The Vision 46 is clearly a modern boat, yet her gently curving cabintop adds grace to her lines and traditional yacht details such as varnished toerails lend a touch of elegance. 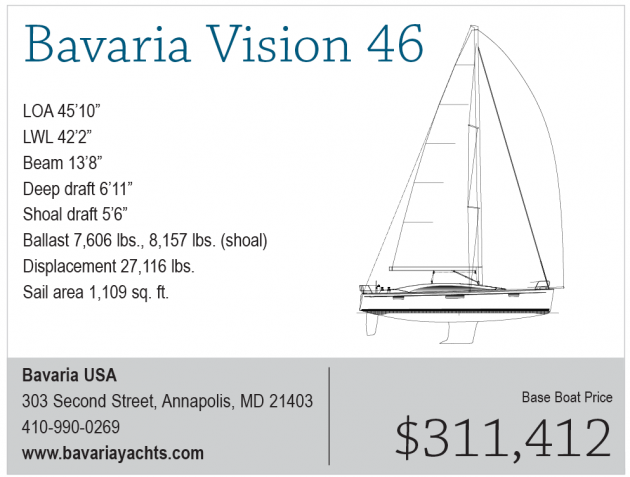 At the bow, the genoa furler is recessed, as are the anchor roller and windlass, making for an uncluttered foredeck. Looking aft, I counted 11 hatches that were seated flush with the cabintop, making the area inviting for sunbathing and relaxing. Wide side decks and shrouds mounted outboard make it easy to get around on deck, though the handrails on the cabintop could have extended farther forward to make the passage back to the cockpit a little safer.

The cockpit is commodious, but the real innovation is that the companionway is set to the right of center, allowing the port cockpit seat to extend athwartships along the back of the cabin to make an L-shaped seating area. In the middle is a table that can function as a cocktail table, unfold for dining or be electrically lowered to form a double daybed. Frankly, that would be my night bed too.

Another great feature in the cockpit is removable foot holds. These teak brackets attach quickly and securely to the cockpit sole and offer foot braces for the helmsperson and crew but can be stored away when at anchor to minimize toe catches. The cockpit sole, seats and swim platform on the test boat featured a faux teak product called DuraDeck. I was surprised how well it gripped my tired boat shoes.

The twin helm stations coupled with the fold-down swim platform make easy work of getting on and off the boat from a dinghy or when Med-moored. Further, the helms' outboard locations provide great sightlines and unobstructed views of wind and wave activity to weather.

Stowage on deck is excellent. From the forward anchor locker, which was very large and could easily store a reacher or roll-up inflatable, to the stowage under the starboard seat and the immense area between the helm stations, you will be hard pressed to find a boat with more deck stowage capacity. With only one aft stateroom to port, the starboard locker is cavernous. It was smartly sectioned off to avoid looking like a catchall and even included a dedicated place to stow a life raft.

Down below
Access below is through the offset companionway and over a minimal threshold. The companionway stairs are well secured and there are adequate handholds on both sides, making it a safe entrance even when heeled. Many new boats feature companionways that are more like grand staircases, which aren't as safe if you intend to go offshore.

A spacious, well-ventilated head with a separate shower stall is to starboard of the companionway, perfectly located as a place to remove soaked foulies after a wet watch or to shower after a swim. Aft of the shower there is access to the cockpit locker and a large hanging locker. Bavaria has clearly listened to sailors and maximized stowage on the Vision 46.

The portside galley features a centerline sink, which will drain no matter what tack you are on, a top and front loading refrigerator, built-in microwave and optional three-burner propane stove with oven. The galley space between the sink and counter is secure and functional, and the close proximity to the companionway, hatches and an opening port ensure that the cook will have good ventilation. The three drawers aft of the stove display fine joinerwork and are deep and well constructed with sliding hardware as nice as you will find in a high-end kitchen ashore.

Behind the galley and down a single 8-inch step is the aft stateroom. It is configured as two single bunks running fore and aft, but there is a filler that turns it into a king-sized berth. The single bunks are a good size and with lee cloths would make excellent sea berths, a nice option to a cavernous bunk that forces you to lie athwartships when the boat is significantly heeled. In the main cabin there is an L-shaped dinette to starboard and a settee to port. The settee is in three sections-the middle section can be lifted to form a nav table, and the front section can be moved over to the dinette table to add space to seat a large group-a clever arrangement.

The forward cabin has a center island berth and a head. The theme of generous stowage was evident, including a handy bookshelf. All in all, it looked like a comfortable cabin.

Under sail
To get underway, we had to maneuver out of a very tight dock space, but the Bavaria Docking Control System made short work of it. The system, a $25,000 option, consists of two drop-down thrusters fore and aft and joystick control. With it, the boat will do 360s in its length and can easily move sideways into a breeze. Such systems are popular on new performance cruisers and allow owners to buy a boat with the waterline length they want without the fear of docking drama.

After an engine test in which the boat's saildrive pushed the boat at 6.5 knots at 2,000 rpm and 8.1 knots at 2,600 rpm in flat water, it was finally time to see how the Farr design would perform under sail. The standard mast is a Selden in-mast furler; our boat was equipped with a main with vertical battens. Control lines are led aft where there are two electric primary winches as well as an electric winch on the cabintop for halyards and the outhaul. Keeping the boat on a slight starboard tack to make the unfurling angle easier, we used the outhaul winch to unfurl the mainsail. Despite the relatively low-aspect ratio of the mast, I was pleased with the size of the main and how the boat accelerated. Mind you, at 27,000 pounds she didn't leap out of the water, but the large, powerful main provides plenty of drive.

The mainsheet design took a little getting used to. To keep the cockpit open, there is no traveler on the Vision 46. The mid-boom mainsheet is double-ended terminating at the primary winches just in front of the helms. Tacking the main was not hard and we got good at it with some practice.
Upwind, the boat performed very well in wind speeds ranging from 12 knots to the high teens. Hard on the wind, we consistently sailed at speeds in the high 7s and hit 8 knots once or twice. The wheel felt steady with a comfortable touch of weather helm, and in the big puffs the Vision 46 would dip her shoulder a little and accelerate. While we never got the rail in the water even with gusts near 20 knots and a full rig, a cruising family would probably want to roll in a little main to flatten out the boat. We had big smiles on our faces as we tacked back toward Annapolis.

Tacking the boat, I noticed another benefit to the wide cockpit with the offset companionway. On other twin-wheel boats I have sailed, the cockpit table is an obstacle to crossing the cockpit to trim the jib on a new tack. But on the Vision 46, there is plenty of space in front of the helms to move from side to side because the table folds into a compact square.

That is just one of many well-thought-out details that add to the appeal of the Vision 46 as a fast cruiser with state-of-the-art systems and highly functional accommodations wrapped in style and luxury.