The Bay of plenty 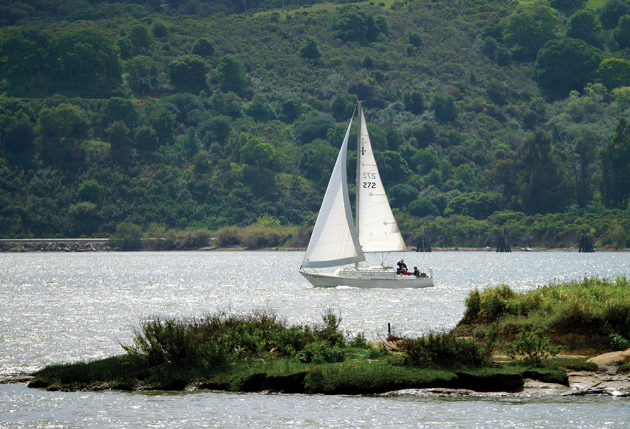 In less than a week we had discovered an unspoiled gem just outside the city, revisited a true sailor's yacht club full of fond memories, steered a Cup boat across deep blue waters, made our own wine and reveled in some of the best sailing conditions in the world. And we had only just scratched the surface of the delights of San Francisco Bay.

San Francisco is one of the most iconic cities of the world. More than 16 million visitors come each year to see its precipitous streets, clanging cable cars, the Golden Gate Bridge and other sights. The one-of-a-kind vibe of the City by the Bay is only heightened this year with the arrival of the America's Cup regatta. If San Francisco wasn't on your bucket list before, it should be now. What better way to explore than on the water? With several reserve days on the AC race schedule, sailors can tuck in a day of cruising here and there, or do as we did, spend a whole glorious week discovering one of the greatest sailing venues on Earth.

SAILING photographer Bob Grieser, his wife Georgia and I were joined by our friend and sailboat racing enthusiast Joel Arenson for our adventure, which began north of the Golden Gate Bridge in Sausalito. Its trendy downtown curls along the waterfront, a bustling boulevard with a blend of shops and restaurants for all tastes and budgets. Beyond, creaky wooden docks are chock full of boats old and new.

This was where Bob ran into Ron MacAnnan as he was exiting his 1949 Chevy pickup truck that he bought upon returning from service in World War II. "I'm an old man, with an old house, old car, old boat and a young wife," Ron said. He led us to the majestic M-Class yacht Pursuit, telling us he's owned it 53 years and does most of the maintenance himself. It's an 82-foot mahogany-hulled cutter, built in 1929 and four years younger than Ron himself.

"No one does the work the way I like it," he said, and shuffled off to his chores.

Our boat had less history but all the amenities required, including (thankfully) heat. On our first night the temperature plummeted. Rain drilled at the hatches, the wind howled, and the boat tugged at her docklines. But we were warm and dry in our tidy Sunsail F40, a racer-cruiser set up for chartering. Besides a full complement of performance electronics and instruments, it had three double cabins, a full galley, spacious head and hot water heater. "Awfully cozy, for a race boat," I thought, as I snuggled beneath a mountain of bunny-soft blankets for the night.

Our first destination was nearby Angel Island, a dome of land roughly one mile square. Guests tie up at the dock on a first-come, first-served basis, and there are also moorings for overnighting. Used as an immigration station in the early 1900s, it is now a national park. It was hard to believe this oasis of natural beauty and calm was just three miles from the hubbub of San Francisco. A tram took us up and around the 400-foot summit through dense forest, with the sweet spice of eucalyptus and pine blending with the sea breeze. An uninterrupted view of the America's Cup race course could be seen from several of the bluffs, where the park service will be setting up bleachers during the event.

We warmed up with a cup of soup at the Cantina before heading out on the bay. An average day here promises westerlies of 10 to 20 knots, and the current can add a kick too. But conditions were perfect for our reach to Alameda Island, roughly 10 miles to the southeast.

Alameda is home to two of the Cup syndicates, and chances were good we might rub elbows with some sailors at the 1400 Bar & Grill, or WesCafe. Plus, the Artemis crew has an honorary membership at Encinal Yacht Club, which was where we were headed.

Fifteen years ago, after a particularly snotty passage from Los Angeles to San Francisco on a large race boat, I had been dropped off at the doorstep of Encinal Y.C., awaiting a ride to the airport from a friend. Direct from a four-day delivery, I was dressed head to toe in fleece, with a large duffel in one arm and rolled-up sleeping bag in the other. As I rummaged for ID, and apologized for my feral appearance, the manager came out from behind the counter, took my bags and led me upstairs.

"The bar isn't open yet, but sit here and I'll bring you a bloody mary," he said. "Stay as long as you need; enjoy the view."

It was the epitome of what a yacht club should be-a place where weary, bedraggled sailors were welcomed after a long voyage. And so I was happy to see that 15 years later the club's hospitality was as warm as I remembered. Greeted by the staff and supplied with all the appropriate keys, we nestled into a corner of the U-shaped guest dock, and were quickly plugged in with tanks topped off.

What a difference a day made. The night was so balmy, we hosted a soiree in the cockpit of our boat. Georgia set up snacks on the hatch as several long-lost friends arrived. Our happy hour extended into the night, and ended with a midnight swim in the pool. As a result, the following morning began slowly.

Departing through Oakland's inner harbor, we hoisted our sails and cut across to McCovey Cove, where the San Francisco Giants were slaughtering the Colorado Rockies. We could hear the crowd roaring even before we reached AT&T stadium, with its giant bubble-gum machine of colorful bodies popping up and down. On the waterfront, paddleboarders slipped between the anchored boats where fans listened to the game on the radio and barbecued.

But we had bigger fish to fry-literally. We were on our way to Fisherman's Wharf. Cruising beneath the Bay Bridge along the shoreline, the iconic sights of San Francisco unfolded before us. From the Ferry Building to Crissy Field, the waterfront is a five mile spectacle, including the new America's Cup Center at Pier 27, an enormous metal and glass structure, with expansive viewing and grounds.

We took a slip at Pier 39, a full-service marina smack-dab in the middle of the Cup action. The circus-like atmosphere along the waterfront provided a feast for all the senses, as we heard dialects from around the world, watched old salts put away their Monterey Clipper fishing boats and inhaled the inviting aromas of seafood restaurants, chocolatiers and the Boudin bakery.

The next morning we set out not on our boat, but on USA76, a vintage 2002 IACC race yacht. Oracle bowman Brad Webb and business partner Troy Sears brought this 85-foot black carbon beauty to the bay and launched ACSailingSF two years ago, giving mere mortals like us a chance to go out and play like the pros.

As we boarded, skipper Jonathan Buser explained that USA76 was the most modern generation of AC boat available to the public, built under the IACC rule in effect from 1992 to 2007. She's undergone a few modifications since, including reducing the size of the mainsail and the keel bulb, and adding a set of high handrails in the aft cockpit. Other than that, she was a lean, mean racing machine.

It required all the guests, taking turns on the coffee grinders, to hoist the 1,750-square foot mainsail up the 115-foot mast. After the jib was hoisted we were suddenly rocketing across the water. We spent the following two hours effortlessly banging the corners of San Francisco Bay, each of us taking a crack at the helm. Joel was a natural, and even photographer Bobby G. put down his camera to drive for a while.

It was a taste of this splendor that whet Larry Ellison's appetite for the Cup. USA76 won 21 of 33 races during the Louis Vuitton challenger series in 2003, but couldn't defeat Team Alinghi, which went on to beat Team New Zealand that year. After a successful defense in Spain in 2007, Alinghi lost to BMW Oracle in 2010, setting the stage for AC34 in San Francisco Bay.

As if the day couldn't get better, when we departed Pier 39 we discovered the 72-foot Cup catamarans Artemis and Oracle on the horizon. Joel hurried us into position but there was no way we could catch them, and we were forced to watch them zoom by. Then we beat across the green-blue water to the foot of Alcatraz Island, originally a fort and later the notorious prison known as The Rock. On the way back, we skimmed by the piers and Marina Green, where America's Cup Park and Village will be set up this summer.

What would a trip to San Francisco be without a visit to wine country? Just 40 miles northeast of the city is Napa Valley, "the official wine region of the 34th America's Cup." After the prior spirited day of sailing, we decided to relax, tuck the boat into Sausalito and venture to Judd's Hill for a wine blending course.

Sound stuffy? Au contraire, it was a blast. Proprietor Judd Finkelstein grew up in the wine country "stomping grapes since the moment I could stand," he joked, but wanted to see what else the world had to offer.

"Working in the film industry gave me a whole new appreciation of the wine industry," he said, and although he returned to his vineyard roots, his knack for showmanship remained strong.

We spent the better part of the morning making wine.

"Blending is where you put the magic together," Finkelstein said. So we blended, and re-blended, measuring and mixing like mad scientists while he entertained us. I hadn't anticipated the competitive nature of our exercise, but as sailboat racers it's in our blood. So when we did our final blind tasting, I was reticent to admit: Joel's wine was the best. The team concurred, and we proceeded to siphon the varietals in appropriate increments from the barrels to bottle and label it. As a nod to our weeklong adventure exploring the AC venue, we named it "Cup Run." And our cup runneth over indeed.

At this point, food became mandatory, fortunately fine cuisine abounds in Napa. We enjoyed a spectacular lunch at Auberge du Soleil, overlooking the rolling vineyards, before swinging by downtown Napa to meet some friends at The Thomas. A popular nightspot in the 1960s, it closed and remained untouched for nearly four decades until it reopened last year under new owners. We liked the groovy music mix, the classy retro decor and the non-alcoholic drinks the bartender served up: lavender lemonade, cucumber thyme fizz and spiced iced tea. Joel hobnobbed with the international crowd that trickled in for happy hour, until all were refreshed and we hit the road for the marina.

San Francisco Bay covers 488 square miles, and we barely skimmed the surface. In addition to the 20 miles of bay to the south, to the north past the Richmond Bridge is San Pablo Bay, with its sunny China Camp anchorage and the funky town of Benicia (where Jack London flip-flopped from poacher, to deputy); and the Delta river cruising area just beyond. So we cracked open a bottle of Cup Run and plotted our return.