A midsize racer-cruiser that is the best of both worlds 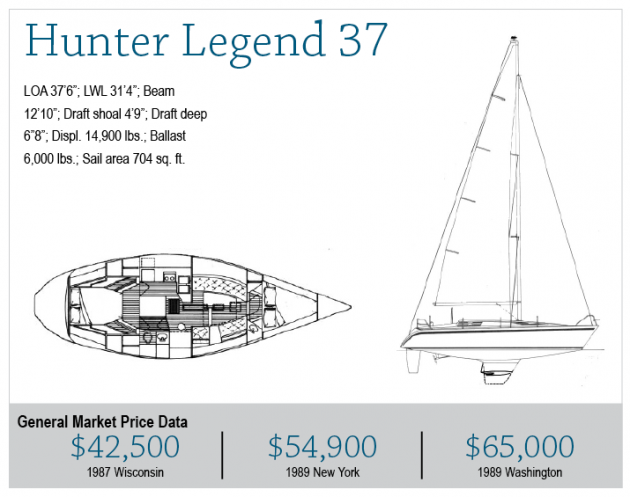 Hunter Marine was launched in 1972 by Warren Luhrs, with many early cruising models designed by John Cherubini. By the 1990s, an inhouse team was responsible for most of the design work, which included the Bergstrom & Ridder rig with swept spreaders. The Hunter Legend 37 was launched just prior to the company's move to its trademark arch for the mainsheet traveler, with a production run from 1986 to 1988.

The 37 doesn't look like a cruising boat despite its many amenities belowdecks. The sleek, uncluttered foredeck, reverse transom and a nearly 60-foot-tall mast combine to give this sloop a sleek profile. The cockpit with pedestal steering and large destroyer wheel is roomy enough for six.

Naval Architect and SAILING Magazine's Technical Editor Robert Perry noted in his review in 1986 that the 37 has the appearance of a high-performance boat, with a nod to Swan for introducing yachts with lowered coachroofs that seamlessly blend into the foredeck. Aboard the Hunter Legend 37, this attention to detail helps reduce the visual impact of its substantial freeboard.

Despite comments from traditionalists that boats of the mid-1980s resemble Clorox bottles in style and strength, the Hunter Legend 37 has proved an exception. It features a solid fiberglass hull, balsa-cored deck, Bergstrom & Ridder fractional rig with swept spreaders, balanced spade rudder and two keel options: a deep fin or a shoal-draft bulb with wings. Longitudinal stringers installed in the hull midsection to each side of the keel provide additional structural support. And although there isn't much teak or mahogany on deck, the interior is graced with a mix of exotic woods.

With a balsa-cored deck, delamination from water infiltration is always a possibility. Check for stress cracks near stanchions, chainplates and other deck fittings. Make certain cabintop handrails are through-bolted because some owners have claimed the attachment was made with screws that pulled out. Problems with the Edson steering system have been reported, so inspect the chain-to-wire setup, the pulleys and quadrant. The aluminum fuel tank has been known to corrode.

Sailboats with style often sacrifice functionality, but here again the Hunter Legend 37 succeeds with a sculpted cockpit that provides room for six, albeit the space behind the helm is tight. Many owners have removed the arched bench behind the wheel.

With a 59-foot, fractional rig and swept spreaders, it's easy to see this boat could be a speedster in capable hands. The rig can carry a big main, its power kept under control in 25 knots of wind using only the backstay, cunningham and boom vang. The wide sidedecks are welcomed by sailors sent to work the foredeck.

Roomy and comfortable are the key words belowdecks. The U-shaped galley to port features a two-basin stainless steel sink, top-loading refrigerator, a two- or three-burner stove with oven, adequate storage, counter space and lots of small drawers. The saloon has a drop-leaf table and a circular seating pattern that encourages socializing, with settees to each side that can be used as single berths. Headroom is 6 feet 3 inches in the saloon and the boat carries 72 gallons of freshwater.

A navigator's station to starboard has a hinged desk drawer and various storage compartments. The aft berth, located beneath the cockpit, has a pedestal queen bed that can be reached from either side through the cabin door or the head. The arrangement eliminates having to disturb the other person, but the ceiling is low.

"It's like a real bed instead of having to climb over somebody," said David Alves, owner of the shoal-draft model Progeny in South Dartmouth, Massachusetts.

The forward V-berth cabin sleeps two, has a hanging locker and a vanity sink with mirror. Some owners have removed the sink to increase storage.

"The separate cabins are perfect for two couples," said Alves. "There's one shared head that also becomes a shower. The head can be accessed from the aft cabin and from the saloon. The plumbing is simple. You stick a hose on a fitting on the back of the door, then stand and shower."

The teak-and-holly sole gives the interior a warm glow while flush-mounted deck skylights allow natural light to enter the cabin.

The Hunter Legend 37 is equipped with a 34-horsepower Yanmar 3HM35F diesel fitted with a two-bladed propeller. The engine is fed by a 33-gallon aluminum fuel tank installed under the aft berth where access is easy. The sides of the engine can be accessed from twin side doors or the larger front opening, but servicing the top is a bit more difficult due to tight clearance. Owners report the freshwater-cooled engine is capable of pushing the boat along at 7 knots while cranking 2,800 rpm on the tachometer. Although some pre-owned Legend 37s are advertised with 27-horsepower or 35-horsepower engines, most are factory-fitted with the 34-horsepower Yanmar.

Fast is the most frequently heard word from the mouths of owners when describing the boat's sailing characteristics. It seems generally agreed that the boat performs remarkably in light air, perhaps due to the high sail area-to-displacement ratio.

"The boat has a huge main and that's where the power is," Alves said. "I use a 110% jib on an above-deck Harken furler that was installed by the previous owner. The original furler was flush with the deck. Changing over freed up the anchor locker."

Alves said the boat sails well up wind even though it's a wing keel with bulb, which seemingly would lack the upwind performance of a deep fin keel and be subject to more vibration as it moves through the water.

Steve Royall, who sails his Legend 37 Gone Tomorrow out of Marina del Rey, California, said the boat is fast in light air and when reefed correctly performs admirably in heavy wind.

"When we have Wednesday night races, I chase people down just to show them I can," he said. "It's a fast boat. And it really points."

Royall recommends a 155% genoa in light air and a 135% when bigger breezes are forecast.

"It sails like a dream. I can get 8.5 knots out of it, which is faster than hull speed," he said.

The Hunter Legend 37 is both racer and cruiser in the truest sense of that sailing hybrid, capable of winning in club competition or providing luxury and comfort on a weeklong cruise. Its racer profile will turn heads while its belowdecks accommodations are likely to encourage friends less interested in competition to stay aboard a bit longer. This boat is equally at home in both worlds.