During the late 1980s, recreational sailors began searching for cruising boats that were easy to handle and loaded with liveaboard comforts. Hunter Marine Corp. answered the call with several models, including the popular Hunter Passage 42.

The boat was envisioned by aerospace engineer, industrial designer and architect Warren Luhrs, who founded Hunter Marine Corp. Luhrs began building Sea Skiff boats in the 1970s with his father, Henry, and brother, John. Their first sailboat, a 25-footer designed by John Cherubini, was launched in 1973. 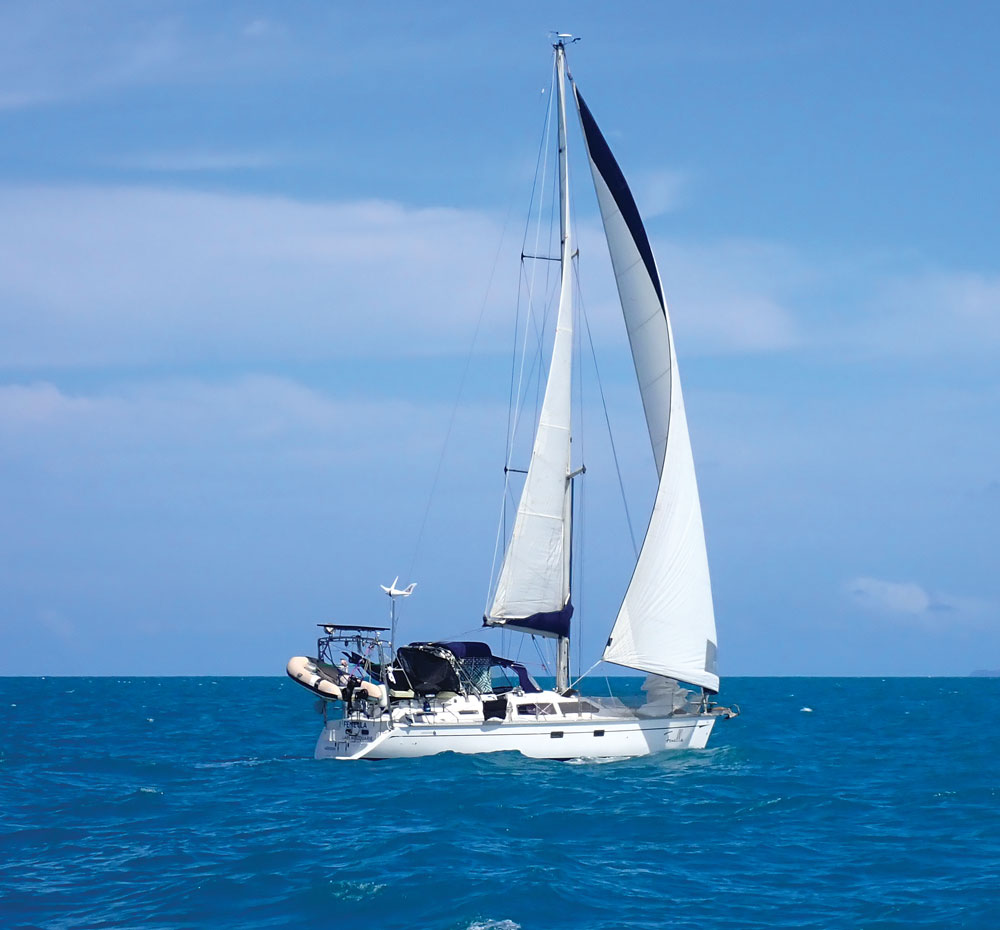 Luhrs was assisted by the Hunter Design Team in creating the Hunter Passage 42. The first hull came off the production line in 1989 at the company’s plant in Alachua, Florida. The last of these fiberglass, center-cockpit keelboats was launched in 1998. The model has remained in demand, mostly by those who consider it among the best boats ever made by Hunter.

Designed for recreational use, the Hunter Passage 42 features spacious sleeping quarters for four with fore and aft staterooms. Accommodations can be increased to six or more with the settee and dining table in the saloon that convert into a double berth. The cockpit, though not overly spacious, is ideal for socializing and protected from the weather by high sides, a dodger and bimini. The side decks are wide for safe and efficient movement of the crew. The stern boasts a walkthrough transom, swim platform, and a boarding ladder that folds. Foodies tend to gravitate to the well-equipped galley. And when time comes to service the engine, gaining access isn’t a challenge.

The Hunter Passage 42, sometimes referred to as the 42CC, shouldn’t be confused with another 42-footer from Marlow-Hunter, the company which took over from Hunter Marine Corp. The Marlow-Hunter 42SS was launched in 2016.

The Hunter Passage 42 is loaded with features both above and below deck. There’s no ignoring the trademark Hunter arch, which towers above the cockpit where the mainsheet and traveler are securely fastened and out of the way.  The boat has a masthead rig, 60-foot mast, a raked stem and wheel steering. There are fixed and opening windows and portals aplenty.  Roller furling with a 130-percent genoa, inner stays, stainless stanchions, lifelines, bow pulpit and stern rail seats all add to the boat’s ability to satisfy a wide range of customer preferences.

The overall design provides a center cockpit that helps keep captain and crew warm and dry.  It’s easy to envision the crew sunbathing on the spacious flat surface, dubbed the “sun lounge,” located on the deck directly above the aft stateroom, or taking advantage of the walk-through on the reverse transom that leads to the swim platform.

There’s a dazzling amount of open space below, made possible by the boat’s 14-foot beam and 6-foot, 6-inch headroom, so much so that a review published shortly after the boat was introduced at the Annapolis Boat Show in 1989 described it as “voluminous.”

The Hunter Passage 42 has proven itself a well-made boat over the past three decades, though certainly not as rugged nor of the quality found in boats such as those from high-end bluewater boatbuilders.

According to Hunter Marine brochures from 1990, the Passage 42 is made primarily from fiberglass. Its maximum strength is achieved via a bonded, full-length internal frame and stringer system to stiffen the hull without adding weight. The trademark Hunter arch above the cockpit is made of structural stainless steel, strong enough to support the mainsheet and traveler.

The  boat has an internally mounted spade rudder and bulbed-wing keel.

Serious complaints and recalls related to the Hunter Passage 42 have been few and far between. Owners have reported leaky chain lockers, minor electrical problems, and difficulties with some of the appliances, but most of these issues were resolved by Hunter Marine.

The oldest Hunter Passage 42 will be more than 30 years old this year, which means a marine survey could prove beneficial. Otherwise, a close inspection of deck and rigging should be undertaken.

Eyes tend to focus on the center cockpit, which dominates the deck. The cockpit is sculpted for comfort and protected from the elements. The Hunter arch keeps the cockpit uncluttered by providing a location for the mainsheet and traveler. The steering wheel and binnacle-mounted compass are enhanced by an array of electronic instruments displayed on a panel, providing the helmsman with full data.

Two self-tailing winches simplify sail handling, as does the roller-furling headsail. An anchor roller on the stem guides chain into a locker, the task made less strenuous by an electric windlass.

Portals inside the cockpit just above foot level allow conversation between those topside and others below deck. As one reviewer noted years ago, it reduces yelling.

The cockpit is outfitted with lighting and stereo speakers mounted at head height to both port and starboard.

Roomy and airy are the key words when going below deck. A settee wraps the entire length of the saloon on the port side and provides sleeping room for two more guests. The long seat is abutted by an oval dining table and faces a smaller settee on the starboard side.

Lockers and other storage spaces are evident all around, as are portals, windows and hatches that allow natural light and air to enter cabin.

The galley is about as well-equipped as they come, with gimbaled three-burner LPG stove, broiler-oven, microwave, two-basin sink, refrigerator, freezer, storage for cookware, dinnerware and foodstuffs.  The boat carries 150 gallons of freshwater.

The master stateroom aft has a private bath with tub and standup shower. The forward stateroom also boasts a private head with shower. There’s a generous navigation station just aft of the saloon and opposite the engine compartment.

The boat’s auxiliary power is a Japanese 62-horsepower Yanmar 4JH2TE diesel. The engine is easy to access for servicing. The fuel tank carries 70 gallons.