Chris Johnson was bleary eyed as he filled his coffee cup at a popular open-air breakfast spot just steps from the marina at Nanny Cay. He was just one of dozens of sailors gathered in the hub of the British Virgin Islands during the 46th annual Spring Regatta. Like those around him, he seemed to be fully embracing the laid back but fun racing scene that takes over the island for a week each April.

“I slept in a 420 on the beach,” Johnson explained, when asked how his night had been. The choice of bunk, he said, was induced more by nostalgia for his days sailing at the University of Wisconsin than a night of too much partying. “I was walking down the beach, I was tired and it looked comfortable” he said. “I didn’t sleep there all night.” Don’t Panic lived up to its name, with the C&C 30 winning in a competitive fleet.
BVI Spring Regatta/Ingrid Abrey photo

Johnson, 27, who was working with a company called Yacht XP that offers all-inclusive sailing trips, was preparing for a day on the water from the comfort of a Horizon Yacht Charters sailboat full of young adults, but around him racers both casual and serious went through their morning pre-race rituals.

It is a scene repeated every year at an event that manages to straddle the line and seemingly be all things to all sailors: competitive grand-prix racing mingles with casual crews racing chartered boats with a healthy dose of onshore activities fitting for the island locale.

As for the timing of this excursion, it was no coincidence that they were in Nanny Cay during the Spring Regatta. The sun and fun of the BVI are accessible to anyone, racing or cruising, flying a spinnaker or relaxing under a bimini of a chartered multihull.

This year’s regatta was peppered with a number of sailors new to the event, but hardly new to sailing. The Moorings 42.3 Sweet Wind was raced by a handful of Connecticut sailors, including the skipper, Robert Amrein, commodore of the Thames Yacht Club. Together the crew own four sailboats of their own, but wanted a chance to race together, instead of competing against each other. The four couples range in age from 62 to 81.

The Avanti crew has plenty of reasons to smile, since the Hanse 43 won the jib and main division.
BVI Spring Regatta/Ingrid Abrey photo

“We came to give it a shot,” skipper Amrein said with a smile. The Sweet Wind crew was not deterred by their boat’s lack of speed on the course, as they were focused more on the venue and spending time with other sailors, away from the colder home waters of Long Island Sound.

The regatta is a great mix of elite racers and more relaxed sailors. The fleets are nearly evenly split between the two general types of boats, and each group experienced a mix of buoy racing and around-the-island courses. Chartered boats are available at all levels of competitiveness for this event. El Ocaso, a J/122 that has competed in the regatta for the past 10 years, is available as a turn-key charter from Caribbean Yacht Racing for competitive crews who want to walk onboard. Chris Brody and his crew placed third in the event, coming off the first place finish for El Ocaso at the Heineken Regatta. With 10 competitive boats in the CSA Racing 1 fleet, ranging from a Melges 24 to the Andrews 70 Runaway, the King 40 Blitz, skippered by Peter Corr showed off its stuff, winning six of the seven races.

The IC24, a modified J/24 hull with a Melges 24-esque cockpit is a popular one-design boat sailed in the Virgin Islands. The fleet was small, with only eight registrants, but it is growing in popularity. The competition was fierce, and with the boats based in Tortola, St. Thomas, USVI and Ponce, Puerto Rico, most of the sailors are used to dueling it out against each other on the racecourse.

At the other end of the scale the offshore multihull fleet, showcasing several Gunboats, had seven competitors with three of the four races being won by Elvis, owned by Jason Carroll. The experience in the fleet is quite varied, with some boats optimized for speed and others for comfort. Elvis has had an impressive run in recent history, setting the bar high for the newcomers to the fleet.

Another newcomer to the event was the C&C 30 Don’t Panic, owned and skippered by Julian Mann from the St. Francis Y.C. in San Francisco. Mann is a relative newcomer to the circuit, having raced in just four regattas, but he has put together a focused crew and took first in class. Trimmer Pete McCormick a veteran racer and North Sails salesperson, was all smiles after the first day of racing. “It’s great to see younger guys embracing the sport like this,” he said. The C&C 30 one-design fleet saw four boats competing, all of which took at least one bullet. 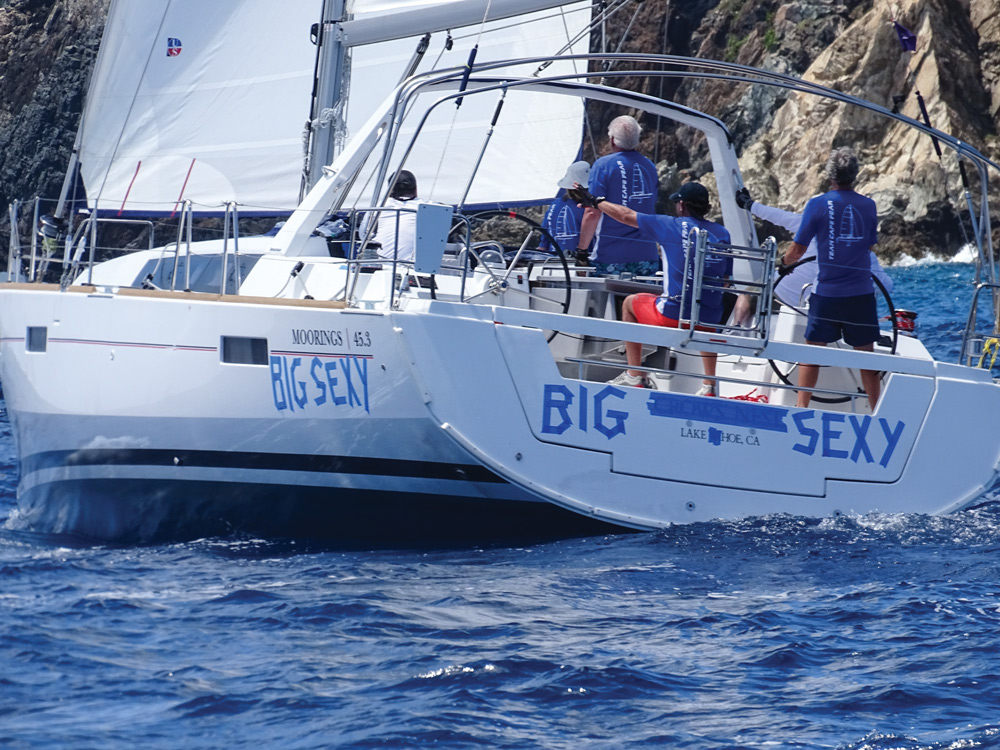 The British Virgin Islands draws sailors from all over the map on any given week, but the events at Nanny Cay for the BVI Spring Regatta attracted more than 80 boats from more than 15 countries, and that’s just the boats racing. The BVI Spring Regatta is comprised of three days of racing at the end of a week that kicked off with a Sailing Festival that includes three days of events around Tortola, building up to the three day regatta.

The Spring Regatta is headquartered at Nanny Cay Marina, a lovely spot with all the amenities needed to host an event of this magnitude. The newly added docks provided deep-water mooring for some of the larger boats, including the Gunboats and other high-performance multihulls, that could be accommodated by the new channel and longer docks, along with plenty of space for racers to stretch out their gear after racing.

Nanny Cay offers a marina, resort and boat yard all rolled into one. The facility has been built up to provide a protected harbor for boats of all types.  The outer marina is still under construction, with around 40 of the 120 planned slips available currently. The remaining slips will be open by August, providing even more dock space for the 2018 BVI Spring Regatta. Two boat lifts, a 40-room hotel, shops and townhomes are also on the property. With the expanded marina facilities, new condominiums, restaurants and other retail space are also in the works. The island of Tortola makes a picturesque backdrop near the start of the Sol Course.
BVI Spring Regatta/Ingrid Abrey photo

The regatta village centered around the bar and pool, where food and merchandise vendors set up shop daily. For those wanting to get a glimpse of the action without actually leaving shore, the finish line for one of the courses was conveniently placed just a few hundred yards off the beach, so spinnaker douses were in view from the comfort of the tiki bar, which is where Johnson would probably end up later in the day. When asked if he was going to go out and watch the racing from a spectator boat he shook his head.

“I raced in college. I’d love to get out there, but this is a different program,” Johnson said. “It’s more laid back, and that’s ok. We’re all having a great time.”