It was a typical race day on Chesapeake Bay’s Miles River. The wind started out at 12 knots, gusting to 16. But of the 11 Chesapeake log canoes that left the dock at the Miles River Yacht Club for a noon start, only nine made it to the line. And during the course of the 9-plus-mile race, two boardsmen fell off their boats and had to be retrieved, one mainsheet trimmer got tangled up in the sheet and body surfed behind her boat at 8 knots until the boat intentionally capsized to save her from drowning, and an 80-year-old skipper dumped his 100-year-old boat. More than half the fleet capsized in the tepid water. And Island Blossom won the Governor’s Cup for an unprecedented sixth time in row. 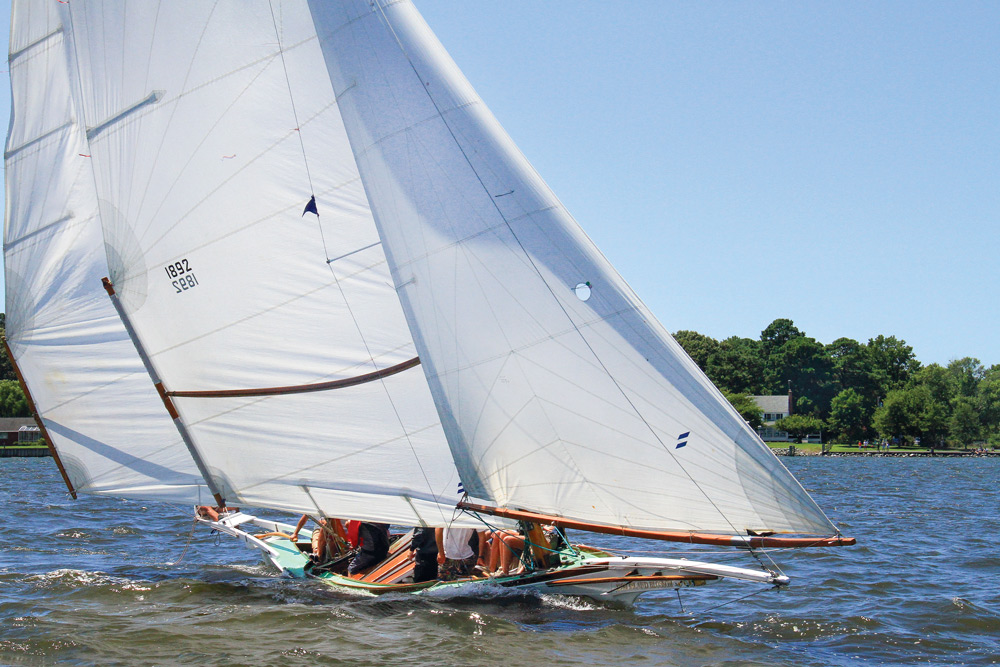 “So what else is new?” said Penny Rhine, the principal race officer. “We started the race thinking the wind would lie down a bit, but it didn’t. We carried on with the race even though we knew we were at the upper limits wind wise. All’s well that ends well. None of the boats got too beat up. And we put on quite a show for the spectator fleet.”

The history of the Chesapeake Bay’s log canoe racing fleet is a storied one.

Today, there are fewer than 24 log canoes currently racing on the bay. Originally, the boats were simple workboats, constructed of three or five logs fitted together to form the keel and sole of the boat. The 19th century skippers would race their boats back to shore, loaded with oysters, to reach the dock first and receive the highest price for their catch. So the fastest boat would earn the most money.

Most of today’s log canoes are 75 to 100 years old, with a few modern touches thrown in. Log canoes are distinctive with narrow beams, overcanvassed schooner rigs that make the boats extremely tender, with a significant propensity for capsizing. Counterbalancing the huge sail area are 8 to 10 large sailors commonly referred to as moveable ballast. These sailors perch at the end of 15-foot-long spring boards that they move from side to side as the boat changes tacks. Watching these big men traverse the boards is a study in fluid dynamics. While not quite ballerinalike in their movements, there is a certain synchrony as they slide down the boards, move them to the other side of the boat and clamber up the opposite side all the while timing their descent and ascent to the flow of the sails as they come across the rig in a slow-motion tack. 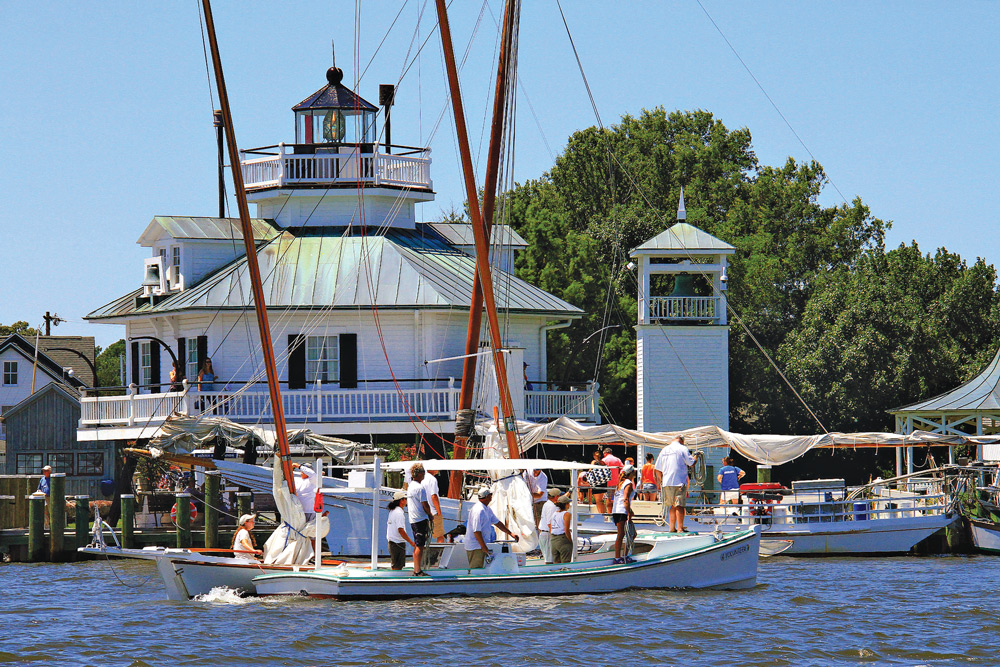 The fleet heads into the Miles River on Chesapeake Bay.
Craig Ligibel photo

Island Blossom skipper Corbin Penwell has been at the helm of the 125-year-old log canoe for 19 years, and is one of the winningest skippers of the modern era. Island Blossom was built in 1892 by William Sidney Covington in Tilghman, Maryland. She is a double-ended 32-foot 7-inch sailing log canoe with a beam of 6 feet 7 inches, and is owned by the John C. North II family, who are descendants of Covington.

Penwell credits the longevity of his crew for Island Blossom’s consistently winning record. “My foresheet trimmer has only missed one race in 18 years. Other crewmembers are equally senior. We anticipate each other’s moves and do the best we can to stay dry.”

Island Blossom usually sails with a crew of 15, with a handful of skilled positions including trimmers and lead boardsmen, one or two bailers and the boardsmen.

“That’s a lot of crewmembers to coordinate, but we make it work. What makes log canoe racing different is that each and every sailor is on the whole time of the race. Even the bailers, if somebody goes to sleep, we go over.” When Penwell first took the helm of Island Blossom, she was famous in the fleet for unceremoniously dumping her crew in the water.

“We solved that by adding 5 feet to the mast, putting up more canvas and adding more crew ballast,” Penwell said. “We still go over, particularly in the beginning of the season, but when we keep the boat up, our record of podium finishes is pretty strong.”

“Judge North is the godfather of our fleet,” Penwell said. “He bankrolls the major refits, although we do most of the annual upkeep ourselves.”

An expert on all things pertaining to log canoes, North has recently completed a book, Chesapeake Log Sailing Canoes: A Study in Tradition, Speed, and Elegance, with Pete Lesher, chief curator of the Chesapeake Bay Maritime Museum and noted Chesapeake artist Marc Castelli.

Penwell, 64, said the average age of his crew is 40-something. “That makes us senior to a lot of the crews. Whatever limitations age may place on us, we more than make up in expertise and in the ability to down voluminous quantities of beer at the end of the race,” he said.