Team USA finished a disappointing last in the February debut of the high-octane SailGP series that treated spectators in Australia’s Sydney Harbour to two days of high-speed foiling amid light winds and cheering crowds. 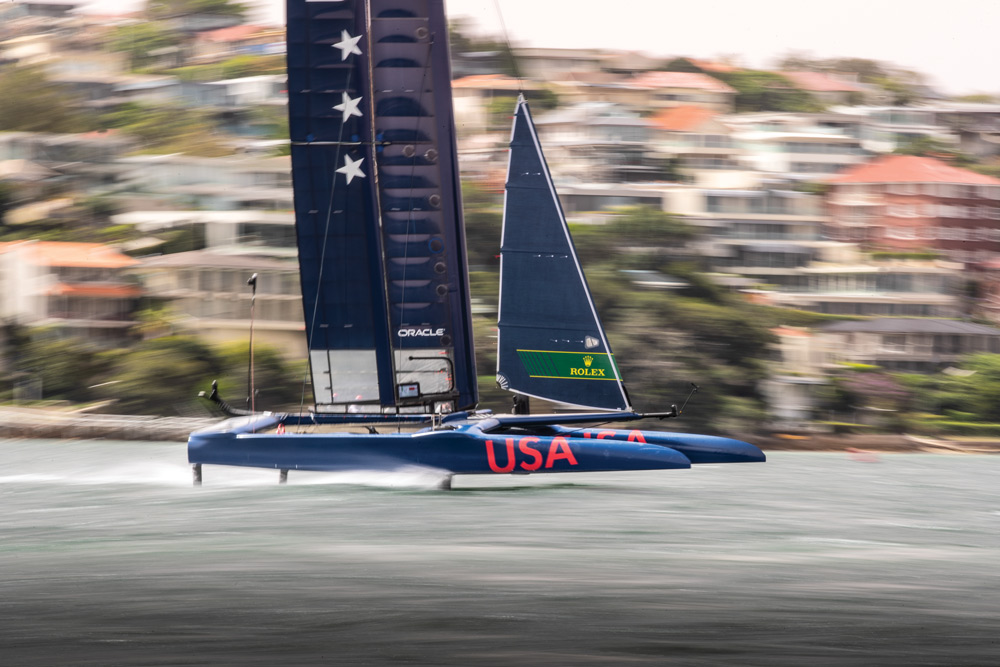 “We just haven’t had the time in the boat together to get it right all of the time,” said 29-year old America’s Cup veteran and Team USA skipper Rome Kirby. “We’re the youngest team in the fleet. No excuses. We got a third in one race and were a couple of moves away from some other podium finishes. We’ll be better in San Francisco. It’s our home turf so we’ll be ready to put on a good show for the U.S. fans.”

The brainchild of Larry Ellison and Russell Coutts, SailGP circuit is made up of six teams representing the United Kingdom, China, Japan, Australia and the United States, which are vying for a $1 million prize for the top team after five events. The teams race 50-foot foiling catamarans that are modified versions of the AC50 design from the 2016 America’s Cup with top speeds of 50 knots. The circuit moves stateside this spring and summer, and will be raced on San Francisco Bay in May and on the Hudson River off New York City in June.

After following the supercharged SailGP fleet around Sydney Harbour for three days, I learned two important things about the Aussies: They know how to party. And they know how to sail. Local hero and former Olympian and America’s Cup winner Tom Slingsby put on a clinic for the rest of the fleet and a crowd of more than 20,000 Australian, winning five of the six races in the inaugural event of the series.

“You’ve got to beat Slings at the start and hope he makes a mistake,” said fellow Aussie Nathan Outteridge, skipper of the Japanese boat that won the first race and came in second overall. “We managed to do that in the first race, but after that, he was pretty close to perfect.”

Over the course of the two-day event, Slingsby hit the leeward start line first five out of six times and earned a bullet each time for his efforts. Outteridge and several of his fellow skippers cited the lack of practice time they had with their boats for their results.

“When you take a bunch of guys who’ve never sailed together before and put them in a high-performance boat they’ve never sailed, and then put them on a race course where the closing speeds can approach 80 to 90 knots, you can see that every little mistake can be costly,” Outteridge said.

Slingsby and his Australian crew had plenty of practice and were more comfortable on their boat than did the other teams, and it showed. The Australians crossed the finish line an average of  five minutes ahead of their competitors in most races. The crowds’ cheers of  “Aussie, Aussie, Aussie, way to go Tommy, that’s the lad,” competed with the whir of helicopters and drones and the blast of boat horns as Slingsby and his all Aussie crew took a victory lap around some of the 2,000 boats moored at the edges of the racecourse. Outteridge was the only skipper who consistently challenged Slingsby, leading at least one sailing commentator to question the viability of the GP circuit if the level of competition does not improve over the next several venues.

“I expect the U.S. team to put on a better showing in two months in San Francisco,” Slingsby said. “All of those boys are good sailors. What they need is more time on their boat.”

Coutts was optimistic about SailGP’s success, citing the sell-out venue around the harbor.

“We will be installing a new flight-control system for the next event. And next year, we’ll have a modular foil that will let us reach some incredible speeds in moderate winds and scale back the power when the wind is really blowing.” 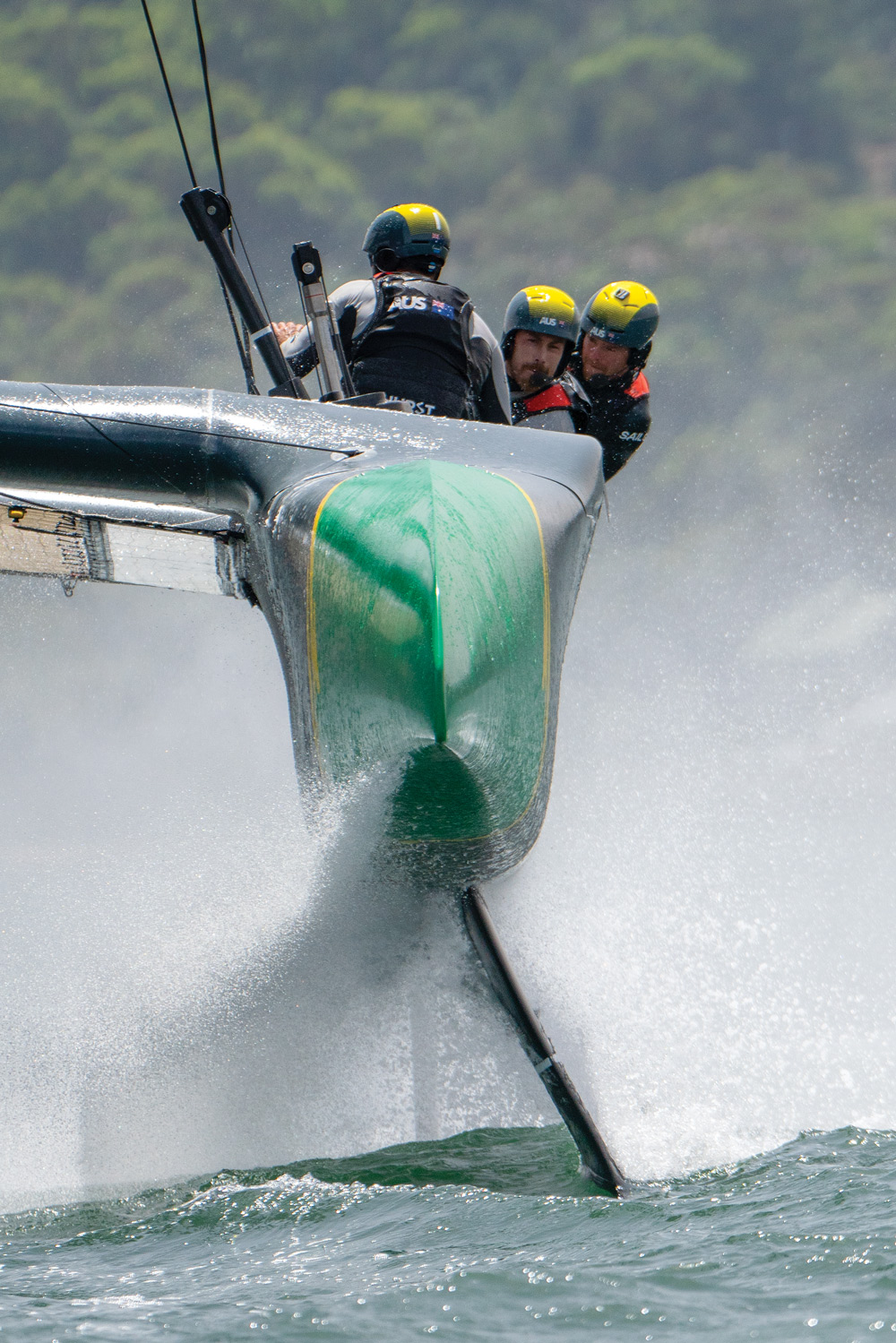 The trick will be to keep the basic F50 one-design viable over the next several years while the sailing community embraces new and different sailing platforms like the soon-to-debut foiling AC 75s. While the boats may look similar to the AC50s that raced in the America’s Cup in Bermuda, there are a number of differences that make these boats more competitive team to team. Built as a one-design by New Zealand’s Core Builders Composites, the boats all receive the same modifications going forward. The boats also use battery power to run the hydraulics needed to operate the controls for the foils, rudder pitch, jib sheet and the wing twist. In the America’s Cup in Bermuda, the AC50s relied on four grinders or cyclers whose only job was to grind in order to run the hydraulic systems. The batteries free up two grinders to provide manpower to sail the boat while also allowing the boats to be sailed with one less sailor than on the AC50s.

The flight of the boat is controlled by twist grips on the steering wheel or by a joystick controlled by the crewmember sitting in position three and given the title of flight controller. The ride height of the boat can be adjusted independent of the fore-and-aft bow down pitch. Miles of hydraulic lines inside the hulls and under the floorboards are used to distribute the power needed to cant the boards to the most efficient angle and activate the rudder-pitch control system. Coutts said it takes $6 to $8 million per boat to build, maintain, transport and crew.

“We don’t have any spare boats. The goal is to add one new boat and one new country per year and expand our venues to China and Japan,” Coutts said.

Coutts and Ellison said they envision a 10-boat fleet bringing high-performance racing to hundreds of thousands of spectators all over the world in the next few years.

“It’s all about the fan experience,” Coutts said. “We want to introduce our brand of adrenalin-pumping racing to spectators in a viewer-friendly environment.”

Most fans in Sydney watched the racing either from their own boats or from the decks of several dozen tour and sponsor boats. Live streaming video was available via digital and television feeds. There was a constant stream of data from the boats available to fans and the teams alike, and skippers could follow their competitor’s moves in real time. What makes Formula One or NASCAR in the States fun to watch is that on any given day, any one of the drivers can take the flag.

The San Francisco event will take place on May 4 to 5 on a racecourse off the city front, with the race village located on the Marina Yacht Club Peninsula. Team USA’s will have home field advantage, and with more time in the boat, the youngest team with an average age of 26 is hoping to improve.

“Being the youngest team has its advantages,” said Taylor Canfield, who is the oldest sailor on the team at age 30. He sails as Team USA’s flight controller and is heading up the America’s Cup challenger Stars & Stripes team. “We don’t know what we can’t accomplish. And with a steep learning curve, the kids can adapt quickly to new techniques and challenges.”

The team members, who are experienced Nacra, Moths and Lasers sailors, spoke of the thrill of hurtling over the water at speeds approaching 50 knots.

“Those foils create a high-pitched whine like a jet engine spooling up,” said grinder Mac Agnese. “We communicate via headsets and hand signals. The pace never slackens and our heart beats hit 170 to 180 per minute for the duration of the race.” The British team races across the F50 in a jibe. Matt Knighton/SailGP photo

Fueling the team are mountains of power bars and gallons of electrolyte drink. “We snarf down 6,000 calories a day, sometimes more,” said grinder Riley Gibbs.

“To be sailing at this level at this age and representing the United States is an honor and a privilege,” Canfield said. “We can’t wait to get more experience under our belt and put on a really great show for the hometown fans in San Francisco.”

After the team’s disappointing showing in Sydney, Kirby said the team is determined to improve.

“We’re young, resilient and are fast learners,” Kirby said. “We’re aiming for a podium finish in San Francisco. That’s a goal we hope to achieve.”

For more information about Sail GP go to www.sailgp.com.