This affordable coastal cruiser has plenty of room for entertaining

The Hunter design team was listening carefully to what potential buyers had in mind in the late 1990s when it came to building the ideal racer-cruiser, with an emphasis on the latter. The result was the Hunter 340, a sloop that would be fun to sail, comfortable and roomy enough for several friends or family, equipped with a gourmet galley, an enormous head and shower and suitable as a dockside summer gathering spot after a day on the water.

It’s almost impossible not to notice the integrated arch looming large just forward of the spacious cockpit. The arch, which supports the traveler, is among several key innovations that created a buzz in the yachting community. The in-mast furling (a popular option) and absence of a backstay also get attention, as do the portals that are oddly configured in different shapes and sizes like a museum of windows. 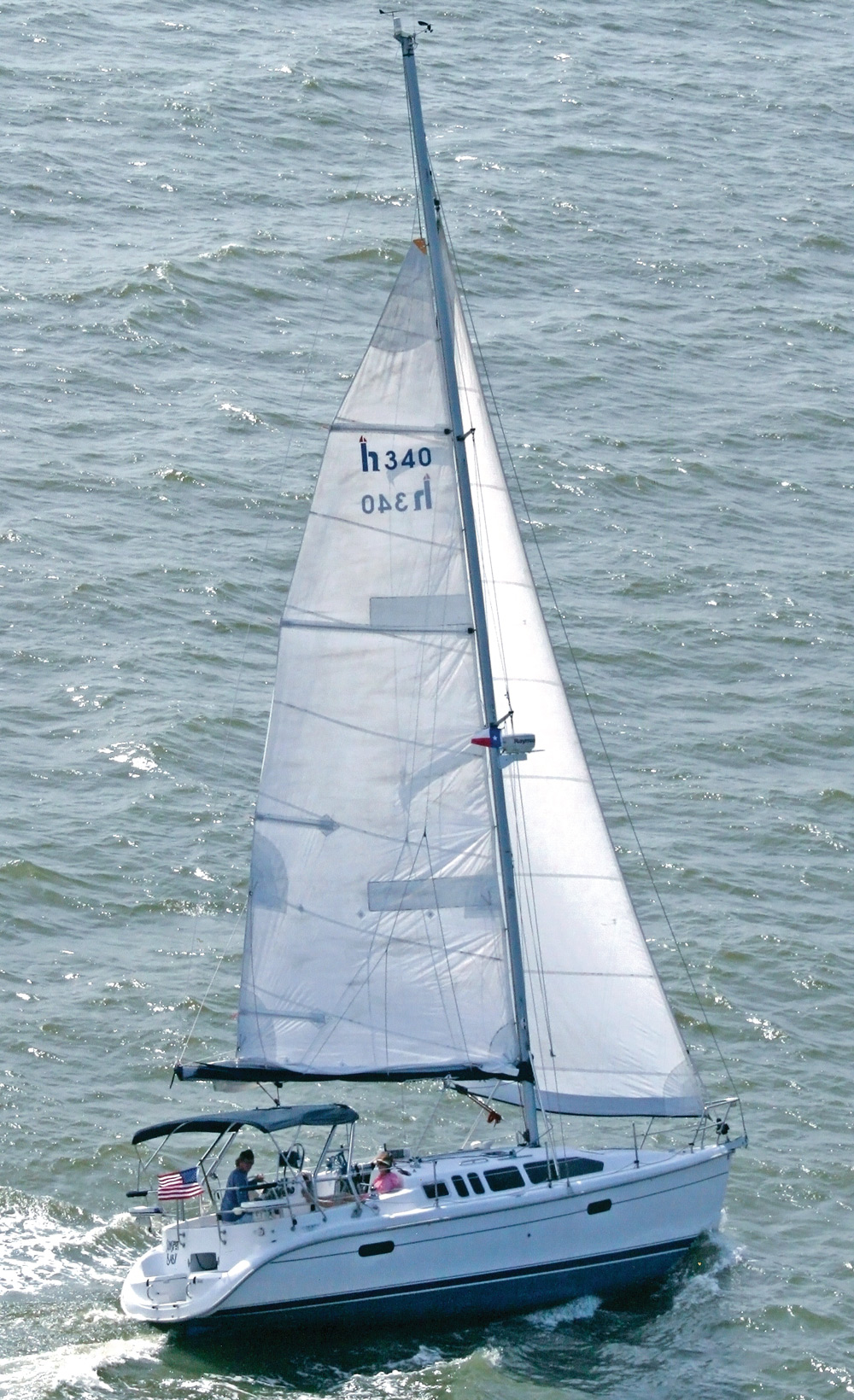 And then there’s the massive cockpit, where a stainless 28-inch destroyer-style steering wheel is mounted to an instrument console with folding table, small cooler and storage compartment. There are two seats mounted on the stern rail, perfect perches from which to feel the wind and get the best view. The helmsman seat is hinged, making it possible to walk through the reverse transom to the integrated swim platform with its freshwater shower. Oh, and there’s no wood trim on deck, which translates to less seasonal maintenance.

The Hunter 340 is a fiberglass masthead sloop with a tall, fractional rig. It features a spade rudder and a bolted-on lead keel. Constructed by Hunter Marine from 1998 to 2001, the 340 was engineered to carry less weight aloft with smaller mast sections. This was accomplished by using swept spreaders and reverse diagonals as well as mast support struts, a system descending from the B&R design invented by the late Lars Bergstrom and Sven Ridder. The design eliminates the need for a backstay and allows for a large roach main to power the boat, while the 110-percent working jib provides stability. The drawback of swept spreaders is that they keep the main from being fully eased when sailing downwind.

The hull-to-deck joint is through-bolted and fitted with a continuous rubrail. The mast and boom are aluminum. Most deck fittings are stainless steel.

Like any boat with a deck-stepped mast, excess compression over time and deck delamination from water infusion are problematic. The electrical system is, as one skipper put it, “bare bones” with few breakers and only one 30-amp shore power inlet. The swim platform opens to the bilge with only rubber latches to keep it secure, which could be a problem in rough seas. Some owners report thin line cracks on the hull bottom near the bolted-on keel. This most likely is fairing compound that overtime has become brittle and cracked as gravity and friction work against the keel. The keel was installed in bedding compound and then bolted. If weeping is evident, have the boatyard tighten the bolts. The boat’s gray nonskid deck paint tends to wear and peel.

The integrated arch accommodates the traveler, so there’s no need for the cockpit crew to move when tacking. Since the arch extends across much of the boat, the traveler can be longer and more efficient than those restricted by the width of the cockpit seats. It also protects the large cockpit from s flailing mainsheet and reduces overall line clutter. A bimini can be attached to the arch.

The arch was made with fiberglass on the 1998 and 1999 models, and changed to stainless steel in 2000 and 2001. Owners differ in opinion on whether the change was made to cut costs or improve aesthetics. Skippers also use the arch to mount speakers, line bags and other accessories.

The boat has plenty of cleats for docking, a bow pulpit, stern rail with two seats, double lifelines with gates, two dorade vents, hatches, an inboard jib track with cars, boom vang, roller furling jib, in-mast furling main, and stainless handrails. Mast shrouds connect to both the cabin exterior and the toerail, making it somewhat difficult for crew to make their way forward to handle foredeck tasks. The walk-through transom provides easy access to the integrated swim platform with its stainless, telescoping ladder. 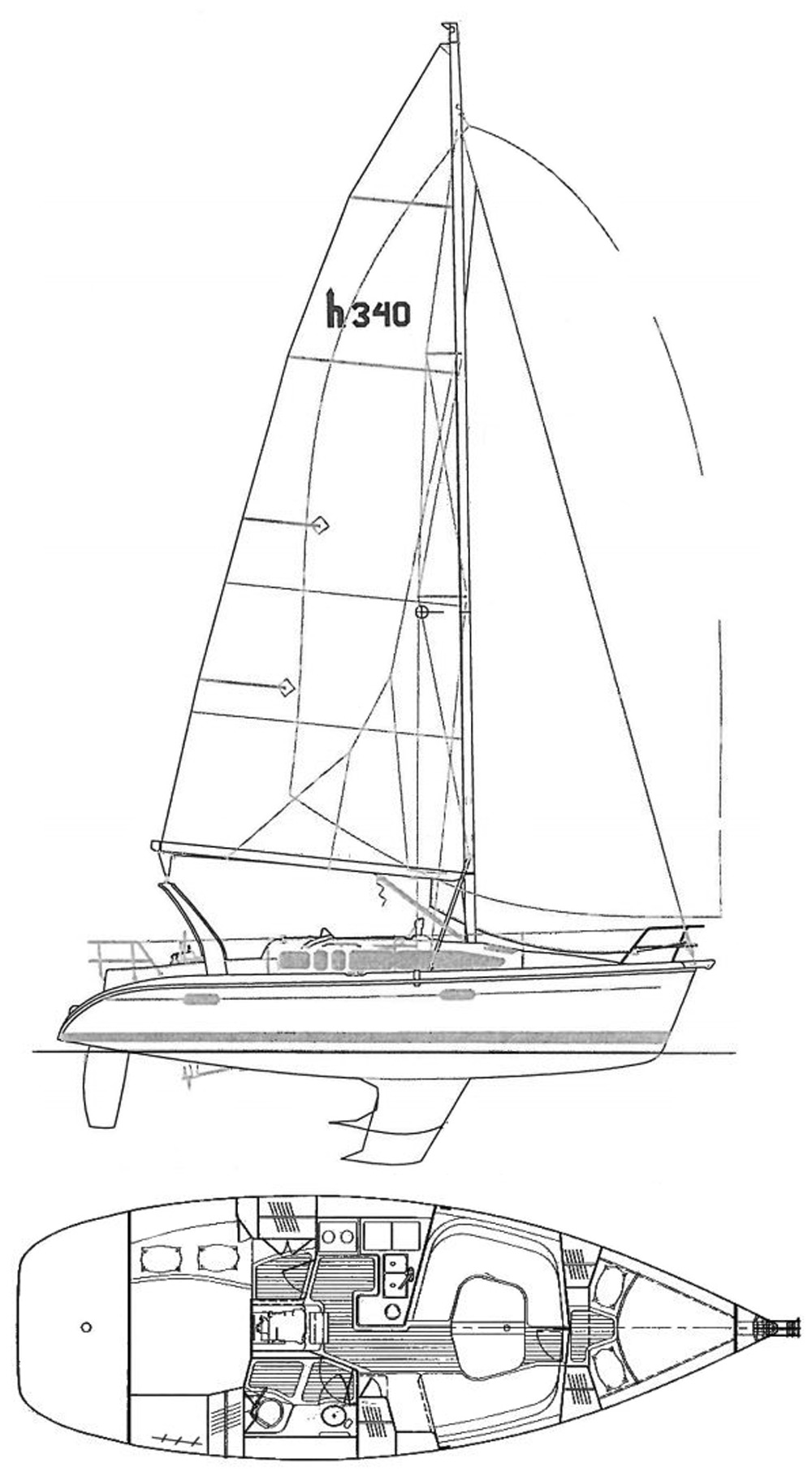 It sleeps seven: two in the V-berth, two in the aft cabin and three on the convertible dinette and settee. The head is designed with a large shower. Light and ventilation are plentiful via ports that open and are screened. The boat has multiple hatches. The enormous head has a full shower. There are two private staterooms and three hanging lockers.

The boat relies on a Japanese-built Yanmar 3GM diesel engine for auxiliary power. The engine is rated at 27-horsepower and is powerful enough to push the boat in a chop. The engine housing provides easy access to check fluids or change filters. The fuel tank holds 30 gallons.

Hunter Marine attempted to ease the effort of sail handling by using a large roach main. Although the sloop has a responsive helm, skippers have reported the combination of small genoa and big mainsail creates weather helm when sailing upwind, making it imperative to reef in 15 knots or more in order to balance the boat. Weather helm can also overpower the optional, battery-operated autopilot when the wind pipes up.

The jib sheet winches are on the cabintop rather than the coaming and can’t be reached from the helm, which makes the boat difficult to singlehand. Some 340s were made with only one winch on the starboard side, so it must be shared.

Owners note the typical upwind top speed is just over 7 knots. Although the Hunter 340 can be used for around-the-buoys racing, which it is in many locations, it’s more suitable as a coastal cruiser.

The Hunter 340 is a spacious, comfortable, innovatively designed sloop ideal for day sailing with several friends aboard or a weekend of coastal cruising.

DESIGN QUALITY:  The Hunter 340 was designed by the Hunter design team.

CONSTRUCTION QUALITY: The solid fiberglass boat is finished with a thick gelcoat. The hull-to-deck joint is through-bolted and trimmed with a continuous rubrail. Mast and boom are aluminum, the deck-stepped mast steadied by a series of support struts in addition to the shrouds. Hardware is stainless steel.

USER-FRIENDLINESS:  The cockpit seats eight and is set up for socializing. The boat’s integrated arch supports the traveler. The boat isn’t easy to singlehand because the self-tailing winches aren’t mounted on the cockpit coamings and the traveler is bolted atop the arch.

SAFETY: The boat is equipped with double lifelines and gates, stainless handrails, swim platform to aid offloading by dinghy. The Edson steering wheel is a rod-and-arm system bolted directly to the rudder, which avoids use of quadrants and chain connections that are often a source of breakage.

TYPICAL CONDITION:  The earliest models are just over 20 years old and owners say the hulls are holding up with no major defects or breakdowns. The gray nonskid deck tends to wear.

REFITTING:   The boat could benefit from refitting, including adding a bowsprit, winches, sturdier latches on the swim platform lockers and installing an internal barrier inside the lockers. Some owners have added thick felt to the edges around inside of engine access panels to reduce noise and prevent rattles, and a sump pump so that the shower drains overboard and not into bilge.

SUPPORT: There are about 60 members throughout the United States, Canada and Australia in the Hunter 340 Facebook group. Many owners use the website https://hunter.sailboatowners.com when searching for parts or advice.

AVAILABILITY: At least ten Hunter 340s were for sale in the United States in early spring and other hulls were available in Canada and Turkey.

INVESTMENT AND RESALE:  The Hunter 340 holds its value, with boats that sold as used 10 years ago for $50,000 still priced at approximately $45,000, depending on overall condition.