Like most sailors, I love to look at boats bigger than the one I presently own and dream about trading up. Some years ago, I was doing just that, admiring a 40-foot cruising boat on the hard, a broker's "For Sale" sign on the bow below the waterline.

A yard worker sauntered over and said, "There's a story behind that boat."

Naturally, I wanted to know what it was. "It's owned by a doctor," he said. "He was sailing to Bermuda when the boat jibed accidentally. The boom hit the doctor's son in the head and threw him overboard. The kid died."

Grief stricken, the doctor put the boat up for sale. I was told he never wanted to see it again.

Head trauma and death from out-of-control booms is more common than you might think, but with extra effort to rig a boom preventer, you and your crew can avoid becoming a sad statistic. It'll give you peace of mind when running down wind in strong breezes, and if you've already installed a preventer system or a boom brake (see "Putting the brakes on," page 32), you'll be more likely to use it. The preventer system requires some thought to make it best for your specific boat and the kind of sailing you do.

Key considerations are whether to install the preventer line (usually nylon) at the end of the boom or near the middle; where and how to lead the preventer line or lines, either to the bow or from amidships abaft the shrouds; and, whether you want a single line, a pendant system with two preventer lines, or a tackle or simple block system.

End-boom vs. midboom
Many veteran offshore sailors swear by an end-boom preventer system. Attaching the line at the end of the boom won't induce bends or breaks if the boom dips into a wave during a roll, which can occur if you attach the preventer line near the vang. However, an end-boom preventer system is more complicated than others, and in the case of preventers, ease of use translates into actual use, a very important consideration.

I had a simple preventer on my Bristol 24, which I used often. I didn't on my next boat, a Pearson 36 cutter, and I never rigged one. When the wind blew hard from dead astern, I simply dropped the mainsail for safety's sake and ran with the Yankee jib. Easier made sense for me because I cruised shorthanded, usually just with my wife, Liz. If I had a beefy crew, especially if I raced, I probably would have rigged a preventer system on the Pearson, but if it was a hassle to use, it wouldn't have been deployed often, even if it reduced the risks of an accidental jibe. 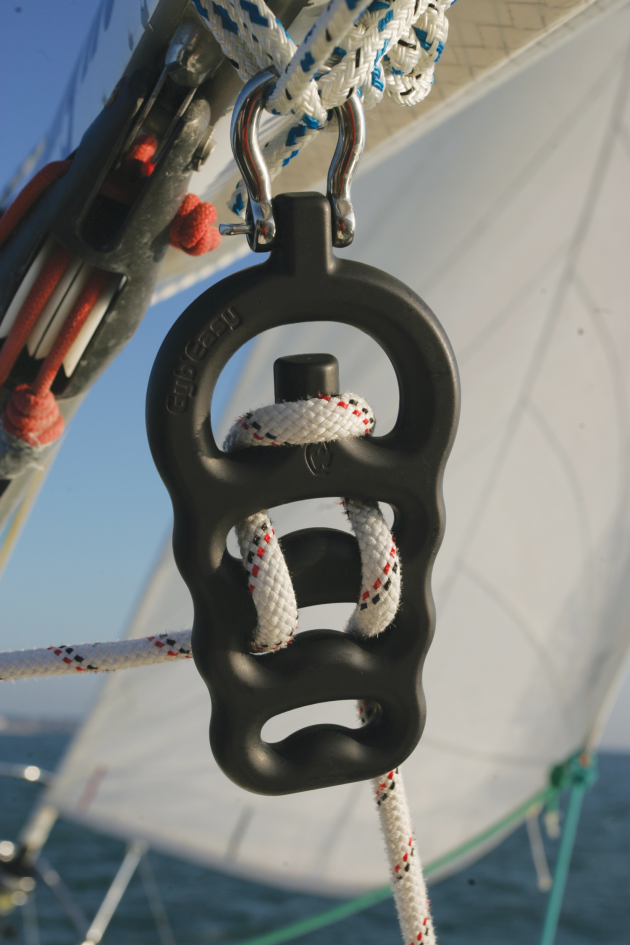 An end-boom system has merits, but with today's much more rugged booms, I think a midboom system like the one I had on the Bristol makes the most sense under typical racing or cruising conditions. You don't have to install turning blocks or snatch blocks at the bow, and run lines aft through additional snatch blocks amidships, then on back to the cockpit. Most preventer systems, be they end-boom or midboom, require releading lines and other steps before and after jibing. The ability to easily and quickly release the preventer from the cockpit is vital.

My Bristol 24 didn't have a dedicated boom vang, but it came with a vang fitting made of thick webbing with a hook on the end. I wrapped the webbing around the midpoint of the boom. I bought an inexpensive tackle and clipped one end to the hook and the other end to the base of the stanchion abaft the shrouds to leeward, then led the tail aft to the cockpit. The system was easy to rig and use. It also worked as a boom vang, keeping the boom from swinging while the boat was in swells or from lifting when on a run. The downside is that I had to unclip the tackle prior to the jibe, execute the maneuver, then rerig the tackle. Also, clipping the tackle to the stanchion base risked ripping out the stanchion in an accidental jibe, or potential deck core damage due to excessive compression.

Padeyes with backing plates for the tackle would have been much better, but I didn't want to bother with the extra costs and installation steps. The bigger the boat, the more work it will be to install a proper system with solid attachment points for turning blocks and/or snatch blocks. Attaching blocks to toerails or even sliding an extra car on the genoa track, if the lead will work, are possible alternative methods for securing blocks. Tying the preventer to the boom will work just fine. 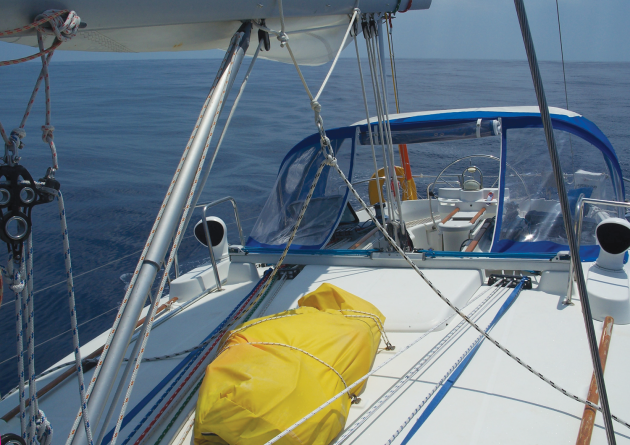 I've seen other skippers rig a midboom systems similar to the one I used on the Bristol, only they consisted of tying two preventer lines about in the middle of the boom, leading the tail through snatch blocks port and starboard abaft the shrouds, making sure the line wouldn't foul stanchions or lifelines, and then leading the line back to the cockpit. A variation on this would be to use a single line at least twice the length of the boat, clove hitch it to the center of the boom, and run the tails through the blocks aft to the cockpit.

Some racing skippers I know rig a boom bridle, or a length of line secured to each end of the boom with an eye positioned to take a snapshackle at the leading end of the preventer line. Using a bridle distributes the load, rather than concentrating it on one point on the boom. It's a great alternative to an end-boom system. Shock cord attached to the bridle line will keep it snug and out of the way when not in use.

An excellent end-boom system has two pendants secured to the end of the boom, running most of its length forward beyond the vang but not quite to the gooseneck. The forward ends of the pendants are equipped with snapshackles. When not in use, clip them to the boom near the gooseneck. The system also requires installing two turning blocks, or somehow securing two snatch blocks at the bow abaft the pulpit (padeyes are best). Port and starboard preventer lines are rigged with bowlines or eyes at the forward ends, and the tails are led aft through port and starboard snatch blocks amidships, then back to the cockpit.

I got a lot of peace of mind from the preventer on my Bristol, and looking back on it, I wish I had rigged a system for the Pearson. I might have had some exciting runs wind-and-wing in a honking breeze.