Home . Articles . News . Features . If it sails like a goat, smells like a goat and has been in 25 Mac races, it must be an… Island Goat

The exclusive club of veteran sailors celebrates 50 years of camaraderie

The Tuesday after the start of the Chicago-Mackinac race is traditionally a day for celebration on Michigan's Mackinac Island. Sailors are reunited with their families, crews embark on activities on shore and the Pink Pony bar is rocking from early morning on. 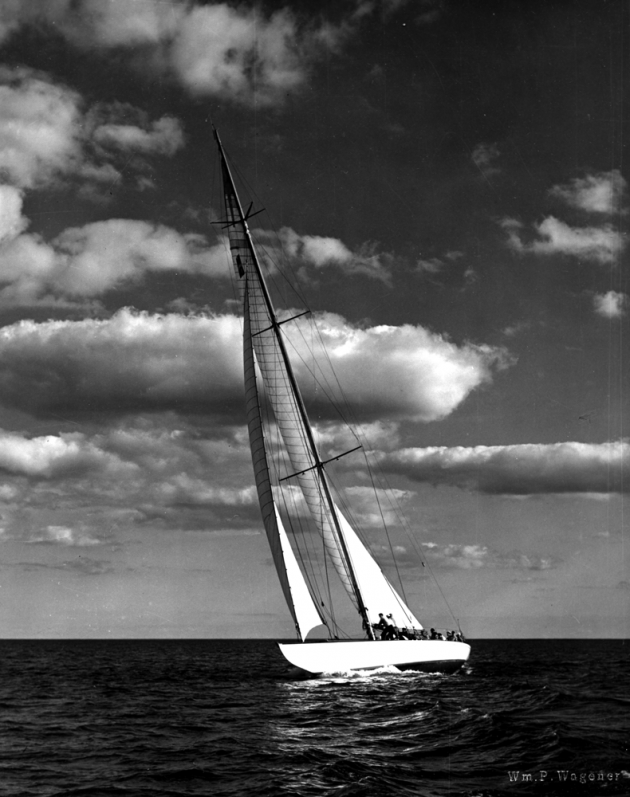 But the most exclusive party on the island happens just across the street from the island marina on the porch of the Island House hotel. Here stories (some more true than others) are shared, and races of the past recalled.

There's no secret handshake to get in. No, it takes much more to be admitted to this club: Sail in 25 Chicago-Mackinac races.
Those who attain the milestone are eligible for admission to the Island Goats Sailing Society, perhaps the most exclusive sailing fraternity in the world, according to IGSS Commodore Jack Kunze. "I don't know of any other group with requirements as stringent as ours," he said.
This fraternity of die-hard sailors of the race they just call "The Mac" celebrates its 50th anniversary this year, as its membership grows by the fastest numbers in history. The group has just under 300 members, and at its spring party and induction ceremony in April, 27 new "Old Goats" joined the group.

"We are growing by leaps and bounds," Kunze said. "It has really added to the social nature of the club." Founded in 1959 by three veteran sailors-Red Olson, Eddie Schnabel and Lynn Williams-the IGSS was formed with the idea of preserving the tradition of the longest freshwater sailing race, where competitors could swap experiences and share their love of the race. When the decision was made that members must have raced 25 Macs, 10 other sailors became part of the first class of Island Goats. By 1970 the IGSS had its own burgee, a Catalina Island goat's head on a blue background.

The derivation of the group's name is well known among Mac race sailors: After days on a boat, some sailors are said to smell like a goat. Aromatic concerns aside, this group shares one main interest. "It's all about the camaraderie," Kunze said. "That's the key thing our membership gains. We all share a love of the Mac race." For many Goats, the Mac is the high point of summer. The race is unique in its challenging and varied conditions that can throw raging storms, dead calms and everything in between-in the same race-at the 350-boat fleet. It's rife with opportunities for storytelling, and make no mistake, that is a crucial part of being an Island Goat.

Get a couple hundred sailors together at a social function and the stories are bound to flow along with the libations, but the IGSS actually has storytelling requirements. As part of their induction, new Goats must tell their favorite Mac story.
"The stories are largely true," Kunze said. "Some are hilarious, some are a bit too long, but the stories are very good in general." One of Kunze's favorite stories was told by former US Sailing President Janet Baxter who described the somewhat difficult process of spreading her father's ashes mid-jibe at Gray's Reef. As for himself, Kunze said he told a story dating from the days when the fleet had to call in Sunday afternoon and report their position to the Coast Guard cutter accompanying the fleet. With the majority of the fleet listening intently on the radio, some boats would occasionally exaggerate their position to shake competitors. When the boat Kunze was on couldn't hail the Coast Guard, they asked over the radio if another boat could call in their position. A response came back from a boat called Clark Kent to the effect of: "Yes, we can hear you, but no, we cannot transfer your position." When asked why, the crew on Clark Kent said, "Because we can see you, and you're lying." The membership roster is full of familiar names; greats of Great Lakes sailing. There are fathers and sons, fathers and daughters, brothers, husbands and wives (Kunze and his wife Carol became the third Goat couple when Carol joined the group in 2008) and John Gottwald and his daughter Karen became the first simultaneous father-daughter inductees this spring. The number of so-called Nanny Goats (women sailors) has grown exponentially since the first woman inducted into the society, Anne Juell, joined in 1979.

There are also eight Master Mariners-men who have sailed in 50 or more Mac races, Double Goats-sailors who have raced in 25 Chicago-Mackinac Races and 25 Bayview-Mackinac Races (sailed each year from Port Huron, Michigan, to Mackinac Island), and 13 Old Goat boats, including the Coast Guard Cutter Mackinaw, which for years escorted the fleet up the lake. The group occasionally awards the IGSS Freshwater Award, given to an Island Goat to recognize "meritorious service or an outstanding contribution to offshore sailing." This year's recipient, Peter Reichelsdorfer, has not yet joined the Master Mariner crowd, but he is a Double Goat. But the IGSS isn't just about swapping sea stories and having the occasional party. Over the years the group has contributed tens of thousands of dollars to the Mackinac Island Medical Center and the Round Island Lighthouse Preservation Society. In 1993, the group dedicated a red nun buoy, placed at the island's Windermere Point, which along with the Round Island Lighthouse serves as the race's finish line, as a commemorative marker. The Island Goat who led the charge to install the buoy, Ken Kohanzo, died earlier this year, and in a nod to the IGSS tradition of honoring members, another plaque will be added to the buoy following this year's race. It will honor Kohanzo's contributions to the IGSS. Of course, getting any group of competitive sailors together means someone will be keeping track of who won and who lost. The Island Goats are no exception, and each year prizes are given for the Old Goat with the lowest corrected time in each division. The Fastest Goat to Mackinac trophy, a mounted Catalina Island goat head, resides in Chicago Yacht Club among the highly polished silver cups. Beckstedt undoubtedly has a story to go with both of those awards. Sail enough Chicago-Mac races to become and Island Goat and he'll probably share them with you. No secret handshake needed.
--Erin L. Schanen

A roster of the members of the Island Goats Sailing Society and information on joining the organization is available at the group's Web site, www.islandgoats.org.

Photos from the collections of Bill Schanen and Peter Reichelsdorfer