Ihave always thought of myself as a journalist first and as a boating writer second. So just as a New York Times reporter is required by his professional ethics to disclose to readers that he has a loan from one of the companies mentioned when writing a story about mortgages, I believe I need to follow the same code. 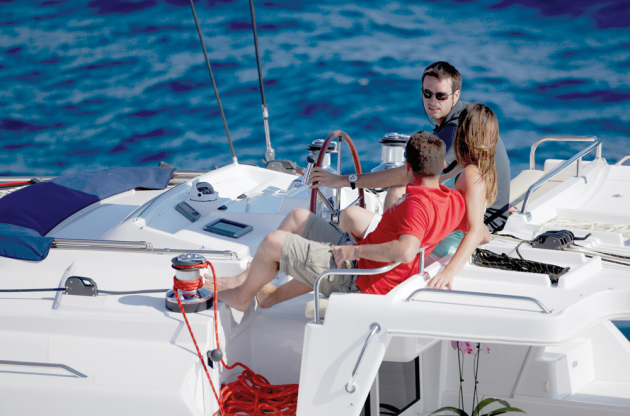 So this is my full disclosure: I love Lagoons. I have sailed them, cruised them and chartered them on several seas and a couple of oceans. I just wanted you to know upfront where I stand when I say that the Lagoon 440 may just be the best Lagoon ever built.

Of course, I say that knowing full well that there is a Lagoon 62 coming down the ways that is likely to push my personal Lagoon bar even higher. But for now, the 440 rings my bell.

I know this because I spent the better part of a day sailing off Fort Lauderdale with Nick Harvey, Lagoon's representative on this side of the Pond, aboard a pristine new 440 from Hugh Murray's Catamaran Co., which is the dealer for the southeastern United States. 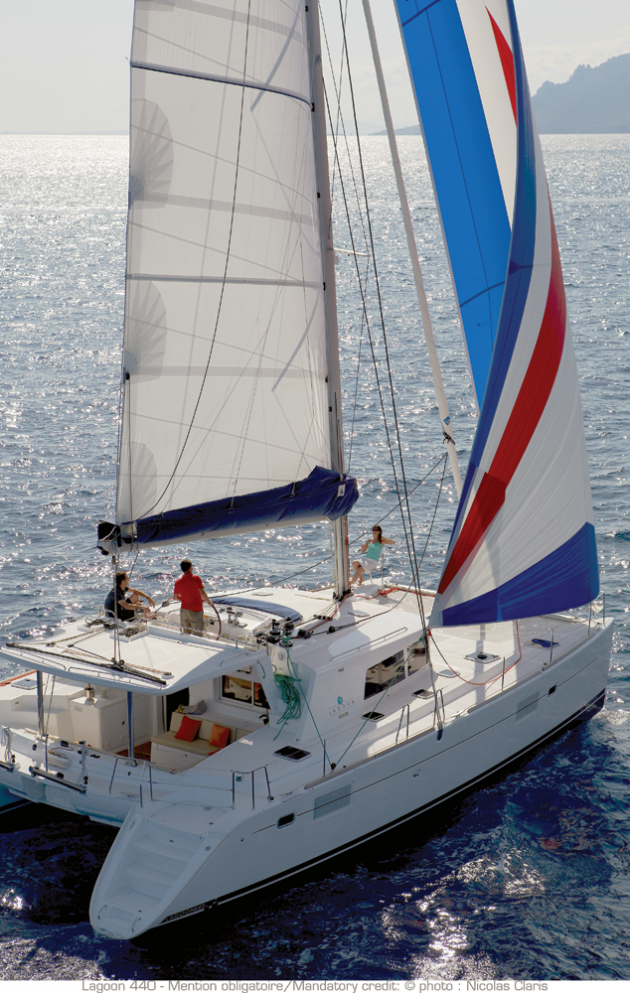 More disclosure: We didn't actually sail all day. We anchored for a while, under the lame facade of seeing how easily the anchor windlass works and, since our crew were wearing swim trunks and it was a steaming-hot Florida day, well, some of us sort of fell into the warm Gulf Stream waters.

That wasn't a bad thing, because it showed me how easily the swim ladder hinges out of a hidden locker on the transom, and how good the warm freshwater shower feels when you emerge from salt water.

On deck
Enough of this prelude. Lagoon is the largest builder of cruising catamarans in the world, and the 440 is the most popular cat of its size range. All Lagoon cats bear the hallmark of Van Peteghem/Lauriot Prevost, the naval architectural firm with a long history of successful catamarans. Many people don't realize that Lagoon started as a builder of the high-tech super-fast French catamarans such as Steve Fossett's record-setting Lakota, but now, under the Groupe Beneteau corporate umbrella that also includes Jeanneau and CNB, Lagoons can be found in charter fleets and private marinas worldwide. With its raised helm position the 440 is a fine example of Lagoon's out-of-the-box thinking. It is, in essence, a flybridge sailboat, but before you make any snide remarks, you need to give it a try. It's a brilliant design feature that solves a multitude of problems and creates an equal number of advantages.

First, the skipper has complete visibility in all directions, including both the main and jib. Second, the bridge is far enough above the water that you're unlikely to take any spray in normal conditions, yet it's close to deck level for easy access when docking.

Every, and I mean every, sail-handling line on the 440 leads to the bridge, so the skipper can set, trim and douse the sails without leaving the helm. Better yet, everything trims at the touch of a foot button with electric Harken winches. OK, so it isn't exactly man-against-the-elements, but if I never have to grind up another mainsail or sweat in another jibsheet using a winch handle, I'll be just fine, thanks. The flybridge design is both seamanlike and thoughtfully engineered. There are bins for line storage just where you need them, molded trays to corral your suntan cream and binoculars, and line stoppers so you can get the maximum use out of just four winches. Standard equipment includes an electric primary winch and three muscle-powered drums, but checking the option box for all electric winches is a no-brainer.

For sun/rain/spray protection, the 440 has what Lagoon calls a cabriolet top, but it's really just a small bimini that covers the skipper. It stores neatly in a recess on the cabintop but, since it leaves the rest of the crew unprotected, it seemed a little miserly.

A benefit of the raised bridge is that the cockpit transforms into a lovely and uncluttered entertainment area. There is a console to port with a wet bar (fridge and icemaker optional), and seating that wraps around a pair of table mounts in the sole (more about this in a moment). Shaded by the fiberglass hardtop, the cockpit can have a soft enclosure with air conditioning and heating, making it an all-weather living room.

Down below
Step through the sliding door into the saloon and you immediately know you're aboard a French yacht, with all the style and élan and haute couture you'd expect. The sole is dark, the wood is pale, and the upholstery is nubby. The entire effect is as cool as Catherine Deneuve and as inviting as Brigitte Bardot. Surrounded by large windows and cooled by one of the four individually controlled air conditioning systems, it takes full advantage of the wide beam. A curved lounge sweeps around to port, and the forward-facing settee is topped by a stainless steel rail. 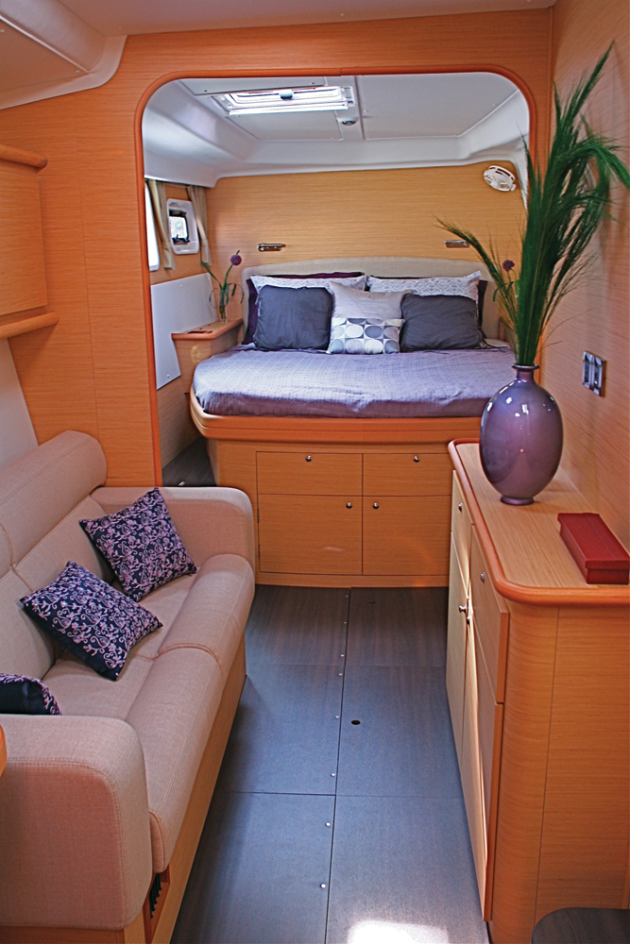 The table arrangement is at once clever, simple and complicated. Two removable wood-grained tubes form the base, and the 440 is delivered with two sets of legs (tall and short) as well as two tables (cocktail and dining). Put the tall legs and dining table in place and, voila, you can seat the entire crew. Pop out the tall legs and put in the short ones with the small table, and you have an out-of-the-way coffee table. Put the small table on the tall legs and it's like a French café. And put the big table on the short legs, add filler cushions, and you have a spare bed. The same set of choices work in the cockpit and, best of all, the big table nests out of the way in a hinged overhead cabinet with gas lifts. Slick.

The after side of the saloon is dedicated to the L-shaped galley, with not two but three stainless steel sinks (one doubles as a dish strainer), a three-burner stove with oven, and plenty of counter space. A sliding window serves either for fresh air or as a pass-through into the cockpit. Under the counter is the fridge, and the freezer is under the nav station in the forward corner. Like the rest of the 440, the nav station is finished in pale Alpilignum, so I should mention that now. Better known as Alpi, the wood stumped me (and my wood encyclopedia) until I discovered that it is a reconstituted wood from multiple veneers of dyed woods. And I thought only the gods made wood. It is absolutely flawless, which is the good news and the bad news. Real wood has flaws, and some people might mistake this as some version of Formica. The good news is that it doesn't show scratches (the color goes all the way through, unlike veneered wood) and panels can be replaced at any time with a perfect match.

There is a chart table with flip-up storage, and a counter with dual Volvo-Penta throttle and shifters, and a Raymarine jog stick for the autopilot. But I was stumped to find the engine gauges mounted flat on the counter. Not only are they unreadable, but they take up useful counter space, especially when Lagoon has wrapped a large panel for electronics around the area. How French.

Still, the nav station is a nice touch because it allows you to run the 440 from inside, using either the jog stick or a handheld autopilot controller to steer. So you don't have to run back and forth to the bridge, there's a winch to handle the mainsheet and traveller lines that lead to the cockpit. The electrical systems are grouped in a console just inside the cockpit door, with the AC breakers on one side and the DC switches on the other. Access to the actual wiring couldn't be easier: Simply lift the lid and all the wiring is neatly loomed and labeled. The Onan 11kW genset is in a soundbox under a cockpit hatch that provides superb access as well as storage around the box.

The Lagoon 440 is available in two layouts-owner and charter-with the only real difference being that the owner version gets the entire starboard hull as a private suite, while the charter version has two cabins like the port hull. 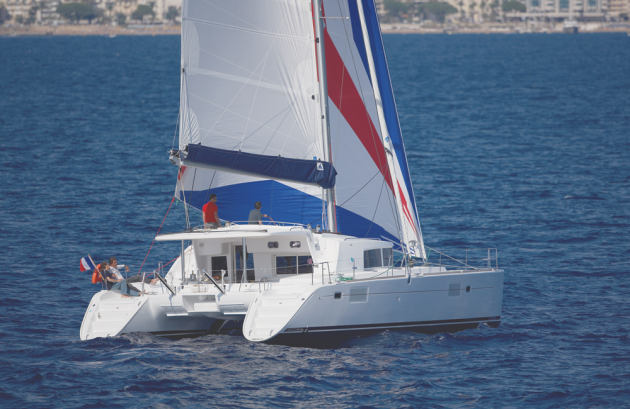 The 440 I sailed had the owner version, and it's a great choice if you don't plan to charter your boat, or don't want hordes of guests. An island double berth is aft with a padded headboard and a large window that uses one-way glass for privacy. The midcabin has a comfy settee, as well as more storage and a vanity with swing-out stool. Forward, the spacious head has a separate shower compartment.

The details
Power for the 440 comes from a pair of 40-horsepower Volvo Penta saildrive diesels that are in separate compartments aft of the cabins. The saildrive is an efficient and compact underwater unit that minimizes drag and provides horizontal thrust for efficiency. Deck hatches behind the cockpit lead to large storage areas and, by folding the floors out of the way, the engines are surprisingly accessible. I don't think I'd want to do any major repairs, but all the routine maintenance should be no problem. Flat out, we saw about 9.5 knots under power. A word about the foredeck. I've spent a number of happy hours (and Happy Hours, if you get my drift) sprawled on Lagoon trampolines looking at tropical night skies, and I wasn't disappointed with the two springy tramps spanning the hulls. But Lagoon has gone one better with a most civilized recessed settee in the foredeck. Complete with a table to hold drinks and munchies (the table is really the windlass cover), it would be a great place to enjoy the night breeze while at anchor, or even to get away with a book under sail.

Dropping the hook is child's play, especially since the remote control allows it to be done without leaving the bridge. But there's also a corded control so you can stand on the foredeck or trampoline and handle it from there. The deck is fully enclosed by double wire lifelines on very sturdy stainless steel stanchions, making it secure for adults and kids alike.

The anodized Sparcraft rig is dinghy-like, with upper and lower stays set well aft to eliminate the backstay. A pair of sweptback spreaders carry separate diamond stays and the furling headstay is 7/8ths rigged. The full-batten mainsail is from the Incidences loft that makes sails for the ocean-racing cats and tris. There is a triple jiffy-reefing system, and the roller-furling genoa can be reefed as well.

Under sail
Under sail the 440 is surprisingly quick. We didn't have much over 10 knots of breeze, but we saw 6s on the Raymarine GPS monitors while close reaching. The jib sheets lead well inboard on the cabintop, so she goes upwind well, although she seems sensitive to both the jib lead angle and the traveller, which spans the hardtop. The traveler can be used as a vang to tighten up the leach, or it can depower the sail with a "fisherman's reef" by letting the leach twist off. Nothing here to surprise an owner, and just the act of tinkering with trim (using those lovely electric winches) is fun.

At the end of the day, I really liked the Lagoon 440. It is beautifully built, the layout is perfect for family cruising, and it's fun to sail.

Who can resist such a Gallic beauty?