By Robert H. Perry
Cruising catamarans were well established before Gunboat. Twin-hulled boats had become mainstream and very popular with charterers. As time went on, the two hulls, connected by a main cabin, expanded to the point that almost the entire rectangle was filled with accommodations. Cruising cats got heavier and heavier. Efficient daggerboards gave way to shoal, very low-aspect, stubby keels. With this evolution the hope of good speed to weather was dramatically reduced. In time the big cruising cat became an accommodation-focused platform that was a far cry from the performance-oriented cats that had initially caught the attention of sailors. By Robert H. Perry
I like to think I truly understand small boats. I’m a fan of small, simple boats. My last boat, Perrywinkle, was small, and I enjoy reviewing boats that I can imagine owning. The Bente 24 is bu By Robert H. Perry
The RTC-22 comes to us from Buckley Design in Southampton, England. It’s a good fit to review this month because it’s aimed at the same market as the Bente 24. The RTC-22 is even shorter tha 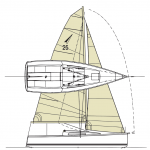 By Robert H. Perry
I have been a big fan of the Van De Stadt Design office since I was a kid and saw the first drawings of the mighty ocean-racing ketch Stormvogel. I think “Stormy” caught everyone’s eye. 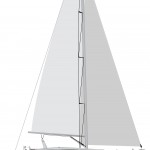 Beneteau's new flagship is all about comfort

By Robert H. Perry
The Oceanis 60 is the flagship of the Beneteau fleet, designed by Berret Racoupeau with help on the interior by Nauta Design. This is a very good-looking boat in the European modern style punctuated by a mainsheet arch over the cockpit. By Robert H. Perry
This design combines the efforts of the V. Ahlen design office with the Sirius Design Team. The overall design is highly unusual and I’m not sure I have ever seen so many features combined in a boat this size. Keep in mind that these boats are semicustom, so the layout and finish details are up to the owner working with the yard’s design team. I have drawings for six layouts, but the company built 14 different layouts on its previous 31-foot model. I think we can expect a lot more variations on the new 40. This cruiser offers sleek looks with lots of options

By Robert H. Perry
George Nissan designed the new Contest 42CS for Dutch builder Contest Yachts. I’m inclined to call this boat the Option 42. There are multiple interior options and multiple cockpit options. You are going to be hard pressed to find a reason not to like this boat. A blend of design elements makes this cruiser handsome and fast

By Robert H. Perry
Alain Mortain and Yannis Mavrikos designed this new 44- foot model, produced by Privilege Marine, and I liked this design the moment I saw it. I find all the proportions pleasing to my eye. The aim of the design is a fast cruising boat with a nice balance of speed and comfort. 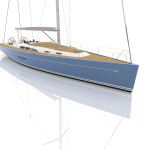 Aiming to be fast in IRC and ORR, this Tripp design also brings good looks to the table

By Robert H. Perry
Most of us have looked across the harbor at an incoming boat at some time and said, "Yup, must be Hinckley." The signs were hard to mistake. There were beautifully sculpted teak toerails and magnificent, big stainless steel bow fittings lapping down the stem. And there was the hull defined by graceful overhangs that gave the boat an ageless beauty, what I think of as the epitome of the American yacht. Interior volume and a great layout define this family cruiser

By Robert H. Perry
My Danish friend Tom came up with the "bloated tennis shoe" description for some kinds of yacht styling. He recently described a boat to me as looking like "the box the boat came in." By Robert H. Perry
One of the fun things about reviewing a Mark Mills design is that I get to Skype Mark and chat with him for an hour. Mark was not shy about explaining the details of his latest work to me. In this case, it's his exciting new 38-foot 9-inch IRC racer now being built in Turkey at the Gurit yard. This hard topped daysailer has a sweet, sweeping sheer and an easy-to-sail rig

By Robert H. Perry
I  live in the Pacific Northwest, and do everything in the rain, and  it does not bother me. The sun bothers me. When I saw this  new design from my buddy Paul Waring and his partner Robert  Stephens I thought, "Perfect! I can get out of the sun." Classic-looking on the outside, this cruiser is a modern design built for bluewater sailing

By Robert H. Perry
I have been a fan of the Rustler series for years. They are so English. The company’s style is in contrast to what my buddy Tom calls the “Euro bloated tennis shoe” look. By Robert H. Perry
It’s nice to get real designer drawings from Kevin Dibley. The drawings are expertly produced and a clear sign that Kevin loves his work. Kevin calls this sailboat a performance voyager. This catboat is a pugnacious daysailer and an American icon

By Robert H. Perry
The most fun reviews I do are of the boats I would like to own myself. I sure like this catboat. It would be the perfect boat for me to introduce my grandchildren to sailing. This svelte-looking performance cruiser has some speedy options

By Robert H. Perry
This great looking boat is a Judel/Vrolijk design built by Dehler Yachts. The vertical stem and transom give the boat a very strong look. Of course we see this in almost all the new boats but with 46 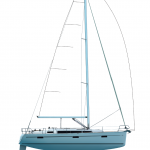 By Robert H. Perry
This new model from Bavaria was designed by the Farr office in partnership with Design Unlimited. I’m not exactly sure who designed what but I think it’s safe to assume that the hull, appendages a By Robert H. Perry
The Beneteau Oceanis 35 designed by Finot-Conq appears to be a very versatile design aimed at hitting a wide segment of the market. There is a daysailer model, a weekender model and a cruiser mo 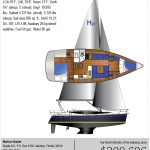 By Robert H. Perry
I like the look of this new Marlow-Hunter. To my eye, the look combines European-styling elements with U.S.-style proportions. I find it a good look and well done considering the volume they were By Robert H. Perry
This new Elan model was designed by Rob Humphreys in the UK with an interior design by Gigo Design. I’ve been a Humphreys fan for many years. His designs always appeal to my eye, and he has a very g
« Prev 4567891011121314 Next » 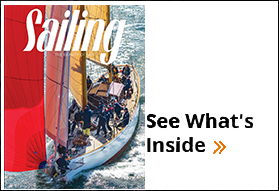