When the Johnstone boatbuilding family came up with the concept for their new J/111 speedster, ease of getting underway played a key role in deciding on the design.

Since Jeff and Stuart Johnstone comprise the J/Boats marketing team, through self-testing and customer feedback they've come to know what current and potential owners want, and one of those things is more time on the water, and less complication at the dock. Delivering on that demand meant conferring with chief designer Alan Johnstone to create a boat that functions as a daysailer, racer and occasional weekender, and which requires little preparation before shoving off. 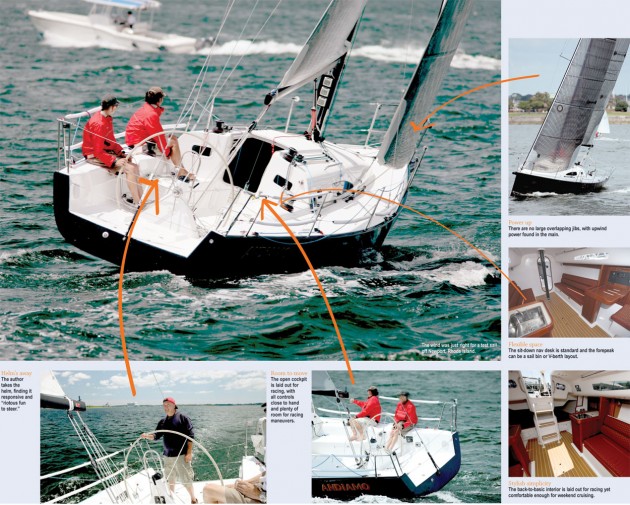 It was a warm summer afternoon in Newport, Rhode Island, shortly after the J/111's public debut, when SAILING Magazine joined the Johnstones aboard their latest design. As promised, in minutes we were off the dock at Fort Adams and sailing toward the Newport Bridge spanning Narragansett Bay, the J/111 pointing impressively high into the wind and cranking along at 7 knots.

The sleek 36.5-footer with its cut-out transom, nearly plumb bow and retractable sprit, presented a racy profile on the water.

The details
All control lines-halyards, reefing, furler and sprit-are led back to the cockpit. The Harken traveler is mounted on the cockpit sole where a recessed groove accommodates the bottom few inches of the 60-inch-diameter Edson destroyer wheel. Having such a big wheel means the helmsman can comfortably sit to windward to steer the boat and still see both the leading edge of the headsail and the waves. I put two fingers on the wheel's leather cover, moved it an inch in either direction, and the boat instantly responded.

According to Jeff Johnstone, several factors are responsible for such magic, including the E-glass spade rudder with carbon post and the non-stretching configuration of chain and wire cables connecting it to the helm. There are no ropes involved. The steering relies on Edson's Articu-lock sheaves with needle bearings and integral wheel brake. The J/111 has a laminated balsa-core hull that is vacuum infused with E-glass/vinylester, and a deck laid up by hand.

Below the water, a vertical L-shaped bulb keel keeps the J/111 upright. The stainless steel fin with a lead bulb is mounted in a hull recess with a stainless flange. The leading edge of the keel features a kelp cutter.

A simple sailplan was also part of the "less time at the dock, more time on the water" philosophy guiding the boat's design.
"We wanted a boat with easy sail management, something that can be handled by two people or even single-handed," said Jeff, easily reaching back from his position at the helm to adjust the hydraulic backstay. "We also knew we wanted a performance boat that we'd be excited to sail ourselves."

Simplicity is a driving force aboard the J/111. As Jeff put it, "We have found that a sailboat that's easier to sail is sailed more often. It's as simple as that."

Stuart heartily agreed, pointing to the non-overlapping headsail. "There's no big genoa on this boat," he said.
The J/111 is in some respects a turbo version of the J/105, which was launched nearly 20 years ago to start the sprit-boat revolution. The J/111 amps up the racer in the cruiser/racer formula by having a back-to-basics racing interior for less weight, longer waterline and more sail area. In general numbers, the J/111 is just over 36 feet, and just under 33 feet at the waterline. It has a slim 10-foot, 10-inch beam, giving it that sleek look. It draws 7 feet, 2 inches. The boat's maximum upwind sail area is 751 square feet. When downwind, it's 1,798 square feet.

The low-profile Facnor headsail furling drum is innovative because it's loaded with flat webbing instead of standard furling line.
The sails are controlled by two Harken Radial self-tailing winches, a two-speed Harken traveler system and a Harken adjustable jib lead system. The organizer at the base of the mast ensures lines remain untangled and run in the appropriate direction to their respective blocks or clutches. Control lines for the retractable bowsprit are led aft internally to a cam cleat mounted in the cockpit. Nobody need go below to launch the sprit.

Down below
Belowdecks, the appointments are lean-essentials only. Some of the less sexy but necessary aspects include a wastewater holding tank and 15-gallon fuel tank. The main cabin is spacious, with 6-foot headroom. The galley to port features a two-basin sink with top-opening refrigerated icebox and a freshwater foot pump. The sit-down navigation station to starboard is centered on a wooden desk with hinged lid for chart storage. An instrument panel is close at hand.

The boat has two quarterberths aft, each measuring 6 feet, 9 inches, and if the owner chooses, the forward cabin can be fitted out with a V-berth; otherwise it's designed as a sail locker. The settee in the main cabin has a length of 6 feet, 4 inches, long enough to sleep on. Options include two fold-up sea berths in the main cabin. The head is basic, private and equipped with a vanity. Although this boat could easily become a weekender, it isn't designed for extensive cruising.

Access to the 21-horsepower Yanmar 3YM20 three-cylinder, four-stroke engine with saildrive is a no-brainer. Located beneath the companionway ladder, it is contained in a molded, noise-insulated engine box. The ladder, with its teak steps, is removed by unfastening two clips near the top. The bottom legs of the ladder, fitted into round holes in the cabin sole, simply lift out. With ladder set aside, four stainless steel slide bolts unlock the engine box. There's plenty of room on three sides to check fluids and make repairs. The engine turns a 16-inch diameter Flex-O-Fold geared folding propeller.

On deck
The simplified accommodation plan creates room for a huge racing cockpit. Like the spacious cockpit, which the Johnstones contend is as perfect for bringing folks aboard during recreational sails or partying at the dock as it is for racing, the deck is unencumbered by excessive hardware. There are few fittings on which to trip or stub a toe. The cabintop rails are stainless steel. The boat features an anchor locker big enough for the aluminum hook, but the bow pulpit has no hardware to hang it, nor is the stem fitted with a roller. This is, after all, a racing machine at heart.

Some customers have ordered autopilots and even electric winches. Unlike manual winches on some boats, those aboard the J/111 can be easily converted to electric. "The winches don't need to be rebuilt or replaced," he said. "They're designed to be converted to power with minimal modification."

The J/111 is built by CCF Composites in Bristol, Rhode Island, and by J Composites in Les Sables d'Olonne, France.
According to Jeff, by year's end, or the  first quarter of 2012, more than 60 boats will have been delivered worldwide to customers from 10 countries on four continents.

Under sail
As the boat pinched into the wind and made for the bridge, a 12-Meter crossed our bow and shot ahead. With competitive nature, we leapt into pursuit mode, adjusting the sails until the boat's low center of gravity and relatively light weight of 9,300 pounds (approximately 2,000 pounds less than its predecessor, the J/109), helped it rapidly accelerate. The J/111 was riotous fun to drive, and much more responsive than the boats I'm used to sailing, so I immediately oversteered. Back on course, the J/111 locked in and performed, but the afternoon was waning and we still hadn't sailed downwind.

Under the Johnstones' watchful gaze, we fell off until the J/111 was running with the breeze, the hull speed increasing to double digits in a matter of seconds. Jeff asked, rhetorically, "Time to fly the chute?"

But his words went unheard by Stuart who was already on the bow, preparing to raise the asymmetrical spinnaker.

With the bowsprit fully extended and the A-sail drawing, the boat lurched forward with even more speed until we were planing, exactly what the J/111 was made to do.