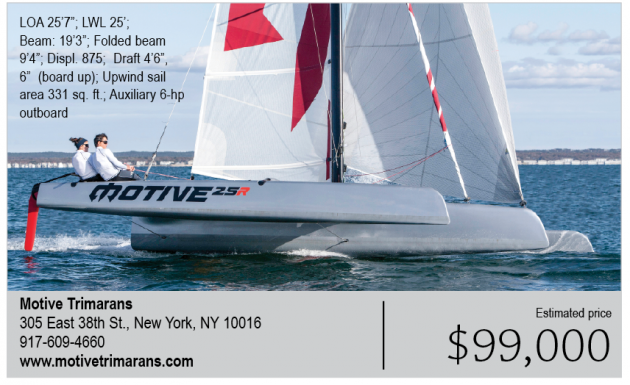 Polynesians sailed outrigger-stabilized canoes across the Pacific Ocean, possibly sailing as far east as Mexico, settling islands along the way. One can only speculate what they might have accomplished in the new Motive 25R, an adventure-sport trimaran from Motive Trimarans.

Designer Pete Ansel is a motorcycle racer and the trimaran's appearance is clearly influenced by his hobby. From the reverse, wave-cutting bows to the curved edges on the decks, the 25R screams speed even sitting at the dock. Raise the square-topped main, give the boat a touch of wind and hold on. The sail area-to-displacement ratio for the 25R, using the roller-furled screecher, is 91.29. To put that in perspective, the SA/D for the 25R is closer to the 108 SA/D of an AC45 catamaran than another fast boat, the early ULD Olson 30, at 71.72. In other words, the 25R is mostly teeth and not much tail.

The 25R is also a multipurpose boat. For trailering, the amas slide against the center hull like a sandwich, reducing the beam from 19 feet to 8 feet. The advantage to the sliding arrangement, as opposed to folding the amas up against the hull, is that it turns the boat into a runabout powered by a 6-horsepower outboard motor. The boat can also be motored with the amas in the extended position.

The 25R has other clever, convenient features based on the designer's principle that fast boats need not be complex. The full- battened mainsail sits very low to the deck, which is no problem because it has no boom. The main drops into a wide slot in the main hull for storage. The jib is self-tacking and it sheets in very close for those tight apparent wind angles at high speeds.

The "R" in 25R is for raid, a kind of multiday sailing adventure race popular in Europe, but popping up everywhere. The 25R was designed with that kind of performance overnighting in mind: A raid/camping package is available that includes twin tents for the trampolines and a sunshade over the center hull that gives the trimaran the internal volume of a 35-foot monohull. A privacy screen and portable toilet fit in the forward hatch. Its shallow draft, just 6 inches, is perfect for sailing onto beaches for camping. The boat's 20-plus-knot speed should make raid winning a snap-and those speeds are possible with six sailors on board.

Some raid courses are old Viking raiding routes. Maybe it's time to show the modern Vikings just how a modern Polynesian might raid-in a fast multihull: the Motive 25R.