Scan a marina and it's easy to pick out the J/Boats. Even the older models have a certain Indy Car rake to the cabintrunk, a simplicity to the deck and cockpit layouts, and a overall lean-looking, tense spring to the sheerline that gives the impression of a boat that is coiled and ready to bite. That look is carried forward to the next generation of J Boats, in the new 29-foot J/88. 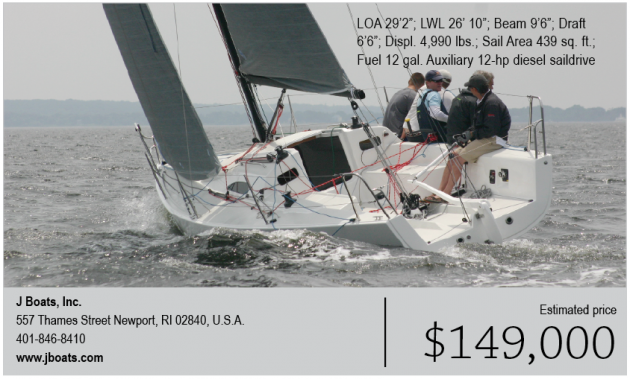 Designed as a "family speedster," it fills the space between small performance keelboats, like the popular 23-foot J/70, and offshore racers, like the 37-foot J/111. That's been a gap in J Boat's lineup-there hasn't been a new model in the 26- to-29-foot range in 20 years, since the J/80.

The J/88 follows J Boats current trend to designing lighter and faster boats: the 88 is 4,000 pounds lighter than the J/29.

Like all the light, fast sportboats, the 88 has a retractable sprit for flying an asymmetrical spinnaker. The big sprit opening is protected by seal between sprit bearings, which helps keep the V-berth relatively dry. V-berth cushions and platform top are options. The cabin sole is synthetic teak and holly, which will last longer than wood under racing conditions.

The boat has a galley sink and counter that also serves as a chart table and, on the other side of the bulkhead, a real marine head is aft of the V-berth.

A black anodized aluminum compression post stands in the forward part of the main cabin, supporting a deck-stepped carbon mast with double swept spreaders, by Hall Spars. The boom and mainsail are set up for a single reef. Lines are lead back on the cabintop rather than under it as is seen on some new boats. But the cabintop on the J/88 is relatively short because the cockpit is huge, nearly half the length of the boat. It's the classic tradeoff, the cockpit limits space belowdecks.

The cockpit is open for easy movement and the traveler is recessed into the sole just forward of the helmsman. There are two seats in the forward part of the cockpit. Behind the seats are the two self-tailing primary winches, and the secondaries are mounted on the cabintop. The transom is open and the external high-aspect rudder is mounted there, dropping the lifeline transforms the stern into a natural swim platform.

This boat is designed as a family boat, so swimming kids are part of the sailing equation, but they can leave the portable electronic games at home: The J/88 has an efficient but bare-bones electrical system, with two 12-volt plugs, circuit breakers and one battery (a second battery is optional) so unnecessary charging is generally out of the question.

A shore power package is optional, as is a boom cover with the J/88 logo. Those J Boat boom covers look good, but even without one marina gazers will recognize the 88 as a J Boat. Their first questions will probably be: Which model J Boat, and where do I get one?