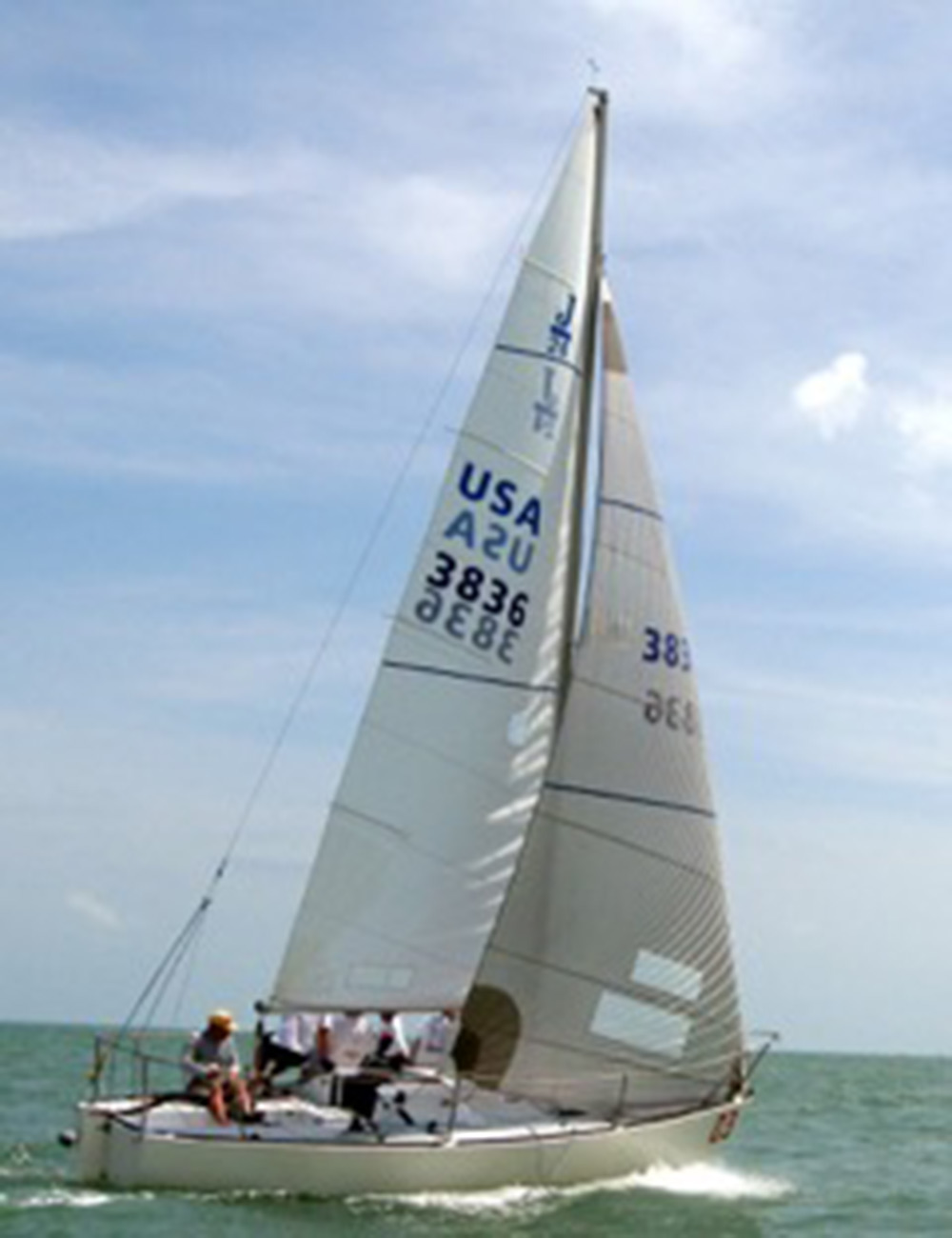 The J/24’s story reads like the script of a Disney movie. It’s 1975 and amateur boat designer Rod Johnstone is tinkering in the garage at the family’s Stonington, Connecticut, home. He’s got an idea for a small racing sailboat and he’s pleading with family members to help lay the fiberglass and sand the hull. There are parts scattered all around, mostly deck fittings and rigging stripped from his old Soling.

Johnstone spends about $400 on fiberglass matt and roving, wood, resin and other boatbuilding staples. Over many weekends, he brings Ragtime to life—24 feet long with a 9-foot beam—the end result of drawings made while enrolled at Westlawn School of Yacht Design in the 1960s.

Launch day arrives in 1976. With family and friends aboard, Ragtime dominates the racecourse, beating just about every other boat that dares pull up alongside. As news of Ragtime’s capabilities spreads throughout the sailing community, the designer and his brother, Bob Johnstone, officially establish the J/Boats company. Soon after, they contract with respected boatbuilder Everett Pearson of Rhode Island, owner of Tillotson-Pearson Inc., who agrees to construct J/24s at an old textile mill near Fall River, Massachusetts. For his part in the bargain, Pearson is to receive the domestic building rights to the J/24.

Bob Johnstone, then a vice president of marketing at AMF/Alcort, makers of Sunfish sailboats, uses his corporate skills to call attention to the J/24 and invests $20,000 to help cover startup costs. By 1977, the J/24 is gaining traction among competitive sailors hungry for a small, performance-oriented keelboat that can be used for racing as well as family weekend sailing. Within a year of partnering with Pearson, more than 250 J/24s are sold and delivered.

The J/24 remained one of the most popular recreational, offshore keelboats in the world, with 5,400 produced.

There’s no way to look at a J/24 and not imagine having fun. These boats still generate excitement although they’re no longer the cutting-edge designs they were in the late 1970s. It has four bunks and a sink in the cabin, but this boat is clearly all about racing. Newcomers to the sport welcome its simplified rigging, manageable size and affordable price.

The hull is made from fiberglass mat and roving coated with resin. Both hull and deck are a sandwich construction of fiberglass layers with a core of end-grain balsa. The technique makes the boat lighter but also opens up the possibility of water infusion and eventual delamination. Soft spots on the deck and discoloration of the gelcoat are telltale signs of water damage. Boats made before 1981 contain vermiculite, a yellowish-brown mineral often used for insulation or as a moisture-retentive medium for growing plants. The vermiculite was set into the bilge where it helped stabilize the protruding keel bolts. The J/24 has lead ballast, a fin keel and transom-hung rudder.

Potential buyers should examine the hull-to-deck joint on J/24s built before 1980 because the sealant often failed, causing leaks. Boats constructed after that date were bonded with 3M 5200 sealant. The earliest boats had relatively weak companionway and foredeck hatches that cracked under average use. Chainplates attached to the main bulkhead should be examined for hairline fractures and wear, as should the mast where the halyard sheaves are attached. Welds on the rudder attachment have been known to crack.

The earliest boats had pintles and gudgeons that occasionally failed. Inspect the transom where the outboard engine bracket is attached for cracks. Check to ensure the keel is securely attached to the hull, and look for delamination on deck. Until 1981, vermiculite was used to support the keel bolts vertically and laterally. This material tends to soften and weaken, and removing it is a laborious and potentially expensive process requiring an estimated 20 work hours. Discoloration of the hull inside the V-berth can denote hole repairs. A yellow or brownish color along cracks in the fiberglass at deck fittings or elsewhere suggests water absorption, especially if the crack is wider than a pencil mark.

The J/24 is a fractional rig sloop with aluminum spars. Safety features include stainless bow and stern pulpits, and stanchions with lifelines. Dents in the pulpits may be an indication the boat suffered a collision. Wiggle each stanchion to check for firmness and inspect the base for stress cracks. The traveler is bolted across the cockpit seats forward of the tiller. The running rigging has end-boom sheeting. The boat is rigged to fly a spinnaker, and a mechanical boom vang assists with sail trim. The cockpit has lazerettes and sitting room for two during races. Primary winches on the earlier models were not self-tailing. A halyard winch is bolted on the cabintop. Make sure any holes drilled in the deck have been properly filled, otherwise water may enter the balsa core and lead to delamination.

The cabin is snug and doesn’t offer standing head room, but there’s a V-berth, two quarterberths, a portable toilet, portable ice chest, sink with small counter and a few equipment lockers—just enough for a weekend cruise.

Since J/24s are occasionally trailered at the start and finish of the sailing season, as well as to and from races, the hull should be examined for fairness because trailer pads can cause damage if not placed correctly. Inspect the fin keel to see if it has grounded. Keep in mind that older J/24s have thicker, less efficient rudders than those built by TPI after 1985.

The J/24 was designed to carry a 3.5-horsepower outboard engine that attaches to a transom-mounted bracket. The engine can be raised or lowered using this bracket. Class rules require at least a 3.5-horsepower engine but anything much larger would likely add unwanted weight.

In heavy winds, the J/24 can be a tricky boat to sail, requiring quick reefing and headsail dousing. But in light-to-medium winds, this performance keelboat does just that, showing off the ability to maneuver, plane and rapidly accelerate. The J/24 is renowned for its light-air performance. As one satisfied owner put it, the J/24 “sails in anything from close to dead calm to 25 knots plus.”

The cockpit is relatively small and uncomfortable, a common complaint among J/24 racers. Ideally the boat should be raced with a crew of five, but it’s crowded. Class rules  require a crew of three or more. Sailors note the J/24 can be a wet boat.

The J/24 is an affordable, high-performance, one-design keelboat popular the world over, suitable for competitive sailing or for simply taking the family on a weekend cruise.

DESIGN QUALITY:  Designed by Rod Johnstone, the J/24 was one of the most popular one-designs launched. It is a highly maneuverable keelboat that’s easy to rig and easy to sail. Johnstone went on to design many other successful J/boats. (3.5 sailboats)

CONSTRUCTION QUALITY: Tillotson-Pearson constructed the first J/24s and other companies have been licensed to build J/24s. The hulls and decks are fiberglass cloth and resin with an end-grain balsa wood core to keep down overall weight.  (3.5 sailboats)

USER-FRIENDLINESS:  Fast and responsive, the J/24 sails like a dinghy but carries significantly more ballast, which gives it characteristics more commonly found in a keelboat. The boat tightly sleeps four if used for short duration cruising. The cockpit is small and uncomfortable. (3.5 sailboats)

SAFETY:  The J/24’s low freeboard, low center of gravity and relatively lightweight makes it susceptible to a knockdown in heavy winds. Once swamped, the boat can be difficult to right and may sink if cockpit locker doors are not securely fastened to prevent taking on water. (2.5 sailboats)

TYPICAL CONDITION:  Condition depends on the degree of care the boat has received and the amount of racing it endured. Boats built after 1980 will be in better condition because of improvements in construction. (3 sailboats)

SUPPORT: J/Boats is based in Newport, Rhode Island, (401-846-8410 www.jboats.com) and owners can register on J-Boats’ Owner Resources website, which offers technical information. The J/24 Class Association (www.j24usa.com and www.j24class.org) has links for active fleets. (4 sailboats)

AVAILABILITY: In mid-2015, there were dozens of J/24s on the used-boat market across the United States and Canada. Although some of the boats built in the late 1970s can still be found, most for sale are from the early1980s. There were 5,400 constructed.  (4 sailboats)

INVESTMENT AND RESALE:  Owners report slow devaluation, particularly for J/24s that have been maintained well. A brand-new J/24 in 1981 would have had a sticker price of about $15,000, which on average is about twice today’s asking price in the used boat market. (3.5 sailboats)