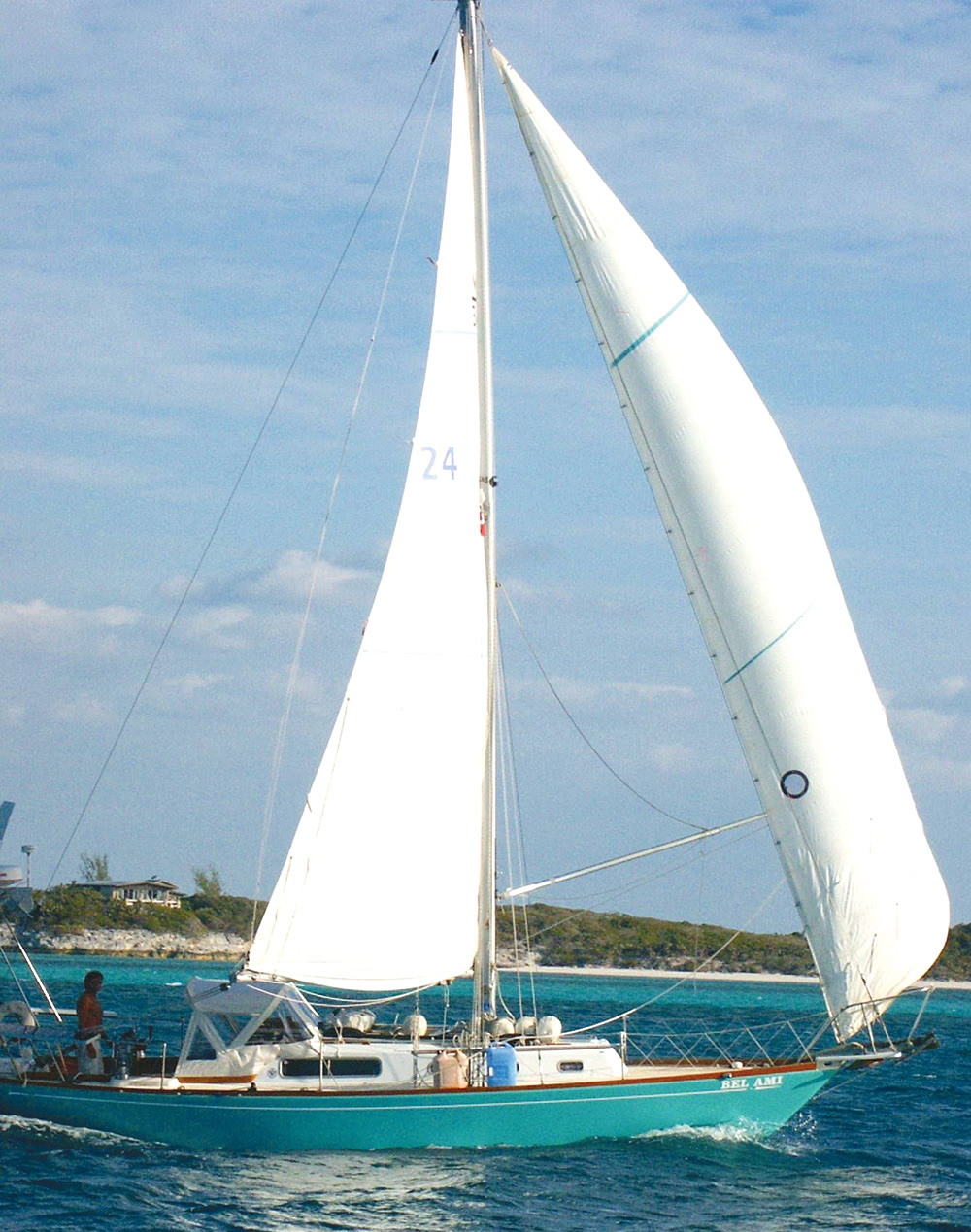 Charles “Charley” Morgan Jr. emerged as a top yacht designer and builder shortly after the 1960 launch of Paper Tiger, the 40-foot, fiberglass, centerboard yawl commissioned by New York yachtsman Jack Powell. The boat went on to win the SORC in 1961 and 1962. As a result, the fledgling, self-taught naval architect had plenty of work during those ensuing years, mostly designing racers. In rapid succession he designed and built sloops ranging in size from 24 to 45 feet under the Morgan Yachts and Columbia brand names.

With Paper Tiger’s victories still fresh in the minds of sailing enthusiasts, he founded Morgan Yachts in 1963 in St. Petersburg, Florida, and in 1965 launched the Morgan 34, a handsome masthead sloop.

“It was Labor Day when we launched the first one,” he said from his home in Treasure Island, Florida, “Although 6 feet shorter than Paper Tiger, the M-34 had a similar amidships section, powerful yet comfortable in a seaway. And the centerboard can take you anywhere.”

The M-34 was designed as a racer-cruiser to accommodate what were then the Cruising Club of America rules. It was priced at $14,995 and offered three interior layout options. The boat’s popularity among the racer-cruiser crowd was almost immediate, perhaps reflected by the fact that in 1965 the company grossed $1.7 million in sales.

Morgan Yachts thrived and was eventually merged with the international conglomerate Beatrice Foods in 1968. Morgan stayed on to design the wildly popular, shallow-draft Morgan Out Island 41, a roomy, easy-to-sail yacht with a center cockpit that soon became the darling of the charter fleet industry. At about the same time, Morgan designed, built and skippered the 12-Meter Heritage, for the 1970 America’s Cup defense candidate.

When Morgan retired in 1972, the company was offering 17 models. It was the last year of production for the M-34, which was replaced by the faster Morgan 35. Beatrice Foods sold the company to Catalina Yachts in the 1990s, after which the Morgan name was no longer used. By then the company had relocated to Largo, Florida.

While continuing to design boats, Morgan frequently sailed his beloved M-34 Checkmate, which carried a 180% genoa as was standard in the 1960s under the CCA handicapping rule.

Traditionalists are likely to fall in love with the M-34 at first glance, with its lovely sheer, graceful overhangs and many teak accents, from cockpit sole and coamings to toerails and cabintop grabrails. The relatively large cockpit is inviting and the narrow beam adds to the sense of overall sleekness.

The M-34 is part of the classic-plastic era known for its heavy-duty fiberglass construction and encapsulated lead ballast. The hull is solid fiberglass, the deck a fiberglass sandwich with a balsa core. The hull and deck are attached with mechanical fittings. An adhesive was also applied, but this was in the days before silicone so it tended to dry out. Deck fittings and other hardware are bronze or stainless steel. The mast is stepped onto the keel for strength. The centerboard, at least on earlier models, is heavy bronze.

More than 400 M-34s were constructed. According to Morgan, the company began offering its Sailing Kit Kraft program that allowed owners to finish the boat after the hull and deck were delivered. It’s unclear how many buyers chose this option. As a result, some of the boats on the market may be well built or reflect the work of
an amateur.

The Morgan 34 is strongly built, but the oldest have been around for nearly a half century. That means stress cracks are likely in the gelcoat, the deck and around fittings, especially stanchions, cleats and rails. Discoloration of fiberglass on the decks and topsides could indicate water absorption. The electrical system, if original, may consist of a tired fuse box and wiring in need of replacement. The centerboard, as it is on any boat, should be a point of concern. On the M-34, early models have a bronze centerboard weighing 250 pounds, which can put plenty of stress on the cables and sheaves used to raise and lower it. The sheaves can easily rust. Later centerboards were constructed of fiberglass.

The steering system should also be inspected although it isn’t easy to access. The mast step is an area known to need upgrading because it sits in saltwater trapped in the bilge. The metal step plate can rust out and should be replaced with a beefy synthetic one to reduce electrolysis. All chainplates should be inspected for leaks and cracks.

Most seacocks are bronze with gate valves. With a little TLC and elbow grease, they typically can be brought back to life.

The molded fiberglass hatches were new in their day and better than their wooden predecessors, but today’s metal-framed hatches are far superior.

The M-34 was a masthead sloop with double lower shrouds, and the spreaders on the early boats were wood. The roller reefing on the boom can prove cumbersome and difficult to operate. The chainplates are securely bolted to the edge of the deck. Original M-34s will likely have Merriman or South Coast No. 5 winches.

The flat mainsheet traveler might require upgrading to a more modern traveler on the coachroof. The cockpit has been described as overly roomy for offshore sailing, especially if a wave breaks over the deck. Some owners suggest the cockpit might be better with a bridgedeck instead of a low sill in order to keep seawater from entering the cabin. Owners also have complained the cockpit scuppers are small and do not drain with enough speed and efficiency. Some boats have tillers, others are outfitted with wheels.

What you see down below may depend on when the boat was built and who did the carpentry, plumbing and wiring. The most common layout features the galley to starboard with the dinette opposite. Some M-34s had an aft galley. The interior bulkheads were made of walnut or teak, the latter more expensive and richer in appearance. There’s plenty of natural light entering from the one large portal on each side of the saloon, supplemented by three smaller portals on each side, which provide adequate ventilation.

The boat is narrow compared to today’s 34-footers, and this impacts the amount of living space below deck. However, there is more than six feet of headroom in the saloon. The head, on the port side, is small and, depending on finish, may have a shower. Berths include the settee, pipe berths and V-berth, all depending on the model.

An M-34 could be ordered with a standard 30-horsepower Universal Atomic 4 gasoline engine or a Palmer M-60 gasoline engine. Some owners chose to pay an additional $2,000 and bought a Perkins 4-07 diesel engine or a Westerbeke 4-107. Today the diesels would command a higher price than the gasoline engines.

Owners advise installing a three-cylinder when upgrading because the boat weighs more than 6 tons. M-34 owner Jay Schryver of Rhode Island replaced the original Atomic 4 gasoline engine with a 30-horsepower Yanmar diesel in 1990 and it continues to easily power his yacht, Yellow Bird.

The boat has a 26-gallon Monel fuel tank, made from a combination of copper and nickel.

Despite its rugged construction, it is known as a tender boat at least until it starts to heel when it tracks nicely. It can also be subject to weather helm.  Without a traveler running the width of the cockpit, the relatively large mainsail can be difficult to adjust. Without a full keel, the M-34 doesn’t sail efficiently to windward, which is why Schryver, who has been sailing Yellow Bird for decades, appreciates the centerboard.

“With the centerboard, she goes fast off the wind,” he said. “And she has a well-balanced helm.” 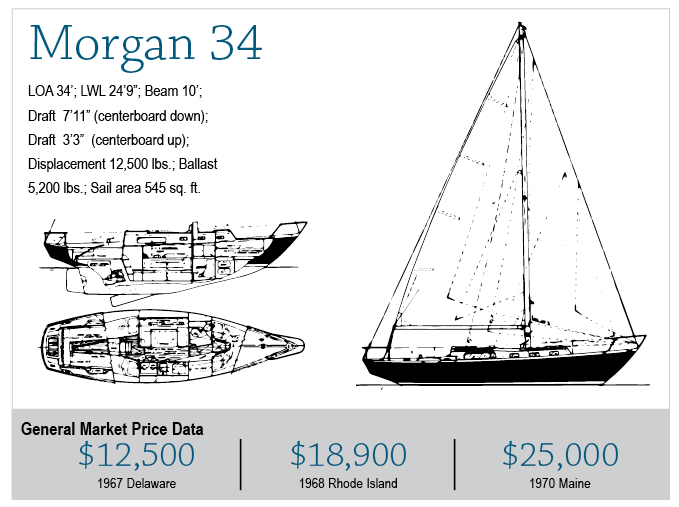 The Morgan 34 is a handsome, versatile, strongly built cruiser with excellent sailing capabilities and plenty of room below for a cruising couple.

DESIGN QUALITY:  With a winning racing yacht pedigree behind him, Charles Morgan Jr. designed the Morgan 34 sloop as a traditional racer-cruiser. The centerboard model allows for thin-water sailing. ★★★☆☆

CONSTRUCTION QUALITY: The Morgan 34 was strongly built with a solid fiberglass hull and a fiberglass and balsa-core deck. The aluminum mast was stepped directly to the keel for strength. The boat carried a 250-pound bronze centerboard, but it was later replaced with a lighter, fiberglass centerboard. ★★★★☆

USER-FRIENDLINESS:  The centerboard requires maintenance to ensure it operates properly.  The boat’s original winches are undersized and not self-tailing, and the roller-reefing on the boom can be inefficient and cumbersome to use. ★★★☆☆

SAFETY:  The encapsulated lead coupled with the centerboard’s weight and function were designed to keep the boat upright in a stiff breeze. The cockpit is considered somewhat large for offshore sailing and the scuppers too small. ★★★★☆

TYPICAL CONDITION:  The Morgan 34 was in production for six years, from 1966 to 1972. Since the oldest yachts are 43 years old, the overall condition may vary widely. Condition may also depend on whether the boat was built by Morgan Yachts, or was a kit boat that allowed owners to finish the boat themselves. ★★☆☆☆

REFITTING:  Like any older boat, finding parts can be a challenge. Many Morgan 34s on the used-boat market have undergone refitting that typically includes replacing the gasoline engine with a diesel, adding a boomvang and changing from end-boom to midboom sheeting.  ★★★☆☆

SUPPORT: Morgan Yachts is no longer in business but support is available from online owner associations and from Morgan himself via his website www.charleymorgan.com. ★★☆☆☆

AVAILABILITY: In summer 2015, at least seven Morgan 34s were on the used boat market in the United States. ★★★☆☆

INVESTMENT AND RESALE:  The boat has a strong resale value often based on the designer’s reputation, its sailing capabilities, and the beefy hull and standing rigging. ★★★★☆