Marketed as an alternative to the pricier Westsail 32, this compact cruiser is capable of offshore voyageing 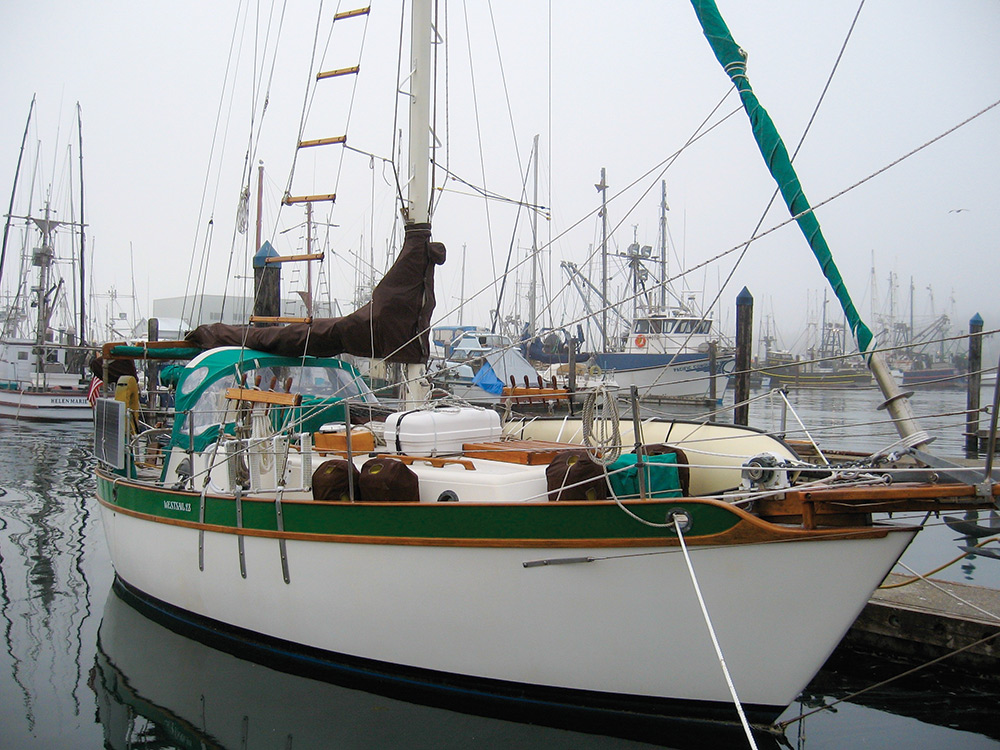 The 1975 sales brochure described the Westsail 28 as a world cruiser and the boat lived up to that promise. Although only 78 hulls were built, far fewer than the impressively popular Westsail 32, most of the small cruisers are still sailing the far-flung corners of the globe.

The history of the Westsail 28 is tied to the United States economy in the mid-1970s when Middle East crude oil prices were skyrocketing and families hoping to purchase a cruising boat were looking for affordability.

Bill Crealock’s Westsail 32 took off like wildfire and for many years reigned as the ideal family cruising boat at a time when that lifestyle choice was just emerging. Westsail continued to produce the 32-footer, but the company was unprofitable due to rising costs of material and labor.

The spike in oil prices affected the availability of gasoline, heating oil and other petroleum products, including fiberglass resin. As the scarcity increased, the United States government imposed purchasing quotas and boatbuilders were left scrambling for resin. At Westsail, foremen purportedly were forced to buy black-market resin. Although the Westsail 32 was selling, many sailors requested a slightly smaller and less expensive boat. The Westsail 28 was the answer.

Naval architect Herb David, who later designed a series of Lancer sailboats and luxury motoryachts, was hired to make it happen. Bailey “Bud” Taplin, hired by Westsail in the early 1970s, became the company’s general manager and kept Westsail 32s churning off the assembly line. Westsail opened a plant in North Carolina to meet the demand.

In 1974, Hans Weerman replaced Taplin and the following year the first Westsail 28s were splashed. Production continued into 1979, but the soured economy and traditional business practices took their toll long before the last Westsail 28 hull was molded. In 1977, Westsail declared bankruptcy. Weerman bought the company, financed by his Dutch relatives, and renamed it Westsail International. But it only survived two years. By 1979, the game was up. Weerman’s financiers closed the business and sold off the molds along with the equipment.

P & M Worldwide, a small laminating firm in Perris, California, owned by Ed Parker, bought the Westsail 32 and 39 molds at auction. Jomarco, a boatbuilding company in Santa Ana, California owned by Don Jones, purchased molds of the Westsail 42 and 43. An investment group acquired the Westsail 28 molds and shipped them to Mexico but no boats were built. According to Taplin, who lives in Cosa Mesa, California, those molds were laid out next to a tortilla factory between Guaymas and San Carlos, Mexico, and chickens had taken up residence inside them.

The Westsail 28 looks exactly like what it is: a compact, rugged, no-nonsense cruising boat capable of offshore sailing. The 28-foot cutter looks more like a 35-footer because of the bowsprit and, in most cases, a self-steering vane bolted to the canoe stern. The boat has a full keel with encapsulated ballast and a transom-hung rudder. Together these features, coupled with round, bronze portals and a series of beefy chainplates bolted to the hull exterior give the Westsail 28 a distinctly salty appearance. The boat seems to take its inspiration from the Norwegian-style double-ended cutter and at first glance might be mistaken for Crealock’s Westsail 32.

Before the first few were off the production line, 700 pounds of lead was added as ballast, increasing the total displacement from 9,500 to 13,500 pounds, making the boat sit a bit deeper in the water. The sail area was increased from 480 to 545 square feet.

The hull was constructed of hand-laid fiberglass. The hull flange was improved to help secure the hull to the plywood-cored deck and the rudder was enlarged on later models. Most of the boats were factory-finished, but some were released as kit boats that could be customized by hired craftsmen.

Prospective buyers should look for signs of aging. After all, the earliest hulls are now more than 40 years old. It’s likely that the original gelcoat has been recoated, but crazing may still be evident. Inspect the chainplates and turnbuckles for wear, an easy task since they’re bolted to the hull exterior. Examine the bowsprit for stress cracks since it supports a tensioned forestay. Delamination is always a possibility in any deck with a plywood core. In many cases, the original Volvo engine will have been replaced, but any auxiliary powerplant warrants a close inspection for worn belts and hoses, metal cracks, leaking gaskets, oil drips and telltale exhaust color.

The cockpit is designed to stay dry despite the lack of coamings, which makes seating less comfortable. The bridgedeck helps to ensure seaworthiness by keeping water out of the cabin. However, it also reduces the amount of foot room. The traveler is bolted across the bridgedeck. On most boats, the sheets are led back to the cockpit. Sturdy stanchions and bow and stern pulpits are evident. Halyards have dedicated winches. The tiller extends deeply into the cockpit space and provides efficient steering.

Arizona residents Steve and Lulu Yoder, owners of the 1976 Westsail 28 Siempre Sabado, removed the boom from the staysail to make room on the small foredeck.

“We rigged it to be self-tending without the boom so sailing with the staysail was still extremely easy. At nighttime during a passage, we would invariably put a reef in the main, roll up the jib and set the staysail. We would lose a few knots but if things turned ugly during the night, we were ready,” he said.

Belowdecks there’s plenty of storage space but living quarters are tight. The Yoders said the V-berth  was most comfortable for sleeping, and they ended up using the pilotberth for storage. In order to prepare their boat before they sold it, they removed every item unrelated to actual sailing.

“We filled 40 storage tubs,” Steve Yoder said. “I looked at the pile of tubs and then looked at the boat and can’t imagine how I could possibly put all that stuff back aboard and still have room for two people to live.”

Yoder, whose boat was factory-finished, said the boat lacks adequate space to stow bulky items such as a  life raft, dinghy or fenders.

“The stuff invariably ends up on deck, which is too bad as there’s precious little deck to use in the first place,” he said.

A mahogany and teak interior provides a warm glow. Headroom tops out at just over 6 feet and the boat carries 79 gallons of fresh water. From the companionway, the port side features a pilotberth tucked under the cockpit next to a small navigation station and an efficient galley. The galley has a shallow stainless sink and alcohol stove. On the starboard side, there’s horseshoe-shaped dinette with drop-down table that can be converted into a double berth and easily accommodates two adults. The head with toilet, sink and shower, separates the dinette from the V-berth and chain locker.

Since some 28s were kit boats, the make and model of the engine can vary. Engines found in these boats today include the original 13-horsepower Volvo MD11HD diesel as well as the replacement 21-horsepower, three-cylinder Universal M-25 diesel and the Westerbeke 30B-3 diesel.

“The access would be stupendous for any boat, but for a 28-foot it’s absolutely amazing,” Yoder said.

The fuel tank holds 36 gallons. According to Yoder, his Westerbeke with a full fuel tank has a range of 700 miles, calculating consumption at one quart per hour at 4.5 knots.

“There’s already ample food storage so, with a couple jerry cans of diesel, a watermaker, and decent wind, this little boat can take one person or a couple anywhere.”

Although the boat has many admirers, the Westsail 28 is generally perceived as slow underway and some owners say it tends to hobbyhorse in adverse sea conditions. Admirers contend the boat is highly maneuverable with a surprising ability to sail close to the wind. One critic commented that the boat performs poorly downwind.

“Once the wind is aft of the beam, I love to furl the main, leave the staysail rolled up and just let the genoa out. She’d just pull us along like a team of sled dogs for miles,” Yoder said.

Often compared to the Pacific Seacraft Orion 27, the Southern Cross 31 and the Bristol Channel Cutter 28, the Westsail 28 is an affordable, modest-sized, ruggedly-built cutter capable of offshore sailing with a crew of two or three. 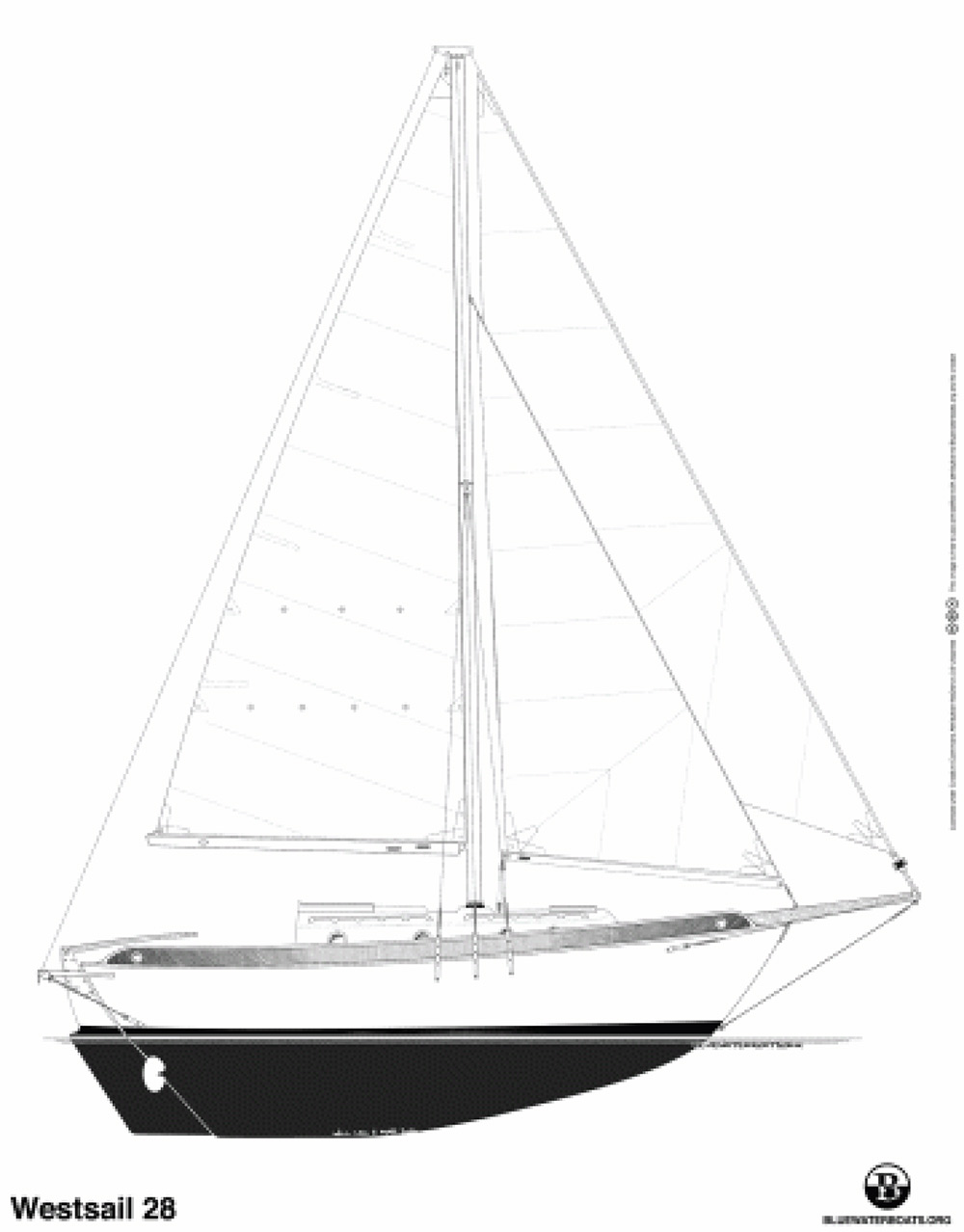 DESIGN QUALITY: Designed by naval architect Herb David, the Westsail 28 was seen by most sailors as a tradeoff if they could not afford the larger Westsail 32. The cutter has lovely lines and overhangs. The boat features a bowsprit and a canoe stern with transom-hung rudder. ★★★

CONSTRUCTION QUALITY: The Westsail 28 was constructed of hand-laid fiberglass. The high quality puts the boat among the most seaworthy, compact and rugged offshore cruisers ideal for a crew of two or three. The Westsail 28 was also available as a kit boat, which is indicated by the letter “K” in the first four digits of the hull number. ★★★

USER-FRIENDLINESS: The Westsail 28 is a joy to sail and able to point higher than expected. Its diminutive size makes anchoring in tight spots less challenging and its relatively shallow draft allows entry to coves and bays where deeper keel vessels dare
not venture. ★★★

SAFETY:  If safety can be measured partly by solid construction, then the Westsail 28 should leave the owner’s mind at ease. The boat is fitted out with heavy-gauge standing rigging and a cockpit designed to shed water. Deck space is narrow between the cockpit and bow, making sail changes more difficult. Teak grabrails are on the coachroof. ★★★

TYPICAL CONDITION: The Westsail 28 features robust construction and it tends to be maintained by owners who sail offshore and know the value of keeping things shipshape. ★★★

REFITTING: Refitting depends on whether the boat was entirely factory-built or a kit. Westsail parts and original manuals are available. Owners note that the traveler must be relocated aft to accommodate

SUPPORT: Westsail 28 owners will find support at the Westsail Owners’ Association at www.westsail.org/ws28 and Westsail Parts, www.westsailparts.com, which was started by Bud Taplin, aka Mr. Westsail, who was the company’s longtime production manager. ★★

INVESTMENT AND RESALE: The boats hold their value and are in demand by sailors who intend to go offshore or coastal sail in all weather conditions. When new, the Westsail 28 sold for $27,950, which isn’t much more than the average asking price of a used one today. ★★★