Pretty to look at and tough to boot, this classic cruiser makes a fine family boat 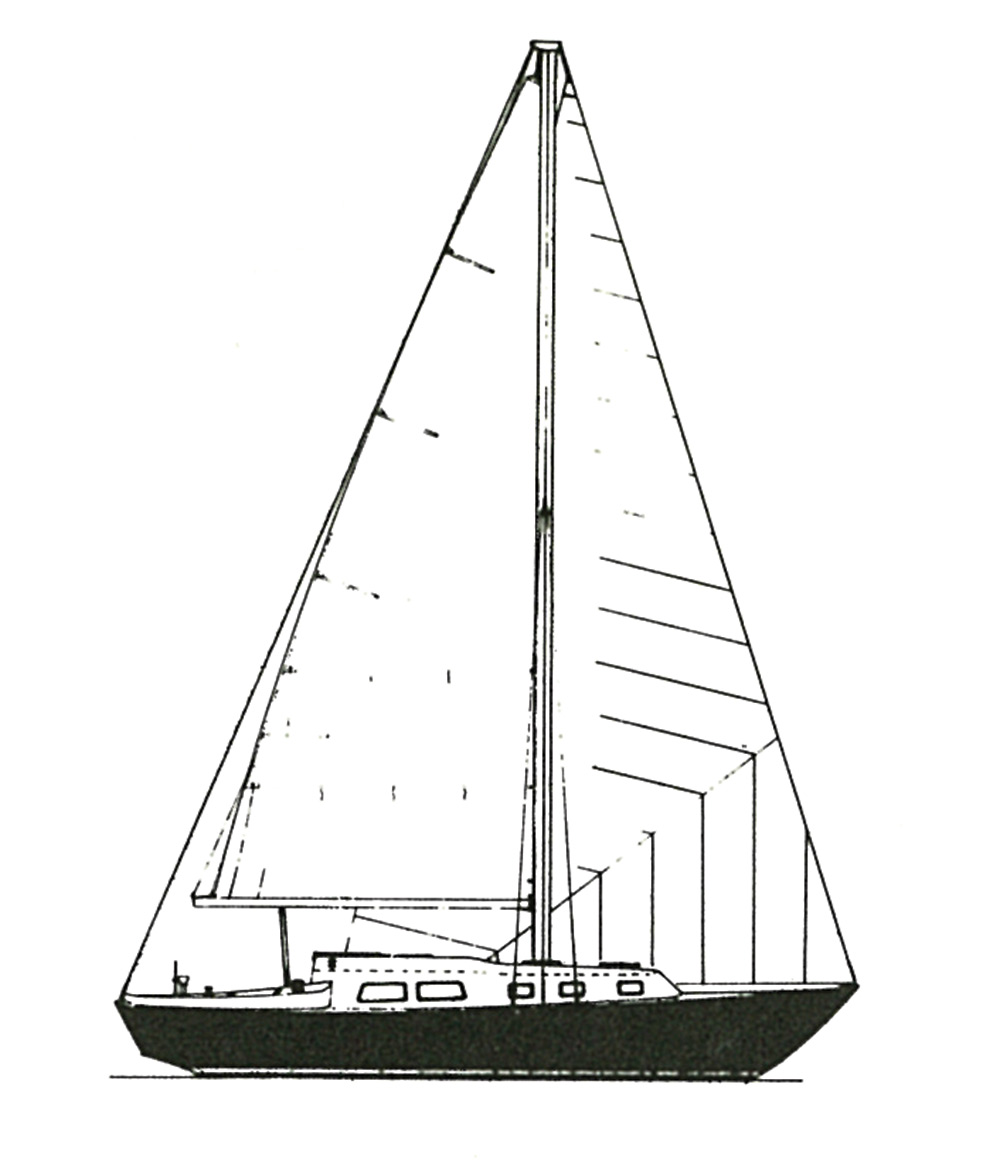 The Alberg 29 was designed by naval architect Carl Alberg and built by Nye Yachts in Canada from 1976 to 1985. The full-keel, masthead sloop was made to replace the much-admired Alberg 30, which had been in production since 1962.

By the time the first Alberg 29 came off the production line, Alberg had designed dozens of successful boats, beginning with Malabar Jr. in 1935. Alberg’s Triton and Sea Sprite, both launched in 1958, were well received and became icons of their era. The still in-demand Alberg 35 followed in 1961.

With such a sterling track record, almost any boat designed by Alberg received acclaim and acceptance, and the Alberg 29 was no different in 1976.

Nye Yachts built 80 of the rugged sloops between 1976 and 1985. The late Alan Nye Scott was at the time also president of J.J. Taylor, the company responsible for producing the Canadian-made Contessa 26 and Contessa 32. Nye Yachts launched the Alberg 34 in 1985, shortly before the business closed in 1986.

The Alberg 29 has proved its mettle over the years. Gordon Applebee, former owner of the Alberg 29 Long Reach, undertook an extensive refit and in 2012 sailed the boat transatlantic from Canada to Europe in a well-documented voyage. The boat has always exhibited bluewater capability.

Potential buyers often ask what makes the Alberg 29 different from other boats designed by Alberg, particularly the Alberg 30. The answer typically leans toward its shorter overhangs, increased interior volume, a keel-stepped mast, and a more modern look compared to the more traditional Alberg designs that preceded it.

Sailors fond of boats with graceful overhangs are often quick to recognize the work of Carl Alberg, and the Alberg 29 is no exception. It has all the features a sailor dreaming of coastal cruising or setting out on longer passages might want or need.

A masthead sloop, the boat looks graceful yet solid, and that’s precisely because it was built for sailing in heavy weather. It appears balanced, with two large portholes on each side of the cabin and three smaller portholes on each side of the coachroof. There’s a sense of composition, style and continuity, unlike some modern yachts, which can resemble a museum of windows. Wheel steering, sensible T-shaped cockpit, bow pulpit, sturdy double lifelines and plenty of grab rails on deck contribute to the boat’s overall sense of capability.

The Alberg 29 was built to exacting standards, and the hull, deck and interior exhibit master craftsmanship. The solid hull is hand-laid fiberglass mat and roving, the deck a sandwich of balsa wood between layers of fiberglass. The boat’s lead ballast is encapsulated. Most fittings are stainless or bronze. The joinery and other woodwork below deck are occasionally described by owners as near museum quality.

Like any older boat, the Alberg 29 can suffer from deck delamination, mostly due to water infusion at the chainplates or where other deck hardware has been attached. After more than 40 years at sea, the boat’s seacocks and other through-hull fittings are likely in need of replacement. If the caulk has degraded at the deck fittings, it may be time to rebed.

Some owners contend gelcoat blistering is common, which usually requires deep sanding or peeling and the application of a new barrier coat. Engine problems often depend on how well the previous owner maintained the machinery. Look for worn belts, brittle hoses, oil leaks and clogged filters, all signs pointing to a lack of maintenance.

The boat has wheel steering so its control cable should be inspected for wear.

The Alberg 29 is a masthead sloop with aluminum mast and boom. The T-shaped cockpit is roomy enough for four adults while the helmsman stands aft of the destroyer wheel.

Double lifelines and a stainless bow pulpit and stern rail suggest safety, as do multiple wooden handrails fastened to the deck. The boat has a cast bronze bow. Cleats and chocks at the bow, amidships and stern are also bronze. The mast and boom are extruded aluminum. The mast is stepped to the keel for strength.

Originally the boats were outfitted with two bronze halyard winches with bronze handles and a pair of two-speed bronze genoa sheet winches. The boat has jib/genoa track and fairleads.

The cockpit shape allows unhampered movement forward by the helmsman when single-handed sailing. The cockpit has large, self-bailing drains and seat locker storage. The galley was laid out for safety. The quarter berth navigation table on the Alberg 29 was new to Alberg-designed production boats. Four bronze-framed, fixed portlights and six bronze-frame, opening ports provide light and ventilation, as does a plexiglass opening hatch forward on the coachroof. The boat has no shortage of ventilation down below.

The cabin interior is teak and oak, with a teak-and-holly cabin sole. Cabinetry and joinerwork is of the highest grade. The forward cabin includes a V-berth for two adults, with shelves, drawers and storage in the forepeak. The cabin has a settee and a double berth. Headroom is 6 feet 2 inches. There is no excess of interior volume for storage or daily living despite the manufacturer’s boast to the contrary.

The galley has a stainless sink with freshwater pump, insulated icebox, and a gimbaled stove with oven. There are lots of drawers, cupboards and a dish rack. The boat carries 30 gallons of fresh water.

The head is located to port with a counter sink to starboard, where it shares space with a hanging locker. The amidships shower sump pump was optional.

The original Alberg 29 was fitted with two-cylinder, 15-horsepower inboard Yanmar diesel with reduction gear, water-cooled exhaust, and control panel that is easily accessible from the helm. The engine compartment is large enough to allow servicing. The boat has a 12-gallon fuel tank. The hull speed has been estimated at 6.3 knots.

The Alberg 29 owners’ association notes the standard design features “a shorter waterline and long counter, which adds speed in both light and heavy air.”  The owners point out the full keel “provides tracking ability and comfort in a seaway, which few other designs can match.”

According to the 1980 sales brochure from Nye Yachts, the Alberg 29 “is a more modern hull with increased stiffness, resulting from firmer bilges, increased beam, and the fact that her fullness is further aft.”

Additionally, “a deeper draft and wider keel lowering the center of the lead ballast by several inches, along with the higher ballast-displacement ration, contribute to the boat’s stability.”

Owners say the bow is finer than on other designs and the keel more cut away, reducing wetting surface. The beamier hull provides comfort in a seaway.

The Alberg 29 is a well-designed, strongly constructed cruising boat that’s rich in craftsmanship and known for its bluewater capabilities.

DESIGN QUALITY:  Carl Alberg designed this full-keel boat near the end of his illustrious career. Like almost all of Alberg’s boats, it offers an elegant sheer, low coachroof and classic sailplan. (3 Sailboats)

CONSTRUCTION QUALITY: The Alberg 29s were built by Nye Yachts in Canada. Robustly constructed, they featured hand-laid fiberglass matt and roving throughout the hull, with a laminate design. The mast and boom are extruded aluminum. The mast is stepped to the keel for strength. (3 Sailboats)

USER-FRIENDLINESS:  Despite the boat’s relatively small size, wheel steering is standard, which many owners contend is a plus when sailing short-handed. Like most Alberg boats, the full-keel hull is designed for a comfortable ride, with a shorter waterline and long counter adding speed in both light and heavy air. (4 Sailboats)

SAFETY:  Heavy-duty hardware and double lifelines, along with nonskid decks, add to the boat’s sense of topside safety. The beam is wide enough to allow for crew making sail changes, anchoring or performing other foredeck tasks. (3 Sailboats)

TYPICAL CONDITION:  Although it was a production boat, it was solidly constructed and carefully crafted, which suggests typical condition will be better than other boats of the same vintage. (3 Sailboats)

REFITTING:  Owners have cut out sections of the deck where moisture was evident. Some rewired the entire boat, addressed engine oil leaks and replaced tired standing rigging.  (3 Sailboats)

SUPPORT: Information and support are available from a website dedicated to the Alberg 29. (www.twentynine.ca). The Great Lakes Alberg Association is also active and there is an annual Alberg Design Rendezvous in the Pacific Northwest. (2 Sailboats)

AVAILABILITY: Eighty Alberg 29s were built by Nye Yachts between 1976 and 1985. Only three were for sale in the United States in late winter and a few more in Canada. It has been noted Nye Yachts began numbering Alberg 29s by starting at 100, which would be hull No. 1. (2 Sailboats)

INVESTMENT AND RESALE:  The Alberg 29, perhaps due to trust in the designer and the builder, continues to hold its value and remains in demand long after the last boat came off the production line. (2 Sailboats)