Mark Wheeler knew that staying calm was key. That’s easier said than done when you’re in 65-degree Lake Michigan with a storm on the horizon, building seas and you’ve just watched the boat you fell off of sail away at 18 knots.

That Wheeler, 64, of Hampton, Virginia, is alive to tell the story of falling off the Farr 400 Meridian X in the Chicago-Mackinac Race and being rescued by the boat after an hour and six minutes in the water is nothing short of extraordinary. 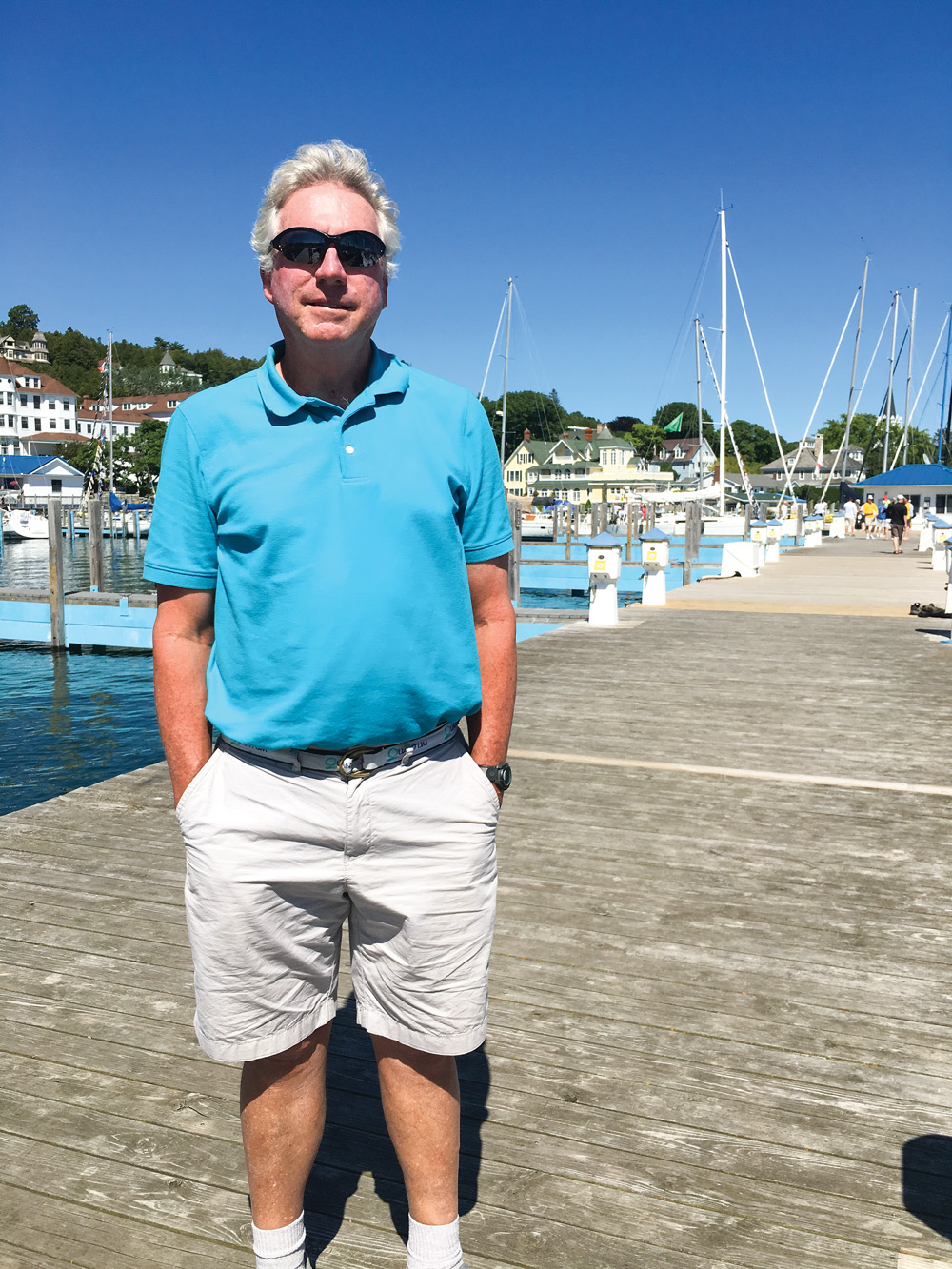 Mark Wheeler reflected on his man-overboard experience on Mackinac Island as the first boats arrived, above
Erin L. Schanen photo
Wheeler, an experienced offshore sailor and the navigator and tactician aboard the high-performance boat competing in Section 2, had just come up on deck during an “all hands” call in building breeze. The boat was sailing with its A2 spinnaker and the crew was preparing to douse at about 11:30 p.m.

He described the moment he fell overboard in a written report: “As I got back behind the wheels, I reached out for the port running back winch. Just before my hand made contact with the winch, the helm was put over hard to starboard to go down with the ever increasing wind. I went over the side head first through the lifelines above the winch.”

Most of the crew was in the back of the boat for weight, so several crewmembers saw Wheeler go overboard, according to bowman Graham Garrenton.

After the crew doused the spinnaker they tried to turn the boat into the wind and were knocked over by a 50-knot gust. The same conditions—outflow from a nearby storm that never reached most of the fleet—were reported by most of the boats at the front of the fleet.

Meanwhile Wheeler watched the boat sail away from him.

“When I first went in, it was quite rough, and with boots and salopettes on, keeping my head above water and breathing was difficult,” he said. “The key to that first minute was staying calm and concentrating on getting the life jacket inflated vs. breathing. I don’t think I could have survived more than 10 minutes without the life jacket.”

Wheeler said he called on water-survival training he received in the Navy as an F-14 pilot years ago.

When he did get his life jacket inflated with the manual inflation pull (he had disabled the automatic function to avoid accidental inflation), he had to hold it down with his arms because he hadn’t buckled it earlier, Wheeler said.

Wheeler was carrying a new ARC-C light with a fresh battery, but the light started faltering almost immediately and completely quit working later. He also had a whistle, a knife and an AIS transmitter. AIS was not required for the race and the boat was not equipped with it, but other boats with AIS or the Coast Guard could have picked up the signal if they had been close enough.

Back on the boat, the crew alerted the Coast Guard by VHF radio, triggered the MOB button on the GPS-equipped VHF and broadcasted a call on the radio that several race boats heard and suspended racing to aid in recovering Wheeler. They did not deploy the man-overboard module at the time Wheeler fell overboard and, according to Garrenton, the crew opted against deploying it later to avoid the distraction of a lighted float that might have been near Wheeler.

Following a reciprocal course, the crew worked the boat, which they estimated was two miles away from Wheeler at this point, back toward the area they’d last spotted him. After about 15 minutes they realized his light might not be working. They dropped the mainsail to hear better, and steered the boat upwind in a search pattern.

“At this point we think we have heard a faint whistle, but it was so far away we are having trouble knowing,” Garrenton wrote in a summary of the event. “We swing slightly to port, then one crew man calls out, ‘Hard to starboard!’”

Wheeler said he saw a masthead light heading for him and getting brighter. “I just wailed on that whistle,” he said.

At nearly the same time, the crew on the Farr 395 Aftershock heard the whistle and shined a spotlight on Wheeler.

Meridian X set up at 30 degrees to the wind, grabbing Wheeler on the starboard side near the primary winches, Garrenton said. The crew used the Lifesling to bring him on board over the transom.

“This was a very emotional event for both the crew and me,” Wheeler said. “We have sailed together many years. When they pulled me alongside there was great relief but still concern. I was worried I might fall through the life jacket at the last minute. I was told I said, ‘That was close. That was close.’”

Wheeler was suffering from hypothermia, and the boat diverted to Muskegon, Michigan, 34 miles away. After a couple of hours Wheeler was warm, up and talking to the crew, and needed no medical treatment on land.