To a Bahamian, a sloop is a type of traditional workboat that morphed into a speedster raced for thrills and prize money. When Prince William and Catherine, Duchess of Cambridge, stopped in Nassau during their weeklong goodwill tour of the Caribbean, they were invited aboard the sloops to try out Bahamian-style sailboat racing. 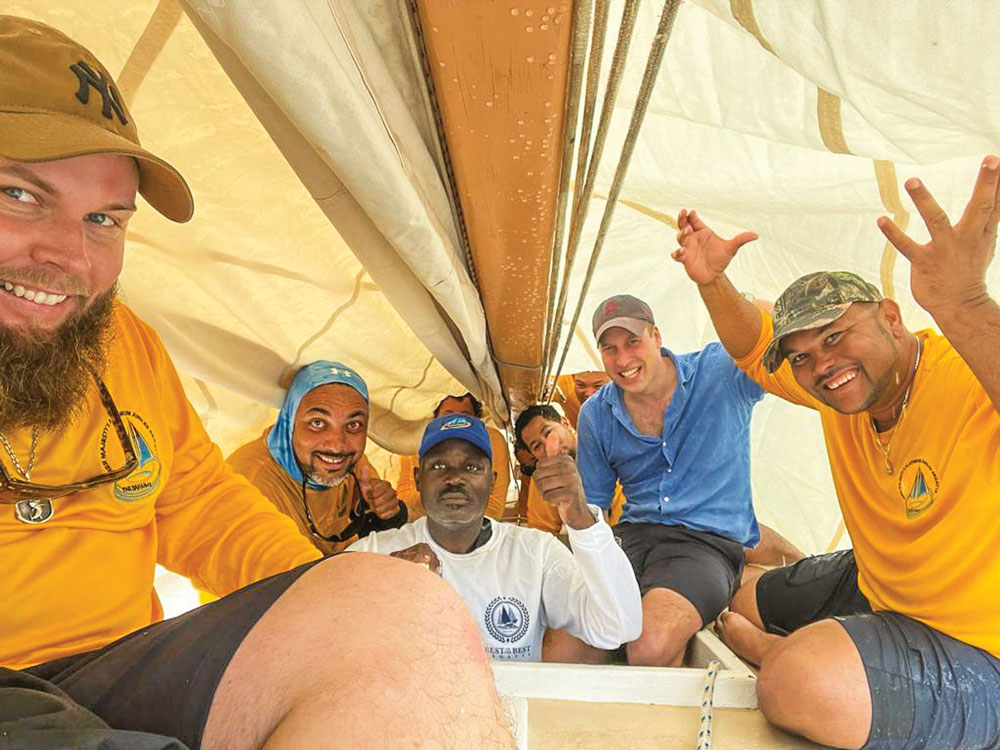 Team Duke celebrates their victory by ducking under the main to get out of the rain as Travis Knowles snaps a selfie. From left to right, Knowles, Ceri, Security, Claudius, Garret, CJ, Prince William and skipper Stefan Knowles.

Sailing is more than an indigenous sport in this nation of 700 islands, it was once a way of life. On the outer islands and small cays, sailing was the only transportation. Now, sloop racing sustains the local culture, and in a nod to changing times, it is replacing cricket, a holdover from colonial times, as the national sport.

Out of this environment, outstanding sailors and boatbuilders developed. With no engines or instruments, the sailors had to navigate difficult passages between the reefs and the islands. Speed was important so that fishermen could be the first boat into Nassau to deliver the fish kept alive in their wet holds.

Sloop regattas began in 1954 when a small group of Bahamian and American yachtsmen conceived the idea of holding races for the Bahamian working sailing craft during the off season, when they were not being used for fishing and transportation. Interisland sailing rivalries emerged in the series of regattas held throughout the Bahamas each year. Boats are built and sailed not using technology, but by people using their hands and their skills.

Bahamian sloop racing rules include provisions that hulls and spars must be made of wood, with sails of canvas or a canvaslike material.  Owners, designers, skippers and builders must be Bahamian. No winches or navigational aids other than a simple compass are permitted. Races start at anchor with the sails down. The only size restriction is the length of the boats, with Class A at 28 feet, Class B at 21 feet and the 17-foot Class C.

The number of crew, mast height, boom length, amount of lead ballast are unlimited. The huge mainsails are balanced by sandbags, lead ingots and crew. The sport remains traditional yet is an adrenaline blast.  As times change and boats are continually tweaked with small design improvements, the sloops sail ever faster. 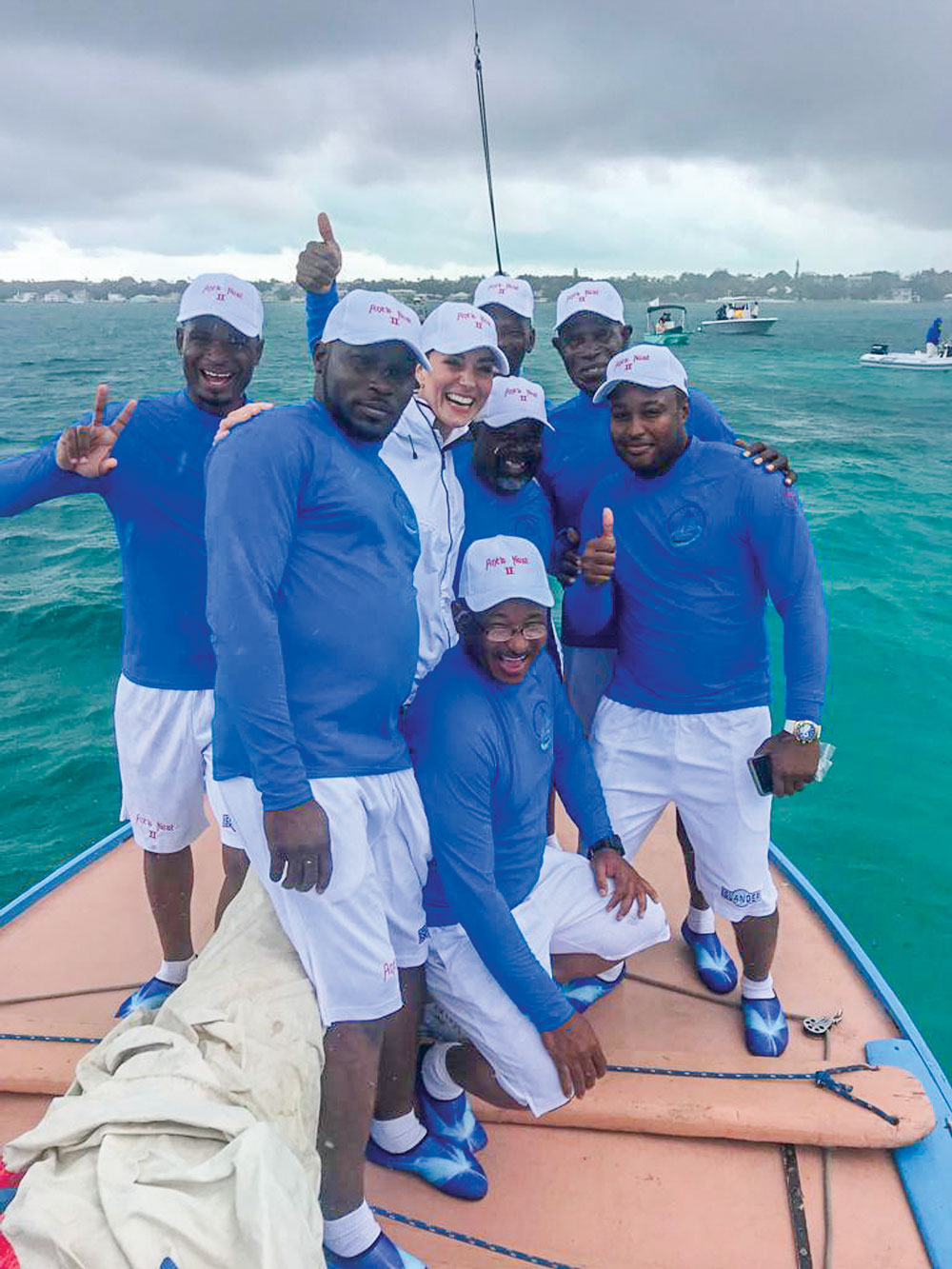 The Team Duchess crew aboard Ants Nest II poses with Kate, who give a thumbs up for a great effort. They are, from left, Keith Rolle, Joseph Brown Jr., Kate, Desmond Pinder, Samuel Rolle, back row Joseph Brown Sr., skipper Lee Armbrister, and James Wal

The sloops are a spectacular sight as crews sit on pry boards held to the deck by large staples. These boards are movable planks extending over the sides of the boats so that crew weight balances the sails. During tacks and jibes, pry crew come off the boards and push the boards out on the other side of the boat. Timing is critical, as there may be 15 to 18 people on a Class-A 2 on a windy day. Pry crew move inboard and outboard as a unit in a sort of big men’s ballet, propelling their boats forward through the waves. Hanging on for dear life, the sailors perch high over the water, feet dangling in the air, with nothing to hold onto but the plank. In the past, extra pry crew were dropped into the water at the windward mark to lighten up the boat for the downwind leg. A rule was passed and now boats must finish with the same number of people they started with.

The idea behind the Royal Regatta was to provide a bit of friendly husband verses wife competition for William and Kate, who have taken part in other sailing events such as the America’s Cup’s Jubilee regatta in Cowes, England. The young royals joined the regular race crews on two separate Class-B sloops. Team Duke sailed aboard Susan Chase V and Team Duchess sailed Ants Nest II. William and Kate both sailed as captains, taking the helm from the usual skippers after the starts. The regular race crew made the boats go fast, trimming the huge billowing sails and performing movable ballast aerial maneuvers on the pry boards.

The couple found the racing a respite from the weeklong Caribbean tour, which was mark by anti-monarchy protests in the former British colonies. It poured rain on the day of the regatta, keeping the international press ashore. It was the sailors who got the best photos of the day taking selfies with the couple. In the end, Team Duke took the win. The 17-foot Class-C Bahamian sloops get set to round the mark.
Jan Pehrson photo