Light air vexes the fleet on its way to Nantucket

We hoped the gale warning forecast was wrong as we set out for the 48th annual Figawi Race from Hyannis to Nantucket on Cape Cod in May. It wasn’t. But my friend Josh Antrim was committed to sailing his Jeanneau 38 Sunshine Alexa from the tiny village of Quisset, through cantankerous Woods Hole, and eastward some 30 miles to the Hyannis Yacht Club where the pursuit race was set to begin the following morning. Josh Antrim steers as his son Ian trims the spinnaker.

To call it a blustery late-May day in New England would be a gross understatement. An east wind blew a steady 30 knots, gusting 35 to 40 as we struggled along under a double-reefed mainsail. It was dark when we arrived five hours later and searched for a mooring behind the jetty. The rest of the crew, Josh’s wife Ellen, their 20-something son Ian and his girlfriend Rosie Samide, and friend Eric Greene, were already at the yacht club’s kickoff party with its lively band, barbecue and barrels of rum. Although tired and soaked from rain, sea spray and a serious pounding, we rallied by downing more than a few IPAs. The gale kept several registered boats from reaching Hyannis.

On race day, a glance around the docks revealed hundreds of limited-edition red Figawi hats, so coveted that race organizers warned of teenagers running through the crowd with intent to steal them right off an owner’s head. Many sailors were clad in Figawi-sponsored merchandise—T-shirts, hoodies and fleece pullovers. The temperature hovered in the low 50s and the fluky wind projection was less than ideal for sailing 30 miles to Nantucket, but the sun was shining amid a promising blue sky.

The fleet was composed of raceboats, cruising boats and fixer-uppers ranging in size from 26 to 67 feet, and not all would finish the race. The crews were just as varied, with pre-teens sharing deck work with octogenarians.

Some of the more competitive crews wore matching black racing togs and resembled nautical SWAT teams. Crews aboard other boats were less-intimidating yet also adopted a color theme, such as the C&C Custom 42 Veladare from the Portsmouth Yacht Club in New Castle, New Hampshire. The boat was impossible to ignore with its crew bedecked in florescent pink. According to skipper John Myles they were about to embark on the boat’s 17th Figawi.

Seventeen years might seem like a strong commitment, but the record paled compared to that set by John Griffin of Centerville, Massachusetts. Now in his 70s and jauntily clad in red foulies, Griffin offered a bit of his personal race history. 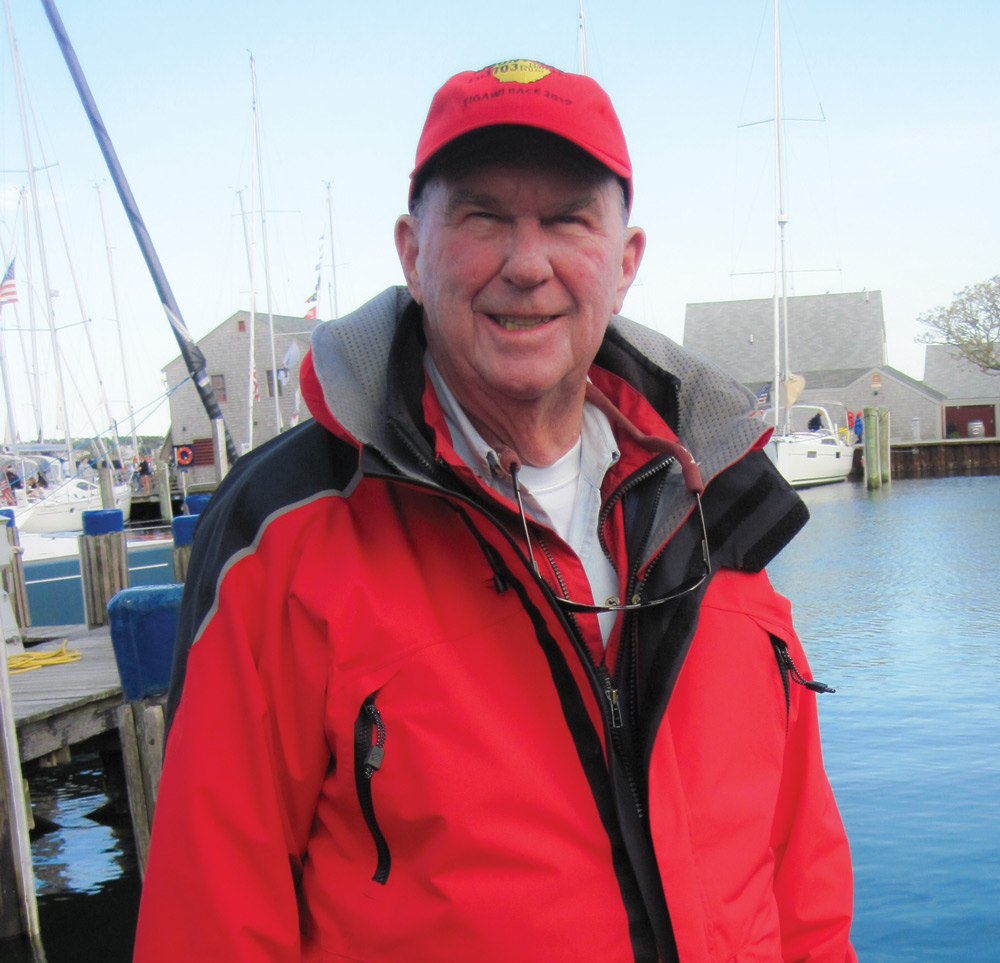 John Griffin gets ready for his 47th Figawi.

“I’ve done the Figawi 46 consecutive years. The first time was 1974. I used to race my own boats, but now I crew aboard others,” Griffin said. “I’ve even crewed aboard, Shindig, a relatively famous Andrews 70.”

The happy and enthusiastic crew aboard Perseverance from the Columbia Yacht Club in South Boston was eager to get started.

“Like the name says, it’s all about not giving up,” said skipper Drew Plominski.

According to his wife Bonnie, their yacht club is “the worst in America east of the Mississippi” and they’re determined to keep it that way. “It’s in the charter.”

On an adjacent dock, wounded warriors wearing prosthetics to replace missing arms and legs were getting briefed aboard the Beneteau Oceanis 45 Perfect Summer that had been loaned for the race. Military veterans typically with little or no sailing experience and their families are sponsored through the Holidays for Heroes organization and Figawi Charities. Bob Solomon, the organizer who served with the U.S. Marines and has sailed 28 Figawis, was busy showing the novice crew how the various lines are used and telling them what to expect once underway.

“These are war heroes. We want to get them out on the water for the experience. They deserve it,” Solomon said.

Inside the Hyannis Yacht Club, the “SeeFest Tribe” comprised of skipper Ira Perry of Padanaram, Massachusetts, his wife Lesley, and their friends and children, were downing a hearty breakfast before the start gun. Ira’s son Sam, 9, was over-the-top excited for his first Figawi.

“I love sailing with my dad and I’m looking forward to having fun,” Sam said.

Perry and his crew were again sailing his J/29 SeeFest and have raced every year since 1998.

Skipper Henry DeGroot and his entire crew of adults and children aboard the Sabre 362 Restless were dressed like the character Moon Dog played by actor Matthew McConaughey in the movie “Beach Bum.” 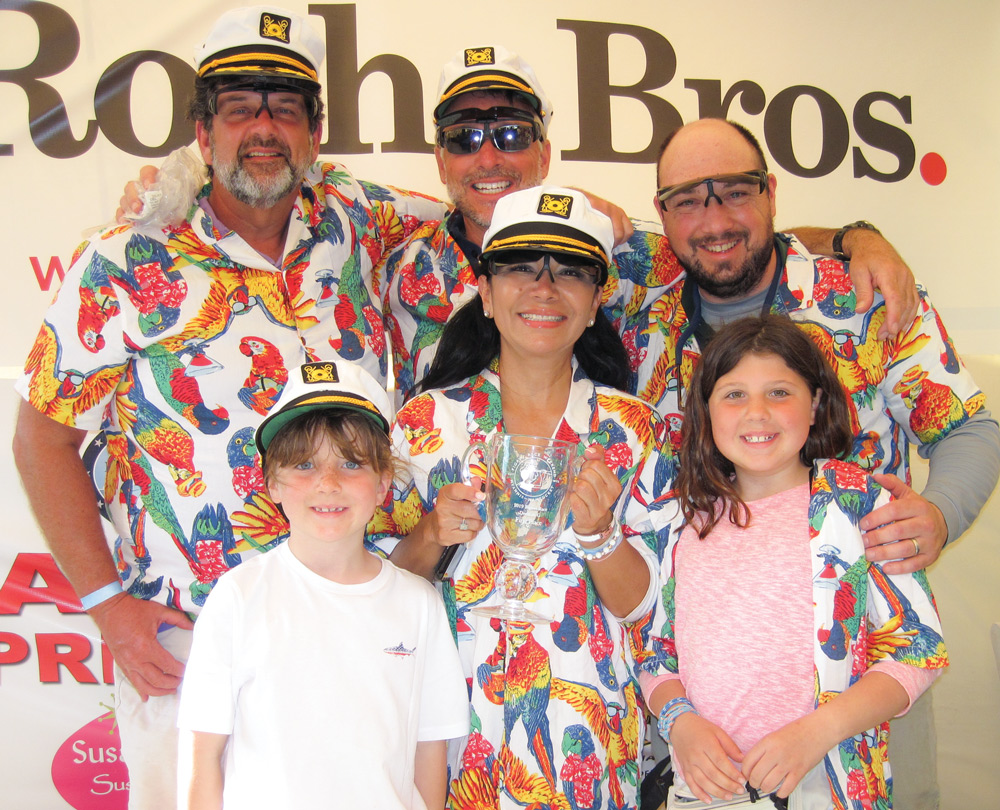 The DeGroot family gathers at the finish in their “Beach Bum” crew outfits.

“That’s what inspired our costumes. The kids really love that movie,” DeGroot said.

Boats participating in the annual parade of sail joined the nearly 200 racers, which were waiting for their appointed departure time determined by division and PHRF rating. In this pursuit race, the starts are staggered so that a majority of boats converge on Nantucket at the same time, making for an exciting finish. And for the first couple of hours, it appeared that’s exactly what would happen, the bigger and faster boats catching up with the fleet’s early starters and in some cases passing them.

But, as though someone flipped a switch, the wind died, leaving the fleet suddenly adrift. Nearby, at least six boats to starboard were banging into each other, the crews brandishing fenders in an effort to reduce damage. Two sailors standing on different foredecks appeared to be jousting with boat hooks and a medley of curses carried across the water. From all accounts, the fleet was caught in a wind hole half way to Nantucket. Eventually the lighter boats were able to move again, leaving the heavy-displacement cruisers to wait for a stronger breeze.

The race committee boat was anchored just outside the entrance to Nantucket Harbor, which is framed by a picturesque lighthouse perched on a curved sandbar. One by one the boats finished the course and found their way to pre-assigned slips in the sheltered boat basin. The island’s downtown—a loose grid of bars, restaurants and shops lining cobblestoned streets that were originally laid in the 1800s—was literally steps away.

Traditionally the Figawi comes alive at the race’s end and the 48th annual was no exception. Cockpits overflowed with food, drink and festive sailors, a disparate selection of music emanating from the boats. Clearly a party was underway, with plenty of children and dogs weaving their way along the crowded docks.

In a wind hole halfway to Nantucket, the crews fend off.

The legend has it that the event began during a rum-drinking session at Baxter’s Bar in Hyannis in 1972. Three friends—Bob “Red” Luby and brothers Bob and Joe Horan­—accepted an informal challenge to see who could sail the fastest to Nantucket. For many sailors, it has become a holiday on par with the running of the bulls in Pamplona, Spain. The histories handed down by reliable and not-so-reliable sources tend to agree those first three sailors became lost in the fog and shouted, “Where the fug are we?”  and the name stuck. Unlike more serious sailing events, the regatta has become known simply as The Figawi, a ritual to mark the start of summer.

Until his death in 2009, U.S. Sen. Edward M. Kennedy of Hyannis, at the helm of his elegant Concordia schooner Mya, was an indelible part of the fleet. On the morning following the race, the docks were brimming with bleary-eyed sailors, many waiting in line for showers or trudging to nearby breakfast joints for coffee and a carb fix.

The traditional Joke-Telling Session under a massive tent was going strong before noon. Sailors took the stage, individually and in groups, to tell humorous tales well beyond the border of bawdy.

Griffin, the sailor with 46 Figawis to his credit, recalled the Joke-Telling Session was once hosted from a wood balcony overlooking the boat basin. It was an open-air, public amphitheater on the water and sailors chuckled and shouted from the comfort of their cockpits. Thankfully, some things haven’t changed. Rum, beer, margaritas and bloody marys flowed generously from open bars inside the tent.

The award ceremony, conducted by international sailing race officer and umpire Tom Duggan, followed as the main attraction in the early afternoon. We picked up a trophy for third place out of fourteen boats in Division H. By our calculations, we came in somewhere around seventeenth overall out of the entire fleet.

The crowd cheered when Duggan announced the special award given on behalf of the late Howard Penn, know affectionately among the regional sailing community as Howie Figawi. Although Penn never actually raced in the Figawi, he ranked among its most fervent supporters for decades. Penn died in 2012 at age 80, but his legacy lives on.

“Howard used to start off the award ceremony by reading the local police report,” Duggan said.  “How much trouble we used to get into!”

Laughter filled the tent, as though affirming the longtime sailors’ oath, “What happens at Figawi stays at Figawi.”

Our crew has already signed up for next year.