Arthur H. Edmunds Jr., designer of the Allied Princess 36 ketch, spent most of his life drawing sailboats. After graduating from the U.S. Coast Guard Academy and completing his military service, the Philadelphia native found work at a shipyard. By the mid-1960s he was designing boats for Chris-Craft, the powerboat builder that had ventured into the sailboat market, where he designed the Cherokee 32, Apache 37 and the Comanche 42 before leaving to open his own design firm. 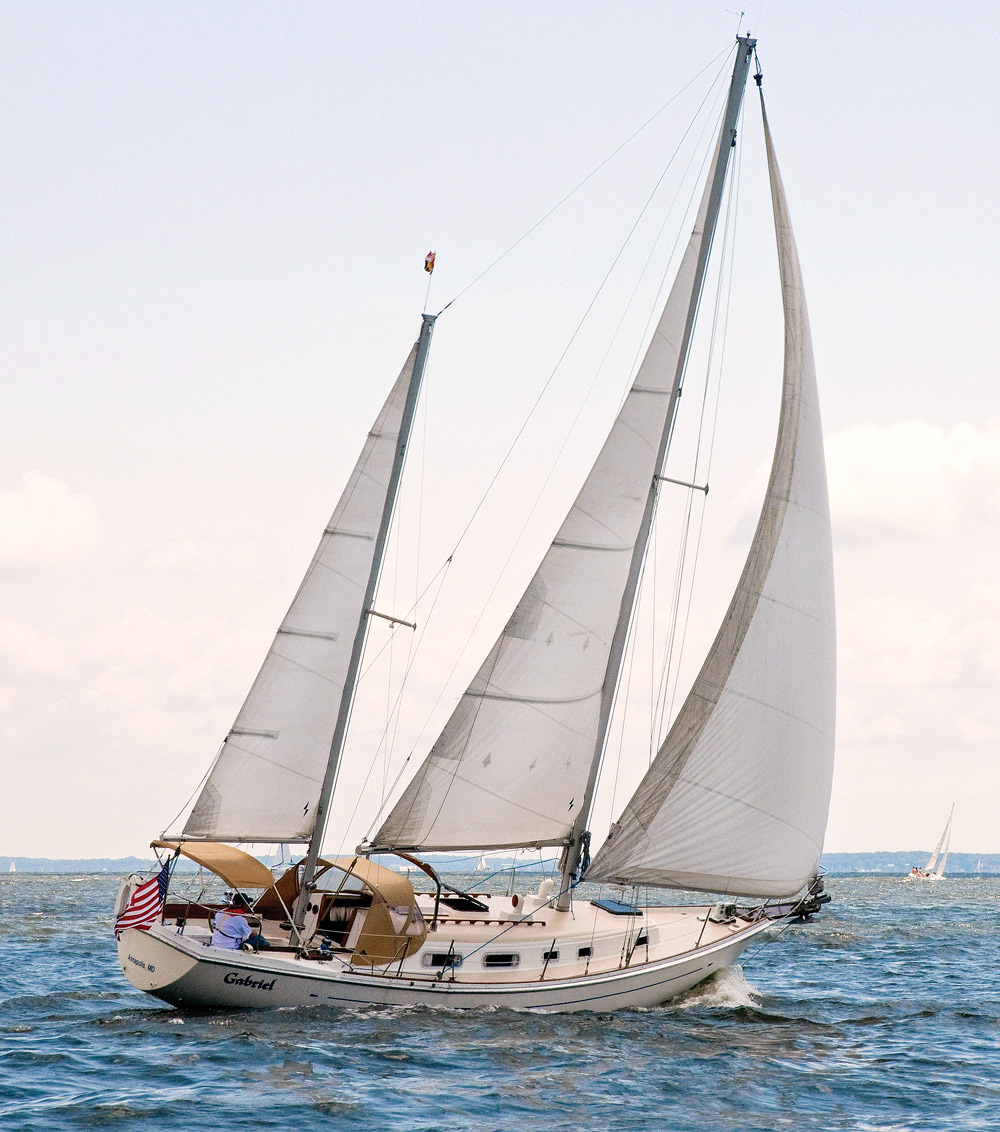 The Princess 36 was designed for cruising and it looks the part. David Humphreys, who sails his 1980 Princess Mk2 Gabriel in Chesapeake Bay, was smitten with the boat’s overall lines and its plentiful rigging.

“I purchased Hull No. 130 after a search to find a traditional cruising sailboat that could go anywhere and was still small enough to singlehand,” he said. “I like pulling strings, so the ketch was desirable.”

Bowsprit, boom crutch and some handsome teak trim added to the boat’s charm, convincing Humphreys to buy it in 2007.

Launched in 1972, the Princess 36 was originally available as a cutter or ketch. It quickly joined the ranks of Allied’s most popular designs, appealing to the growing number of families taking up cruising. A center-cockpit version, dubbed the Contessa, was also introduced, but few were built.

The beamy Princess 36 has a high bow, moderate overhangs, and a shoal-draft cutaway keel. While the boat can travel long distances and in heavy seas, it’s no speed demon and would likely disappoint any sailor intending to race.

The Princess 36 Mk2 was released in 1977 as a successor, but no drastic changes were made. The second-generation Princess features an enclosed quarter cabin for privacy, a bowsprit and additional portals to increase ventilation. In all, approximately 140 Princess 36 and Princess 36 Mk2s hulls were constructed over a 10-year production run between 1972 and 1982.

The Princess 36 was built with longevity in mind. The thick fiberglass hull was hand-laid mat and roving finished off with a layer of cloth. The deck was cored with balsa, a departure from previous Allied-built sailboats made with solid fiberglass decks. The internal ballast is encapsulated lead covered with two layers of mat and roving fiberglass. The bulkheads are tabbed to the hull.

The boat does have a few weak points. The earlier boats had small drains relative to the size of the spacious cockpit. Larger ones were installed in the Princess Mk2. The lifelines were judged too low on the original design, which was also remedied on the Princess Mk2. The original fuel tank, located beneath the cockpit, was made from black iron and tended to corrode. It was replaced on later models with tanks made of Corten steel, which held up better.

The earlier boats had an inadequate 60-amp battery, which was later increased to 90 amps. If the boat has not undergone a refit by now, consideration should be given to installing a bank of three batteries. It should be noted that about 12 of the Princess Mk2 hulls were built with a 5-foot 1-inch draft keel rather than the standard 4-foot 6-inch version. The transom was reinforced on the Mk2, the lifelines heightened, and the cockpit drains enlarged.

Potential buyers should carefully inspect the Westerbeke engine for oil or other fluid leaks, worn belts, smoky exhaust and other telltales of mechanical problems. The earlier Westerbeke engines were underpowered, given the size and weight of the boat.

The cockpit measures 10 feet long by 6 feet wide, which makes it great for socializing, but it’s somewhat oversized in the event the boat is swamped by a wave. The cockpit drains in the earlier boats are small. As a result, any unwelcome water will be slower to return from where it came. A bridgedeck helps keep water from entering the companionway, and the aft seating near the helm provides some additional protection.

The boat has worm-drive steering with the wheel facing forward. For those unfamiliar with the set up, you can’t stand behind the wheel as you might expect. Instead, the helmsman is positioned forward of the wheel, and there is no traditional steering pedestal. It takes some getting used to, but the worm-drive helps keep the boat on track.

“I have left the helm, gone below, made a sandwich and popped a beer, and returned to the helm never touching the wheel as I ate my sandwich and drank my beer,” Humphreys said.

The Princess 36 has five portals on each side, and heavy-duty double lifelines all around. Two dorade vents and an opening forward hatch provide ventilation. The mizzen mast takes up a bit of room in the cockpit, as expected, but owners praise its usefulness. The foresail has roller furling.

The Princess 36 is adequately roomy down below, though not as open as a typical Catalina of the same vintage. Headroom is 6 feet 4 inches in the saloon. Buyers were able to choose from four different interior plans, but some features were common to all, such as the teak sole, wood veneer bulkheads, and settees that expanded into full-size berths.

In some models, the head was simply a marine toilet with a small sink located just outside the door. A shower was optional.

The galley featured a gimbaled stove and oven, stainless steel sink, and an icebox. There was no refrigeration. Although the galleys differed in size, all were located aft to starboard.

The stainless steel tank in the bilge holds 80 gallons of freshwater. The saloon was made in various configurations. Some had collapsible dinette tables to port, while others had fold-down tables at the centerline.

“Sailing characteristics are exactly what you would want in a cruising bluewater boat,” Humphreys said. “She is very stable and initially tender. She then tracks rock steady at 20 degrees heel. Gabriel plows through the chop with ease and does not slow down. She is not slow in a straight line but acceleration is not the strong suit of an 18,0000-pound, full-keel boat.”

Overall the Princess 36 delivers a comfortable ride. Previous and current owners usually agree the Princess doesn’t point high like a boat with a fin keel. But as a cruising boat it shines. With a draft of only 4 feet 6 inches it can sail in shoal waters. And since the rudder is bronze and hung from the trailing edge of the keel, it’s less likely to sustain significant damage if the boat is grounded.

And those boats equipped with a steering vane will stay the course, freeing the helmsman to leisurely take care of other tasks.

PRICE:  The market price for an Allied Princess 36 can range from $8,000 to more than $40,000, depending on overall condition and the year of production since the Princess Mk2 has more value due to design modifications.  Rating: 3 sailboats

CONSTRUCTION QUALITY:  The Princess 36 is a beast in terms of solid construction. While the interior may rely on veneers, the overall build quality was sound. The boat was constructed of hand-laid fiberglass mat and roving with a balsa-core deck. Rating: 3 sailboats

USER-FRIENDLINESS:  Owners praise the boat’s worm-gear steering. “The wheel can turn the rudder, but the rudder cannot turn the wheel. As a result, when you trim the sails on a heading and let go of the wheel with a steady wind, she will hold that heading almost indefinitely,” said Princess 36 owner David Humphreys. Rating: 3 sailboats

SAFETY:  The Allied Princess 36 has earned a reputation for sturdiness and seaworthiness. The roomy cockpit was designed with a bridgedeck, which keeps water from entering the companionway while adding space belowdecks. Rating: 3 sailboats

TYPICAL CONDITION:  Since the boats were so well built, they tend to ward off aging. It’s not uncommon to find a decades-old Princess in excellent condition.  Rating: 3 sailboats

REFITTING:  As with any boat over 40 year old, it may be in need of some TLC. The bilge pump, if original, should be swapped out, along with the water heater, starter motor and the transmission clutches. Owners note a small deck hatch installed over the saloon table would improve airflow.  Rating: 2.5 sailboats

SUPPORT: The Allied Boat Co. was sold several times during between 1962 and 1984. By 1982 the company was defunct. Allied boat owners have support groups online. Rating: 3 sailboats

AVAILABILITY: Of the approximately 140 boats built during the 10-year production run, at least six were for sale in the U.S. during summer 2020 in New York, Florida, Maryland, and U.S.V.I. Rating: 3 sailboats

INVESTMENT AND RESALE:  The original Princess 36 retailed for $26,000 in 1972 and has held or increased in value ever since. Rating: 3 sailboats